This arcane rifle is a legendary weapon created and used by a member of the Order of the Arcane Marksmen as a magical focus to fire ammunition, spells or both.

It is a 4-Shot Lever-Action Rifle, which shoots conventional bullets with an arcane punch.   The barrel, metal firing components, and plating were made from Mythril. The rifle stock and barrel handle were made from the salvaged heartwood of a fallen grand oak tree in Faranthas (Deep Grove) during a rare lightning storm. The arcane carvings were added to the metal / wood to fuse the magical properties of both to absorb the magical focus of the marksman.

This particular rifle was the first of it's kind to be constructed... and may be the last surviving example of an Elven-made Arcane Rifle. Despite it's rather mundane appearance, this very rifle was crafted and wielded by Liandri, the first Arcane Marksman. When it came into the possession of its current owner, it reshaped itself into a form more pleasing and relevant to him. Legends speak of another...
Item type
Weapon, Ranged
Current Holder
Francis "Ironwolf" Christian
Manufacturer
The Elven Kingdom
Related Technologies
Rarity
Legendary
Weight
8 lbs.
Base Price
5,000 GP
Raw materials & Components
Mythril, oak wood, and small amount of the living, grown crystalline substance favored by High Eleven craftsmen. 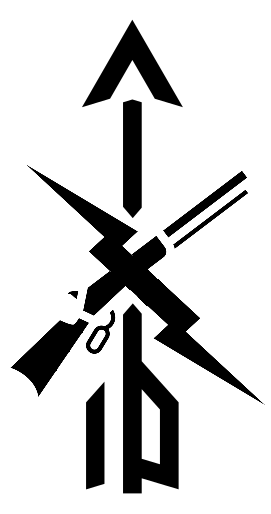 by Christopher Abruscato
"Symbol of the Order of the Arcane Marksmen"