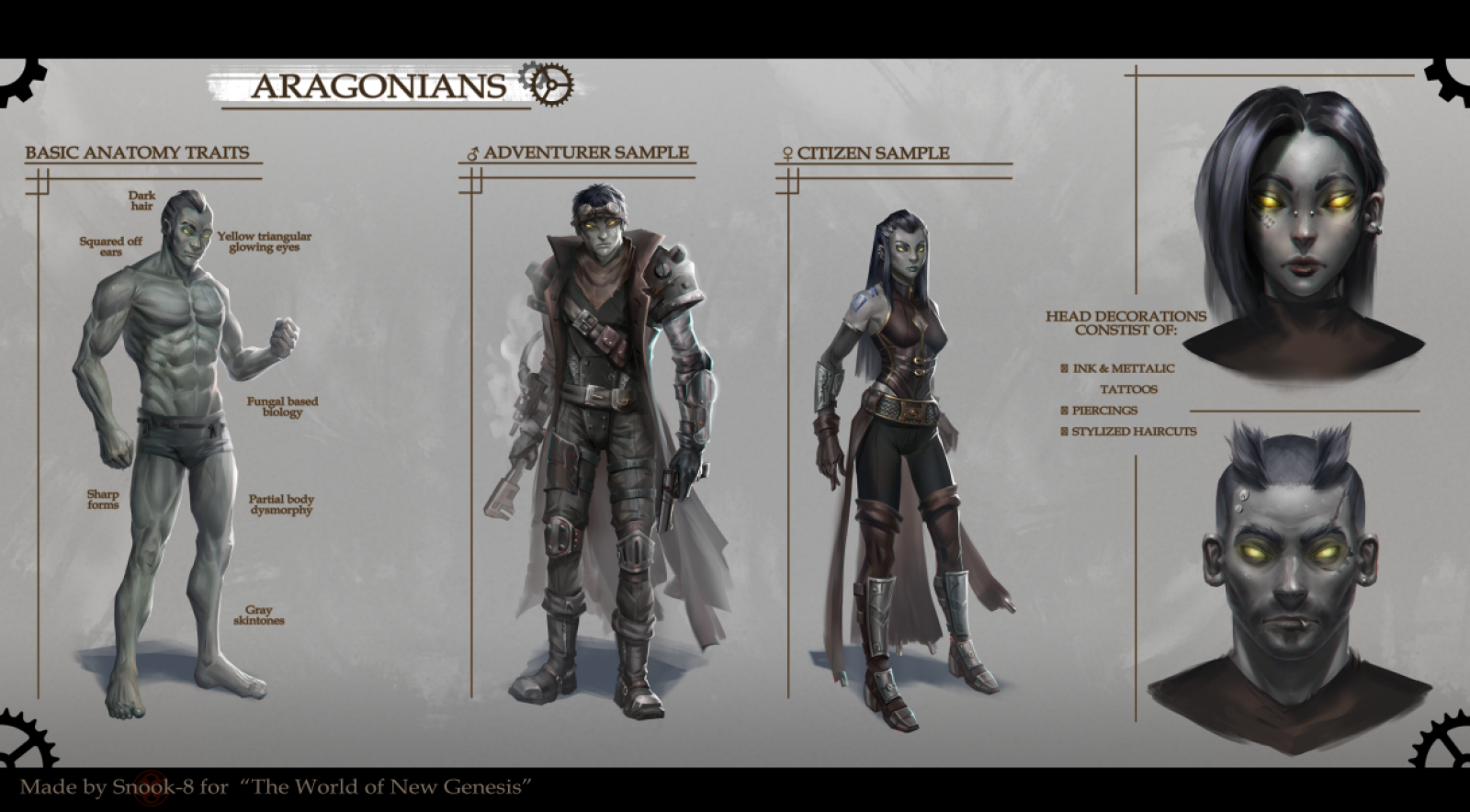 The Aragonians are a practical and logical race. Having shunned magic in almost every capacity, they have built a culture of strict adherence to mechanical logic and scientific endeavor. They are notoriously unemotional, not due to some philosophical or cultural tradition, rather they just simply do not feel the strong or passionate emotions that others races are blessed (or cursed) with. Their quiet, almost sullen demeanor's, black hair, iron-grey skin and exotically yellow, triangular eyes easily differentiate them from the Humans of Terra Main.

Aragonians are introspective, calm and generally unflappable. They are the masters of technology in NewGen to be sure, but their down-to-earth thinking comes with a price: an almost complete lack of imagination. Generations of Aragonians will work to perfect a single device to operate in the manner that it was intended, without ever considering that there might be an even better way for the technology to be utilized in a new way. For instance, the quad-iron pistol was first invented hundreds of years ago and it is still one of the most advanced blackpowder pistol used today. Its design has been refined, some would say perfected, yet its core mechanic has not changed. Although not easily moved by emotional pleas, no one confuses Aragonian stoicism with lethargy or sloth. Aragonians are among the most prodigious workers in NewGen.

Although lacking strong imaginations, Aragonians have a relentless curiosity and a desire to understand the world. This alone can pull an Aragonian from his home and into a dungeon. Ancient treasures and forgotten lore are often what Aragonians seek. In addition, there are many Aragonian mercenaries who sell their formidable skills with pistols and rifles to the highest bidder.

Basically similar to Humans in height, weight and dietary requirements, Aragonians are most distinguished by their raven black hair, grey skin and softly glowing, yellow, triangular eyes. Other, often over-looked physical traits include: squared-off ears, lack of belly buttons, and a lack of nipples on males.  Once every generation or so, an Aragonian is born without any sort of pigmentation. These rare albinos tend to have a slight bluish tinge to their features and hair.

The handful of outsider scholars and sages that have had an opportunity to examine a deceased Aragonian's body describe a physiology not entirely human-like... or even animal-like. Aragonian individuals seem to consist of complex conglomorates of specialized fungi, each taking the role of organs, structures, hormones and bodily fluids. Their bodies contain fungal-based analogs of every normal Human anatomical structure, with the glowing exception of their eyes. Most Aragonians, for their part, dont seem terribly concerned with this revelation, as they still eat, sleep, breathe and bleed, like all of the other Races. This anatomical mystery may explain their innate hardiness and resiliance, however.

Aragonians are easily distinguished from Humans by their triangular, yellow, softly glowing eyes and square-shaped ears. Aragonian hair (or their fungal hair analog) is as diverse as Humans, from thin, straight, wavy, curly, coarse, wiry, or thick. Facial hair follows suite, as well, with facial hair being a predominantly male feature, appearing in all forms described above.

The land of Aragon itself is dark and strangely beautiful. Copses of immense, fibrous mushrooms fill the niche of forests and strange (yet seldom deadly) diseases teem in the humid air. Great basalt and obsidian mountains claw at the sky, usually back-lit in reds and oranges by the numerous volcanoes just beyond them. The climate is generally humid and uncomfortably warm in the summer and misty, foggy and chilly during the winter. The sky is normally dark and overcast due to both volcanic action and the Aragonian cities that constantly belch soot and coal smoke.   First time visitors to Aragos (the capital city of Aragon) are often given blood-red handkerchiefs to cover their mouths and noses which darken over time. These darkened handkerchiefs are sometimes considered symbols of prestige among ambassadors from other nations, as they hint at the amount of time spent in Aragonian lands. In addition to the cloying smog of the cities, the exotic diseases that inhabit this land almost assuredly lay-up the first-time visitor for up to a week. However, once acclimated, the visitor will never again ail from an infection from that particular bug. Reptiles, amphibians and insects can to grow to enormous size in Aragonian lands and are sometimes best avoided.   In the modern age, Aragonians can be found all across the Known World, in almost every role. From Zamber to Southton, from the frozen north to Aragon, these grey-skinned people bring calm and clear thinking wherever they go.

Aragonians are naturally intelligent and educated. They receive a +2 to their Intelligence score. However, they are unemotional and unsympathetic and so receive a -2 to their Charisma score.

Aragonians have the same general sensory capabilities as Humans.

Having no magic to rely on in a magical world, the Aragonians have mastered a number of purely scientific inventions such as the creation of blackpowder, the use of steam power to provide motive force, the routing and burning of naturally occurring gas to provide light and heat and the creation of various gearworks. For the last 500 years, since the time of the great inventor and statesman Moebius, the Aragonians have been augmenting their mechanikal creations with traces of Onyx. With this magical power source harnessed as if it were just another fuel, the Aragonians have been experiencing something of a renaissance of application in the last few centuries.   The use of Onyx in mechaniks was not met without resistance. The Technocracy fought long and hard against the inclusion of any sort of non-mundane materials into the culture of Aragon. It was only after a life-time of diligent (and some would say under-handed) work did Moebius see his goals of Onyx being integrated into mechaniks become realized. Although it was several hundred years after his death when the Technocracy finally acquiesced and adapted the laws to encompass the use of Onyx, it was Moebius who paved the way.   Just because the Aragonian culture had finally accepted magic, does not mean that they indulged into flights of fancy or had a revolution to remake their society to resemble that of the Elves... No, they approached magic as just another natural force to be understood, codified, and exploited for mechanical or practical means. Onyx, as solidified magical power, became just another power source that accentuated and complimented their infrastructure of hydropower, geothermal, coal-powered steam, natural gas, and gearworks.    Pulverized and specially treated Onyx dust was turned into fine, thin glowing 'traces' that could be embedded into objects, powering and 'programming' them to perform certain actions, with a modicum of magical understanding of given commands. This further made Aragonian society a model of efficiency, freeing up even more time for them to experiment, refine, and expand their technological knowledge. Despite the Technocracy's reassurances, the concerns of relying on something as ineffable and unpredictable as magic have risen in Aragonian culture. Some alarmist groups even warn of this magi-tek eventually turning on its creators, or other equally dire consequences.

Aragonians speak their own language, Aragot, and Common. Aragot is a clipped, literal and sparse language that has few words for esoteric concepts. Any philosophical debate or expression of emotion is better conveyed in another language. Aragot is one of the easiest languages to learn and is often learned by Humans who fancy mechaniks.

Aragonians favor dark, rugged clothing, often accessorizing with riveted plates of light-weight darksteel around the joints and shoulders. Aragonian hairstyles are often indicative of the individuals profession. Smiths tend to shave their heads, while those in the military shave and shape their hair into multiple vertical or horizontal bands. Aragonian women usually wear their hair long and straight unless that is impractical for whatever reason. Tattoos and decorative metal piercings are becoming more popular, especially among young Aragonians and travelers abroad.

Aragonians have a strong streak of neutrality about them. An individual with a chaotic alignment, besides being quite rare, is generally considered mad and is usually ostracized by her brethren.

Naturally a literally minded people, the vast majority of Aragonians hold no reverence for a deity; their science and technology provide them with the greater meaning and comfort that most other races gain through their religion. Although not truly a religion, all Aragonians believe in the concept of "Providence", which is a mix of luck, timing, destiny, and karma that they believe shapes their lives. Although they acknowledge the effects of Deities on the other Races, they see the Gods as simply being creatures of immense power... not entities that deserve praise or worship. That time could be better spent doing something to improve the immediate world, they feel.

Unobtrusive and generally quiet, Aragonians are welcome in all of the nations on NewGen. Only the Golden Gnomes have a instinctual distrust of Aragonians, seeing them as being wasteful, disrespectful of the natural world and having no reverence for the spiritual. Humans tend to see them as equals, if only a little lacking in the humor department. Zamberians greatly enjoy Aragonian technology and wish that it could be put to more grand uses. Of all the Races, it is the Aragonians that the Elves pity the most. What is even the point of existing if there is no magic to enjoy? Dwarves enjoy working alongside Aragonians; they're like Humans, but without all the chaos and constantly changing culture.

Scientific Name
Homo Intelligentes
Lifespan
80 years
Average Height
5'5"-6'3"
Average Weight
100-200 lbs
Average Physique
Aragonians are naturally hardy and have a unique physiology. They receive a +2 to their Constitution score.
Body Tint, Colouring and Marking
Aragonians range in shades of grey, from so pale as to appear ghostly, to as dark as charcoal. Their hair is almost always jet-black, but some bleach and dye it in more vibrant colors. Tattoos and piercings are popular amongst the more fringe members of Aragonian society.
Related Ethnicities 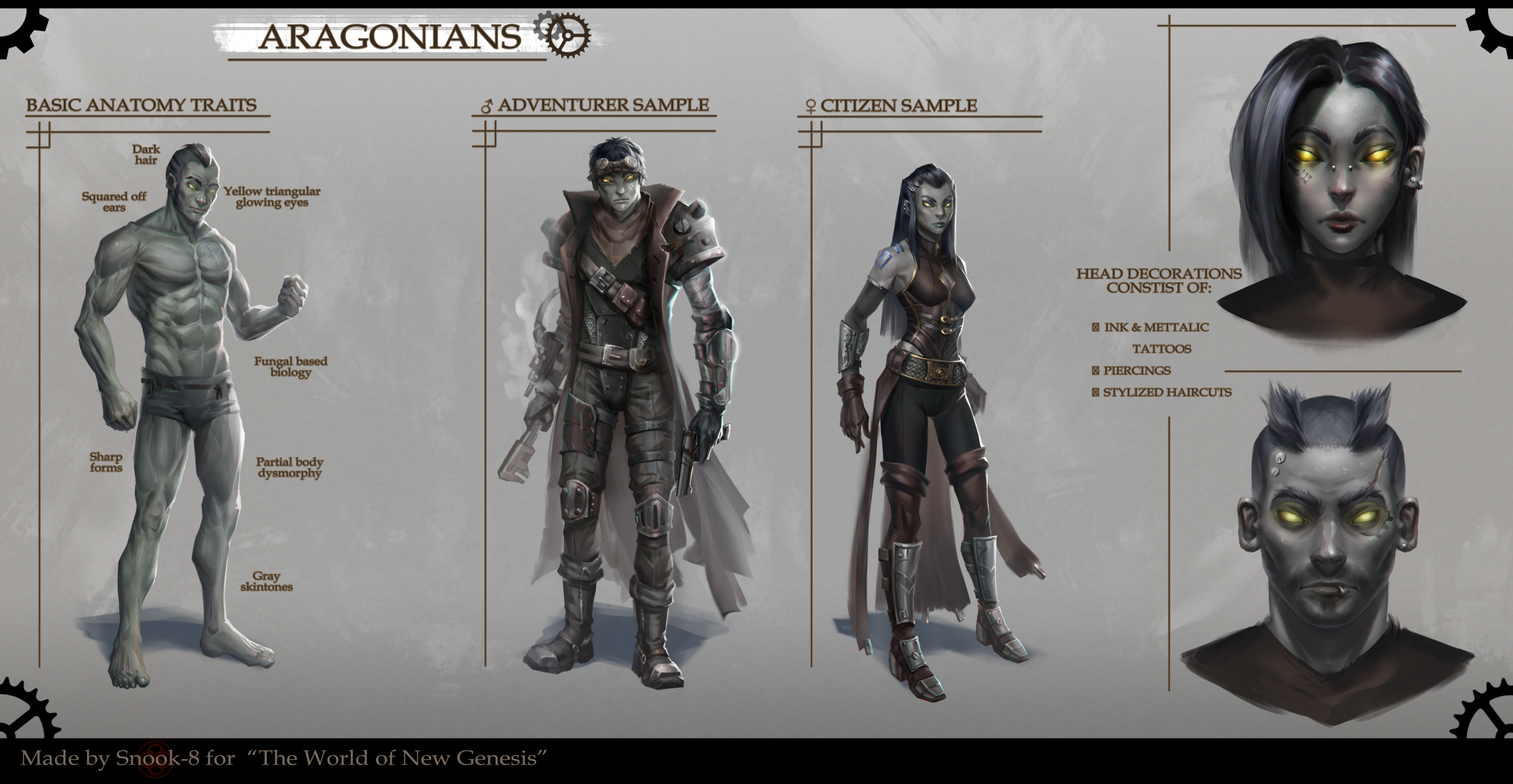 Aragonians are resistant to poisons, due to their unusual physiology. They get Advantage on Saves vs Poison.

Aragonians automatically get Proficiency with Firearms at 1st Level. 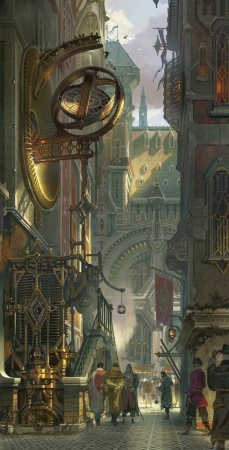 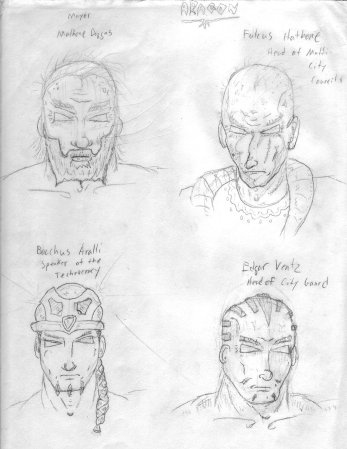 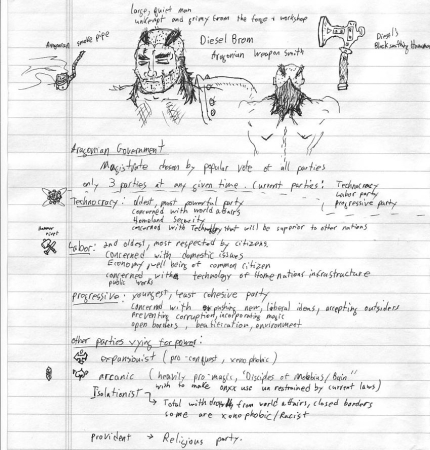 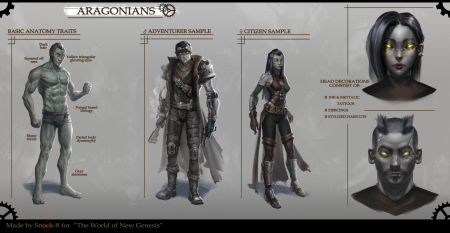