Ángel is a tall and lanky boy with a fair amount of muscle. He's from the school of hard knocks, and while he does a fair amount of weight training, most of his scars and mass come from tussling on the streets.

Surprisingly enough, Ángel has no piercings or tattoos.

In his early teens, Ángel found himself able to manipulate the emotional neurochemistry of people around him. While he can use this to calm people down, he found it an effective weapon to ignite violent fear in those who threatened him or his people. In both cases, he is always percieved as the source of the threat or calming nature.   Although he has no formal education outside of some high school, Ángel is a smart kid and once his shift emerged he engaged in a thorough study of psychology, especially psych-op war tactics. He's amassed a through libarary of ways to traumatize his foes with verbal and visual queues.   The rookie way to use his power is to scare them once, he seeks the longer strategy of scaring them forever.

Terrador fights crime dressed in an armored Día de los Muertos mask and sleeveless flak jacket. Both are brightly colored and he changes the style often to fit his mood. He wears a simple black bodysuit under this, with skeletal appendages painted onto it. His wraps his hands like a boxer with white bandages so they stain with blood during a fight. Around his waist he wears a leather gun belt with a revolver, and over his back he has a metal baseball bad and a machete hung akimbo.   During his mundane life, Ángel dresses to impress in an almost exagerated gangster style. Black suits, loud shirts with broad collars, lots of gold chains and jewlery. He is rarely seen without a cigarette, and keeps one behind his ear out of habit which he never smokes. He lights these with old school matches which has prepped so he can light them with a flick of his finger.

Ángel grow up, like most in the Canyons, dirt poor. Abandoned by his parents for unknown reasons, he was raised by his aunt and uncle. His aunt was a victim of Saunter's Syndrome, and as such never had children of her own. As she began to decline, his uncle became a violent drunk, often taking his frustration out on Ángel. Around the time his aunt passed away, the boy's shift started to develop. Shortly after his uncle was found dead of a heart attack. Not interested in social services, Angel took to the streets to find his own way.   Concealing his abilities, Ángel ran as a courier for Las Plagas for most of his youth. Given his natural abilities, it wasn't hard for him to move goods or messages without being challenged. The work paid well, and it seemed like a good way to stick it to the megacorps who fed off the decaying bodies of the underclasses. Everyone knew him, they asked for him by name when something important needed transit. He rose rose to the rank of Enforcer in the organizatin: he was smart, able, and ruthless. Leadership liked his style. But from within, he witnessed the brutal tactics and exploitation that the gangs utilized to retain power. He witnessed families like his own drained to the bone then thrown away to fight over scraps. The gangs were untouchable, just like the megacorps, and their privilege shielded them from the suffering happening beneath them.   So Ángel donned a mask and costume, themed to the Day of the Dead, to help them remember those who have died to make them rich. To bring fear into the hearts of those bastards.

Ángel is infused with machismo, but it doesn't seem to limit his choice of partner. He finds those who find him sexy, sexy.

Ángel wasn't a half hearted gangster, he threw himself into it and did some real bad things. He pretends like it was all part of 'you can't make an omlet without breaking some eggs', but he is actually quite ashasmed of those things, and will become uncharacteralistically quiet when confronted with them.

Traumatized by the beatings by his stepfather, Terrador can becomely uncontrollably violent when faced with the mistreatment or expoiltation of children.

In modern society, Terrador knows the dicotomy of predator and prey still exists. The people of the streets always find themselves at the bottom, with the gangs believing they are only predators. He intends to make himself as the percieved alpha threat, to terrify the gangs into leaving the innocents alone.   Ángel believes the ends always justify the means.

Ángel hates organizations, he feels they exist to pull the wool over your eyes so those at the top can amass power. He is quick to point out any percieved of abuse of power, and will more often than not jump to conclusions. He thinks power comes from the streets, from individuals.

Ángel's Aunt tried to raise him Illuminate, he thinks of her fondly and can sometimes he found uttering simple prayers to St Anastatia when he particularly shook.

Ángel thought he had amassed a good chunk of change with Las Plagas, but it went quickly when he turned on them. He tries to maintain the appearances of being a flashy gangster with some success. 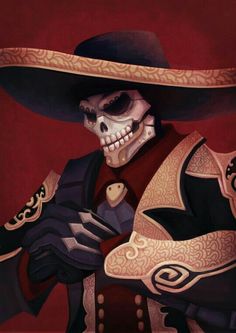