A defender of the people Alessia is. A source of food and life and strength Alessia is. An awe-inspiring expanse of sea Alessia is. A place for your unholy smoke-belching machines Alessia is not.
— Elder Qin of the Kalian League

The Sea of Alessia is a large ocean to the south and east of the continent of Zentland. A vast expanse of open water, Alessia was not thoroughly mapped by halorin until the time of Kaimi the Navigator (~900 BP). For the Brown Halora, it serves as a land of mystery, with many mythical lands allegedly located "South of Alessia". 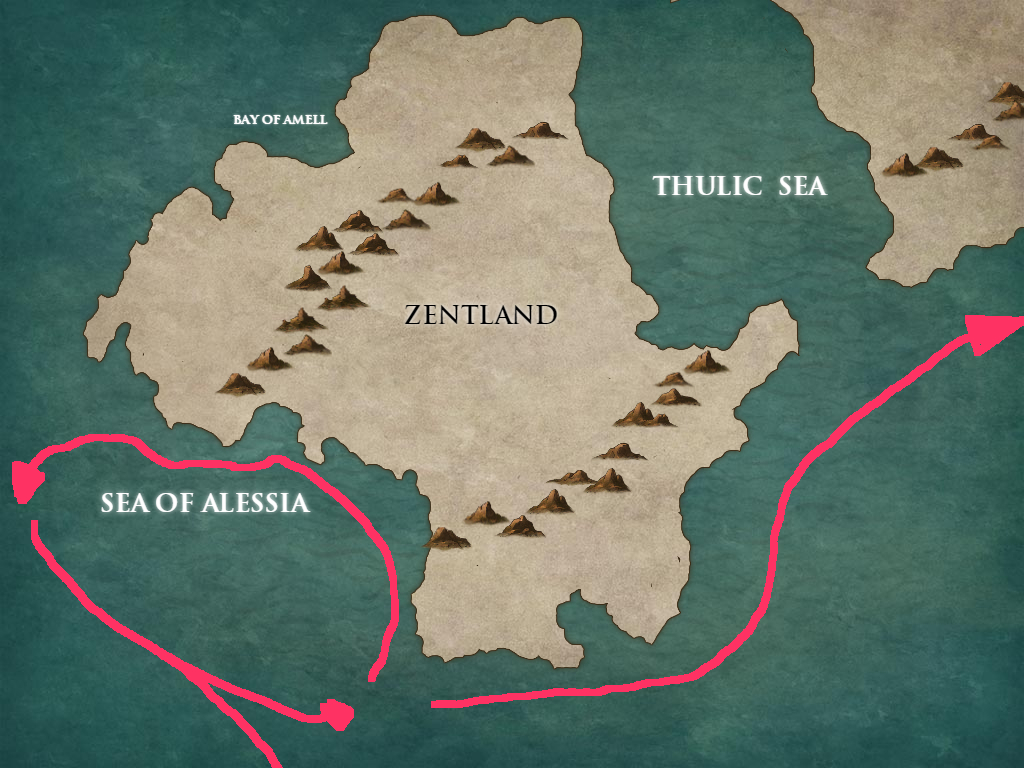 Currents of Alessia by ElementalShrike
The Sea of Alessia is a vast, unfeeling expanse of water. At first glance, it has little to distinguish itself from the surrounding waters. However, it does contrast strongly with the oceans beyond, in terms of the motion of water currents.   Of these, the North Alessian Current, also known as the Alessian Stream, is the most important one. Highlighted in red on the map above, the current moves rapidly along the south and east coast of Zentland. The most valued natural resource provided by the Sea of Alessia lies in its seafood. It also provides a conduit for trade, allowing trading ships to rapidly complete a circuit along its namesake "loop".

I traveled up a large ridge, to stand at the top of cliffs overlooking the sea. I did a traditional meditation: flying up to the massive Turrim, alighting on one of its tallest branches. What I saw, of the vastness of the land and sea, put me into my place. I realized just how painfully insignificant I was, in the grand scheme of things.
— Darian, after his visit to the East Bay

The most important natural resource provided by the Sea of Alessia is the fish provided by its currents. In the present, over one hundred thousand tons of fish are caught along the coast of Zentland, and another fifty thousand tons on the Aurinor continent to the north.   There are also energy resources in the sea. Currently, the Alessian stream was also used as a renewable power source, generating enough electricity to power the entire region of the Salt Plains. A push was made to start drilling for the region's vast oil reserves, but was blocked by the elders of the Kalian League.

They sailed south, far south on that Endless Sea...
— North of Nysa, prologue

Alessia is often described in literature as a land of vastness and mystery. In several myths, a land known as Nysa is south of Alessia, a place halorin go after death. Nysa is invariably described as beautiful and elegant.   Due to Alessia being so unexplored and mysterious, however, many writers simply use the term "South of Alessia" or "North of Nysa" to refer to an imaginary place, where their tales take place. An exemplary tale is the epic North of Nysa, a poignant poem about a king in search of a land for his people after being expelled from paradise.

The Grand Reef is one of the most biodiverse areas of the Sea of Alessia. The Grand Reef is a large barrier reef, formed around a large southern island of Alessia. Before, when the planet was heavily glaciated, the island was attached to the Alessian mainland. When the glacier retreated, it cut off the island from the mainland, which became fringed with a reef in a more tropical time.