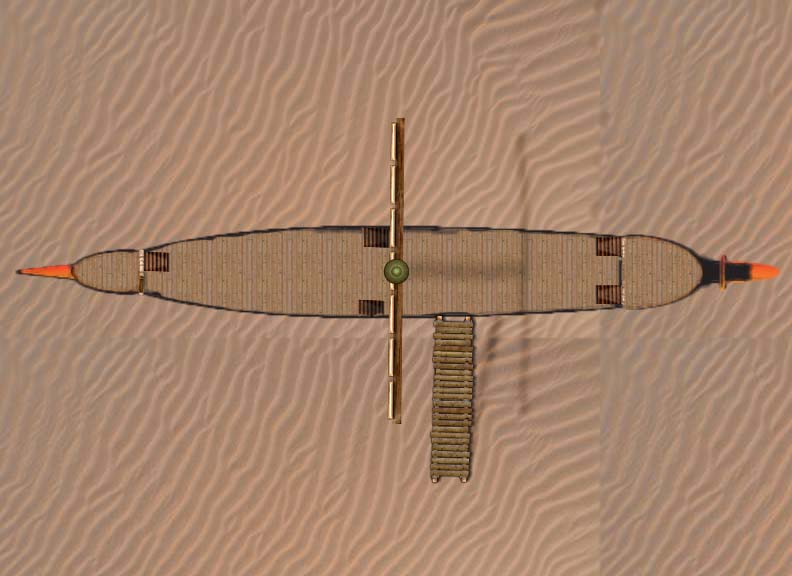 The Sahara Rose is a unique ship, being so far the only Sun Barge found. The tomb walls show pictures of the sun barge with the Pharaoh on board in a scene of conquest. But it was assumed to be a sea vessel given that the canal would have connected to the sea if the Stygian delta didn't fill it with sediment. After seeing the craft during the day, the Bonekickers came up with a new hypothesis: During the First Age of Khemit, after the exodus of the gods, The Great Sand Sea formed to the west. While there was an migration of Khemitians to the fertile lands on the eastern side of the kingdom, there must have been a few stubborn Khemitians who found a way to quickly travel through this desert landscape. How many ships sailed the Sand Sea is unknown at this time and does bring new theories as to battles between the Ancient Khemitians and the Omaruri. 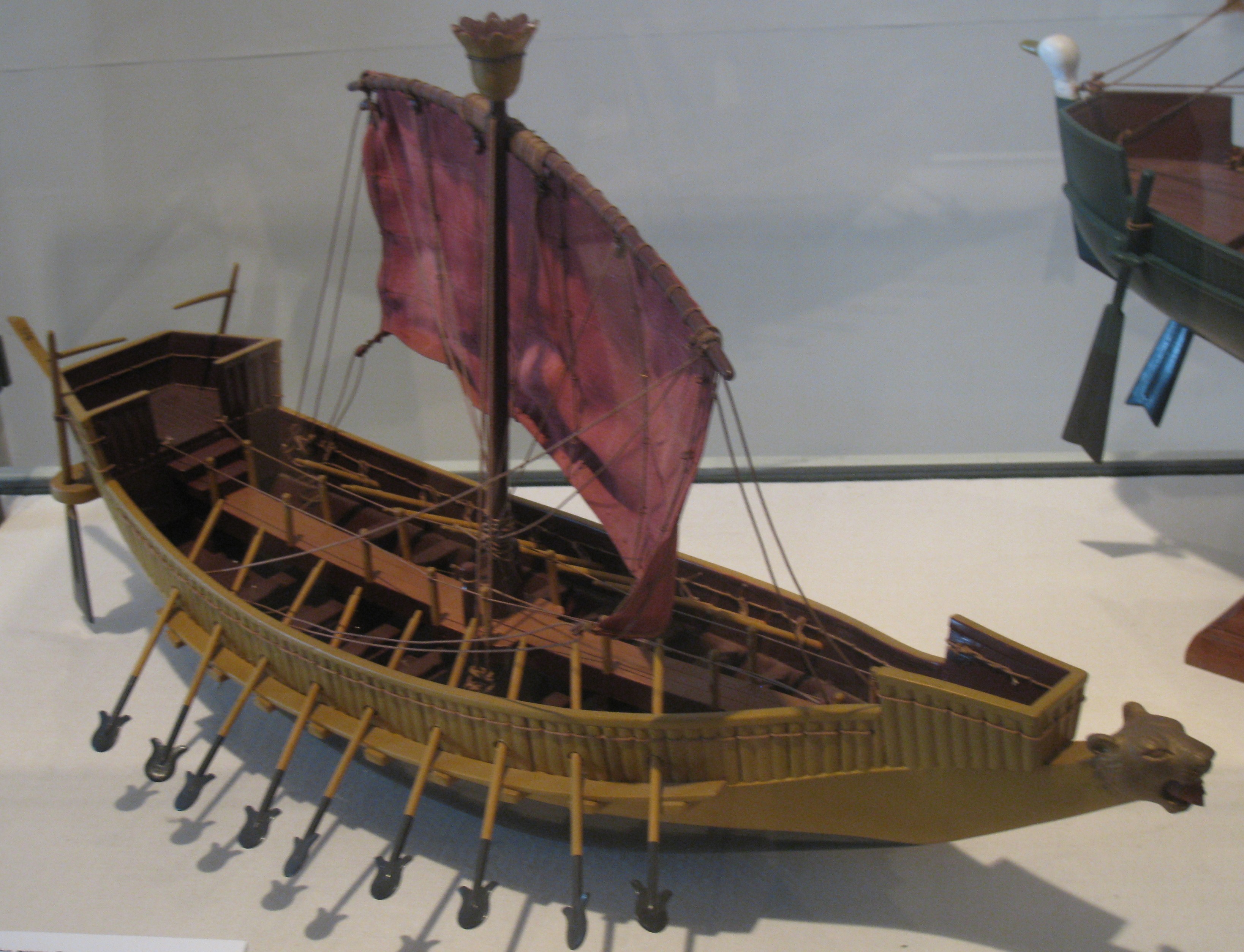 Discovery of the Sahara Rose

When searching near Talam-Quedish, Bonekickers found an entrance into the hillside and it was the Tomb of Pharaoh khufru, from the Ancient Khemetian period, roughly 4,000 years ago. It was odd being so far from the more documented Valley of Gods, where many of the Pharaohs were buried. East of the Tomb was a sand filled canal leading to another large subterranean chamber. Opening the chamber, it was discovered a ship, nicknamed by the workers, the Sahara Rose. It was believed to be both a gift to the gods, and the personal transportation of Khufru through the afterlife. the preservation of the ship is astounding with the wood being in great condition.

When the stones above the ancient canal were lifted and the morning sun shone upon the Rose, its sails unfurled and it exhumed itself from the sands of time to sail once more...
— Bonekicker Bakmose

Dimensions of the Sahara Rose

The Classification of a Sun Barge is only based on the Sahara Rose and comparison to other recovered Ancient Khemitian ships. It's of advanced shipbuilding technology as our current Triremes with 70-ton displacement. From port to aft it's 15 feet across with a length of 120 feet including the brass ram. it has a flat bottom, traditional for a river barge of that period, but beneath it is a shiny orichalcum (A stronger bronze mixture) fin.

There are two upper decks, at the bow and stern. The narrower bow deck has placement holders for shields along the rail, and blocks for holding spears. The wider stern deck has fewer placements and a unique helm with two levers for the special propulsion system.

The main deck is sparse, probably used for a mixture of crew and cargo. Along the railing are longer poles and rings for putting up tents for shade. A few metal stands for raised firepits are stacked near the bow. 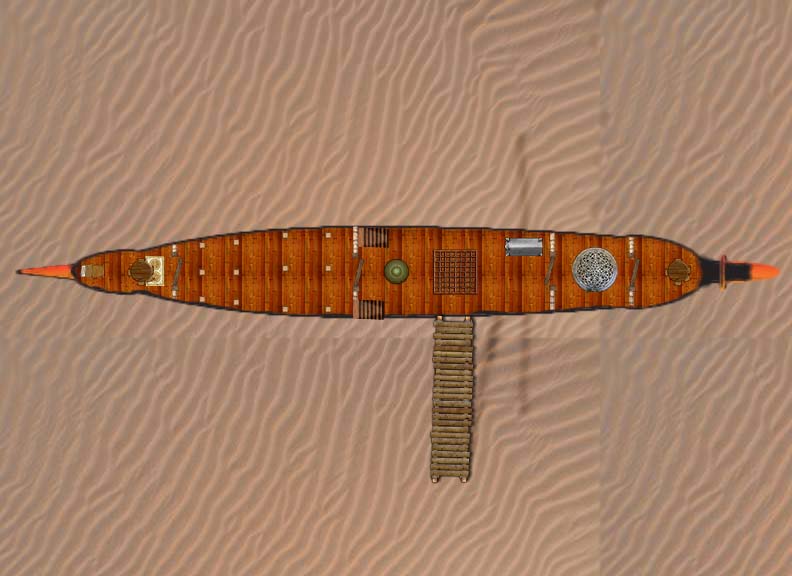 Where the crew with oars would sit has been replaced with rooms for cargo, crew, and a room of gears and other moving parts that we are calling the engine room. Large doors between bulkheads can be opened creating one large space. The crew room contains mostly posts for hammocks and stools. Maybe a dozen men could sleep here. At the bow is another private room behind the crew quarters with a similar room in the stern past the engine room, though this one contained just a table and chairs. It may be a multifunctional space. The cargo room is of decent size with a large trap door above to the main deck and a door in the aft side of the ship with the remains of a gang plank.

When we entered the cargo room, it contains a few ropes, slate, and timbers in case of repairs. towards the back was the bigger surprise with a marble sarcophagus. It was empty and no values expected in a tomb were found. We aren't sure if looters got here first as there were no signs above the tomb. It may have been prior to the ship being placed here that the treasures were stolen. The inscription is to the captain Potiphar of Khufru's ship. Hope he doesn't mind us being here.
— Bonekicker Jeth

The Engine room is a mixture of gears and Words of the Gods etched in metal. it filled most of the room with a central shaft connecting to the fin below. the floorboards are interrupted by a series of copper and Gold pipes connecting the whole contraption together; engine, mast, helm, without becoming a trip factor for the crew. An amazing engineering designs.

We wondered if you prayed in the Engine room or tinkered in it to make the Rose go. Incense, tools, and oils were left here. Even a few prayers were carved into the floor. The prayers were an amusing mix of swearing and instructions for whomever maintained the craft.
— Bonekicker Jeth 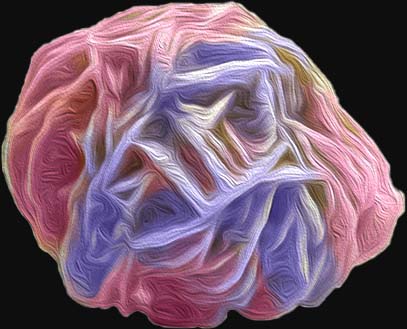 Below the upper deck, the Stern Quarters is a large opulent room. It is assumed to be for the Pharaoh When the Rose was discovered, there were the remains of a bed frame, carpeting, and some personal affects. The small windows contained stained glass, one in the pattern of a gypsum rose (Hence the name).

The bow quarters had less opulent furnishings and a desk we assume it's the captain’s quarters when the Pharaoh is aboard, but there were no nautical instruments or maps that would have greatly benefited the research. It may have been buried with the captain. scraps of parchment found in the closet lean towards the last occupant being of a religious nature, maybe a Gaffe. Unfortunately, not enough to know the last destination before being buried with the Pharaoh. Perhaps the Gafffe was here to give last blessing over Khufru before sealing the Tomb.   Main Deck and Quarters 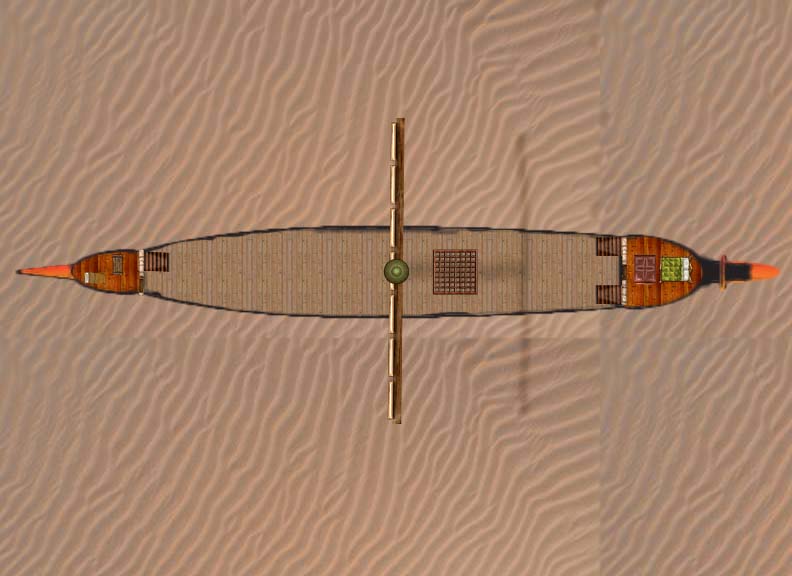 The sails of the Sun Barge are woven threads of gold and glass; an extremely challenging work. While the Gods may have known how to create threads of glass, it's been lost to the ages. only the technology of creating threads of gold remains because of it's inherient value to man. The great sails glow with the energy from the sun as it channels that lumious power down into the bowels of the ship.   The sails only power the ship during the day, At night there is a place for a minature version of the Obelisk of Black Sand. It's not enough to power mobility, but does give some power to other mechanics if we can find them.

the Sun Barge rests its keel on a large segmented Oricalcium fin. When powered, the fin hums as it vibrates, generating lift out of the sand. The ship, 2 meters above the sand, can move with less friction against the scouring sand. the various segments of the fin can alternate vibration from the core of the fin to provide movement through the sand like a snake. this propulsion is controlled by wheel and levers.

There is an upper deck on both the bow and stern of the ship. From there, it's assumed to be a high enough vantage point for archers and spearmen. The prow has a large bronze ram, also assuming to ram other ships, but since it's the desert, we may hypothesize that it could be used for ramming walls and other fortifications.

While primarily made of wood, a sunbarge has layers of 3 foot slate scales. Each scale was pegged into a latice on the outside of the hull to make it easy to remove broken scales and replace them with new ones. They are not strong enough against many bludgening attacks, but they do protect the ship from sandstorms and other hazards that would eat into the wood or the flames of intentional fire. The Sahara Rose is very fast and nimble out in the Great Sand Sea. In combat she could could take advantage of that with quick manuvers that would evade the enemy's arrows and spears.

The first time we took the Rose out of the canal, it was magical. the fin sliced through the earth barely leaving a mark, thumping the edge of the canal before hopping through a gap. it felt like the ship was flying; floating just above the ground with no shaking or disturbance to the feel of the ship. Gaffe Sethom told Jeth to turn the ship south. The Rose doesn't move like a normal ship, it pivoted like a top and slid to a halt before making progress towards the south. Jake lost his breakfast over the side. We plodded at a camel's pace into the dunes. Sahara Rose would rise up and down the dunes with ease. Feeling comfortable with the controls, Gaffe Sethom asks Jeth to increase speed. pushing the levers forward, Rose lurched like a scarf in a sand storm. it was amazing how fast the ship could go. it could easily beat a stallion on packed earth. Time unfortunatly flew by and we realized that the Rose only sails during the day. As the sun began setting, the Sahara Rose slowed her pace, sinking the hull into the sand. with the last of the light gone, She furled her sails and tucked herself into the top of a dune. Gaffe Sethom looked to the stars to find our location. At the pace the Rose can travel, it would seem that we could half the time from Talam-Qedish to Anhur. Beats a six day jostling camel ride. Gaffe, can we keep her?
— Bonekicker Bakmose

What a lovely article and a great read! You've managed to put in so much detail without information dumping!   Keep up the good work! :D