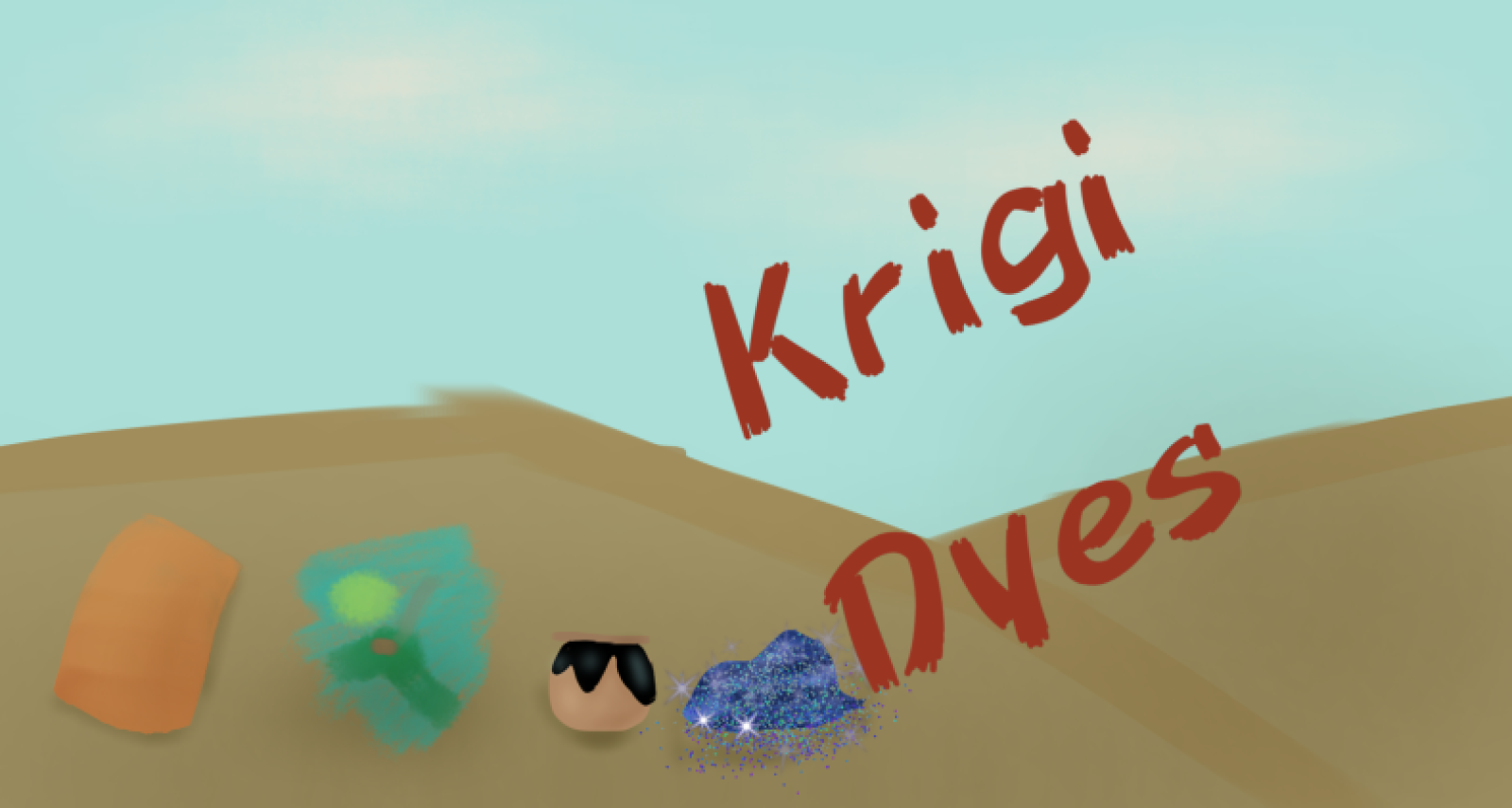 Krigi dyes are a major export of the Krigi dragon blessed. They are made from a variety of different minerals and plants found throughout the desert, with a variety of purposes.

Many Krigi like to accent their clothing with bright colours. The most easily made colours are red, blue, and yellow. Combining these can make a wide variety of colours and ombres. Red and yellow are especially popular, and blue is almost never used aside from making other colours.   Most clothing dyes come from plants, which makes them most accessible during rainy months when they plants bloom. Red is the rarest dye, so when it is used it is most often combined with yellow to either make orange or an ombre effect.

The paint used to adorn Krigi temples is made from plants, insects, and minerals. These paints come in all colours, as they are necessary to depict the numerous scenes painted within the temples. The paint is fairly resistant, though temple paintings are typically touched up to ensure brightness and completeness every few years.

Makeup is a somewhat controversial topic in Krigi society. The majority of mating age Krigi use it, but those who are open about it are seen as liars and cheats. The most common two types of makeup are scale paints and horn/claw polishes.   Scale paint is made of dark dyes of charcoal mixed with shiny minerals, and is used to brighten and shine scales, cover hunger cracks and other blemishes, and hide scars. Some Krigi with undesirable colouration attempt to use makeup to cover these scales, though it is rarely a sustainable solution.   Horn polishes are made with flakes of precious metals. The aim is to brighten or alter the colour or apparent material of horns and claws. Ivory horns are sometimes covered this way, especially in places where they are historically poorly received.

There are many plants and minerals in the desert that can be used for dyes. However, their colours are too dull or blue for the Krigi's liking. These are the dyes that are exported to other dragon blessed. The Krigi's continued survival is quickly becoming dependent on the exports of weapons, crafts, and dyes, as their desert can't support two young dragons and the dragon blessed for much longer.

Most dyes are powders that can be mixed with a small amount of water or other liquid to make a liquid. Scale and wall paints tend to be thicker, while horn polish and cloth dyes are thinner.

It's believed that dye usage in the desert has been a thing since the The Draconic Empire. However, more dragon blessed serving inventions such as make up are likely more recent.

Some dyes are actually poisonous. While some only have effects on those who used the dye in its raw form on the daily, or to those who injest the dye particle, some can poison those who simply interact with the dyed object long enough.    Scale paint and horn polish both come with hidden health risks. There are often traces of heavy metals and other dangerous things in horn polish. Meanwhile, toxins can be absorbed through the scales from scale paint. Scales can also be smothered and become unhealthy if they are covered in paint too often.

While the Krigi and others aren't aware of it, their dyes have numerous environmental impacts. While the small scale of their current mining operations causes negligible damage, the increasing need for trade and more metal will likely push for more damaging techniques. Their dyes also put poisons and heavy metals into the environment, and the water supply.   Dyes used to paint boats on the coast wash off into the water, and as this practice becomes more popular as people try to imitate wealth the situation will get worse.

The biggest market for Krigi dyes is Gix Aria, where it is seen as a luxury item. Wealthy residence use dyes and paints from the Krigi to dye everything from their cloth to houses, carts, and even Melo Boats.    This is a promising opportunities for many Krigi who are looking to move to Gix Aria, as they can set up shop as a dye merchant or maker.
Art is by me.
Related Locations
Related Species

Answering: "Α material only harvestable from nature"
Visit invadersforever's Competition Page Check all other answers to this prompt Competition Homepage