By and large, most objects cannot simply be 'made magical' by the application of power. Either an object has to be designed to hold power, or it must be carefully prepared by runescribes to take in power and apply it to a very specific purpose. The former cases are almost entirely found in nature, from creatures with magically-attuned organs or growths to crystals and gems that act as natural focuses for arcane energy. For the latter, runes are a complex linguistic form, involving writing linked 'instructions' to tell an object how it ought to utilize the power granted to it. Professional runescribes train for years to be as precise and concise as they can be without leaving loopholes for magic to interpret their instructions in unintended ways. Further detail on runes, the general concept of enchantment, and magic's proclivity for forging its own path from instruction A to output B can be found in the study of Magic as a whole.
Technically speaking, there is a third options for items and beings to become infused with magic, but this more or less boils down to 'divine intervention', which as you might expect is an exception rather than a rule. These sorts of god-given artifacts are rare, and in the majority of cases do not abide by the rules mortals do.

Runeborn were among the first Living Constructs created. At their most basic, they are a collection of inanimate and/or inorganic materials covered with runes that allow them to move in order to complete given instructions. The first runeborn were little more than living puppets, incapable of anything complex or much more difficult than moving around. However, as time went on and the craft improved, runeborn steadily became incredibly sophisticated. From wooden servants to granite construction behemoths, runeborn can be built to suit precisely the job they're being made for. So long as their runes establish what parts constitute a single being, they can even be made up of disparate pieces that move in tandem.
For the pedantic, all of the other constructs mentioned throughout this article are also considered Runeborn by technical definition, but they are frequently given more specific titles in order to clarify some aspects of their being.

Automatons are partially mechanized runeborn. Half or more of their functionality is provided by machinery and rudimentary robotics rather than by magical rules. This provides the Automaton with more surface area that can be devoted to instructions and hyper-specialized functions that cannot be performed by mortal tools. This makes most Automatons significantly more intelligent and capable for problem solving than runeborn of equivalent size, but they require much more knowledge, raw material, and expertise to craft. 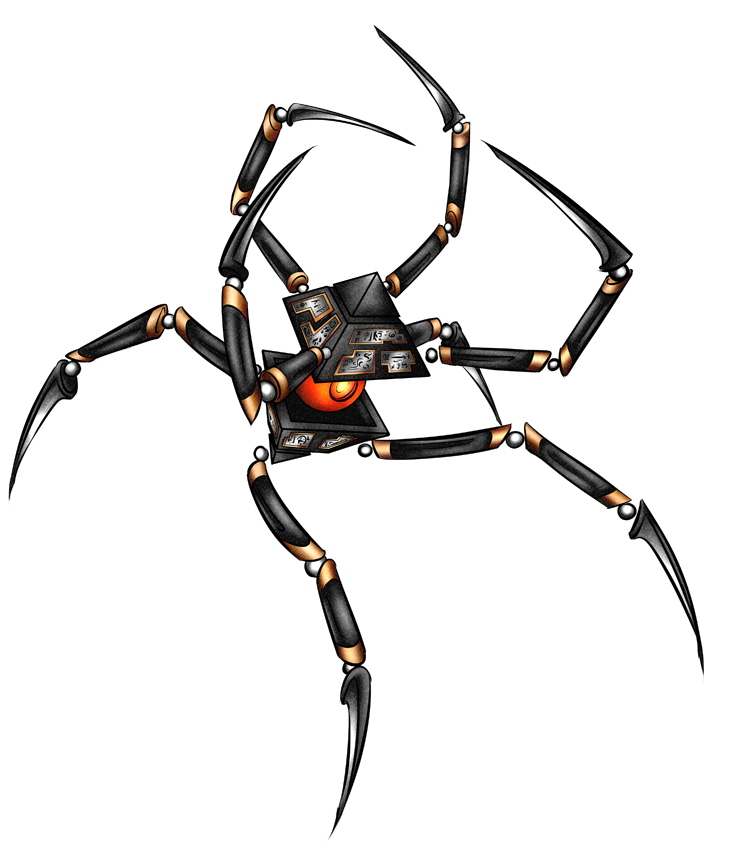 Clink, the Demon Golem by Satellite Nine
Clink is a runeborn composed of a number of runic pieces all tied to a singular core. These runes both enable his otherwise-inanimate body to function and serve as an anchor for his soul.

Necromancy is the art of granting the semblance of life to the corpses of the once-living. This can be performed solely through magic, typically by forcing a body's organs to continue functioning for a brief period despite the soul being absent, but it requires much more power and rarely lasts as long. Modern necromancy frequently involved carving runes into the flesh or bone of a corpse - to give it a significantly longer "life"-span and enable specific directions without fail - as opposed to counting on what remains of the corpse's brain to take in and properly carry out spoken instructions.
It is a fairly common practice in wealthier parts of Duwallen, where Necromancy can be practiced professionally, to sell one's body to the state after death. Should one take the government up on this offer, their family will be reimbursed for all funeral proceedings on top of an amount of money based upon the condition of the body, after which the town's Necromancer's will raise the corpse as part of an undying, untiring workforce. Many portions of Sturmstadt, the nation's capital, were built out over the waters of the Lebensee by squads metal-plated skeletons of its own deceased citizens.


A fairly recent trend among Duwallish police forces has been to hire on Necromancers who serve alongside coroners, but are able to be brought into the field to temporarily revive murder victims in order to probe what remains of their minds for information. For a variety of reasons, the confessions of the dead alone will only rarely hold up in a court of law, but even the threat of having the dead themselves point the finger at their killers has led to a shocking drop in the murder rate in cities throughout the nation.


Self Awareness in Constructs

When magic is concentrated into one place for long periods of time, such as with runes that are never allowed to fully run out - a common practice in all of the constructs listed above - ambient, environmental magic slowly begins to 'stick' to the heart of whatever is being repeatedly enchanted. Over time, this collected magic can coalesce into a rudimentary living soul. By most metrics, this is almost identical to how souls are formed in biological children; it merely takes significantly more time, sometimes upwards of tens of years. When this occurs, the enchanted construct in question becomes self-aware, exceeding the previous boundaries of its written instructions and becoming fully sapient. Of course, sapience does not mean intelligence, so it takes many newborn souls time to acclimate to their sudden existence and learn about the world around them. For many, this manifests as suddenly being quite terrible at the jobs they once performed without issue as they struggle between their written selves and their new, unshackled soul.
Interestingly, this same principle applies to all magic and runes that are maintained long-term, meaning there can be enchanted objects that were never meant to be personified in any way that may still gain awareness over time, whether their owners and creators realize it or not. In these cases, the size and complexity of the object is the main determining factor in how long it will take for a soul to be formed. Enchanted vessels or structures have been known to come to 'life' in a few dozen cases across the globe, while instances of sapient lighters, swords, or children's toys are a great deal less common.

Remove these ads. Join the Worldbuilders Guild
The Metaphysics