I don often fall to the Down Deep, but is worth when you can bring back a boughful of good Dark Root.
— Resident of the Great Tree, Floor 5

Found within the sprawling caves of Floor 5 , known as The Down Deep . Dark Root grows in the cracks of the walls, and seems to darken its surroundings, as if it was sucking in all nearby light.

Dark Root was not always what it is now. Long before Floor 5 cut its self off from it's neighbouring floors, Dark Root in it's current form didn't exist. The caves had yet to be opened, and the The Great Tree's roots spread through the ground, undisturbed.   The roots however became tainted. Something disturbed the ground, and the floor shook; sections of mountainside fell away, revealing the cave network. Within, portions of the Great Tree's roots could be found, networking through the walls of the caves. They had taken on a different form, and no longer resembled any portion of the Great Tree.

When Dark Root is found, still connected to main tendrils of root, it is long, slender, and smooth. Living Dark Root has an aura of darkness about it; a beneficial quality, as it makes seeking the root easier. Simply go to where the light of your torch does not touch.   The root likes to wind it's way through the cracks and hollows of the cave walls. It's smooth flesh has a slight stretchy quality to it, and anchors it firmly within the cracks. Resourceful gatherers will bring crude tools to pry sections of root from the wall, and have a companion cut parts off of it. The root is not very heavy, and gatherers often bring back entire basket loads.

When Dark Root is cut away from the main trunk, it undergoes a rapid change. The previously sleek and smooth root begins to shrivel up until it is stout, and round. Smaller tendrils grow from the cut piece, extending an inch or two from the now withered root flesh. These tendrils sway slightly, back and forth, as if a gentle wind was lightly playing with them. The root may be dried out, and then either cooked, or ground into a paste. Even in it's dried form, the small tendrils will always sway back and forth. 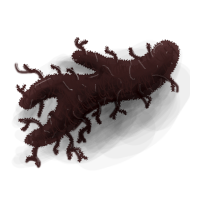 When the root is ground up, and mixed with a small portion of water, it forms a thick paste. As dried root still retains a small amount of light-dampening power, the resulting paste can be used to darken certain areas. Most often it is used as a paint within the Tree Houses of Floor 5, to darken sleeping areas.

Dark Root can be eaten, when cooked in a specific way. It requires high heat, and a long cooking time, blackening the already dark flesh of the root above the fire for at least an hour. When cooked this way, after enough heat and time, the skin of the root will crack and crumble. The inside of the root will have started glowing, very faintly. The root may be eaten this way, while it's still hot. The taste is most often compared to an earthy, slightly sour potato.   It is said those who consume Darkburn gain the temporary ability to see in the dark. Additionally, their shadow lengthens, and appears to wrap around them, shrouding them in a slight darkness. These effects last for about half an hour. Darkburn, when left to cool, no longer grants these boons. When Darkburn cools, it melts into a coagulated pile of rotten material.
Summer Camp 2019

All images created by Stormbril.