Gears, Levers, pulleys, working together in an incomprehensible machine.

[...] and that's when he told me, "Extra rations for a year, and an instant promotion to anyone who can figure out how to drive their first try."
— Soldier of the Seventh Floor

For souls sake, why are there so many controls!? Why do I need to flip three switches, spin two dials, press both feet down on two pedals, and push a button to simply drive forward?
— Soldier of the Seventh Floor

Metal in incomprehensible shapes and configurations, countless gears locked together in an intricate dance of engineering. While it shares the name Clockwork, a Clockwork Tank is actually completely separate from the rest of the Clockwork of the tower, as it is not autonomous. Two pilots sits within a Clockwork Tank, replacing the artificial intelligence found inside regular clockwork constructs.

A cockpit fit for two people. Within are 13 levers, 8 pedals, 52 switches, and 8 dials to control this complex piece of machinery; driving the 8 large spoked wheels, 4 on either side of the tank. One large ballista sits atop the clockwork tank, directly in the middle. To either side of that are smaller, open air cockpits, each with a miniature ballista.

The Engineers of the Seventh Floor Castle Town, through studying the regular Clockwork of the tower, have created a system of potential energy to drive a clockwork tank. The energy is stored via a multitude of wound springs, bent metal, and resistant bands. A single winding mechanism, located in the back of the tank, is used to store the energy required to move.   A single winding takes about 15 minutes to do; one winding will power the tank for about an hour. A seat is located at the back of the tank for another passenger, intended for quick access to the winding mechanism. It's not uncommon to put the strongest copilot in the winders seat, as to have the shortest winding time possible.

One massive ballista at the top of the tank is controlled by the two pilots within the cockpit. It's one pilot's job to maneuver the tank, while the second can aim the weapon on top. A rack of bolts is located within reaching distance of the second cockpit seat; each 5' piece of sharpened wood needs to be manually lifted and loaded into the main ballista of the tank.   To either side of the main cockpit are two smaller seats, with similarly smaller ballista mounted at the front of them. These secondary ballista have racks that can carry about 50 extra bolts, each one about 2' long -- they too need to be manually reloaded for each shot, and as such are in easy reaching distance. 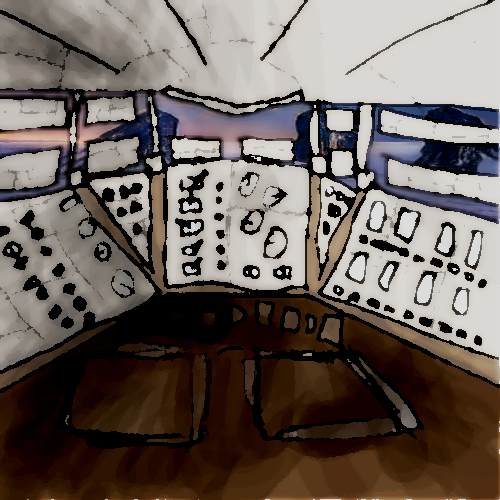 
Pilots
One main pilot, one co-pilot, one "Winder" in the rear.
Gunners
Two Gunners, one to either side.
Main Ballista Ammunition Capacity
25 bolts, each at 5' long
Secondary Ballista Ammunition Capacity
50 bolts per side, 2' long
Winding Time
~15 minutes, depending on strength of the "Winder"
Operation Time From One Winding
~1 hour, depending on use

Around the time the Clockwork Tank was first developed, Castle Town of the Seventh Floor was still mid campaign, attempting to storm the final staircase located on the Seventh Floor. The staircase would lead to the Starstone Architrave, which was believed to be the location of total salvation.   The various defences around the staircase -- monsters, constructs, traps, poisons and curses -- were too much to overcome, and Castle Town gave up. An uneasy armistice was reached, and the floor has existed in a state of near-peace since then.   Seeing as the floor is no longer at war, the clockwork tank has but a few uses.

The soldiers of the Seventh Floor keep themselves in a state of readiness, despite the armistice. The army they're a part of wages mock battles against its self periodically, ensuring it's always ready should the time come for another true war. During these mock battles, all of the clockwork tank's bolts are replaced with blunt wood, wrapped with soft cloth. Being hit by one of these bolts is still quite dangerous, and extremely painful -- however, the lethality of the bolts is almost entirely negated.

The Ice plains surrounding Castle Town are home to massive beasts that are nigh impossible to take down by only one person. The beasts have hide that is too thick, and natural attacks that are too strong. To continue to feed both the city of Castle Town, and the army that protects her, meat must continuously produced.   Weekly scouting missions are a part of the army's duties, during which they take note of where the heard of beasts are at. When the next batch of meat is needed, a pair of clockwork tank teams will be sent out on a hunting trip. Using the data from scouting, they'll locate the beasts; one tank will be used to scare or draw out a beast into a vulnerable position, while the second will pounce, and fire upon the beast using its secondary ballistae.

Header Image made with patterns via Patterncooler.com   All other images by Stormbril.