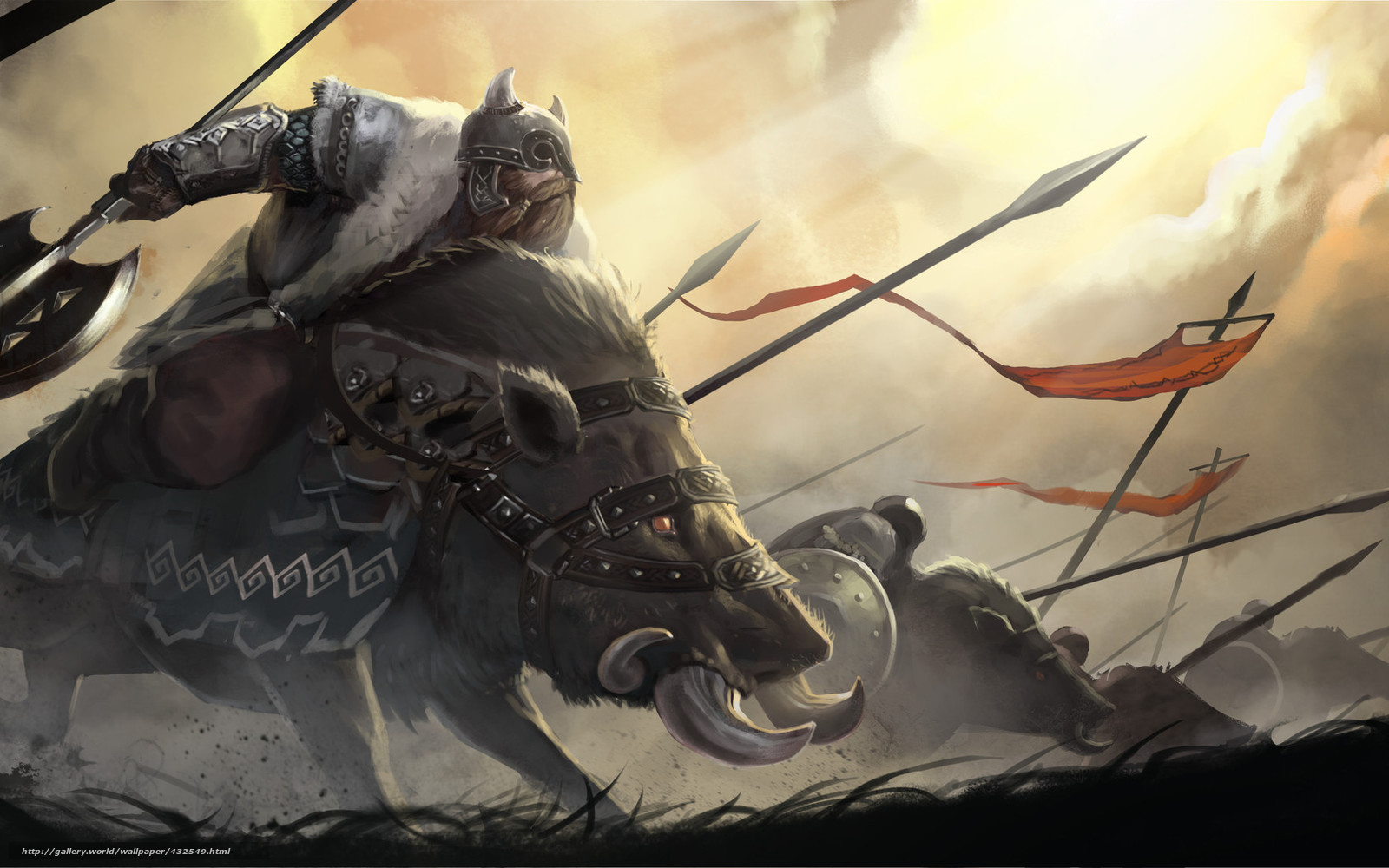 Adapted From Dwarves-d20PFSRD https://www.d20pfsrd.com/races/core-races/dwarf//
Dwarves are a stoic but stern race, ensconced in cities carved from the hearts of mountains and fiercely determined to repel the depredations of savage races like Orc and goblins. More than any other race, dwarves have acquired a reputation as dour and humorless artisans of the earth. It could be said that their history shapes the dark disposition of many dwarves, for they reside in high mountains and dangerous realms below the earth, constantly at war with Giant, Goblins, and other such horrors.

Dwarves are short and stocky, standing about a foot shorter than most humans. They have wide, compact bodies and burly frames. Dwarves of all genders pride themselves on the length of their hair, which they often braid into intricate patterns, some of which represent specific clans. A long beard is a sign of masculinity and honor among the dwarves, and thus a clean-shaven male dwarf is considered weak, untrustworthy, or worse.

Dwarves typically reach physical adulthood around the age of 25, though their traditionalist culture places more value on completing coming of age ceremonies unique to each clan than reaching a certain age. A typical dwarf can live to around 350 years old.

Dwarven adventurers tend to work as treasure hunters or sellswords. They often leave their citadels and subterranean cities in search of wealth to enrich their homeland or to reclaim long-lost dwarven treasures or lands taken by the enemies of their kin.   Typical dwarven backgrounds include Acolyte, Artisan, Merchant , Miner, and Warrior. Dwarves excel at many of the martial classes, such as Barbarian, Fighter, Monk, and Ranger, but they also make excellent Clerics and Druids.

The great distances between dwarves’ mountain citadels account for many of the cultural differences that exist within their society. Despite these schisms, dwarves throughout the world are characterized by their love of stonework, their passion for stone- and metal-based craftsmanship and architecture, and their fierce hatred of giants, Orc, and goblinoids. In some remote enclaves, such as those areas where these races are uncommon or unheard of, dwarves’ fixation on security and safety combined with their rather pugnacious nature leads them to find enemies or at least rivals wherever they settle. While they are not precisely militaristic, they learned long ago that those without axes can be hewn apart by them, and thus dwarves everywhere are schooled to be ready to enforce their rights and claims by force of arms. When their patience with diplomacy is exhausted, dwarves do not hesitate to adopt what they call “aggressive negotiations.”

Dwarves rarely forgive a wrongdoing done to them or their families. Despite this, they are capable of seeing through ancient prejudices to value a battle-tested friend. True friendship to a dwarf is worth more than all the gold and gems they seem to crave.

Dwarves have a wide range of eye color, with brown and grey being the most common, though some possess shocking blue irises. Their hair is usually worn long, and dwarven men spend considerable effort growing, maintaining, and embellishing their long beards. Popular beard decorations among more traditional dwarves include complicated braids, small trophies of battle, or other objects associated with significant life events. One of the worst offenses to a dwarven man is to shave his beard, as it is considered a deadly insult not only to the individual but also to his ancestors and family.

Darkvision - Dwarves are able to see in darkness.

Dwarves are a short and stocky race, and stand about a foot shorter than most humans, with wide, compact bodies that account for their burly appearance. Male and female dwarves pride themselves on the long length of their hair, and men often decorate their beards with a variety of clasps and intricate braids. Clean-shavenness on a male dwarf is a sure sign of madness, or worse—no one familiar with their race trusts a beardless dwarven man.

There is dramatic sexual dimorphism in dwarven physiology. Males tend to be quite noticeably broader, though not as much taller comparatively, and they have slab-like torsos and heavy eyebrows. Most males grow facial hair at an alarming rate, and as such almost all dwarves keep a beard, with the exception of the Gorod  caste of Havril .

At birth, dwarves are gifted with a Clan Dagger. Selling such a gift at any point in a dwarf's life is considered a taboo among their kin.   The Dwarven Maulaxe is a weapon that features both a sledgehammer head and a sharp blade. Dwarves also have their own adapted variants of the Dwarven Waraxe and spear-hafted Dwarven Urgrosh. Stoneplate is armor crafted from alchemically strengthened pieces of shale and basalt rock.

Most dwarves primarily speak the Dwarven language, although most are also fluent in Taldane. Dwarven shares its runic alphabet with Terran. Dwarven names are full of harsh-sounding consonants and rarely include soft or sibilant sounds. Honorifics are common in given names, such as "-sun" ("-son"), "-dam" ("-daughter"), and "-hild" ("-wife"). Family names sometimes contain words in Common, such as "gold" or "hammer". Also, the letters Q and X do not appear in Dwarven.

Dwarves are driven by honor and tradition. While they are often stereotyped as standoffish, they have a strong sense of friendship and justice, and those who win their trust understand that while they work hard, they play even harder—especially when good ale is involved. Most dwarves are lawful good.

Dwarven dress mirrors the items they so carefully craft, elevating function over style, but they are never plain. Most decorations also serve a practical purpose, such as special fasteners, reinforced seams, useful padding, or loops for holding weapons or tools.

Dwarves are lovers of history and tradition, and their long lifespan leads to far less in the way of generational shifts in attitudes, styles, fashions, and trends than shorter-lived races exhibit. If a thing is not broken, they do not fix it or change it; and if it is broken, they fix it rather than replace it. Thrifty as a rule, dwarves are loath to discard anything unless it is truly ruined and unable to be fixed. At the same time, dwarves’ meticulous, near-obsessive attention to detail and durability in their craftsmanship makes that a rare occurrence, as the things they make are built to last. As a result, buildings, artwork, tools, housewares, garments, weapons, and virtually everything else made by dwarves still see regular use at an age when such items would be relegated to museum pieces, dusty antique shelves, or junkyard fodder by other races. Taken together, these traits create the impression that dwarves are a race frozen in time.   Nothing could be further from the truth, however, as dwarves are both thoughtful and imaginative, willing to experiment, if always keen to refine and perfect a new technique or product before moving on to the next one. Dwarves have achieved feats of metallurgy, stonework, and engineering that have consistently outpaced the technological advances of other races, though some non-dwarven races have used magic to supplement and perfect their own creations to achieve the same ends through mystical rather than mundane means. They are also a race typified by stubborn courage and dedication to seeing tasks through to completion, whatever the risks. These traits have led dwarves to explore and settle in extreme environments that would cause other races to quail and retreat. From the darkest depths of the underworld to the highest mountain peaks, from rusting iron citadels along desolate rocky coasts to squat jungle ziggurats, dwarves have established their enclaves and redoubts, holding them against all comers or perishing to the last and leaving only their enduring monuments to stand as their legacy. While it is said that dwarves are not venturesome or inventive, it would be more accurate to say that they maintain a focus on and dedication to each task they undertake and every change they adopt, vetting such changes thoroughly before adopting them wholeheartedly. When faced with new circumstances and new needs, they react by applying tried and true tools and techniques systematically, using existing methods whenever possible rather than trying to invent novel solutions for every situation. If necessity requires, however, they throw themselves with equal vigor into developing the next perfect procedure for demolishing the obstacles that get in their way. Once their desired goal is obtained, they focus on consolidating each new piece of territory or conceptual advance. Dwarves thus rarely overextend themselves, but they also may miss opportunities to seize the initiative and maximize the advantages they create.

Gladdringgar is the dwarven tradition of carving one's personal rune in stone on the deepest cave or tunnel one has explored. It literally translates as the "ritual of toil", although younger dwarves have begun to refer to it as kangreddin, or "wall-making". Dwarves are obsessed with leaving a mark and being remembered, and great respect is given to the dwarves who risk their lives to delve in their race's ancestral home in the Darklands.

According to their own myths, the dwarves were forged by Gotar in ancient times and are to this day sometimes referred to as "Gotar's Children". They lived and worked in their forges and cities in Dur-Zoth , fighting against the Orcs and goblinoid races, and among themselves, for eons.

Dwarves and orcs have long dwelt in proximity to one another, and share a history of violence as old as both races. Dwarves generally distrust and shun half-orcs. They find elves, gnomes, and halflings to be too frail, flighty, or “pretty” to be worthy of proper respect. It is with humans that dwarves share the strongest link, for humans’ industrious nature and hearty appetites come closest to matching those of the dwarven ideal. 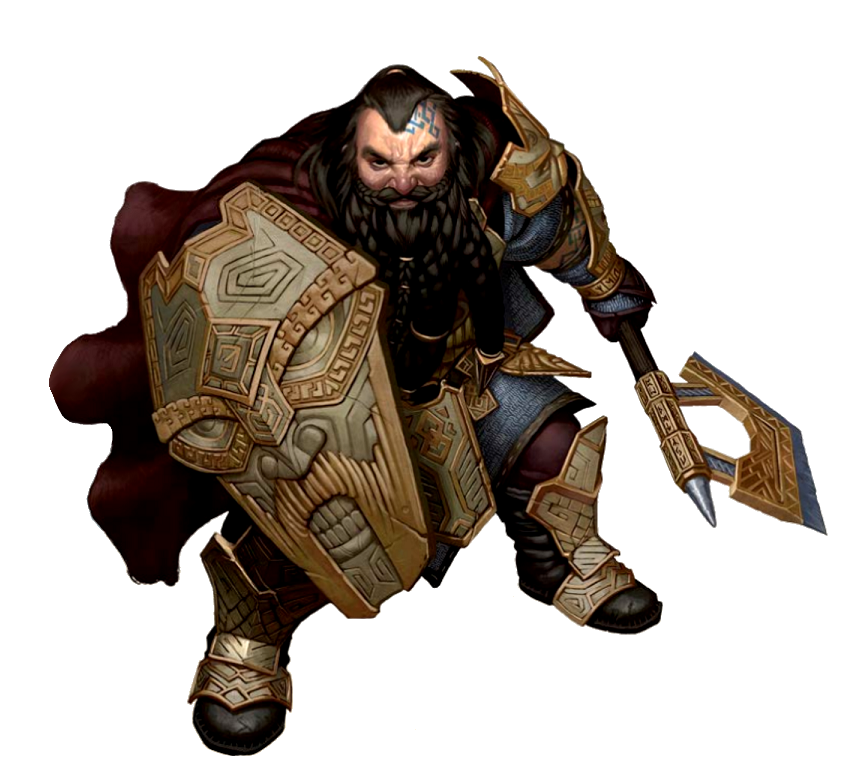 Genetic Descendants
Scientific Name
Homo pumilio pumilus
Lifespan
500 years
Average Height
(3 ft. 9 in. – 4 ft. 5 in.)
Average Weight
(134 – 206 lbs.)
Average Physique
A dwarf is a stout humanoid, usually a head shorter than their Human counterparts, but much broader. They have thick, heavy bones, tightly packed muscular sinew, and stability unmatched by other races. This bulk also causes dwarves to weigh as much, if not more than, humans. Their coloration varies, with the dwarves of Geiddnir being deeply tanned and weather-beaten, while the dwarves of Mifob and Saskhij tend to be paler.
Geographic Distribution
Related Organizations
Related Ethnicities
Related Technologies
Related Materials

Join Sundered Cosmos Discord!
This setting uses trademarks and/or copyrights owned by Paizo Inc., which are used under Paizo's Community Use Policy. We are expressly prohibited from charging you to use or access this content. This setting is not published, endorsed, or specifically approved by Paizo Inc. For more information about Paizo's Community Use Policy, please visit paizo.com/communityuse. For more information about Paizo Inc. and Paizo products, please visit paizo.com.
Additional artwork is owned by their respective owners.