Third among Ironrise's expansions. Nightfall is not a place that outsides look to visit often, if at all. It is known for insular, paranoid and superstitious people. Technology is shunned, Constructs are banned and the leaders of Nightfall are cherished as noble heroes. And, that is just the citizens. No mention of Nightfall would be complete without acknowledging the Veil of Darkness.

When the first settlers came upon the region they were faced with a maddening anomaly. A bleak misty shadow spread out for hundreds of miles before them in a great dome. Within, no speck of sunlight would penetrate. The skies within this field were shrouded in permanent night and the stars above were not those of Spirel. The black skies of Nightfall belonged to somewhere else entirely as if the whole region was plucked from a different world and dropped carelessly in the forests of Spirel.

The ominous nature of the region was not enough to prevent Ironrise from demanding it be settled. The lumber and ore in the region were justification enough but most believe that it was founded by Pinnacle's desire to keep an eye on the region and watch might slip between the Veil of Darkness and into know reality.

Nightfall's citizens look toward The Shaws as their protectors and their saviors. To outsiders, the Shaws are elusive, strange, hauntingly beautiful and utterly terrifying. To the citizens of Nightfall they are one thing that keeps the monsters of the Veil at bay and the insidious influence of Ironrise to a minimum. Victor Shaw is the Regent of Nightfall and his authority goes unquestioned in the city. His sister Millicent is a celebrity in the city and the envy of many as is the rest of the Shaw family. The average citizen pays little attention to the rumors that make their way through the taverns and shipyards. The Shaws prey upon the flesh and blood of humanity, they are ancient beyond belief and rulers of a long-dead civilization, that they seek to enslave humanity and topple the rule of Pinnacle. These are all flights of fancy or ignorant speculation that no loyal citizen would ever believe.

The wilderness outside the walls of the city are a place few would walk willingly. The Veil of Darkness is as much a barrier as it is a gateway. Monstrous entities are known to slip between that world and this one to feast upon lonely travelers. Even airships are not safe. Every year there are reports of ships that vanish the moment they cross the Veil, never to return. Worse still are the stories of ghost ships. Airships that did return from the Veil decades after their disappearance. Changed into something ghoulish and horrific. These ships are said to prowl the skies now looking to drag wayward travels back to the other side with them.

The citizens of Nightfall have grown to fear the outside world as much as they fear the horrors outside the city walls. They are loathed to welcome new settlers in.

The Shaw Regency rules everything below the Veil with complete authority. They pay their tithes and meet their export quotas to Ironrise but otherwise, they have no agenda outside their city. Or so they say. Many suspect the mysterious Regency aims to one day topple Pinnacle and take its place.

Nightfall is protected by a large wall and many of the Regency's brutish soldiers.

Nightfall prides itself on self-sufficiency and rarely takes in Imports. 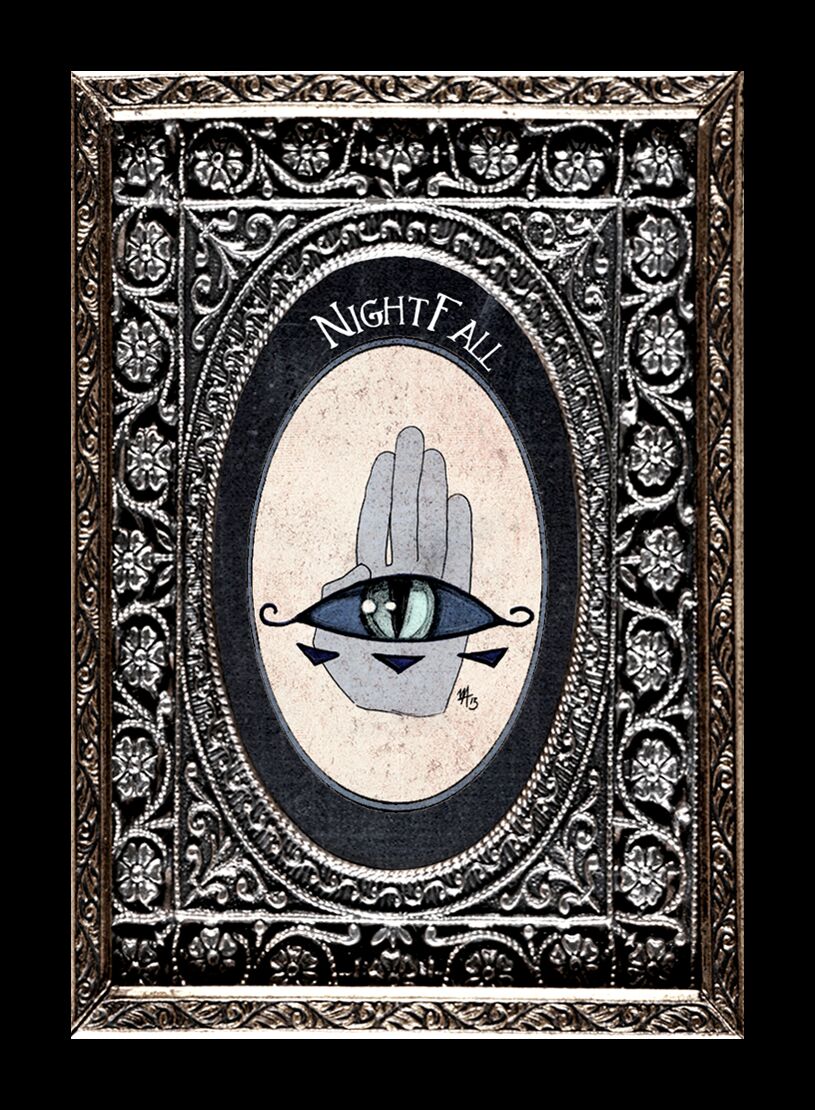 Symbol of Nightfall by Yusef Abonamah