If you're not getting the answers you want out of him than you're not being creative enough. Take him to the roof, throw him off. Scrap him up and then do it again. Then, ask. Never mind ... I'll do it myself! Damn amateurs.
— Bennett Creedy


The enemies of the Prime Minister have a way of vanishing when no one is looking. All across Spirel are mass graved filled with those that couldn't escape Blackwell's Hound.

Publicly, Bennett Creedy is the Commander of the Ram's Wrath. He oversees the policing activities of the Ironrise's constabulary and defense forces. What isn't see by the public is the sheer amount of blood that's on his hands. And, how gleefully he takes every opportunity to spill more. Espionage, surveillance, torture, interrogation and murder are part of Creedy's arsenal and he deploys them as often as he can.

All of his cruel acts are carried out in service to the Prime Minister. In truth, Creedy is addicted to his power and the pain he can cause with impunity. The only thing that matters to him now is maintaining his favor with Beckett Blackwell and indulging himself fully in every violent delight this world has to offer.


Without question, Creedy's greatest benefactor is the Prime Minister of Ironrise and the master to whom all other governments kneel. Nothing is sacred to him except suffering and his alliance with Blackwell affords him unlimited access to potential victims.


Creedy is not someone who is picky when it comes to whom he works along side. If the Prime Minister commands him to combine efforts with Noble's thugs, agents of Kraken or the monstrous Shaws of Nightfall than he'll happily comply. If there's any he looks forward to working alongside it's Millicent Shaw and Doctor Polly Plank. Both of them have mastered unique and extraordinary means of inflicting pain and he relishes any opportunity to expand his horizons.

William Buckthorp is without a doubt the greatest enemy he's every faced. For Buckthorp, Creedy is the man that destroyed everything he loved, everyone loved. To Creedy, burning down Buckthorp's world was just a Tuesday. It was an impulse triggered by Buckthorp defying his orders and leaving his elite squad, the Black Nine, but an impulse none the less.

Bennett Creedy is a Mission Specialist character with a focus on Control. His stat line makes him well suited for just about any challenge but his real strength is his special ability, Police State. This ability punishes the Heroes movements within the cities he is station in and can combo with several other cards that force opponents away from their goals and closer to you. Also, this ability gives Creedy the option to take over any Cycle effect initiated by a Hero. This prevents the Heroes from being able to optimize decks via Cycling so long as Creedy has Martial Chips to spend.

Creedy's greatest weakness is Heroes that escape his grasp. Heroes that can stay outside of the same city as Creedy neutralize half his advantages. Also, depleting his Martial reserves cripples his ability to take over Cycling. He will need to be constantly on the move and refilling his Martial chips to be at peak effectiveness. 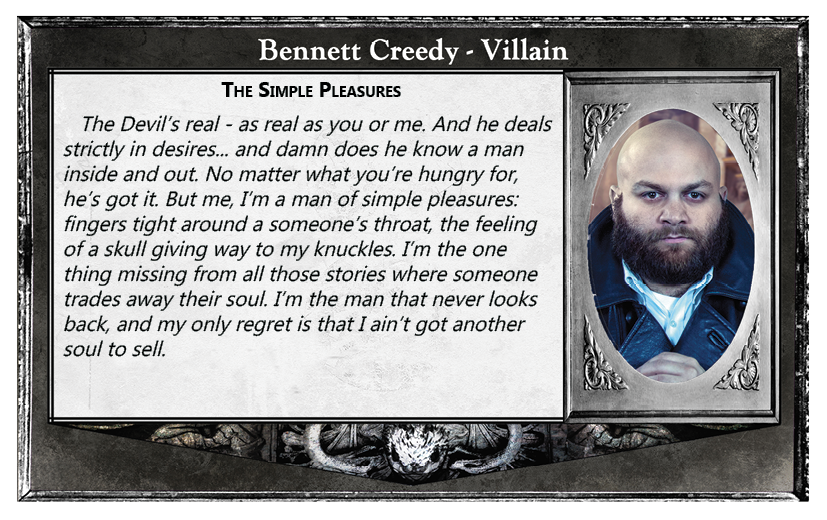 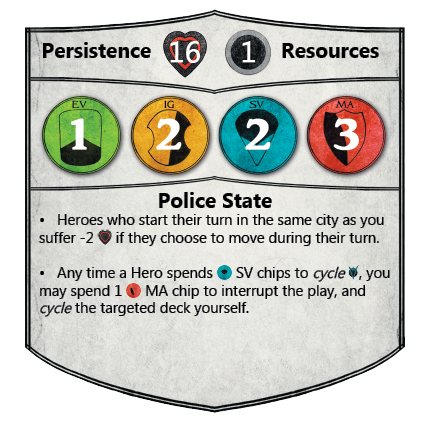 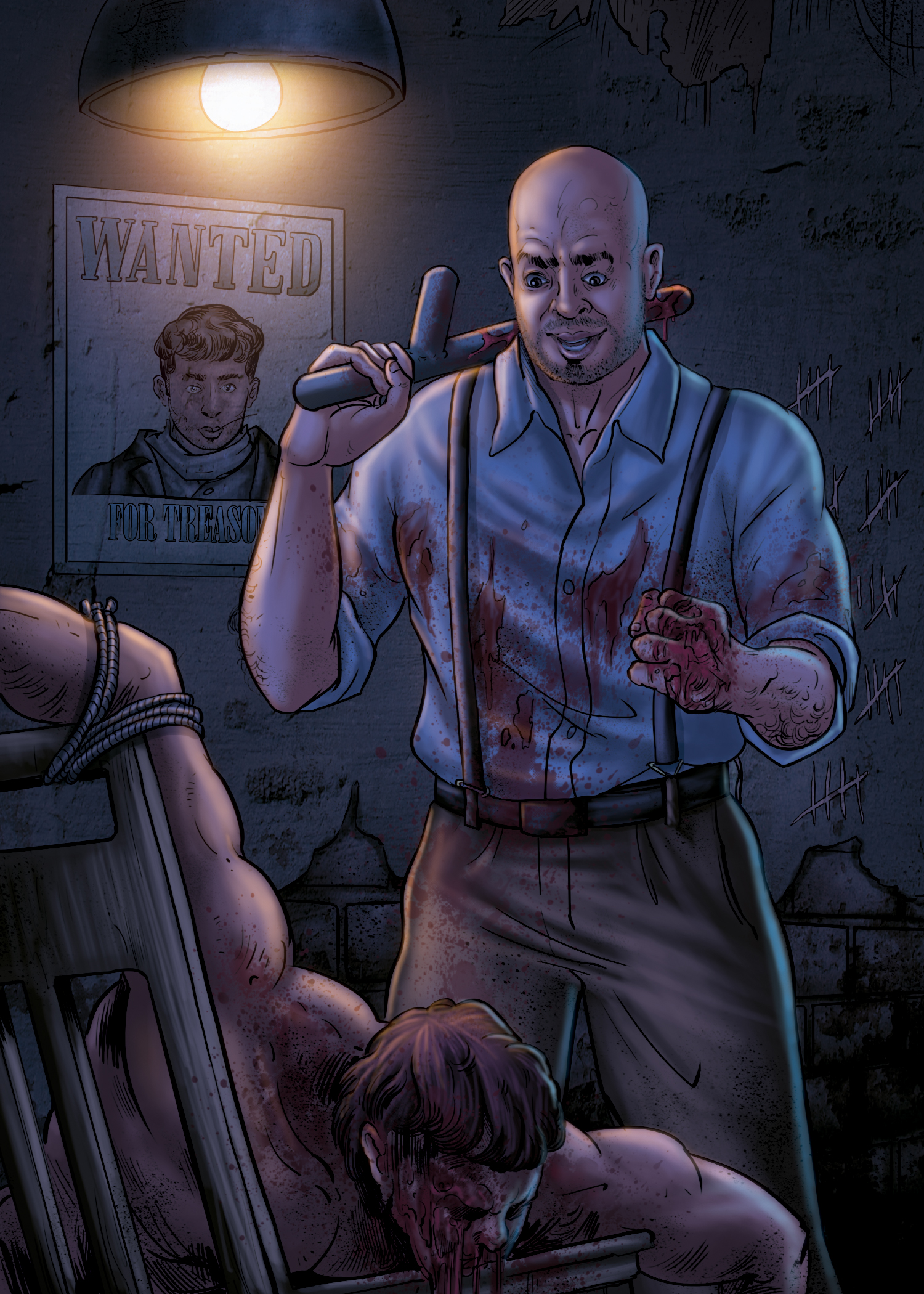 The Simple Pleasures by Crimzon Studios 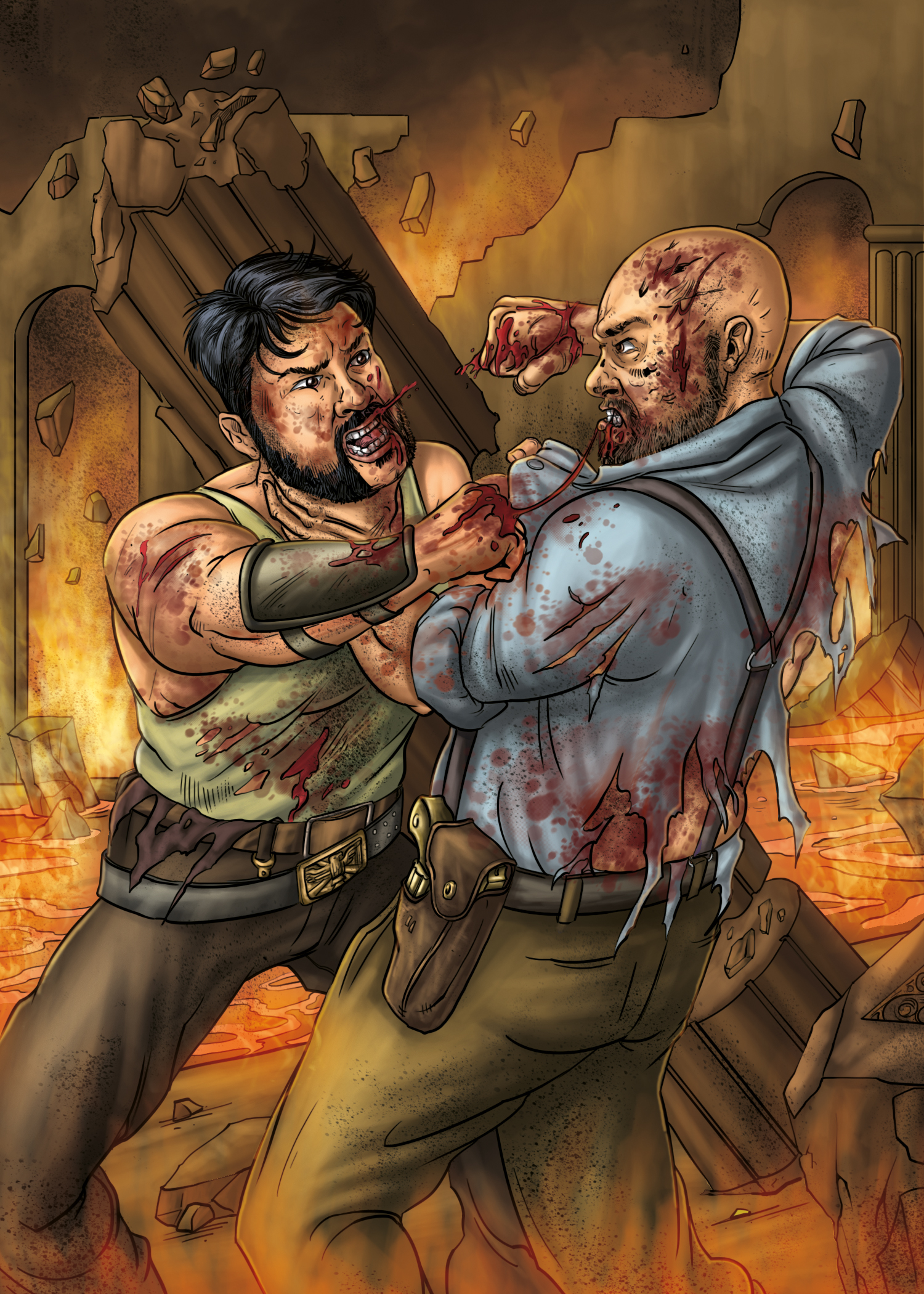 To The Bitter End by Crimzon Studios
Villains