The Zhurite are a hivemind of lithoids that developed on the planet Zhuur. A hivemind species, their only concept of individuality comes from encounters with the ancient Akhaale. In a similar extent, the Zhurite may have been content to be a primitive life form had it not come into contact with more advanced forms of life. Rather, it is instead possesses a great curiosity for its world and the beyond, not content to limit itself to just its home system.   A silicon based life form, the Zhurite consume raw minerals in order to survive. Its various forms appear to be made out of extremely dense cubes, lined with softer circuit-like patterns that are somewhat comparable to both a bloodstream and a nervous system.   The Zhurite are not slaved to a central mind, rather, their intelligence comes from linking the the weak Holzmaan Effect resonances of individual Zhurite drones and nodes. Thus, the Zhurite is not truly a single mind, as it can become decoupled should significant distance be put between individual entities.

The exact origins of the Zhurite are lost to history, from what it has learned from acquired records, the Akhaale theorized the Zhurite actually originated from a moon of Zhuur, that an older civilization destroyed, scattering its remnants across the planet.   Regardless of origins, the Zhurite’s oldest memories is that of a sort of slave or play thing of the Akhaale colonists. Though originally coming for the planet’s resources, the semi-sapient Zhurite was a curiosity of the natives. Still, despite the abuse doled out by its Akhaale masters, the Zhurite learned and expanded its cognitive capabilities in ways it would not have done otherwise.   One day, the conflict between the Akhaale reached Zhuur. The planet was thoroughly bombarded from orbit, and biological weapons were unleashed to kill anything that had somehow survived. The Zhurite burrowed deep into the planet to avoid the purging fire, their lithoid forms being immune to the carbon-aimed biological weaponry.   Still, the Zhurite was pushed to the brink of extinction, taking thousands of years to venture once more to the surface. There, it slowly rebuilt its network, encountering other splinter networks that fought for a time, before synchronizing their frequencies and becoming one.   Overtime, the unified Zhurite spread across the ravaged surface of Zhuur, before turning its interest to the beyond, the place it's cruel Akhaale masters had come from, but in thousands of years, had never returned.   Reaching out into the void, it discovered the wreckage of the planet’s defense forces. Though most of it was ancient slag, the Zhurite would uncover an intact Hyperspace Core amidst the twisted shell of a Starliner. 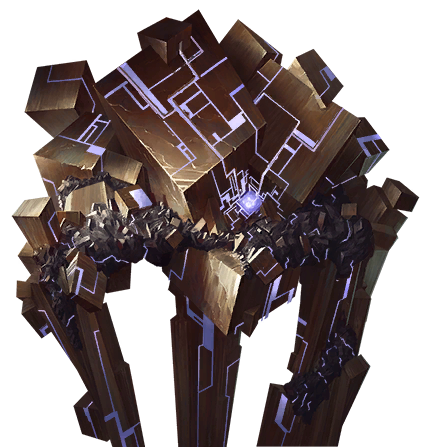