Mersekat is basically domesticated meerkat. It is unknown how long mersekat has been used by people, but within the tribes roaming inner section of Land of the People it is thought to be an ancient species evolved in symbiosis with people through history.   Traditionally owned mersekats are marked with rope collars or the special animals with feathers tied with ribbon to the tail.

Mersekat is multipurpose animal. It hunts venomous snakes, scorpions and insect, and thus protects people. They can also be taught to bring their pray back to their owner. Mersekat is also very attentive animal and, because of its alarming behavior it can be used as effective watch animal. Some people also breed mersekat for food and fur, but this is highly controversial practice, causing serious clashes between different tribes as some of the tribes revere the mersekat as sacred animal.

Mersekat reminds meerkat in most of the aspects. However mersekat's tail is longer than meerkat's as it is almost as long as its body. Also mersekat's head is rounder and snout bit wider. There is also more variation in size of mersekat and they are divided to three size categories: miniature, average and large. Their facial muscles have also evolved to enable more human like facial expressions.

The mersekat can reproduce around year, but there is usually only one breeding pair in one group. After about 65 days long gestation they usually give birth to two to ten pups.
Color and coat genetics

All white spotting variants are relatively common in mersekats.

Other effects of white spotting: White spot reaching around the eye usually causes the eye color to turn blue. If the white spotting reaches the inner ear causes this deafness.

Disease and disorder genetics:
These mutations are mostly found frequently in certain lines of mersekats.

"Breeding mersekats is blody hard! It is least to say depressing to spend high price for quality mersekat only to witness your group ripping it to million pieces. Even if they do accept the new animal part of the group, there is basically no change of it ever getting in the breeding position in the group. Oh and why would you want to add new non-relative breeding animals to your group? Well perhaps, because elsewhere after a few generations your pups are so sickly that only use they have is as a fertilizer. So, the easiest way to breed mersekat is to start over with pair of unrelated animals after every few decades, but who wants to kill off perfectly functioning group of animals."
-Rant of a mersekat owner

The natural habitat of mersekat is harsh dry areas. Naturally it would dig vast tunnels where it nest, but that is not possible when they wanders with people. Special wicker or grass baskets are usually made and filled with hay etc. to be used as mersekats' nest. This how ever does not fulfill their intensive natural need to dig and often they dig the ground on the area where they have stayed. This usually increases the soil quality as new nutrients surfaces and the hard surface breaks. However large group of owned mersekats staying in one area can cause serious damage to plants of the areas by digging.

The mersekat is predator and it has evolved to prefer hunting snakes and scorpions in groups. They hunt snakes in larger packs. Some animals distract snake while others attack it from behind. When hunting scorpions they first bite of the stinger and then rub the scorpion to ground before eating. They also consume insects that they actively search from ground and foliage. Mersekats are somewhat immune to many of the scorpion, snake and insect poison and venom. Because of the long co-evolution with people it also tolerates better plant based food than it wild relatives, but does not naturally resort to plant based food.

Most often mersekats live in tight social groups of 2-30 animals, where there is only one the mating pair that is the leader of the group. Whole group of mersekats participates rising the pups. Unlike it's the parent species not all of the animals of the group are related to the breeding pair, but introducing new members to the group is difficult as group is often aggressive towards unknown animals. The social hierarchy of the group is tight and maintaining social bonds is essential part of keeping group united and fights to minimum. Grooming others, sleeping together and surrendering resources to higher ranking animals are the most important ways of socializing.
The lines of mersekats used also for meat and fur production have evolved to have more lose social dynamics in group and in the group there can be more animals than just one pair that reproduces. In most extreme cases all of the mature animals in group reproduce. More breeding animals in group however increases the frequency of fights in the group and often the number of males is lot lower than in group with only one breeding pair. Also the effectiveness of hunting and alarming behavior of mersekat group reduces as groups efforts are more heavily in raising offspring.

The mersekat is used mostly as protection animal as it alarms people of possible threats and exterminates venomous snakes, scorpions and insects. When seeing the threats mersekats release high pitched alarming sound. People living long with mersekats often start to recognize the subtle differences of the alarm sound and can often tell what the mersekats are alarming for. Mersekats do not naturally bring their pray back to their people, but they are easy to teach to do that, as they are naturally intelligent, attentive towards people and their natural social behavior includes surrendering resources to others. This habit is usually only needed to teach new groups of mersekats as after it is established behavior in group, the new members will learn it via social learning in the group. So, mersekats are excellent tool when harvesting poison form venomous critters.

Mersekat meat has distinctive and intensive flavor that is often found appalling by people unused to eat it, but it has quite nice texture and is excellent nutrition in harsh environment. Because of the mersekat's immunity towards many poisons, some people think that mersekat's meat and especially it's livers gives similar properties to its consumer. However one should not consume old mersekat's liver as the toxins tend to accumulate there as the animal ages. Some people are even known to die on poisoning they got from eating liver of old mersekat. The fur of mersekat cannot be thought as luxury product, but it is well suited for clothing etc. that are used in similar environment mersekats roam.

Because of their high intelligent and learnability mersekats can be taught several tricks and functions, and some mersekats have been kept as circus animals. There has also been known thieves that have trained mersekats to steal stuff for them.

Mersekats are intelligent animals, they are naturally curious, but also wary towards new things. They are able to solve small puzzles and they excel at group work. They have also evolved to have natural talent of reading peoples faces and emotions. They learn fast and are easy to train. The social learning between animals is also common.

Mersekats have excellent hearing, smell and vision. Their hearing can sense higher sounds than humans. They have trichromatic vision and their depth perception is highly evolved and they are excellent at estimating distances and area shapes. They have long highly sensitive vibrissae around their faces and at their front limbs that helps them to navigate underground and catch insects etc.

Scientific Name
Suricata domesticus
Lifespan
Up to 15 years
Average Weight
Miniature 400-650 g,
Average 650-850 g,
Large 800-1100 g
Average Length
Miniature 30-45 cm,
Average 45-60 cm,
Large 60-75 cm,
*From the tip of the nose to the end of the tail.
Body Tint, Colouring and Marking
The mersekat is usually different shade of brown (red pigment) with black, or sometimes brown, markings around eyes, ears and last part of the tail and same colored spotting or striping on the body. It is also typical that the undersides and the cheeks of the animal are lighter shade. There are often lighter spots above the eyes. Different degree of white markings are also quite common. The rarer colors of mersekat are cream, golden, grey and coal.

Be aware of rabies

Even thought mersekats are most beneficial animals to be kept around, one must remember that they do also carry parasites and diseases. Their long co-evolution with people have ensured it that many of those can spread also to people. So, it is most important to keep one mersekats healthy and parasite free. The most dangerous and feared of the diseases mersekats can spread is rabies, as it is a deadly diseases with no cure.

There are many tricks and potions to do so and this knowledge have passed through generations in the tribes keeping the mersekats. The only way to keep rabies from spreading to ones animals is keep those animals apart from feral animals. As keeping mersekats have spread to other groups of people has also the incidences of unhealthy, parasite ridden mersekats increased as the new mersekats owner do not know how to prevent or treat the parasites and diseases.

If there are no rabies problem in the area then there often are semi-feral mersekat populations near settlements as they are seen as beneficial animals. 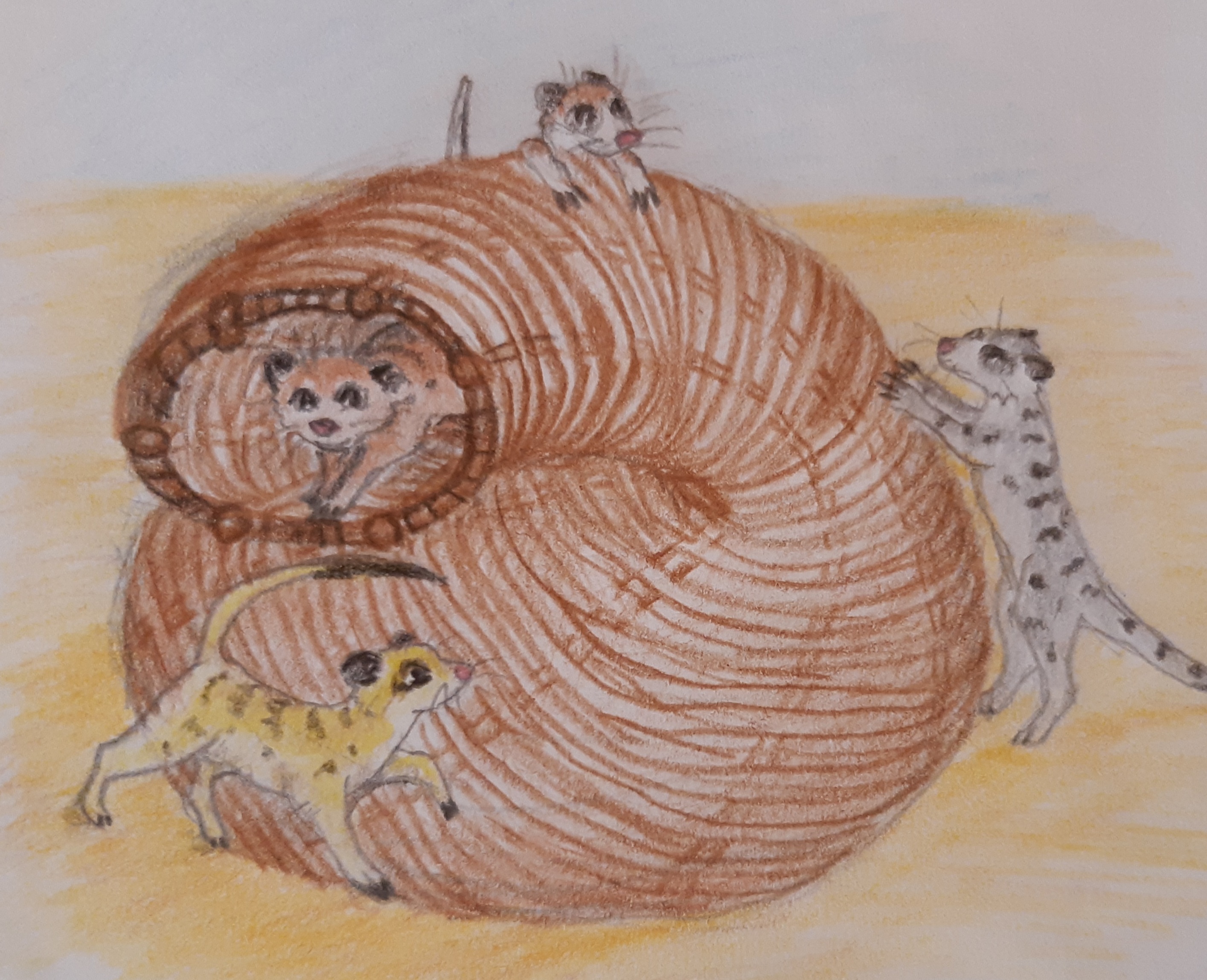 Answering: "a species of working animal"
Visit Nanzku's Competition Page Check all other answers to this prompt Competition Homepage