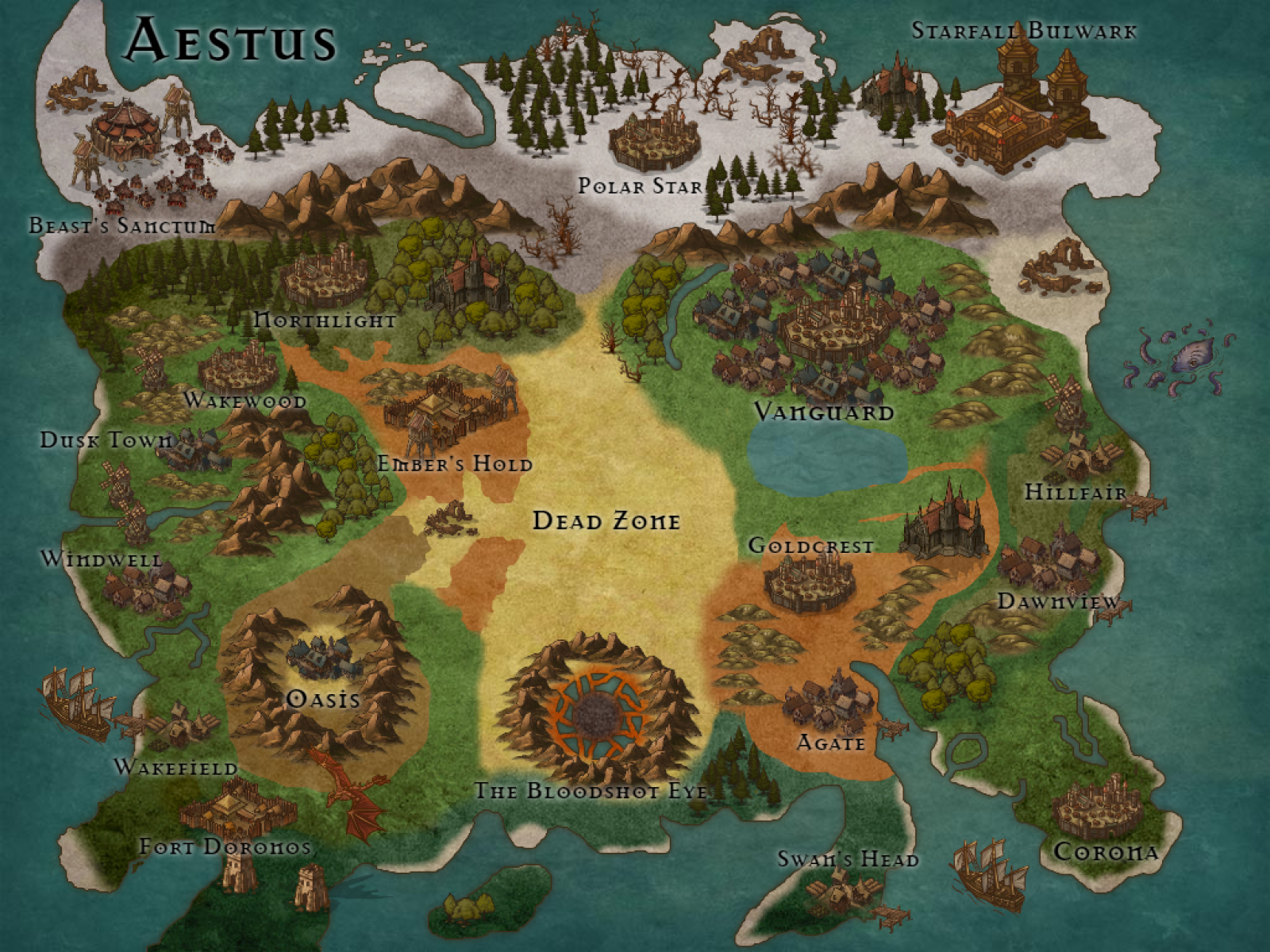 One of Sagrea's four main continents. A vast, rich land, finding Aestus was the goal of many adventurers in society's early years in hopes of earning its valuable resources. Eventually, the hopeful hunters were able to locate and map it out, and what a large, luxurious land it was!   ...Except for the fact that the only viable settlement spots near their desired loot were very spread out from each other, separated by various wastelands, deserts, or just plain old nothing, with each and every one of those plagued by its accompanying harsh weather. Discouraged, many of them gave up on settling, merely taking whatever riches they could find and leaving, with the exception of a handful of hopeful sailors. With an entire continent ripe for the taking, these once rival crews banded together to eventually form the Sunstone Empire, taking control of everything.   To this day, especially because of Sunstone Empire's reign, Aestus remains a land of hopeful riches, waiting to be taken by someone out there. As a result, its inhabitants and immigrants are often stereotyped as ambitious dreamers who aspire to make something out of this land of opportunity or as greedy kingpins who wish to take everything at the cost of everyone else's happiness.

While Aestus' variety of ecosystems and environments provide areas such as forests and a multitude of mountains, they are often separated by large wastelands, deserts, or extensively long rivers. This allows inhabitants to settle near a reliable resource bank, but the next city will likely be miles beyond a field or wasteland of nothing. This is especially applicable to the heart of the continent (known as the Dead Zone), which is home to large wastelands and violent winds that eventually lead up to tornadoes, evenly dividing the continent into two halves.

While plant and animal life thrive in the various biomes scattered across the land, including the wastelands, nothing but the most savage of monsters are able to survive in Aestus' Dead Zone. Creatures within it have adapted to find, capture and kill any form of sustenance it can hunt down. This allows them to survive without food for long period of time, as the Dead Zone is a constant war of brutality as well as attrition.

Aestus is well known for its abundance of precious metals and gemstones. It is common for travelers to venture into the continent in hopes of gaining solar iron, Aestus' most well known resource. Known for being able to conduct large amounts of heat without melting once used in an alloy, along with its soft, orange glow upon being struck, solar iron is prized for its usefulness as weapons, armor, and most mundanely, crystal-powered heaters.
Type
Continent
Included Organizations
Owning Organization
The Sunstone Empire