A capstan is a vertically positioned drum that is rotated by either human, steam, diesel, hydraulic, or electric power. Around the drum one can wrap a line and pull it with a lot more power than a man can do with just his hands.

On the first sailboat's lines where pulled straight with the hands, maybe a single rudimentary block and tackle was used to gain a mechanical advantage, but with the sizes of the boats that was hardly necessary.

No one can tell for sure when the first windlass was invented, whether it was on a boat or in a building. But the first designs where horizontal placed logs supported on either end. A line was wrapped around the middle. They were turned by bars slotted in the sides, usually both ends had a minimum of two holes. The bar was inserted into the top hole and pulled down ninety degrees. Then another person on the other side of the windlass would insert his bar in the top hole and start pulling. The first person would remove his bar as it could not pass underneath, and wait for the second person to make a quarter turn and then insert his bar again. Not only where these windlasses used on boats, but they were also used in castles to raise drawbridges and portcullises.

From these windlasses with a horizontal axle, the capstan with a vertical axle evolved. The advantage of the vertical one being that the bars for rotating did not have to be removed and inserted back again. And one could push rather than pull. Also capstan’s could have multiple people pushing simultaneously, greatly increasing their use. On the biggest capstan’s in the age of sail, their vertical axes passed through the deck, having sailors pushing on two decks simultainiusly. Their numbers could reach as high as 260. 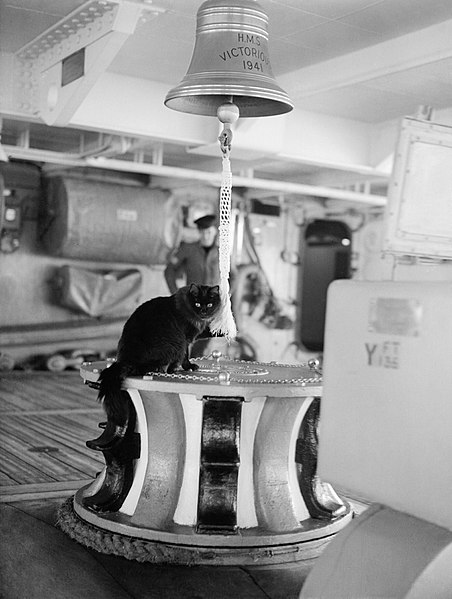 Psst do you want to know more about ship's cats? Click here. 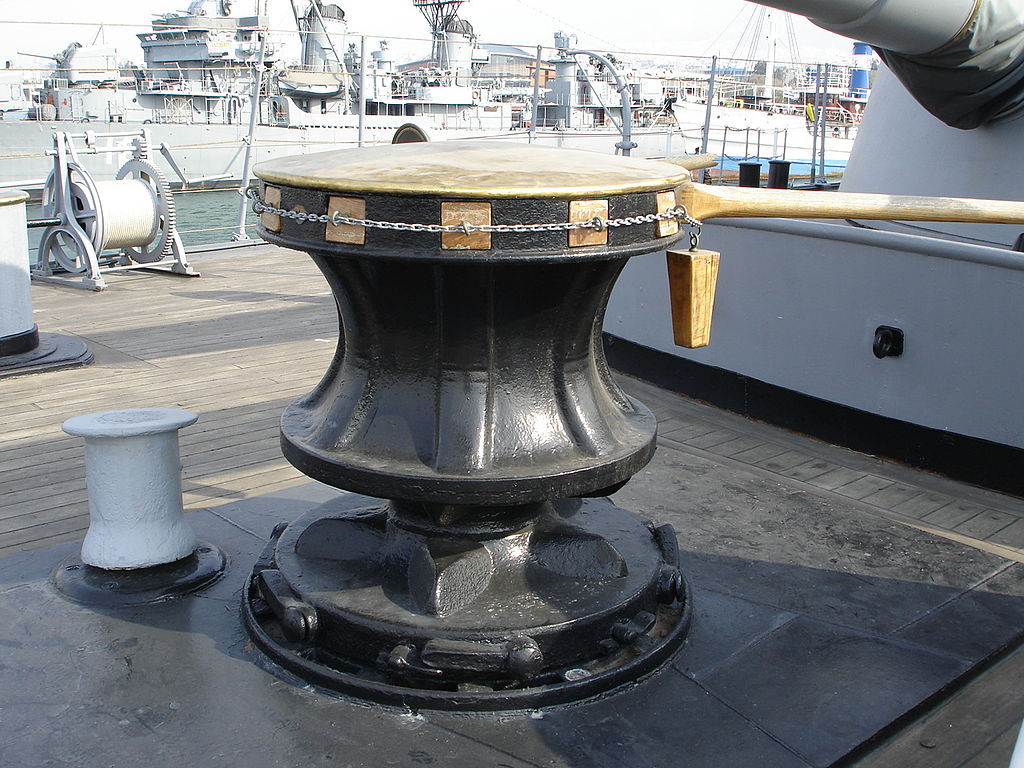 The capstan of the Historic Battleship Averof, in Greece. (note the double drum, bottom for chain, top for rope) by Χρήστης Templar52 via wikimedia commons

The first capstans were simple wooden drums with holes for the bars and ribs to increase friction on the rope that was pulled. Near the bottom ratchets were placed to prevent back turning. These were simple designs and relied on weight to catch the slots in the baseplate. Lifting these ratchets up and turning them over allowed for the capstan to work the other way round.

The bars used for pushing numbered between two and sixteen. The bars are secured in place by running a rope around the outer ends of them, creating a circle.

With technological advancement also the capstans where developed. Instead of being of wood, they became of steel. And after that, they even had gears inside them that allowed a mechanical advantage. The drum would turn slower, but gain in torque. The most evolved once that still relied on human power even had switching gears, by turning the other way the gears would change.

As soon as steam power became widespread on board of ships, capstans became powered by steam as well. First, their design still featured the holes that allowed the bars to be slotted in, as a back up, but these soon disappeared.

After steam came hydraulics and then electricity. And some capstans are even powered by diesel engines. 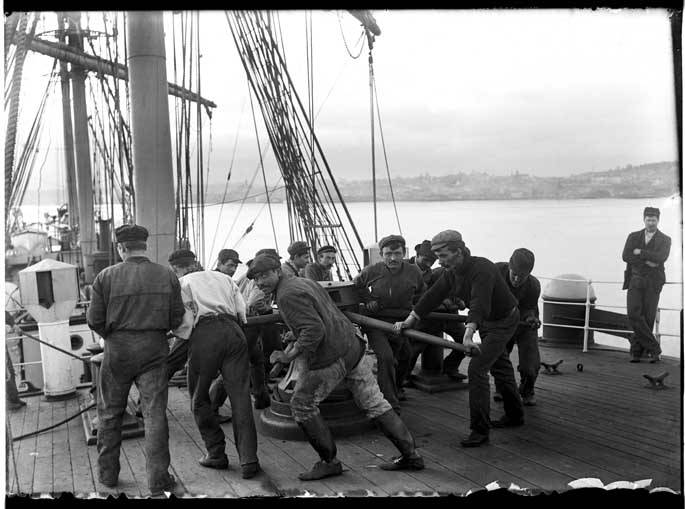 Round the Capstan, ca. 1900 by Unkown Author via wikimedia commons

Capstans, winches and windlasses on the
Sunset Dawn

The Sunset Dawn is equipped with several capstans, winches and windlasses, most of them to handle lines for sail handling. But also for anchor lifting and tightening mooring lines

From fore to aft. 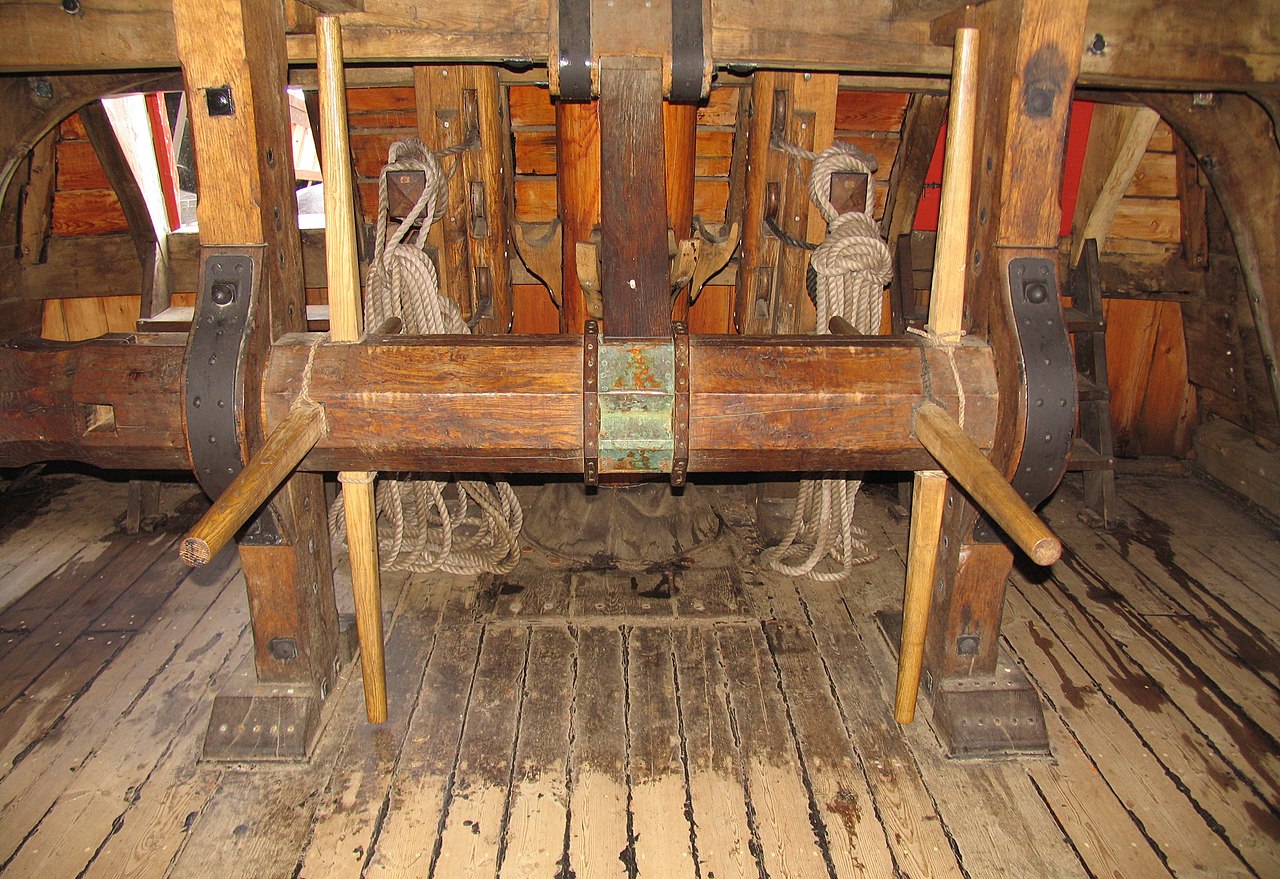 Capstan vs Winch vs Windlass

A capstan is a drum or spill with a vertical axle. Rope or chain is pulled with it and wound around it a single to a few times but not stored on it. A winch and windlass are drums or spills on a horizontal axle. The drum on a winch is used to pull and store rope or chain. The windlass is only used to pull the rope or chain.

The main capstan of the Sunset Dawn is placed just aft of the foremast on the main deck. It has eight bars and can be pushed around by sixteen sailors. It does not, however, pull on lines or chain directly. The capstan drives a hydraulic pump hidden inside. It is designed to look like it can pull a line; the body is shaped like a drum with ribs and all, but it lacks the ratchets that will prevent back turning. The hydraulic pump is not driven directly but trough a set of gears that increase the revolutions to get a greater and more constant flow. Turning the capstan clockwise, the gearing is quite low and the working pressure of the hydraulic system could be reached by four sailors, but it would take a great number of turns. Turning the capstan counter clockwise makes the gearbox switch gears, a greater force is necessary, but the pump is spun much faster increasing the flow of the hydraulic oil, and the working pressure is reached much faster. But it requires all sixteen sailors at the bars.

To prevent the capstan of spinning back a check valve is placed in the delivery line of the pump, preventing oil of going back into the pump and turning it into a motor. This has the same function as the ratchet on older capstans.

The Sunset dawn is equipped with sixteen different hydraulically powered winches or capstan on deck to handle the lines for the sails and anchors.
On the gun deck the twenty-four guns are rolled in and out of their gun ports by hydraulically driven windlasses too. These windlasses use the same hydraulic oil system.

The main capstan does not have to be spun every time a winch is used on deck, the hydraulic oil is pressed into two accumulators placed on the gun deck below. With regular sail handling charging the accumulators is necessary twice a day and takes about twenty minutes each time. Alternatively, the hydraulic pressure can also be provided by a pump placed on the auxiliary engine. But these don’t always run.

Capstans are used to pull lines and/or chain. This could be any line to handle sails and spars, halyards, braces and sheets. As well as mooring lines and anchor chains.

When anchor chain came into existence. Capstans evolved with them. A special drum designed to grab around the links of chain was designed and placed underneath the drum for the rope. The way this drum locked the shackles of the chain in place ensured 100% friction, and several loops around the drum as was the standard with rope, was not necessary anymore. The anchor chains just pass around the back of the capstan and then go back forward through a hole in the deck into the chain locker. No messenger line was needed.

In fiction, sometimes the capstan is placed around the mast of a ship. This is, of course, undesirable in reality. As the mast is firmly secured in the deck and gets its support from that. Why would you place a mast inside a spinning object? Also, a lot of lines come down from the mast and are tied off near the mast base on deck, interfering with a possible capstan. And why would you build a capstan around an axle of the thickness of a ship’s mast, when a much smaller axle would suffice.

Capstans are usually found near the water, where they were or are used to pull ship’s mooring lines ashore. Or even to shift ships along the quays. Also, they were featured near locks a lot where they were used to open and close the lock doors. A windlass could be used for this purpose as well. As a windlass and a capstan can only pull a rope. A pole was attached to the lock door, this pole had a rope from one end to the other, and in the centre this rope was wound around the capstan or windlass, by turning one way one would pull the door, and by turning the other way one pulled the free end of the pole and pushed the door close again. 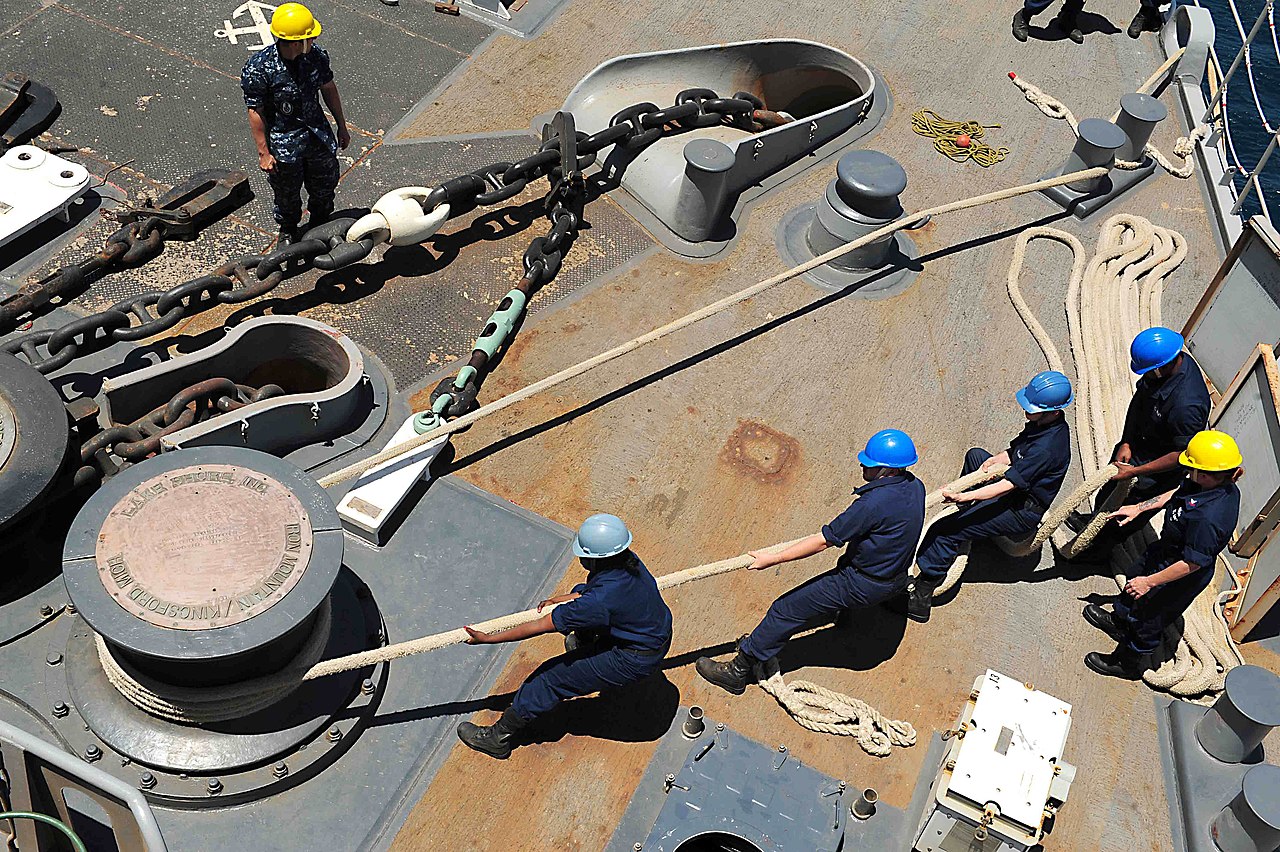 Sailors onboard the USS Gunston Hall pull a mooring line with the help of a capstan. by Mass Communication Specialist 3r/U.S. Navy v

This article was written in response to Amélie I. S. Debruyne her challenge: Unoffial Technology Challenge. And it gave me a nice opportunity to think about all the lines on the Sunset Dawn and how they are handled, time to update that article and the drawings!