I still remember the first time I ate yntxol. I was reluctant— being a picky child who seldom tried new foods. My father peeled it for me, and smiled as he placed it gingerly in my hands. I sniffed it cautiously, and looked back into his eyes for reassurance— before taking a bite of that sweet minty citrus. A taste I would never forget.
— A Rektouzk trader

Preferred Climates
Hot, sunny
Average Height
3-4'
Yntxol plants produce a minty citrus loved the world over, a fruit treated even as a delicacy in the farther corners of the world. 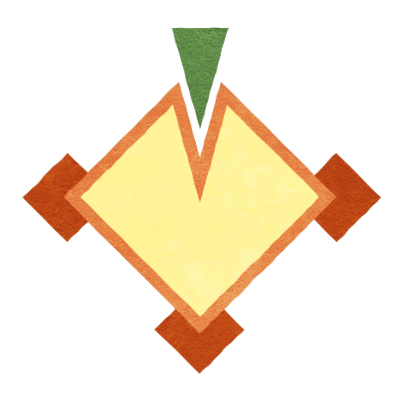 Mature Yntxol plants tend to stand 3-4' tall, their pale-beige trunks being generally featureless and smooth up until the top 6" or so where a number of branches extend straight outward, topped by fat faded-green leaves protecting the fruit beneath them.   The yellow fruit itself is of an almost flat square shape— though slightly lumpy and varied— with raised pale green ridges running along the center of each side. This is all topped by a short green stem which connects the fruit to the branches above.   The interior of the fruit, once peeled, takes on a green-yellow hue. While it may appear to be divided into "sections" these cannot be easily split apart. Seeds are contained within each of these sections.

A few months after being planted, the small, pale-yellow seeds from the yntxol fruit sprout pale-green stems. These grows over a much longer period of time, slowly gaining the pale-beige coloration of a matured plant. Before long, small branches begin to split off the trunk, and leaves begin to sprout.   On average the yntxol plant takes around 2-3 years to begin producing fruit. At this point, small, reddish bulbs begin to show underneath these branches, and grow in size, shape, and color over the course of 6-10 months to become edible fruit.

Yntxol fruit is highly sought after, and is one of Zilopnou's? largest exoports, as the climate of the Cipou Canyon? the country resides within is perfect for the citrus to grow. As yntxol is native to the canyon, it has become engrained in zilopnou cuisine. It is most often used to make deserts and beverages, or dried as a snack.   It's taste is strong, and may take some getting used to for the inexperienced. Yntxol fruit carries a tart, sweet taste with a strong mint flavoring. If one were foolish enough to bite into the peel, they would find it to taste similar— yet without sweetness.

Food that heavily features maize and other ingredients from within Cipou Canyon.

A spiritual people, who believe that all natural things deserve respect.

A legendary spear, a stolen god— the source of many legends.

Yntxol plants produce a minty citrus loved the world over, treated even as a delicacy in the farther corners of the world.

Food that heavily features maize and other ingredients from within Cipou Canyon.

My mouth is watering reading the description of the fruit. Sounds like it would be delicious. Also that rhyme at the end is fantastic. :)

Haha I literally added the rhyme at the very end of editing this as a throwaway to make the formatting jive better.