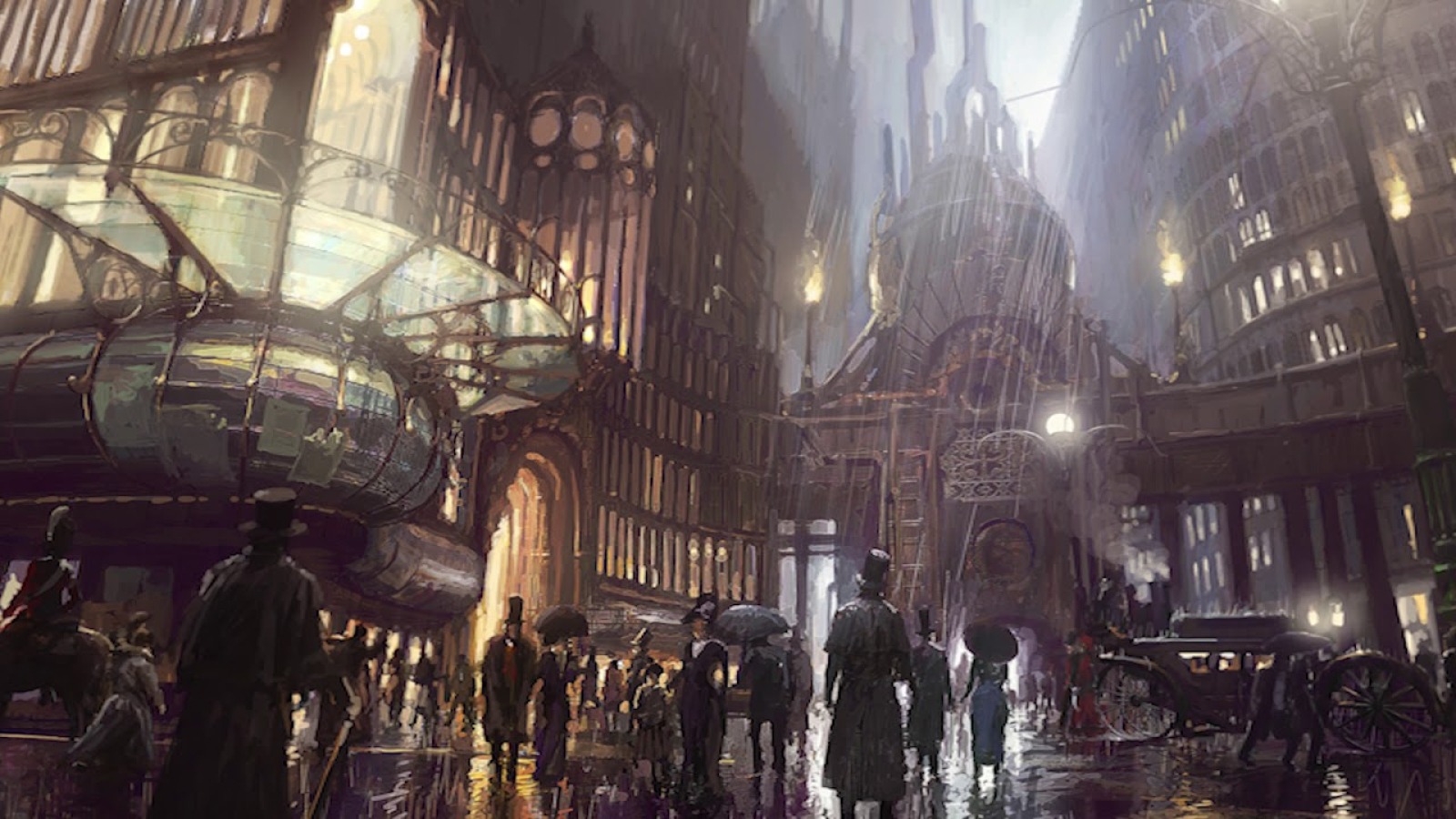 Pneu-York is the kind of city that never sleeps. Gears always turning, steam always whistling, lightbulbs or light spells always on. Even the abandoned sectors, those run-down neighborhoods at the very edges of the city, even there the city’s in full swing, if you know where to look. I'll give you a hint: check the underground. Uptown folks need special permits to access the network of pipes and valves that power our urban machinery, but for those in the know, it's as easy as popping off a manhole cover and shimmying down the chute until you reach the second city, a seedier city, and within it a little hole-in-the-wall speakeasy known as Baba's.   Which is, of course, where you all are now. Right in front of the door, that is, with a gruff-looking dwarf with an axe as big as she is standing in your way.

Inside, the lights are hazy, their warmth soaked up by the burgundy wallpaper and dark wooden floor. As you come down the stairs, you can see the gambling den to your left—patrons gathered eagerly around card tables, rolling dice and playing cards. A Tabaxi with an orange tabby coat purrs at his opponent as he claims the ludicrous number of coins in the pot. He smiles rakishly at you as you walk past him.   Smack dab in the middle of the speakeasy floor is a stage, circular and several feet high so everyone can get a good view of the performers. For now, though, it is unlit and empty except for a microphone on a stand. As they wait for the show to start, patrons sit and chat at the tables surrounding the stage, their faces lit by the glowing orbs that hover above each table. A woman laughs, and all heads turn to look at the gorgeous, golden-voiced human woman kissing her gnome boyfriend on the nose.   Those who have no interest in gambling or pretty showgirls sit at the bar by the far wall of the speakeasy. The bartender is an automaton of gray steel and brass goggle-like eyes. He mixes his drinks as quickly and methodically as only a machine can, but the patrons don't engage him in much conversation. Seeing your approach, he gives an awkward little wave.

The party gets drinks from Auto, who says in a soft, unsure voice, "Do you... do you want to try one of my experimental elixirs? Free of charge. Most people say no, unless they're drunk already, but, uh, they're safe, mostly, and Baba says they give you a hell of a kick. Whatever that means."   Caspar gets an elixir that allows him to fly; Dusk gets a healing potion; and Lot gets a "boldness" potion. DM Decision: Caspar's and Lot's potions last an hour rather than ten minutes.   You can also socialize with Jimmy and Nora over drinks. The gnome seems a little too interested in everything, asking questions about why you’re here and how you found this place, all with a wide-eyed naivete that paints him as an honest, enthusiastic soul.    Lotti and Nora have some catty back-and-forth.  Jimmy is convinced by Caspar that flying is a natural trait for a half-elf. He mentions that he and Nora met when she was looking at a window display outside a store. He asked her to come home with him and she said yes. They've been dating for about a week, and this is their first big outing together.   Trick also comes over to introduce himself, addressing Auto like an old friend. He notices the cards hidden in Caspar's sleeves. but says nothing.

Finally, Nora’s act starts, and she’s pulling out all the stops: dancing lights as spotlights, unearthly chorus as backup singers, prestidigitation sparkles. As she holds the final note (for a very long time—people are literally counting the seconds), a loud gurgle comes from one of the tables. A glass falls and shatters on the floor as Jimmy keels over. Nora freaks out—she can't heal him, she’s used all her spell slots on the show!   Despite Caspar's best efforts, Jimmy is "very dead." The party investigates his glass and finds that he was drinking beer laced with some kind of non-magical poison.   Baba comes out to deal with the commotion. Someone suggests calling the cops.   Nora: “No, no, no cops!” Baba, in a thick PNY accent: “All cops are bastards, and we're runnin' an illegal speakeasy here. I need this settled quickly and quietly so we don't get the authorities involved.”   Nora asks to speak with the party somewhere more private. She, Baba, and Auto go into the kitchen for questioning.   The kitchen doesn't show any trace of poison, though it does have some unusual ingredients for Auto's alchemical experiments.

Nora admits that she suspects Jimmy to be a cop and was intending on feeding him false information. Dusk searches Jimmy's pockets and finds extensive notes the gnome has written on the speakeasy, as if he’s been spying on it and its patrons.   When asked if someone could be targeting the speakeasy, Baba says that a rival gang could poisoned the liquor to sabotage the speakeasy's protection gang, The Sevens, who are also her rum runners.   At the mention of the Sevens, Trick shows up and says that the target might have been him. “I’ve been waiting for my Seven of Spades for a while now.” Apparently in his youth he had quite a large amount of gambling debts, which the Sevens agreed to pay off if he joined their gang. Then, on one lucky night, Trick played a card game with the mob boss and won enough to pay his debts and leave the organization for good. This counts as "betrayal" of the gang.   The party searches the card table for sevens, only to find them all missing. Trick claims he's got "no sevens up his sleeve," and questions Caspar. Caspar succeeds on a Deception check to convince Trick that he is the dumbest, most inexperienced person alive who doesn't even know what a card is.   Caspar then casts Detect Magic on the general area. He finds a PNYPD police badge sewn into Jimmy's coat lining, with some kind of divination spell attached to it.   Trick and Baba both mention a warehouse not far from the speakeasy that serves as a drop point for the liquor and a base of operations for the Sevens. The party agrees to check it out, taking Trick along with them.    Unsure of what to do with the police badge (Trick suggests stuffing it inside Auto, who protests that he's not made of lead), they decide that Nora should go back to Jimmy's apartment and plant it there, making it look like he got home safe. The party also wants to investigate the apartment later. They agree to meet Nora back at the speakeasy.

Flavor text describing warehouse. Seems like no one's here. The party stealths their way in. They notice that one of the piles of crates looks "off" and that one of the boxes has loose screws. They fail to detect an Alarm spell on the suspicious crate and open the box.   Inside, there is no booze at all, only a single playing card. The Seven of Spades.   Trick: "Ah, shit. "   Three goons show up at the door, blocking the exit. TO BE CONTINUED.