Sometimes called The City of Guilds, Kaerwyn is renowned for its craftsmen, its trades-people, bardic colleges and inventor's fairs. The city was originally established as the fiefdom of House Beauclaire, one of the Knightly Pillars of old Iskandar who valued learning and artistry over warfare and holy mystique. Its design and invention were the cause of notable court debate during the city's planning. Many of the Knightly houses were agitated at the idea of inviting Dwarves from the northern lands of what would become Drin in the following centuries to assist in its construction after fighting so hard to gain foothold in the Dawn Realm and make a sovereign land of their own. With some convincing House Beauclaire did eventually sway the other houses towards their vision and in due time Kaerwyn became a center of learning and craftmanship in the Dawn Realm.   Kaerwyn is largely responsible for the immense and powerful naval armada that belonged to the Knights of Iskandar. Here, boats and warships were built and sent southward along the Angel's Ribbon to the city of Saeref and Sigil. This made Kaerwyn an extremely wealthy fiefdom and brought prestige and honor to its citizens, and since the occupation of the Dawn Realm by the Magisterium, the city's wealth and status has grown even more so as ships are built and fletched across the Sea of Mithris to add to Dalair's own naval force.

Beyond shipbuilding, Kaerwyn's title as the City of Guilds harkens to its vast organizations of various crafters and trades-people. Armor crafters, weavers, playwrights and all manner of skilled inventors make their home in Kaerwyn, for it rests at a center point along the Angel's Ribbon, receiving vessels and merchants traveling between the duchies of Bastelle, Saeref, and Vrynn which provide patronage to their crafts. Kaerwyn's various colleges and craftsman guilds have earned enough renown to also receive the attentions of the Marrigold Merchants in the Freelands, and also boasts a unique tie to the lands of Drin. The Dwarven clans that were invited to build the city brought with them long standing familial ties to the industrial nation of the north and thus some of the technology and inventions of Drin, such as electric light, have trickled here. 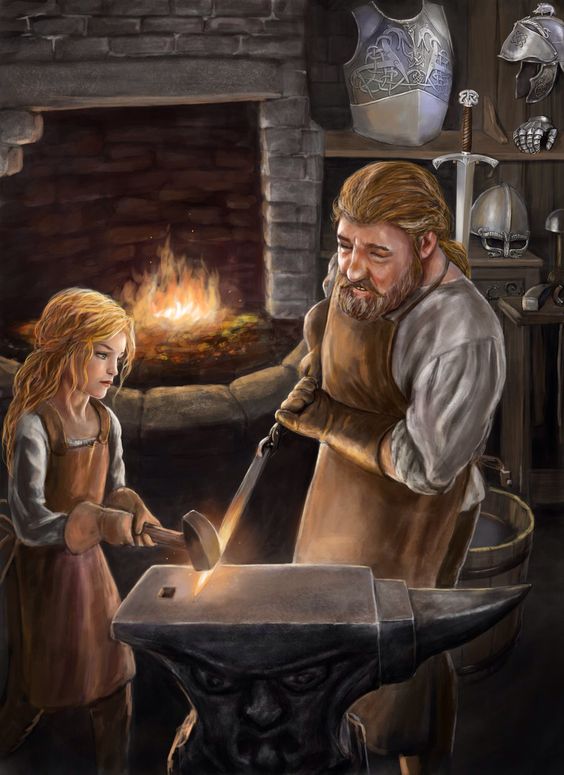 Dwarves are not normally associated with Iskandar, but if someone of the stout folk call the Dawn Realm their home, they are without doubt descendants of the Dwarven families that have long stead here. Originally four Dwarven clans were invited to the city of Kaerwyn to assist in House Beaurclaire's development of the fiefdom; These were the Hogirons, the Steel-Throats, the Numenroc, and the Loden. While there have certainly been long standing feuds between these families, they are all largely considered one clan after centuries of their descendants tying cordial knots.   Other curious denizens of Kaerwyn, and quite recent arrivals, are the Dragonborn. The Dragonborn possess a precarious history with the other natives of Iskandar. They are the original caretakers of this realm and those whom were dispossessed of it during the conquest lead by Ellemex and the Elysium Knights. There is a remarkable hatred of the Dawn Realm's conquerors that still echoes from this past wound, and the Dragonborn have largely been treated as savages by the Elves and Men who took their lands.

A central keep with walls and fortifications encircling the craftsman guild halls are the dominate images when one is visiting the city of Kaerwyn, but surrounding the keep is a sprawling cityscape trickling away into robust farmland. Vessels and ships arrive and leave from Kaerwyn almost as steadily as their sister city, Saeref, to the south, creating the impression of a string of flags hung between the cities as sails unfurl to the gentle winds. 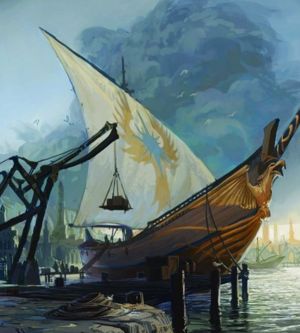 The naval strength of Iskandar is simply unmatched in the world of Orr. Legend speaks that the secret of building such fine boats were brought by Orrlanden, a disgraced Jarl of Aardwulf who was driven from his throne in Mosin Deep and arrived at the shores of the Dawn Realm during the time of its conquest by the Elysium Knights. Appearing at first as a raider and terrorizer of the Knight's effort, Lord Ellemex convinced the brash warrior of the seas to join him and in turn his efforts and bravery sired a Knightly lineage in his name.