Death and Resurrection in Dungeons & Dragons (5e) lacks dramatic tension from my experience with the rules as written. This article acts as a guideline for adjusting these mechanics to evoke a greater sense of danger, and permanancy should a character fall in battle.

When a character in reduced to [0] Hit-Points and fails a Death Saving Throw, this failure does not 'reset' upon regaining Hit-Points from a spell, consumable item, or other character feature. A character retains their Death Saving Throw failures until the wounds are treated, or has rested for a number of days corresponding to the level of wound they received.   Wounds and how to treat them are described in greater detail in the Injuries & Hit Dice article.   What do we say to the God of Death?: Death Saving Throws are rolled at the beginning of a character's turn rather than the end of their turn using this homebrew ruleset meaning that if a character does recover from Dying they can take their standard action, use their movement and any other bonus or free actions that are available to them.   Only the Endless know your fate: When rolling Death Saving Throws you must 'whisper' them to the Dungeon Master. While players can attempt to use a medicine check to determine your overall condition at a glance, only the gods know your true fate.   Heroic Recovery: When a character is roused from death by succeeding on three Death Saving Throws, or rolls a Natural 20 for their save, they have made a 'heroic recovery' and regain hit points based on their CONSTITUTION modifier (A character always recovers with a minimum of 1 Hit-Points).

In the rules as written, whenever a character suffers damage of any kind, or magnitude while at [0] Hit-Points they automatically fail one death saving throw. This means that whether the character is caught in the blast of a Fireball spell, or kicked by an enemy combatant while lying on the ground, the injury is treated as being equal in severity.   This homebrew changes this mechanic so that damage for any attack against a chacter who is unconscious, and bleeding out is still rolled, and the damage of that attack, or spell determines how many automatic failures occur.   01 - 25 = 1 Automatic Failure
26 - 50 = 2 Automatic Failures
51 - ** = 3 Automatic Failures / Instant Death

Because these mechanics greatly increase the odds of a character dying, a number of new assisting actions have been added in order to give the party the ability to aid their fallen ally in their time of need.

Shield From Harm: As an action on their turn any character who is within 5ft of a fallen ally can choose to 'shield' the fallen character, and suffer any damage that their fallen comrade would take in their stead. This is represented by the character putting their body between the enemy and their fallen compatriot. Attacks and spells made against the fallen ally still use their AC, not the shielding players.   While shielding another player from harm, if a spell or ability with an area of effect would cause a player to roll a saving throw in order to mitigate or avoid damage, the shielding player can choose to automatically fail in order to prevent their fallen ally from being wounded.   Swear Off Death: As an action a player within 5ft of a fallen character can Swear Off Death. This could be represented by a player praying to one of the Endless for the ally's protection, a warrior pressing his hands to the wound of the fallen character in order to prevent them from bleeding out, or a character attempting to quickly bandage the injury with the supplies from their medicine kit. This grants the fallen character Advantage on their Death Saving Throws. 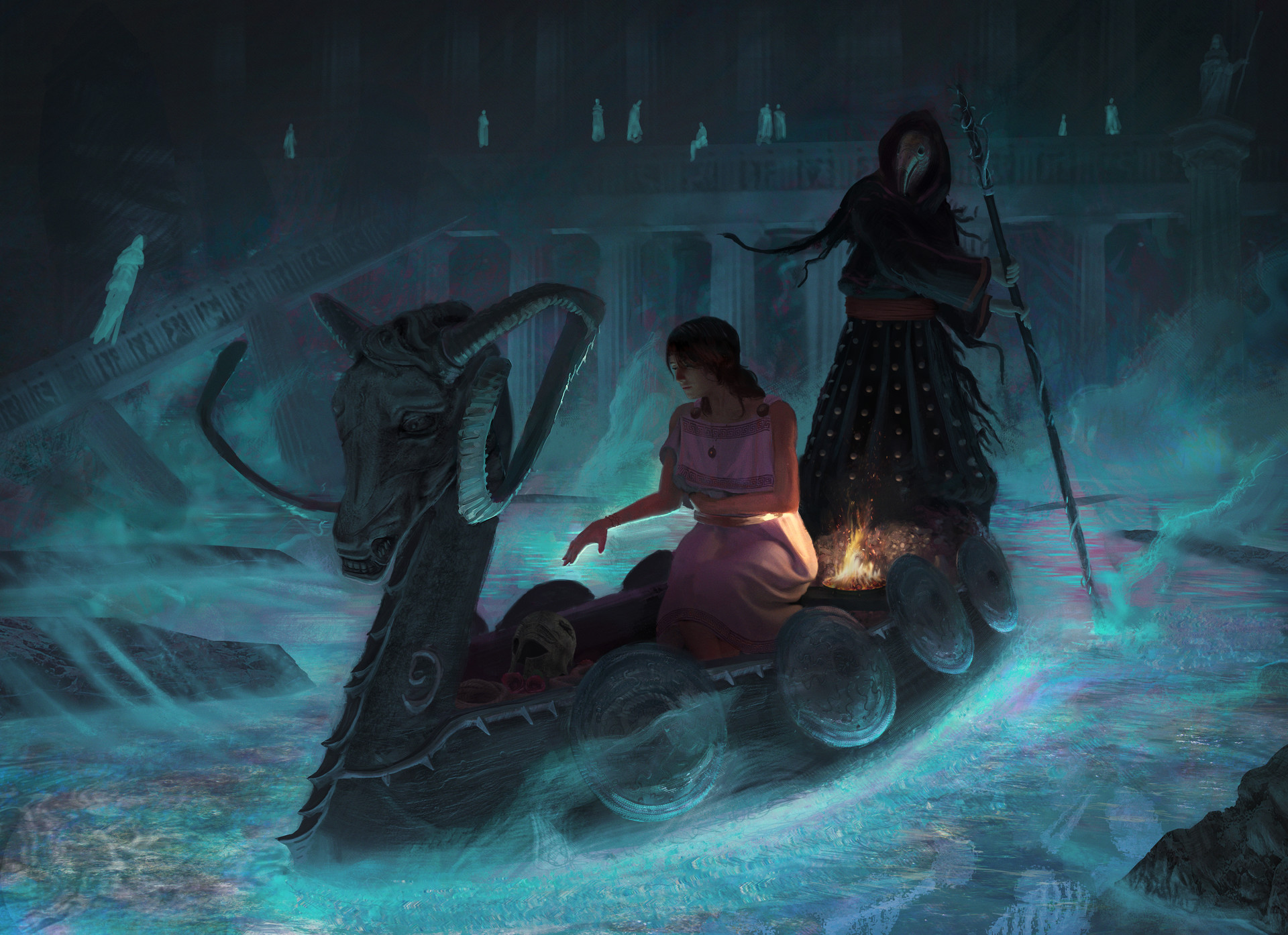 Travel on the River Styx by Nick Jacops

Returning to the realm of the living after Death is a miraculous feat associated with the most legendary figures in all of myth, literature, film and other mediums. In Dungeons & Dragons (5e) this substantial journey is a somewhat mundane experience that can be completed by simply casting a spell with the required materials. I do not feel as though this reflects the significant nature of this feat and the homebrew rules below have been designed to add more weight and difficulty to return from the dead.

When a resurrection spell has been cast, the soul of the character who is being summoned back to the realm of the living undergoes the challenge of wading against the current of the River of the Dead back to the Prime Material Plane. This journey is frightening, weighted, and requires a deep level of determination in order to succeed. Each time their soul passes through this river the journey becomes increasingly more difficult.   This difficulty is represented by a Resurrection challenge. The challenge level of this feat is determined by the number of times the character has died and the preparations that have been made in the living world for their soul.   Resurrection DC = 10 + 2(number of deaths)   When preparing the Ressurection spell, the friends and allies of the fallen character can make up to [3] offerings to decrease the Resurrection DC and give their compatriot a stronger anchor to the realm of the living. The DC for each of these preparations is always the same as the Resurrection DC, and can only be attempted once.   These preparations can include prayers to the Endless (Religion), expressions of grief (Persuassion), creating aromatics and tonics to ease the transition of the soul back to the body (Herbalism), or any other check that may feel appropriate in the moment. Each successful offering lowers the Ressurection DC by [2].

The Power to Overcome Death...

The ability to restore life to the dead is rare and used only in extreme circumstances. The few spells and magical arts in the world that allow a soul the opportunity to return are known only to select priests and wizards. While the arts themselves are spoken of and perhaps known of by the greater world, it is unlikely except in the largest cities and settlements of a given region that one could locate a practioner of this magic, let alone convince them to invoke it.   When a resurrection spell such as Revivify, Reincarnate, or Raise Dead is cast by a player character rather than a powerful practioner the Resurrection DC is increased.   Resurrection DC = 13 + 2(number of deaths) 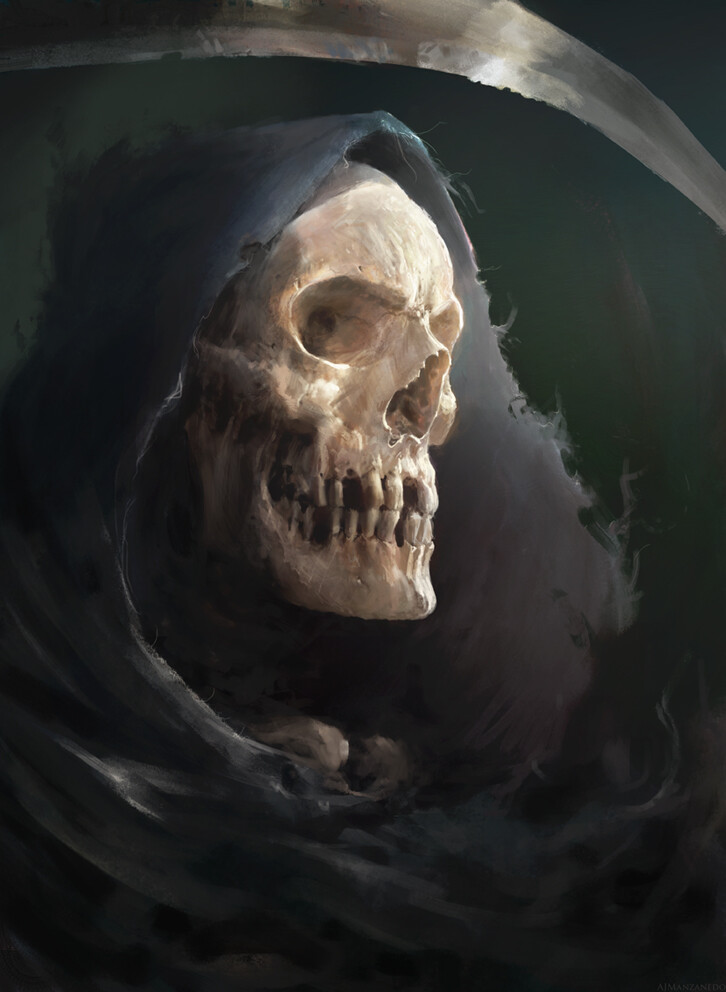