The grey man has a pale face and dead grey eyes. He is tall and thin, wears an old and raggedy suit grey, his hands are cold and clammy, and his mouth is big with sharp teeth. A fog follows him, and all life withers after him. He takes away disobedient children that won't go to bed when their parents told them to.


-Aunty, I'm not tireeeed. I don't want to go to bed.
-But if you don't go The Grey Man will come to get you!
-Why would he want me? I don't have powers anymore.
-He makes no difference. Powers or not, you need to go to bed in time.
-The myth won't work as a threat for much more time with this girl.

In all the big cities every parent and child knows The Grey Man. The parents know it as a tale to scare their kids and convince them to go to bed and sleep and have a moment of peace, the kids sometimes have nightmares about The Grey Man, depending on how keen their parents are to make them afraid or their own imagination.


The myth, as many do, has some roots in history. When Big Dreams Corp became powerful with its plan approved for the government to control the super kids, many men lurked around playgrounds, parks, and schools controlling the devices fulfil its purpose and the adults in charge of kids were using it. The rumours around this company's employees grew and morphed into the urban legend of The grey man.


Big Dreams Corp realised that having employees lurking in public spaces was bad marketing. They tried different ways to make them family-friendly by changing their clothes or even using clown costumes. It didn't work. The only result was to make them more creepy and spread worse rumours.


-I would beat the grey man in a second! I can throw rocks at him, and Shiny can make him stumble and fall!
-I would hide with Lindek and run away. That's easier.
-Donita would help me to punch him super fast!
-Kiddos, none of that would work. Now go to sleep.
-Tomás, Seye and Ola on a sleepover at Seye's home.

On Nychaneh the parents also tell the tale of The Grey Man, but it doesn't have the same effect. The kids feel safe in The Town because they know the whole reason they are there is to be protected and free. That's why when an adult starts to talk about The Grey Man the children come up with plans to defeat him and amuse themselves inventing increasing wild and absurd schemes where The Grey Man is always defeated.


They still follow the bedtime tradition to keep him away because turns out is a good way to make the kids relax and make them sleepy. 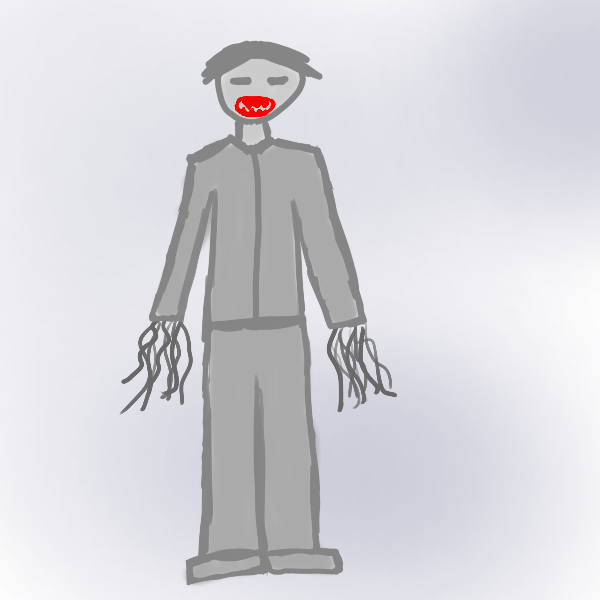 Answering: "a myth or urban legend about a "monster""
Visit Julian Ralid's Competition Page Check all other answers to this prompt Competition Homepage