Rena is independent, diplomatic enough to be perceived as friendly by acquaintances, but aloof enough to be seen as collected and cold by outsiders. She is driven to unique locations and whatever subjects of study pique her interests, and she desires freedom from societal and familial expectations. Alongside these traits, Rena genuinely has the capacity to be cold; to encroach too deeply past her boundaries is to evoke callousness and avoidance from her.

Diplomatic., Collected and cool (in the sense of being calm).

Rena was raised in a well-off family with considerable assets and grand plans for her life. Plans that she had no say in. Seeking to capitalize off their children, her parents urged her into her intended role: receiving a basic education and being married off in attempt to forge a loose "alliance" between businesses. Her younger brother, whom she was quietly jealous of, was intended to be the heir of their own family estate. Considering her innate curiosity and independent drive, Rena loathed her situation. To this day, she tries to avoid her family, even if she feels a sense of guilt for abandoning her brother in particular.

Rena is an academic—a self-assigned researcher, in theory—because of her curiosity and her drive to be free from her family. Originally, she pushed to attend college as a form of escape, but she quickly discovered a love for literature, folktales, and early psychology, which she gravitated toward studying. She is content with her job and, when she can, uses it to travel to notable locations and known sites of inspiration for novels and legends.

Rena is skeptical toward organized religion; it was used as a form of control in her family. However, she has a wavering belief in spirits, suspecting that a form of one might have haunted her childhood. She is open to the possibility of the occult existing and secretly hopes this is the case so she could study them, but she has seen no evidence outside fables for their existence.

(Now that I know the character better, I would like to change the memento to the scruffy cat on the list.) Her cat is a silver tabby maine coon, and his name is Argent. She found him as a malnourished alley cat while in the process of moving to Munson and took him in. The cat serves as a source of adorable companionship in her otherwise reclusive-leaning life.

The spirit that haunts Rena originally belonged to her family estate. It started out as a mere ghost story told by her family, but the longer she lived, the more potentially paranormal experiences she had, and the more she began to believe it. Perhaps it is merely her imagination, but she could swear it does mundane things for her on occasion—remove a stain from clothing, turn a page in a book to the source she needed, and the like. Realistically, it could be a spirit, it could be a strange Vaesen, or it could simply be luck.

Rena quickly found a kindred spirit in Celia Hooker. As a fellow suffragist, the two have much in common, and Rena admires Celia's resolve and political knowledge. Though the two have different focuses, Celia on physical labor and Rena on academics, Rena respects the hard, independent work that Ms. Hooker does.

Rhoda Pitcher is another individual Rena was quickly drawn to. As someone with a fascination with folklore that she shares and plenty of writing for her to review, Rena regards Rhoda and her work with interest. She often finds herself visiting the Black Horse Tavern to hear Rhoda's stories.

Rena heard of Calvin Packard's antics through Celia Hooker, and the academic quickly developed a disdain for the man before ever laying eyes on him. After one two many meetings with him, she is filled with a sense of agitation; he reminds her of the beliefs her family attempted to impose on her. 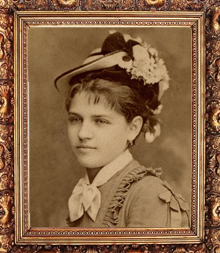 Resources: Financially stable
Memento: Bloodstained promissory note.
Advantage: Ever since she was a child, Rena suspected a spirit followed her. Usually, it is an inconvenience, but sometimes it helps her.
Spouses
Siblings
Children