The Ember King is like the Frost Queen the first man killed and First of the Dead in his realm. He was a fierce warrior once and a kind soul by nature, especially towards all kinds of animals. He knew that the most brutal predator was the human race, so his rage and sword was aimed at unjust actions. He took a liking in that, but his fellow human males did not liked it, so they lured him into a trap and smashed his body with large stones and sticks before setting him and his sword on fire. He screamed for a short time; jaw and rips and legs crushed, mouth filled with blood and rage.

He did not scream long and he woke up in a realm full of trees, volcanos, lakes and an ocean so vast he couldn't see any other lands. But his realm was so vast as an afterlife could be and he discovered that his hair was on fire, his bones were partly sticking out of his body and something left the skull of an unknown animal right in front of him.

And so this unknown warrior became the First of the Dead and the Ember King.


Creation of the Realm


At first the Ember King explored the volcanos, the forest and the nearby rivers. All of them lead into the ocean and he discovered that he could travel beneath the surface without extinguishing his fire or the need of air in his lungs. He was dead anyway, so why bother with breathing?

The next thing he learned was that he could summon fire spirits, fireballs, heat and ember. Some was on purpose, but transforming the deer in front of him into an ember deer was more of an accident. Not a happy one.

"Hm." grunted the Ember King who has learned his name a few moments after the poor dear collapsed and died out of fear. "Sorry about that, little fellow. I thought you were cold and wished for a thing that warms you."

As he looked around he discovered that one of the volcanoes was an entry to his newly found realm. And as the first men died in a clan war, they came and he learned that he was the one who assigned them their afterlife. There were many of them, ranging from flesh-eating bugs over bone-gnawing dears to meadows filled with meat, mead, music and massacre.

The Ember King noted it and found that a hot river came out from under this volcano with the entry to his realm. With his powers he crafted a gate and a house from molten stone and magma where he now has his home.

After the first warrior sacrificed himself to become an Ember Lord - which took the Ember King by surprise since he didn't know about the believers in the living world - and stood suddenly on his doorstep, the Ember King he made the warrior an offer.

"So, you want to become an Ember Lord?"
"Yes, my king."
"To what end?"
"To destroy the foes of my clan."
"But what if I tell you, that there is the way of creating and building?"
"My Lord?"
"I can give you the power of Ember to become one of the Scroched and help me buil this realm. I need four Scorched ones. Those are my counsellors, my trusted ones to filter the worthy from the unworthy who will become an Ember Lord and who is to be burned. Are you willing to go this way, child?"
"Yes, my Lord. I will be your first Scorched one."
"So be it."

So the first Scorched ones came to life and the Ember King sent one Ember Lord after the other back to their blood-spilling. Sometimes he created new Scorched ones to attend to his realm, but they roamed free around the place and did their duty.

The one thing he noticed after a while and his dead noticed as well: there were no women. What kind of realm was this without women?

"It has to be this way." mumbled the Ember King under his brittle beard, catching a few sparks in the hair.
"Why?" asked one of the stronger warriors, his skin sweaty from the massacre.
"Because they have an afterlife just for women."
"Why?"
"Yeah, why? What would you do with them when they were here? Rob them off their clothes, press yourself onto them? There is no honour in this and so there are no women in this realm. You are not worth." The warrior screamed in agony as his flesh began to burn and he was transported to a different afterlife in the realm of the Ember King where he could burn for all eternity.


"If you are ever tired of your duty as the ruler of your realm, you have a suite here as well as all other gods. Take your time, we will take care of your needs. You may bring your servants with you which is count up to a maximum of three. You may stay as long as you wish for.
Please do refrain from appearing out of thin air and please appear on our landing pads, a map is included in this writing. Every question you may have will be answered.
With kind regards


The Ember King is in love and in a relationship with a being he met at the first Winter Solstice called the Frost Queen. His heart broke as she told him her story and since she doesn't remember her actual name he couldn't find her former husband so he would end in the most gruesome afterlife. But he swore that every man who was cruel against his wife would end up in an afterlife they won't enjoy. In exchange he told her his story and both wept as they got married after a few Winter Solstices.


Despite being rendered as cruel, filled with rage and anger in the believes of the northern folks, the Ember King is a really chilled god. He appeares to be a short-sighted god who make rash decisions, but he thinks a lot about before making anything too hasty. Most of the souls in his afterlife see him as a lazy, forgiving god with a knack for forgetting things and, to a degree, a bit too soft. But those that lived a life without honour and misjudged the Ember King are now bound to their deserved afterlife, eaten alive or being burned for all eternity.


In his free time the Ember King is trying to create THE MEAD, a mead which will serve in the Caretaker's Inn as the drink of the gods. Literally. Well, one of those, but none of them had THE MEAD before. He is cultivating plans and bees so he can do as he wants. The souls coming in his realm sometimes bring herbs and spices with them, so he has a better chance to taste THE MEAD before deciding how to proceed.

Besides that he just hang out with the more modest souls in his afterlives, sometimes participating in the massacre and sharing THE MEAD with them. Partly as being kind, partly he uses them as test subjects. 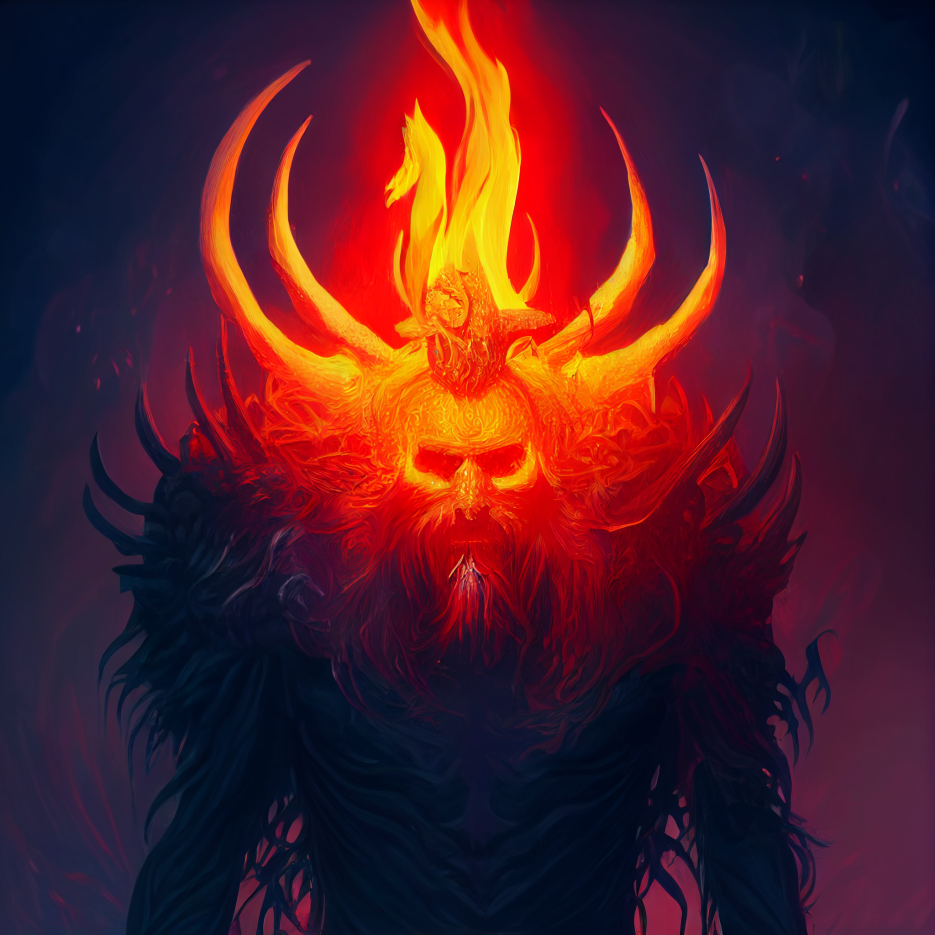