Mekki are a sapient species from Erret, though their evolutionary line traces back to Terra. Popularly known as "cat-people", the mekki are descendants from a species of highly intelligent (but not sapient) felids created by the Progenitors to test if humans magical abilities were an exception or would occur among more Terran sapients. 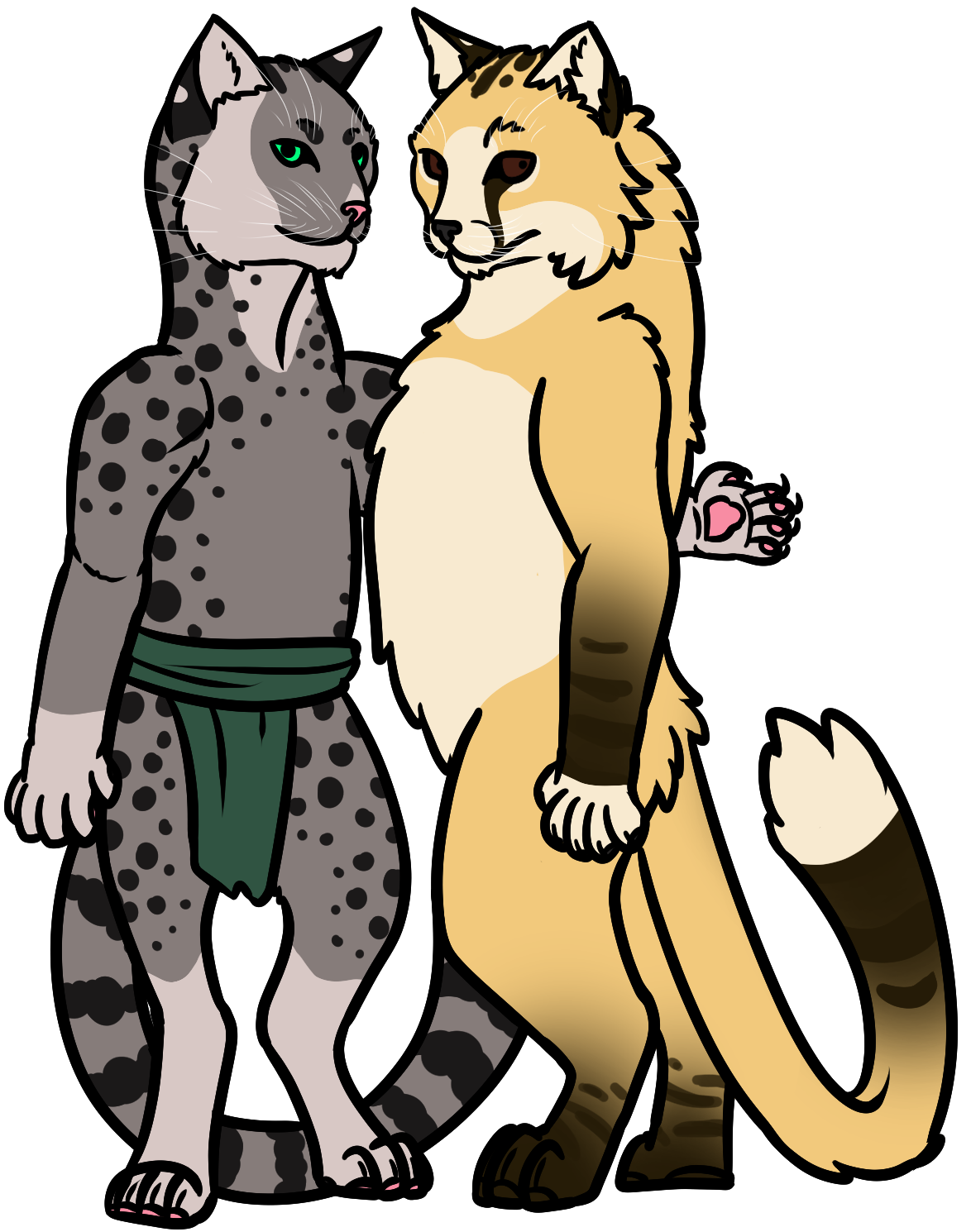 by DarkNymfa
Two random mekki displaying some of the species' variance.

Mekki are bipedal felids, descended from Terran felids. Possessing four limbs total, they stand on digitigrade hind legs which count four toes, and have arms ending in hands counting five digits (four fingers and an opposing thumb). They possess retractable claws on all digits on both hands and feet, have rough (grippy) pads on both hands and feet, and are excellent climbers. In a pinch, they can run on all fours, but they generally don’t to avoid wounding their hands. They possess long tails, which range between a third to half their body length. Their rounded heads vary somewhat in shape, but contain large binocular eyes with a tapetum lucidum, providing them excellent night vision. They have large triangular ears, whiskers above eyes, on cheeks, and on muzzle, and a tongue covered with horny papillae. They have 30 teeth aimed at consuming meat, a dental formula matching that of Earthly felids. Their canine teeth are large, and some mekki have exceptionally large canine teeth, known as saber-teeth. Overall, a mekki's anatomy resembles that of a feline far more closely than that of a humanoid, despite their bipedal nature.
Their entire bodies are covered in dense fur, though length and thickness varies. There are three variants: tropical, which have fur so short it can barely be distinguished; temperate, which have mid-length fur; and tundra, which have especially long and dense fur, deterring snow.

Mekki individuals vary greatly: beyond height, weight, and life span, various details about their appearance also vary: the type of their coat, the colors of their coat, and the patterning of said coat. None of these details are bound to any variable, however.

Mekki are induced ovulators, and thus do not experience ovulation or estrus outside of reproduction. They can reproduce at any time of the year, but can only have one litter per year. Their gestation period counts about 150 days (roughly 21.5 weeks), though it can vary by as much as 25 days. Their litters count two or three cubs at a time, who can come from multiple fathers.

Mekki cubs are born, like all felids, with their eyes closed, but with fur already present. Their eyes open between 10 and 20 days after birth. They reach their toddler stage (active walking around, first words, etc.) at around 2.5 to 3 months old, and it lasts until about 15 months old. During this time they also get weaned, typically around 1 year old.
Their early childhood, during which they are geared towards learning (originally to hunt, but now also basic childhood knowledge), starts after 15 months and lasts until they are 4 years old. At this point they move on to their ‘middle’ childhood, when their social and mental development kicks in, and which lasts until their puberty at age 6. Puberty is by far a mekki’s longest ‘childhood’ phase, starting at 6 years old and lasting until they reach maturity at age 10 to 12, though in social aspects it is generally counted until age 13. During this time they undergo all effects related to puberty and reaching bodily (and sexual) maturity, and learn to function independently. During their maturity (age 10-12) they reach sexual maturity, stop growing, and lose any cub markings they may have had (spots, full/darker blotches, etc.).
Originally, mekki lived to be about 30 to 35 years old. In modern mekki society, enough advancements have been made to push this further, and modern mekki thus live to be 50 to 60 years old. Full integration with galactic society, including access to all their medicines, can push this as far as 70 years old.

Mekki are obligate carnivores, and consume only meat. They have a long history of hunting, but modern mekki also keep livestock. They can ingest a little vegetation, but are unable to digest it, and it will thus likely make them sick. They are also unable to taste sweetness, lacking the corresponding taste receptors.

Mekki are largely unaffected, though some cultures are secondarily affected, as they hunt prey who react to the changing of seasons. Some temperate races may grow thicker underfur in preparation for the winter, known as a winter coat, but this is relatively uncommon: most either don't deal with heavy fluctuations in temperature, adapt to deal with it externally, or travel to follow their preferred climate.

Mekki are among the only members of their lineage who are social members, much like ordinary felids. Like with humans, the exact structures of their social lives varies per culture and time, though in modern times they have a global society, much like Terran humans.

Mekki have domesticated a number of animals and plants; animals for food and for byproducts (leather, fur/wool, horn), plants mostly for the fiber and as animal feed.

Much like the rest of their anatomy, mekki faces are especially feline, though some variances exists due to their hodgepodge genetic ancestry. Shape of the face, muzzle length, and narrowness of the muzzle are the main variables. Some mekki have enlarged canine teeth which their lips can't cover fully, known as "saber teeth". All mekki have dark ears with a single light marking on the back, though the shape of this marking varies per individual, ranging from spots, to bars, to crescents, and further. Their eyes are cat-like, with a rounded pupil and the rest of the eye colored. This eye color can vary greatly, going in a sliding scale from (reddish) brown to blue. Main eye colors are brown, orange, gold, yellow, lime, green, emerald, cyan, blue, and cobalt. Mekki with a lighter color type (dilute or pale) also have lighter (pastel) eyes, though the naming stays the same.

Mekki have keen senses, possessing excellent night vision especially adapted to distinguishing moving objects, highly sensitive whiskers, sharp hearing, and a vomeronasal organ: an organ in the roof of the moth which allows them to “taste” the air. They cannot, however, taste sweetness, as they lack receptors for sweet-taste. Mekki also have limited color perception, compared to humans. They see only muted colors, primarily blues, yellows, greens, and grays. Reds and pinks are closer to green in their perception, and purple is like another shade of blue to them.

Mekki use two-part names, which they receive separately. The first is a descriptor, given by their parents, which describes either them, or a value their parents wish for them (skitter(ing), rush(ing), jump(y)). The second is the name of an animal the mekki has caught as part of a maturity ritual. Not always about strength, they may also hunt something which requires stealth, ingenuity, tactics, or any combination thereof. As part of the ritual, they typically keep part of the animal, proving their right to the name.

Sexual relationships
Mekki have a very casual relationship with sex due to the mechanics of pregnancy among them. Females only release an egg if properly stimulated, requiring well-spined penises. By filing down their spines, or wearing a wrap which 'smoothes' their dick, pregnancy is thus entirely prevented.

Mekki overall have good relationships with other people across the galaxy. Though many are fine with life on their homeplanet, there are plenty of mekki who are excited and curious about the greater galaxy, and gladly set out to explore the wider world. Because the galaxy thus mostly sees these cheerful and curious mekki, it has led to them being seen as keen learners, who may not know everything, but who are open to learning about what they do not know.   Humans, especially, are keen of mekki and their cat-like appearances.
Scientific Name
Erectofelis sapiens
Lifespan
30 - 35 years ('wild'), 50 - 60 years (modern), - 70 years (galactic)
Conservation Status
Least Concern (LC): mekki are a liked and well-accepted people outside their homeplanet.
Average Height
1.3 - 1.85 meters (without ears)
Average Physique
Slim; muscles are powerful but slim and flexible.
Body Tint, Colouring and Marking
Mekki fur comes in a great variety of colors, patterns, and color variations; see below.
Geographic Distribution
Related Ethnicities

Mekki display a large variety in fur color, fur patterns, and color variations. Rather than detail these completely, please check the linked images for details. 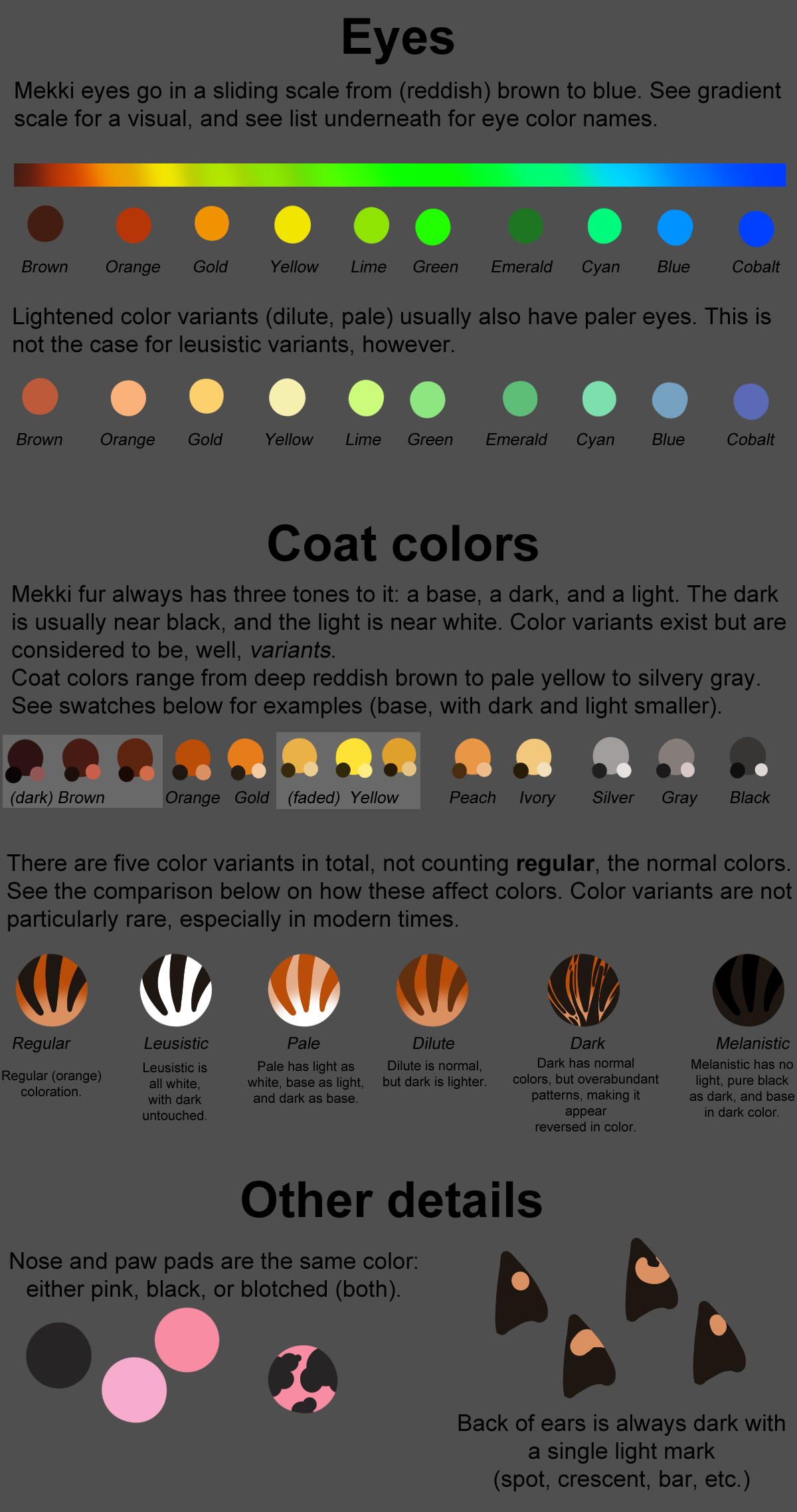 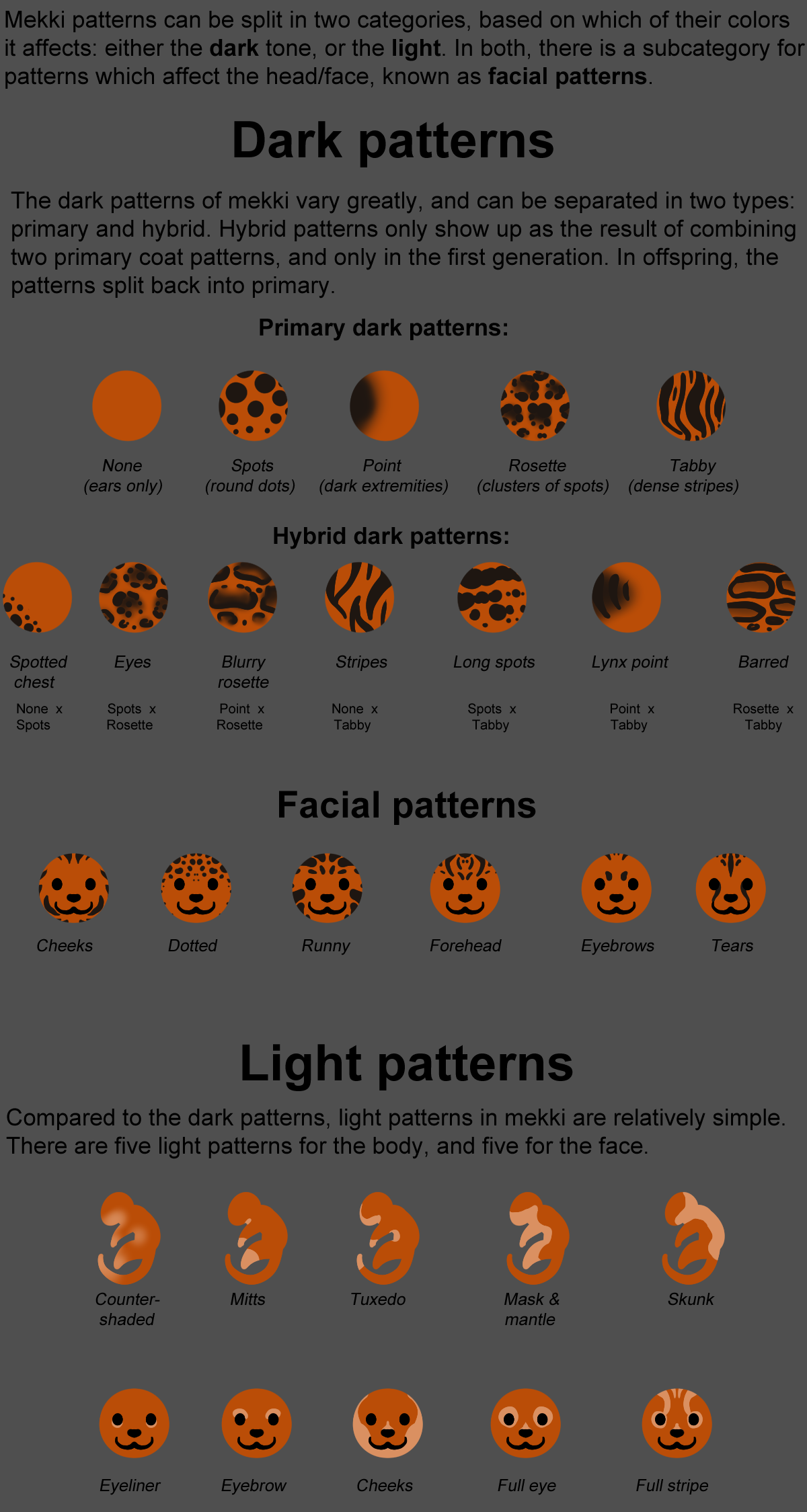 Awesome piece of work here I love all the detail you went into about Mekki. I really love that artwork you put into it adding the detail all the parts of the Mekki