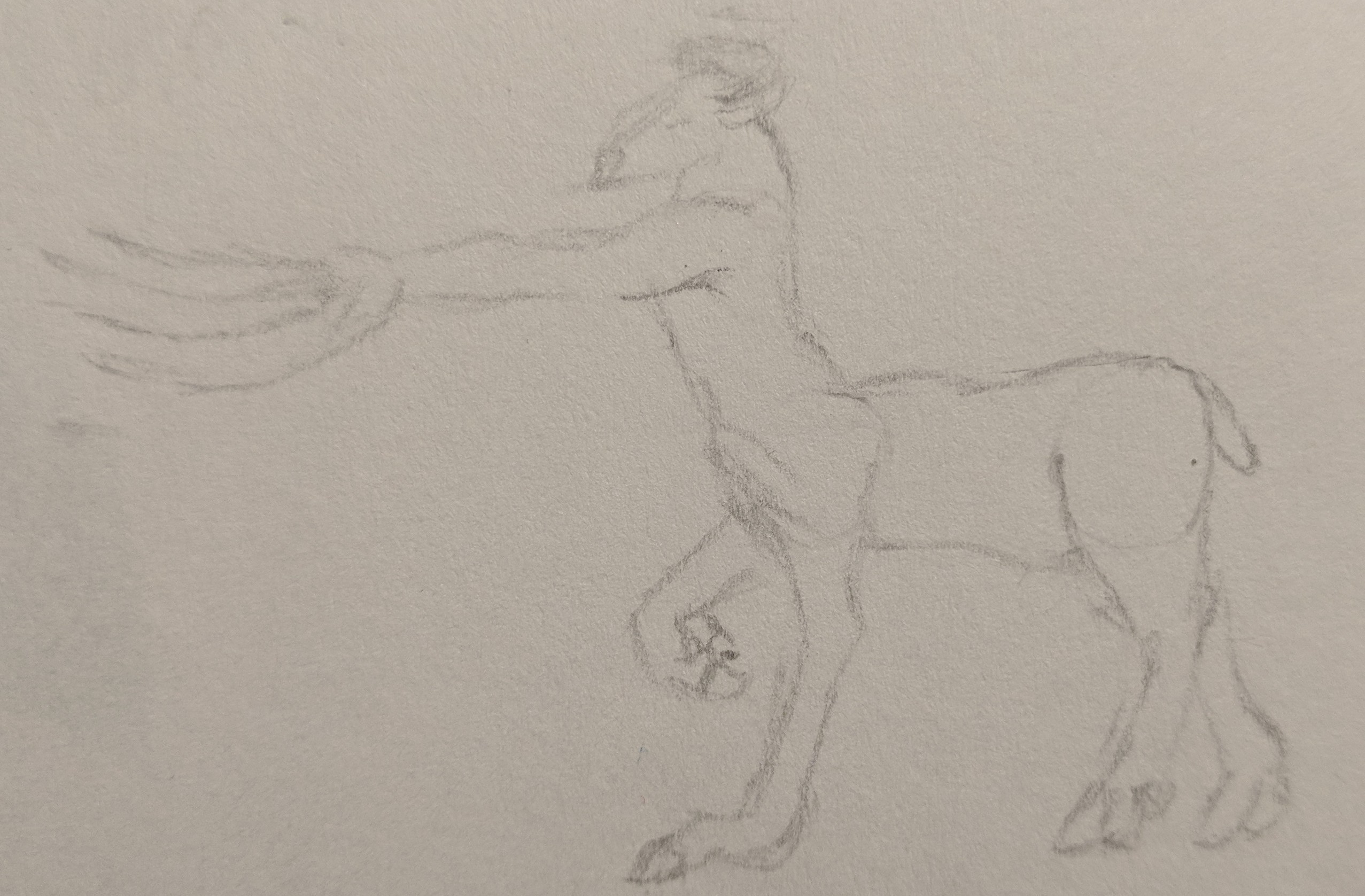 Roqbherg have six limbs, each pair unique. While not unheard of, many drake having as many limbs, the differences between the limbs is stark. Their hind-limbs are the strongest, able to propel them into the air several times their height. Their hindlimb feet have four stringed digits, three with large nails, similar to a Capra’s, and the fourth behind for support. Their mid-limbs have rudimentary fingers, the nails much smaller but still proportionally large. Finally, their fore-limbs are more as arms than legs. From their hand, their fore-limb digits extend nearly as long as the arms themselves, their nails being pointed and much smaller. Their able to dig the entire length of their fingers into soil and stone, giving them an amazing grip while climbing near vertical cliff sides. With all six of their limbs they are able to scale mountains faster than many who are capable of flight.

Their fur is capable of deflecting the high heat up high on mountains. It is short, to not insulate heat, shaggy, to cover more area, and reflective, do divert heat. Their fur is not so reflective that blinds onlookers, but enough that they shine. The reflective nature of their fur also makes them quite flame retardant. The color of their fur is not uniform, most having malted patterns of varying shades of brown.

Their fur does not Roqbherg tails are stubby, noticeable if they were still. They use their tails to convey emotion and surface level communications.


A Roqbherg’s horns grow to spiral around each other above their head. Some say they look as crowns, others say they are simple springs. Whatever the case, the bigger the horn and tighter the spiral, the tougher and more masculin the Roqbherg appears. Females have much thinner horns with longer, looser spirals.

Their heads are a mixture of a bovine and a goat in appearance. Their ears are long and pointed, swiveling constantly, flicking away any small critters bussing around. Their eyes, mostly shades of pale yellows (varying to light brown or faded orange), have horizontal pupils. As a counter to their poor eyesight, they have a heightened sense of spatial awareness to recognize their surroundings. 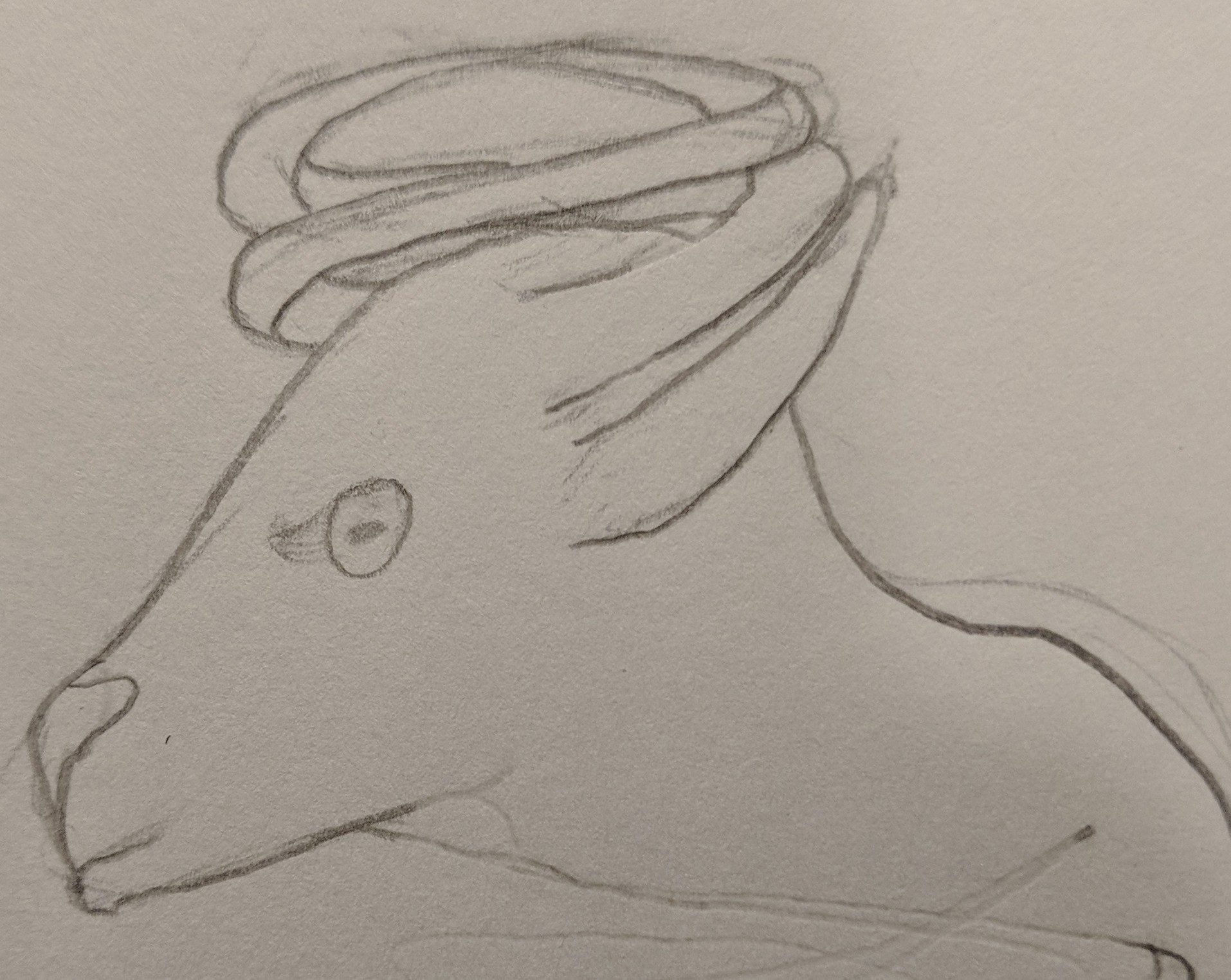 Roqbhergs are omnivores. Their diets consist of the lifeforms found within Drmiøzlk, a watery crystalline material that many tiny creatures create ecosystems within. They eat chunks of drmiøzlk whole, crushing it between wide, jagged molars, the peak in the center of each molar being the catalyst to shatter the drmiøzlk. They also gain nutrients from the crystal itself, it being the prime source for growing their shiny fur. A Roqbherg can survive eating other plants and animals; but they lose the heat resistant and flame retardant shininess to their fur, becoming dull.

Drmiøzlk only grow in high altitudes, the larger clusters growing closer to the mur ceiling (see Climate & Weather). They are highly abundant, Roqbherg being one of the few who eat them (or atleast shatter them to get what’s inside).

Roqbherg families, and thus societies, are heavily patriarchal. The head of their heard is the dominant male, or Unshioh (oo-n-sh-ee-oh). He leads with his chosen female and descendents. His wife, chief consulate, right hand, Silinge (see-leen-gyeh) guides and helps him in all facets of family or political governance. None would say how much sway she truly has, to remove any semblance of great power she has, but all females well know how influential they are.

Of the Unshioh’s descendents, his eldest son is second in command, the Sotenza (soh-ten-zah). If the son is not yet of age, or has not yet been birthed, the unshio’s brother takes this role. If there is no brother than a chosen cousin, and so on. The sotenza’s main role is to keep charge of three males, the Treshe (tre-sheh). The treshe are selected by the unshioh and each have their own major role. One treshe is in charge of guarding the heard (military and security). Another is to keep charge of rations and excess food supply and to give advice (economy). This role is usually filled by an elder, though not necessarily related to the ruling family. The final treshe is in charge of interpersonal relations (judiciary). This can be between fellow members of the heard, or when dealing with outsiders.

The herd live and graze in close proximity with one another. If the herd is out of sight and feeling distance, that is too far for most to handle. Young are kept close by their mothers, the mothers having to take special care not to trip over them. The young consider each male as their father, the Unshioh being their primary father. Likewise, each male takes care of all the young, whether they sired them or not.

Roqbherg live high up on mountains, the heat too great for many kinds of flora. Many creatures that high up live within the ground, a vast array of flora and fauna being just beneath the surface. Despite this, Roqbherg live on the surface, their dominance having no match.

To beat the heat, either for sleeping or for relaxing, they take cover under outcroppings or in entrances to caves. This is mostly done when sleeping, as the days are spent on the move. The area they move around, their range, usually consists of a single, large mountain; but can be several smaller mountains or a mountain range (depending on the size of the heard and their influence).

Bathing: To keep filth away, they find an dry, dusty area of their mountain and “purify” the dirt by setting a flame to burn for an hour. They then roll around in the ash/dust combination to cleanse themselves.

Many other species have taken the Roqbhergs family structure as a means of governance.
Humi first thought they were strange centaurs, mythological mixtures of them and an equine. This misconception was soon righted as they learned each others languages and behaviors.

Their major Reln is Kag.

Have tufts of hair around their ankles/wrists
Size
1.5-3 meters (while front torso is extended) from head to tail

Live closer to the ground and lower rolling mountains

Live at and around Mt. Kornal