A tough, stubborn creature with thick fur well adapted to the cool climate where it is popularly kept for its milk.   The domesticated kind is more docile than it's wild relatives.

The tagam (also affectionately known as the gam in some parts) is a quadroped, three toed hoofed beast which that is evolved to live in high, mountainous areas. It has a short, bushy tail and thick course fur. It has two short stubby ears and two horns in what would be it's forehead.

The female tagams are choosy about who they mate with but once they settle in a small herd they stay there. The males often fight with each other and the female tagams will observe and allow the winner to mate with them.   Some most gams are seasonal breeders, with a few species being the exception. Those can mate all year round.   Gestation takes about five months, and the mother gives birth to 1-2 babies. A young tagam is known as a kid until they reach sexual maturity.

The tagams are strictly herbivores and feed mainly on grasses and bushes, from which they get ten percent of their water content from.

They often live in groups of up to 20 animals in the wild, as the company helps them to better keep an eye out for predators.

Tagams are widely kept and bred for their meat, milk, and leather.

The tagams in all it's wild species and domesticated breeds are widespread in all of Kaestra. It is a common beast to keep. 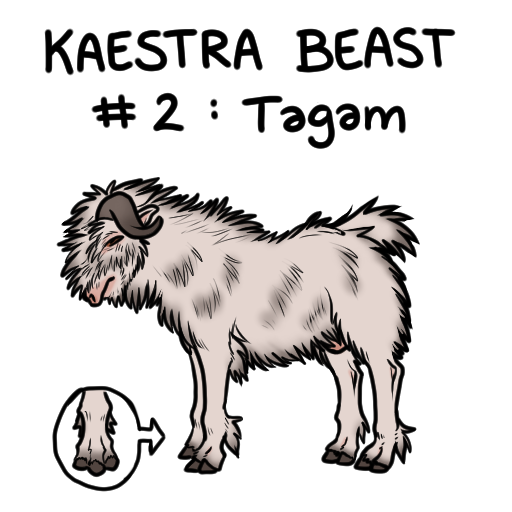 Answering: "Write about a species in your world that is bred or farmed for a high-value resource."
Visit Hejhyena's Competition Page Check all other answers to this prompt Competition Homepage