Halston is a large town on the River Brist south of Northampton which acts as a trade hub for the southern lands of the Duchy of Northampton. In addition to drawing farmers, craftsen, and traders from several nearby villages and hamlets; Halston is also the main point of trade between larger settlements such as Briarbrook and Glenshire. The large plaza in the center of town acts as an open air market on most days, but is also used for festivals throughout the year that draw crowds from many nearby settlements. 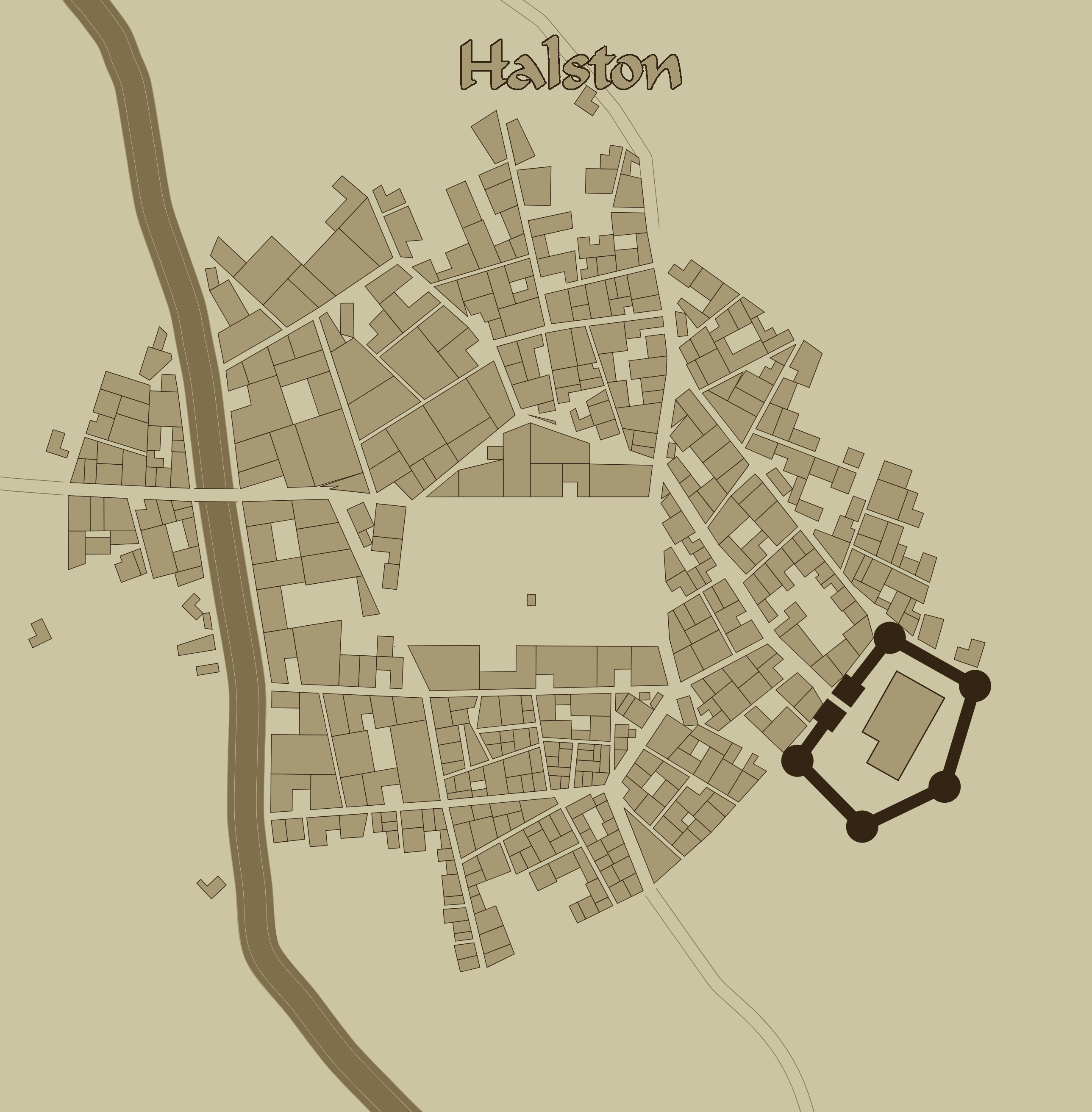 Like most other settlements in the region, Halston bears a mix of Rikenian blood and that of the old hill and mountain tribes. Because of the lucrative trade markets here, the town has had more influx from the southern lands over the years and is less homogeneous than other settlements nearby; having a majority population of pure-blooded Rikenians.

They say a man can shape his own future in Halston, if he has the coin.

The balance of wealth in Halston is skewed towards the middle-class. This is in sharp contrast to most other settlements in the area, where lower-income farmers make up the majority of the population. Traders, merchants, and an assortment of craftsmen make up the bulk of the population in Halston. There are also quite a few unlanded nobles who make their home here - all knights in service to the local baron - most of whom own some sort of business interest in the town. 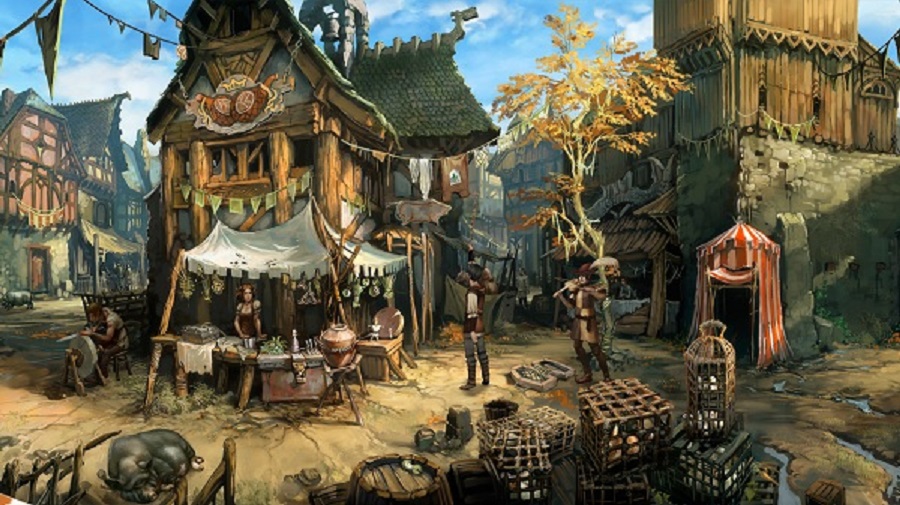 The streets of Halston have their share of the poor to offset this seeming prosperity, having a population of the homeless and destitute that would rival that of a larger city. Many of these homeless that are able to work will find ways to earn honest coin doing odd jobs for local warehouses or by helping to load or unload the wagons of trade caravans. Others might turn to crime, making the policing of the town of vital importance to the baron and the Merchant's Guild alike.

Halston is the seat of the Barony of Halston, and Baron Julian Chadwick has ultimate authority of ever aspect of life within the town and the barony itself. There are a number of constables and magistrates appointed by the baron to aid in the administration of affairs in the town, as well. An unusual phenomena in Halston is the power of the merchant class to influence the government, considering their coin pays a substantially high amount of tax per-capita compared to the rest of the duchy. As such, Halston has a Council of Citizens who are able to vote on certain policies for the town. Members of the Merchant's Guild makes up the majority of this council. While the baron has no legal requirement to carry out the wishes of the council, he usually finds it to be in his best interest to keep the men who control the flow of coin happy.


Baron Chadwick actually listens to the will of his people? Preposterous! Duke Faustus Leopold

Halston is not a walled settlement, although the Baron's home is a stone keep with a wood palisade surrounding it. There are normally no less than twelve knights residing within the town, and there is a professional constabulary consisting of almost one hundred armed men who regularly patrol the streets. Halston also has an organized militia of three hundred citizens who train regularly and have basic access to weapons and armor funded by the Barony. The town armory also has enough spears to equip several hundred levy troops, but should the need arise the baron could easily levy a thousand men from within the town. He also has at his disposal another ten knights and several hundred fighting men from the surrounding countryside.

The primary trade of Halston is the gathering and redistribution of goods. As a central hub of the southern reach of the Duchy of Northampton, Halston is where the people of this area go to find goods not available to them in their home village. Traders who ply the roads between the villages and hamlets of the area also gather here; and even if a farmer from a remote village cannot make the journey to Halston, his produce will find its way here in the wagons of a traveling merchant. This proclivity for trade in the open market creates a large influx of coin into Halston, and taxes are collected from merchants, farmers, and others who pass into town at guard posts along the main roads. 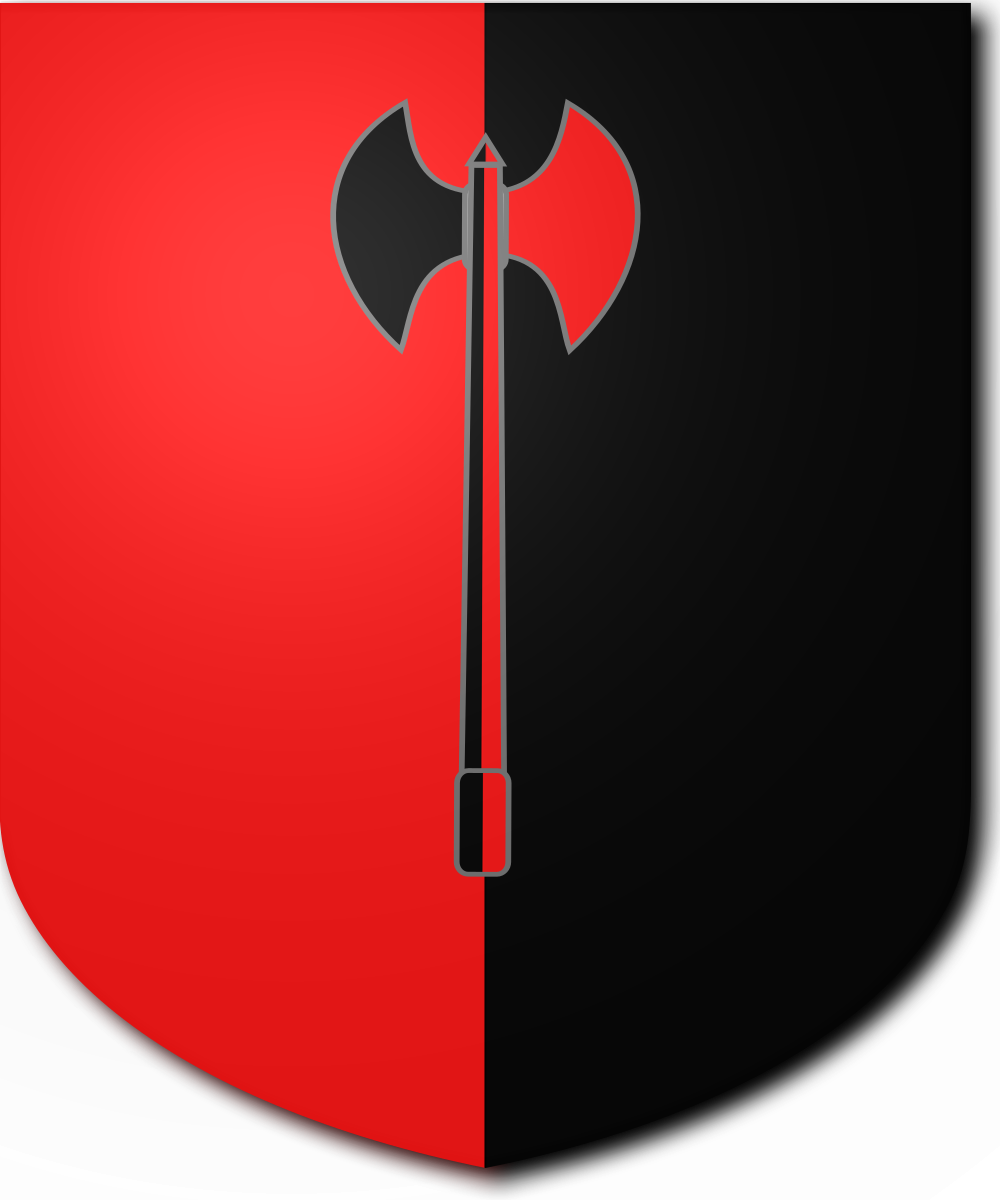 The Cats of Halston


Because of the regular trade of produce in the town of Halston, there is often refuse to be found in the streets. Rotting vegetables, scraps of meat, and other discarded foodstuffs litter the cobbles every day. Entire cabbages might even roll off a cart as it bounces through the town square. As a result, the town developed a rodent problem that would rival that of many large cities.   To counter the growing populations of mice and rats in the town, the residents have seen fit to acquire and breed a large number of domestic cats. Everywhere one goes in Halston, they are likely to see at least a dozen cats nearby. Every home and shop normally keeps several of the felines as both companions and deterrents to unwanted guests. Packs of the small hunters roam the streets as well. They say that for every man, woman, or child in Halston there are five cats! 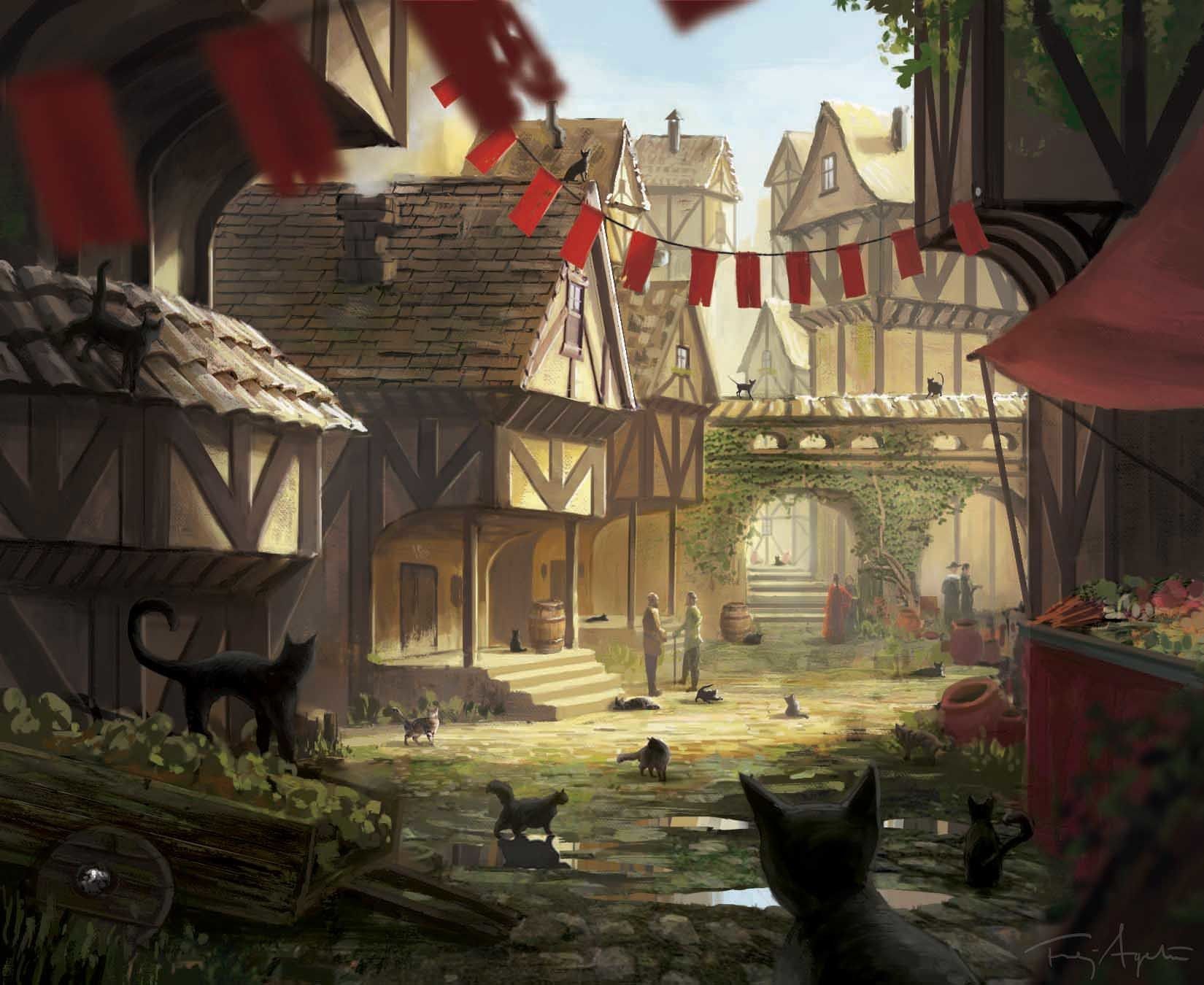 
As a major gathering place for the region, Halston is often home to seasonal festivals. For some smaller festivals, the large market square in the center of town is used to host the frivolities. Casks of drink are rolled out into the streets and banners are strung between the buildings. For larger festivals, the large open fields south of town at the base of the Baron's keep are covered in colorful tents, merchant's booths, and stages for traveling entertainers.   The most popular festival of the year is the Spring Gala, which gives thanks to Elaia for bringing life back to the land. As the first fruits of the spring are harvested, farmers from across the southern duchy gather to share with their neighbors. No coin changes hands during the Spring Gala, as the spirit of the gathering is to share the bounty of the new season with ones fellow man. This has the logistical effect of re-stocking the pantries of the citizens of the area with a variety of foodstuffs after the depletion of their winter stores.

In the eastern realms, there stands four kingdoms that dominate the lands from the Sea of Mist south to the river lands of the Rikenians.

Briarbrook is a small town which acts as a hub for a number of villages and farmsteads in the southern reach of the Duchy of Northampton.