Excavated from a ruined Holy Temple in [blank location], one of the first recorded temples in her name. It has been labelled as an item of extreme religious importance, and is the discussion of incredible debate. Some claim that this veil is from a High Priest or Priestess, yet other claim it is a veil worn by the goddess herself as she was moved to speak to her Devotees.

This Veil is considered a visor veil, due to it's short length. However, it does extend slightly past a model mannequin's chin, at 10 inches. It has four parts: The main veil, the secondary veil, headband, an amber brooch.

The Holy Veil is a mix of silk, and cotton. The symbols on the secondary veil are hand sewed beads, with golden thread.

Hand sewed; obviously made by a very skilled hand.

Religious; The archaeological team stumbled upon the temple and a select few items inside. This finding was incredibly important to historians as well as the religious community. When the team's finds were announced to the public, there was an immediate rush from religious figures attempting to keep the veil from being sold. They fought with collectors and hobbyists alike, to get the Veil into a history museum and aim for its preservation.   The religious community claim that this Veil belonged to the Goddess herself, as due to the age of the location and its excellent craftsmanship leans toward it being an extremely important item. Historians claim that it may be the first case of a Priestess, or perhaps the Goddess herself, wearing a veil.   After this discovery, it became common for Priest and Priestess to wear similar veils. 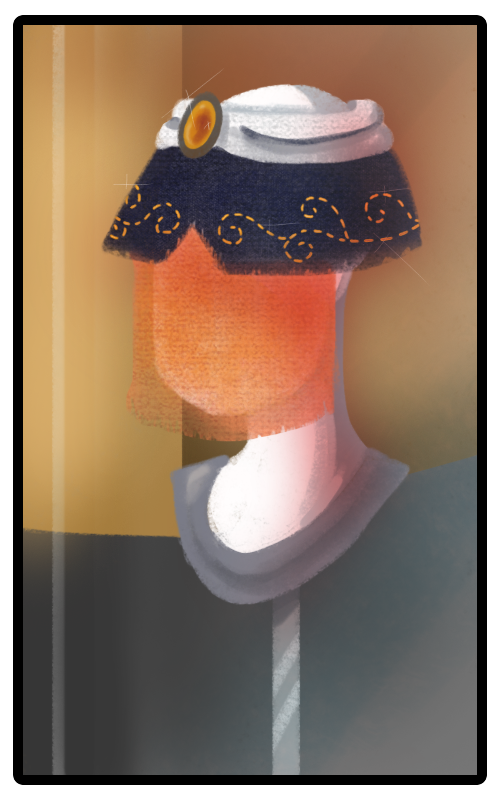 Item type
Clothing / Accessory
Rarity
One of a Kind; Others have been made to mimic it, but this is the only one of its age.
Dimensions
Length 10 in
Raw materials & Components
Fabrics Silk and cotton
Other Materials Golden beads and thread
Secondary Items Amber brooch

Related Groups The Church of Devishtari