Bulletin boards of listings catch the eye as rowdy patrons ask for another round and a bard sings ballads on the stage. The clinking of silverware against dishes rings out every once in a while as people eat, drink, and be merry as the fire burns and spreads warmth throughout the bustling inn. The innkeeper offers a drink, the delicious smell too much to resist. As one finally takes a seat, it is easy to realize that this is no ordinary tavern and the patrons are not ordinary people.   Weary travelers find inns everywhere, tucked in large cities, hidden by deep forests, covered with heavy snow, but few of these inns are those of the Dagger Guild, headquarters based in every large city of Isekai. The patrons are adventurers, all looking to line their pockets and solve a few problems while continuing on whatever journey led them here in the first place. For adventurers looking for a home or a job, there is no other place than the Dagger Guild.   Once there were many like the Dagger Guild, scattered across Isekai and serving the same purpose, but the Eldritch War erased much, leaving a single adventuring guild when the world finally came to from the horror. Someway, somehow, all that wish to adventure come to the guild, weapons at the ready, long roads ahead of them. The Dagger Guild serves the world as much as it broadens the horizons of its members.

The Dagger Guild is a large and scattered organization that functions through the use of Guild Leaders and individual adventuring parties. An inn or tavern in a large city will serve as the headquarters for the guild in that region, with a designated Guild Leader that is in charge of the headquarters and any members that are staying or living in that area. Guild Leaders will help townspeople and others post jobs on the message boards in the inns as well as assign jobs to adventuring parties that can handle the jobs. A great deal of paperwork is done by the Guild Leaders and is kept as a record of everything members do.

Very few keep as dedicated records as the Guild Leaders. Dragons, Elves, the Dwarves come to mind, but very few are as meticulous or as thorough in their recordkeeping as we are told to be.
— Kel, Guild Leader in Stronghold

Adventuring parties often varying in numbers, containing anywhere between three and fifteen members depending on the party. These parties are led by select members which are officially given the title of Pommel, a title that essentially names them as Party Leader. Adventuring parties much be officially formed and named with the proper documentation under the guidance of a Guild Leader to be considered legitimate. These parties are then allowed to take a variety of jobs and travel to any of the various Dagger Guild inns while being officially recognized as one of the guild's adventuring parties.

Each member of the Dagger Guild is required to pay a membership fee of 15 gold per month, but they receive many perks for their fee. 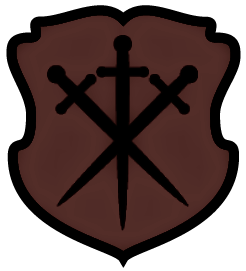 By the Sword We Serve

The Dagger Guild was founded as one of nearly a hundred adventuring guilds throughout the world at that time. Each of the guilds vied for members, attempting to slowly push other guilds out of the area through sheer numbers. Certain areas were occupied by a great number of guilds, each taking specific types of jobs or only working with certain races.   This system worked for years with the Dagger Guild slowly growing bigger over time. When the Eldritch War began, the smaller guilds were quickly wiped out as either their members were killed in battles or the guilds could not handle the jobs that came their way. As the war ended, the Dagger Guild and a handful of others remained, but quickly the others fell, leaving the Dagger Guild as the only remaining adventuring guild in Isekai.

This is wonderfully organized. I especially like the history bit as to how the Dagger Guild came out as the only adventuring guild. Additionally, the structure with the perks also helps to show the benefits of joining the adventuring guild. Great work!

Becoming a member of the Dagger Guild would be a great side quest in a campaign, especially with those perks. :D I love the emphasis on record keeping.