Misfit Zipperteeth is a Wishborn Plushcritter, with the sole exception of being an exsisting plush that was brought to life, rather than being created.   His design is basically a chibified version of a character named Mischief Zippertooth created by one of those designer-y artists, namely Emory Seven. It was renamed from Mischief Zippertooth to Misfit Zipperteeth as a joke in canon with the character that someone made bootleg merchandise of Mischeif. So... this makes Misfit an "official plush based on the in-canon bootleg plush of Mischeif". Few people got the joke, unfortunately.   In a publicity stunt, 1,000 of these "limited edition" Misfit plushies were made. Since the Wish that brought Misfit was a bit vauge on which of these 1,000 was to be made sentient... they all became so. Not only that but the Flux generated from the Miracle that did that also scattered the 1,000 across the entire Exstellarverse, even interdimentionally and transcending time itself. Our guess is the wish was phrased something like "I wish Misfit was real so he could hang out with everybody." or something like that. Unsanctioned wish, oddly specific phrasing... there you go. Surprisingly, one (that we know of) managed to stay on Elienias. This particular Misfit plush was #42 of 1,000, but really, all in all, it doesn't matter which one you talk to, they're literally all the same person, kind of like a hive mind.

So, what's up with this guy? 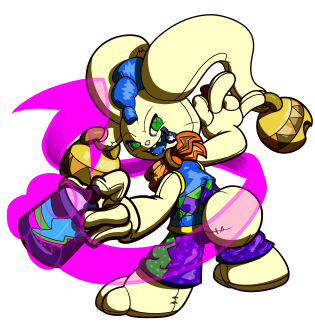 Misfit is pretty child-ish acting on the outside, but inwardly, he's observant and a bit cunning. Don't underestimate 'em because of his size. What he lacks in strength, he makes up for in crazy improv. He does like to make people laugh, though, and is generally friendly... at least to people that are friendly to him. He love to pull pranks and gags and such. If he's goofing with you, he's already your friend. Huge fan of "batsu games". (Look up "Gaki No Tsukai No Laughing" to get an idea. That kinda show!)   He can be pretty spiteful towards people that judge him on appearance or what have you. If you fall under one of The Three R's (The Rich, The Rude and The Ridiculous), you'll learn to hate him, as he will go out of his way not to attack you or anything, but to annoy you to the point of misery.   As for hobbies, he actually will try a lot of different "for fun" things. If it sounds fun, he's in. Videogames, board games, any kinda games. He also a bit of a thrillseeker, so he likes to do some rather daredevil stuff, albeit he'll fail often. It's pretty great to watch, though. You can laugh at 'em when he does! He'd want it that way. Plushies don't have bones to break, so hey. He's also got a morbid addiction to games of chance. He can and will gamble for as long as possible. There has been more than one occasion where he became rich on one game, as he's a rather luck guy... and then subsequently lost it all on the next game, as he's also a nut for that high you get betting it all.   ...Oh! And his "munchie", as all Plushcritters have, is cheese. He loves cheese.

Lemme guess, he can fight, too?

That's the idea. :P In a fight, he relies on a variety of tricks, a lot of which me makes himself. One favorite of his is his Smoke Bomb Type-MZ's and his Flint and Steel Rings he uses to light them (among other things). He also is really skilled at wielding his Yo-yo as a weapon. Despite being a Plushcritter, he doesn't seem to employ the same ability to use toys as weapons by imagination. Not that he lacks imagination, if his graffiti is anything to go by, he just doesn't seem to be able to... or just hadn't thought to.   If he's really pissed, he can also use needles he's laced in his hands and feet as claws or outright shoot them like little angry plushie bullets. It honestly takes a LOT to get him to that point. He's really easy going, albeit trouble.

Where are the other 999 Misfits?

Well, it's said that 986 are left alive. No one really knows what happened to the other 14, but one was speculated to be spawned in the Eris System's sun. Ouch. Poor number #719... As for the living ones, well, if you see one where it "shouldn't be", that's why.   We do know a little about some of them, though!

#1 - Currently on Earth. Became non-sentient on arrival, but is still considered alive. #42 - Considered by the other Misfits as the "OG". Lives on Elienias in the Tetra City area. Has a connection with the rest of the 999.
#112 - Taken up streetbusking with a group of kids to make some space cash. Runs a "milk bar" out of spite of the fact that they won't let him in the regular taverns. Somewhere in France during the 1800's.
#246 - Somewhere in the D&D Universe. Rouge Scout.
#666 - Real identity of Doom Guy. You know, the one. Really likes chainsaws and energy weapons. Hates demons. Has a pet rabbit.

#777 - Litterally a jester in the Kingdom of God. Trying to come up with a joke The Creator hasn't heard, yet. Has excellent dental.

Same as Standart Equipment, but including... SuperLoot Sack
Too many Flash Grenades and Stun Grenades
EMP Gun for camreas and eletronics and such.
And probably a variety of other things, depending on who he's planning on going at.

Misfit wants to collect enough Star Shards to make a wish that will solidify him and the rest of his Plushcritter bothers and sisters as beings with souls. His fear is that if someone collects up all the shards first to "fix" the wish that brought them to life, he and the rest of the Plushcritters will cease to be.

Oh man, does he ever love cheese.
Anyone that fits under the Three R's might wanna stay clear.

Misfit has a slight case of kleptomania, especially for any trinkets and shinnies and useless things like that. He also really likes to commit vandalism to property that's owned by rich people, because he's got a destructive streak and he figures if it's gonna happen, it might as well be on someone who can afford it. 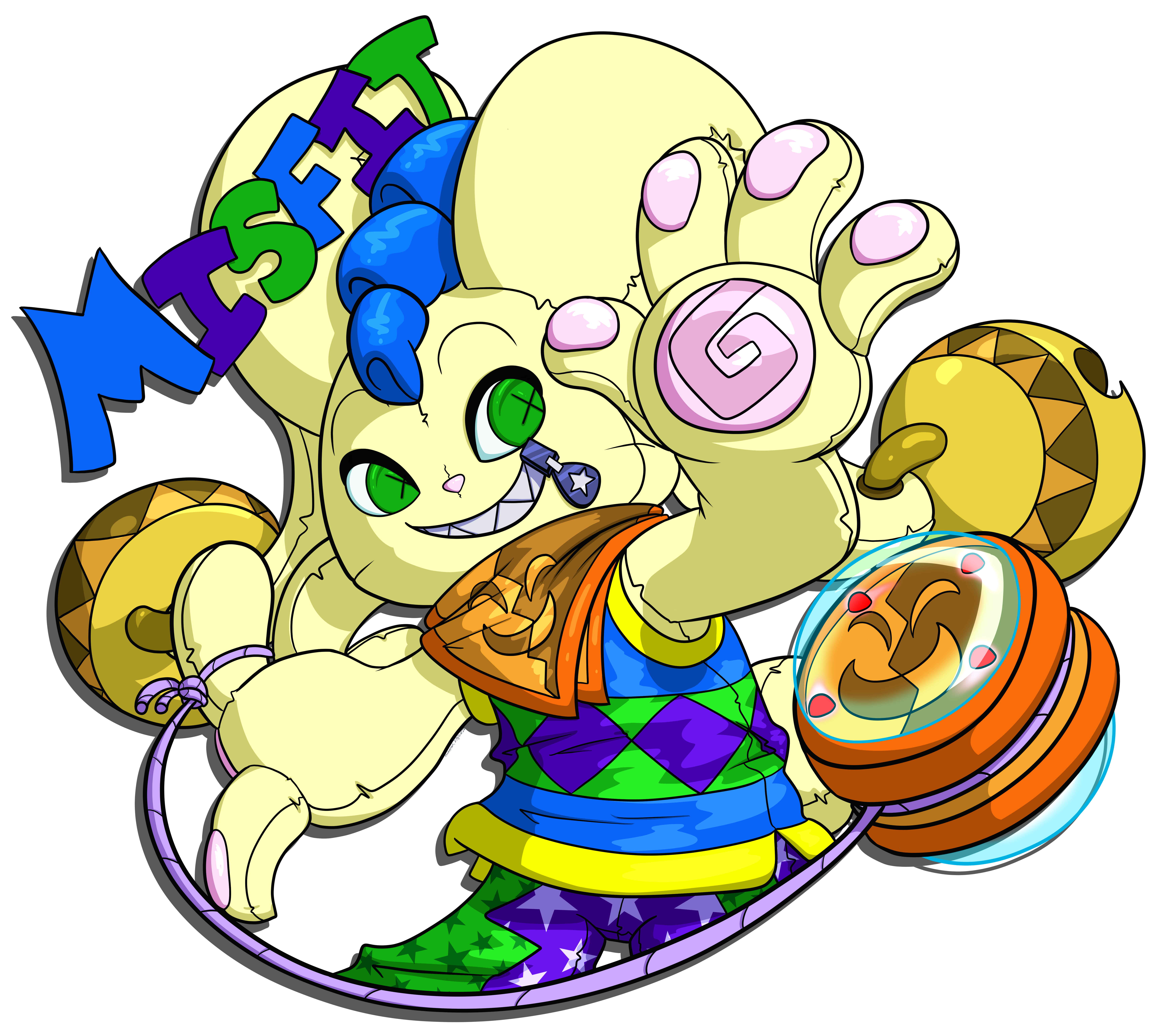