Created in 4978 EA, the Etrean Standard Calendar is the brainchild of a group of academics from one of the major universities in Kaien. It was originally created to facilitate diplomatic arrangements, but quickly grew popular in mercantile enterprises and from there spread across the world.   The calendar is comprised of thirteen months of twenty-eight days each, and is predominantly based on the movements and phases of the moon.

Before the existance of the Standard Calendar, time was measured in a variety of ways by different cultures and peoples. It was measured by the changing of the moon, or the movement of stars in the night sky. It was measured by the passing of the seasons, or the migration patterns of animals. There was no cohesion from one country to the next, and this proved time and again to make international relations difficult.   The Etrean Standard Calendar is the brainchild of Simon Cross, a Kaienese academic from the prestigious Marble Downs University. Alongside his colleage, David Milton, Cross assembled a group of academics from across the world to create a calendar that could be used and recognised internationally. It took the group of ten almost a year to create a system that all of them agreed on.   The finished calendar was officially debuted in 4879 EA during the planning stages of diplomatic talks between the leaders of mainland Caia. These talks prevented a war between Zenra and Akerra, and some scholars believe that the Etrean Standard Calendar was instrumental to their success.   In the years that followed, the Standard Calendar spread slowly across the world. Its adoption by merchants trading by sea meant that it was able to travel vast distances, beyond what Cross and Milton ever believed was possible. Whilst some cultures remain resitant to the Standard Calendar, it has become almost mandatory for both trade and diplomatic relations. 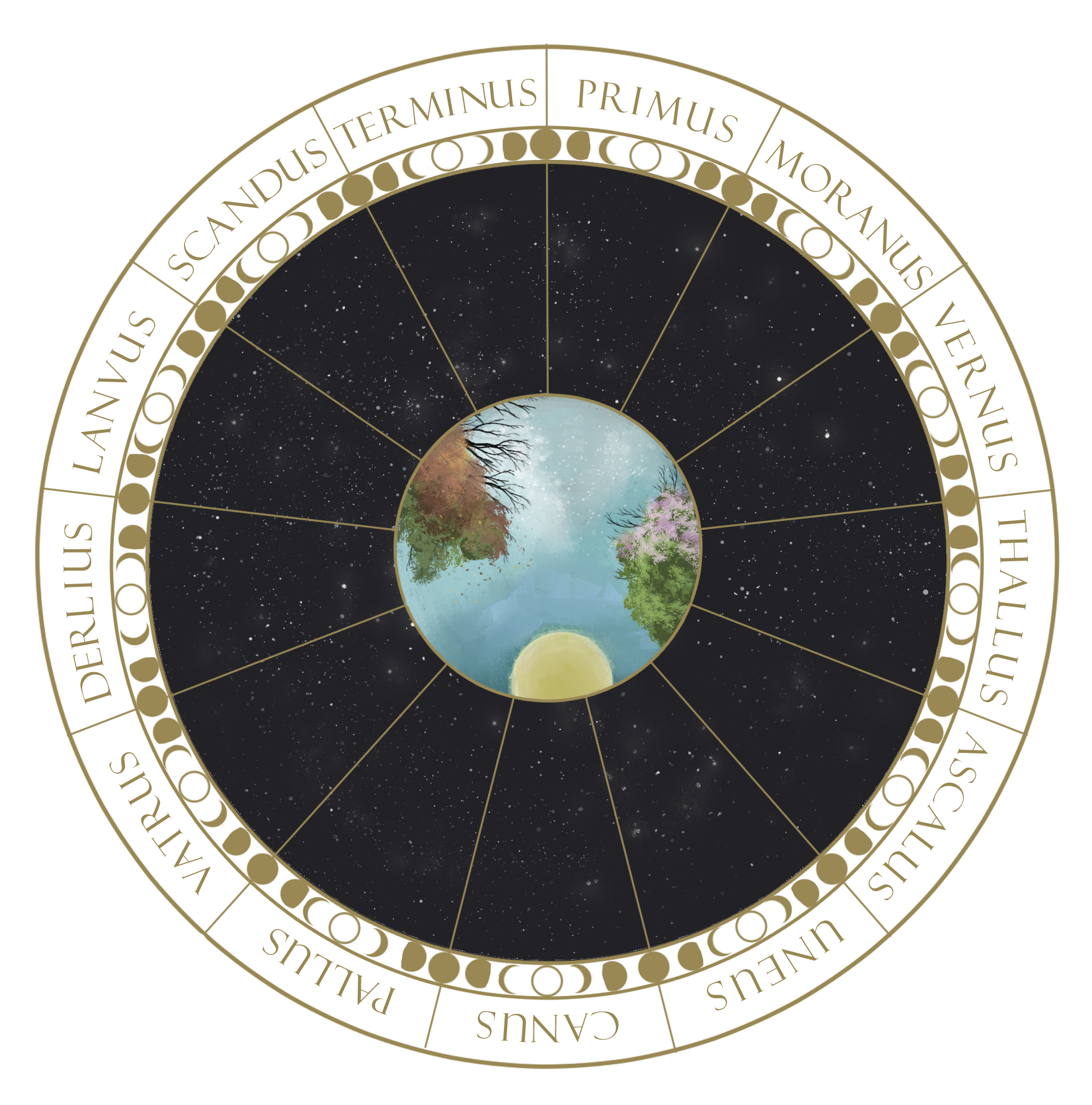 They say this calendar is meant to unify us, to bring the world closer together. But how can that be the case when it rides roughshod over the traditions and norms of the south?
— A Dissenter

In the years following the introduction of the Etrean Standard Calendar, several criticisms emerged, especially from countries that had not been involved in its creation.   The largest and most often cited criticism is that the naming of the months reflect the seasons of the northern hemisphere, and completely ignore the differences present in the southern hemisphere. For example, the month of Derlius, based on the Lurian word for 'harvest', reflects the harvest season for the north. In the south, this same month heralds the beginning of the planting season. Proponents of the Etrean Standard Calendar argue that the names of the months are just that - names. Their purpose is to differentiate the months from each other, not to define them.   The other criticism levelled against the calendar is that it displaces traditional methods of timekeeping, and that it is a step on the slippery slope towards a homogenised, monotonous world. Whilst the loss of traditions is a genuine concern to many people, this argument is generally seen as fearmongering towards the idea of globalisation, something that scholars believe would not be viable for many years to come.   In 5291 EA, a politician from Dryst created a southern-centric version of the Etrean Standard Calendar. This calendar used month names that reflected the southern hemisphere's experience of the seasons. However, by this point in time the Etrean Standard Calendar was in common use across the world, and his work never caught on.

Taken from the Eshuan word for 'first' or 'beginning', Primus is generally considered the first month of the year.

Moranus comes from an amalgamation of the Kaienese and Seruic words for 'forest' and 'hidden'.

Vernus is derived from the Bazuurine word for 'renewal' or 'rebirth', as well as the Eriasian word for 'frost'.

Thallus is derived from the most common name of the one true Coranish god, Thallase.

Ascalus is formed from a combination of the Kaienese and Seruic words for 'blooming' and 'warmth'.

Uneus comes from the Bazuurine word for 'heat' and 'sun'. Its pronunciation is often a point of contention.

Canus is named after the Caillan king, Cane II, who was in power when the calendar was being conceived.

Pallus is derived from both the Kaienese and Seruic words for 'peace', which echoes one of Cross's hopes for the calendar.

Vatrus come from the Zenran word for 'fire', 'heat', and 'the colour of the sun on the water'.

Derlius is derived from the Lurian word for 'harvest'. It is the month that most often draws the criticism from detractors.

Lanvus is taken from the Akerran word for 'change'. It refers to how the leaves change colour as the weather grows colder.

Scandus is derived from the Akerran words for 'slow' and 'calm', reflecting the winding down of the year.

Taken from the Eshuan word for 'ending', Terminus was chosen as a mirror to Primus. It is generally considered to be the last month of the year.
The Basics

Whilst probably not the most interesting article, it was an important one for me to write to be able to get all my dates straight. The controversy angle came quite late in the writing process, but I think it's my favourite part.

What a nice and informative article! I love the controversy section the most. It's interesting. :D

Thank you! :D I had fun with that bit!

Awwwwww! Thank you for the homage Emy <3 The names were difficult to come by but they have a very good ring to them :)

I know you have been putting a lot of effort into this calendar. Let me tell you, it was worth it. This looks awesome!

Thank you! :D It's going to make everything going forward much easier to keep track of! :D

Very cool calendar. Love the description of how it came to be and how it was both needed by the world development and at the same time spread by it! Well done :)

Oh wow, I was just thinking about making my own calendar and here you are with your own! How you dont mind if I take a little inspiration from your amazing work ^^   I love that you delved into the origin of the names of each month, I think Terminus might be my favourite! The criticism is also a really nice touch, conflict really always does make articles feel more alive

Creating a calendar is no easy feat. I think you have done an amazing job though. I love the information about how the calendar was created and why. But the criticism and controversy section makes it feel real because it makes sense that not everyone would accept a universal calendar.

Effective article to explain how people measure time. I like the controversy about how this impact on tradition, feels very real.

And seen on the screen of the computer it was a very nice visual impact, that from the mobile I totally missed!

I dont know much about how calendars form but I love how this one was initially diplomatic in nature, and later adopted by merchants. That just makes alot of sense to me. The way it becomes the dominant calendar is quite interesting and I think it's a great touch to include information on those who aren't too thrilled by it. I think that's my favorite part. Lol well done!

There's a lot of convincing detail in this one, I really like this concept, particularly as others have already mentioned, the diplomacy and the controversy. So many interesting words used in this calendar from so many cultures... Your calendar reflects the vastness of your work :)

I really love the controversy angle as well! A really cool way to look at the creation of such a world-spanning system.

This article was interesting! I like the names of the months and their meanings :)

"Whilst probably not the most interesting" God I loove this sort of background culture shenanigans. I think the controversy is such a fascinating addition again and is incredibly believable! Though I have to say my favourite part was the explanations of the month names

Thank you! I had some fun with the month names and the controversy! :D