A hobgoblin and former leader of the goblin resistance in Hedgpeth in the 890's. He was suspicious of the Characters because he thought they were interfering with his plans for goblinkin home rule by assassinating elven guards, but he allowed them to operate in the city after a group of adventurers discovered that a chuul named Helix was killing the guards in town. He led his forces in the Battle of Hedgpeth in 896 that led to the defeat of the Elflands’ forces in the city and the liberation of the local goblinkin. He allied with Brogg the Accuser after the New Year's Massacre of 897 to defend Hedgpeth from the Sunken God's sahuagin forces, but when the city fell in that spring he sacrificed his life to allow Brogg and others to escape the sahuagin horde. 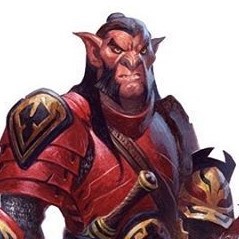