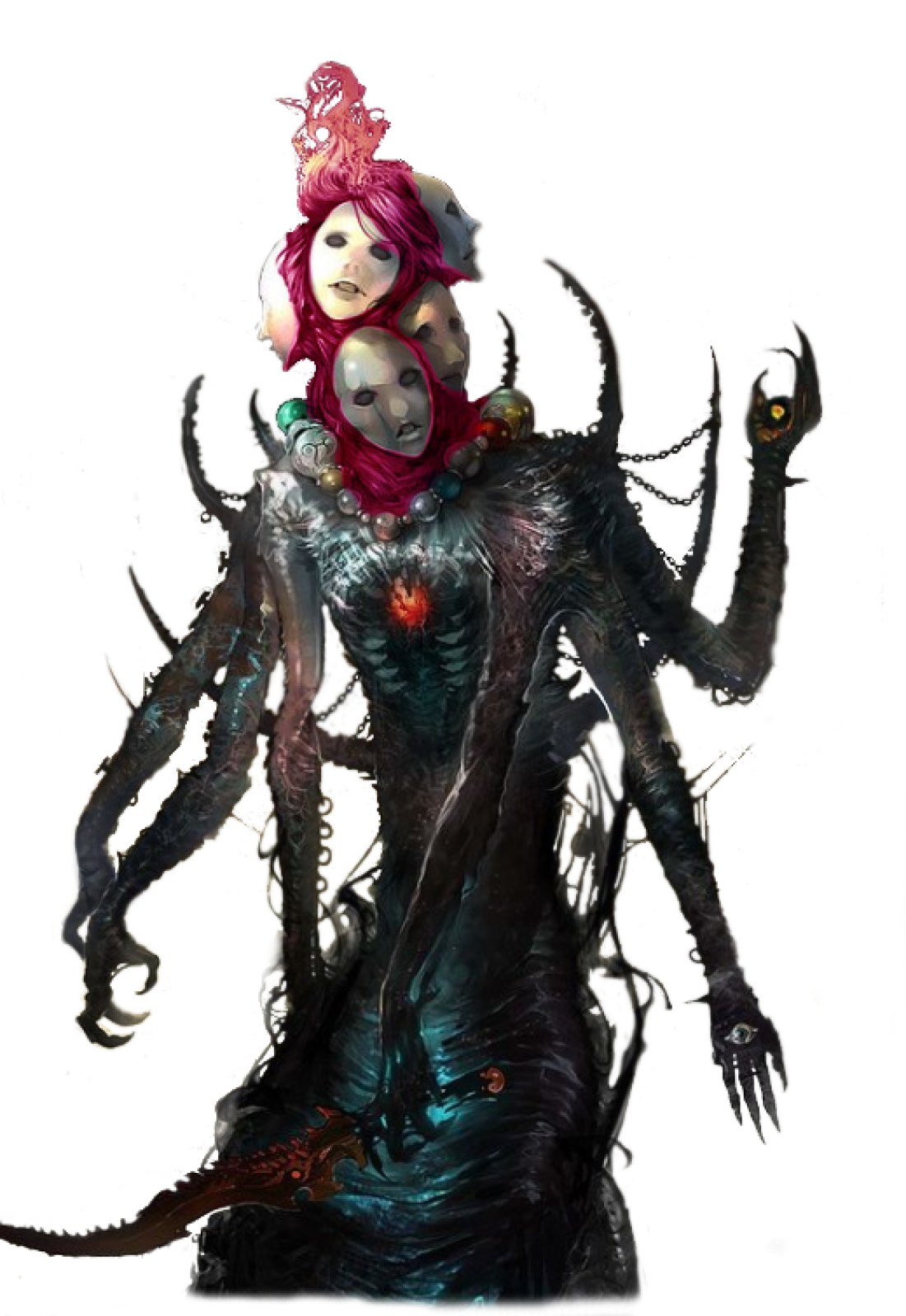 Peer into the darkness,now.... your nose is dirty.

Mazekin born by name of Nathaniel in a family of noble researchers, in a city of Meruem. A curious child to be ascended into a godhood in his late 40's in a course of following his parents steps.   The price of curiosity and reward for stubbornness incarnated.

Porcelain mask with a jesters hat

His religion has no rules, or tenets, he considers you his friend or something alike and might aswell knock on your door to have a tea party.

Has none.(Very upset about it)

Restoring the Church of the Masked Labyrinth

At his life he was a thin fit fellow, dark long hair, frail legs and lanky arms,which carried over into his avatar form, after the Merge in a ritual of Kindling. But due to the frailty of his own body, the ritual distorted his form adding new limbs and faces to his appearance, and the darkness curse was not suppressed as a result of this transformation, but only entrapped his own heart in chains in a middle of the chest of this new form exposed and almost outside of the rib cage beating and glowing like a bright beacon, reminding him of his previous self as a mortal.

Blackened ichor-like shadowy material as skin and a hollow empty bones, infused with arcane energy almost dripping down as he moves, and evaporating into the air as a thick black mist. Hunched looming over figure with six hands with sharp claws on the fingertips dripping with smoky ichor.

Wears a porcelain mask(s) over his head covering all the features of a distorted face.

Has a vast amount of metallic rings piercing his body in various places, mainly on hands.

When in avatar form, he always is dressed up as a royal jester and caries himself as one, as jolly clown "Harlequin" of sorts. when in god form it is a quivering form, hunched over and heavily breathing as if was carrying enormous weight on his shoulders

Specialists in illusions and trickery, though does not use them pragmatically, but only as a joke and or shenanigan, being rather childish.But no one has seen his true potential

Jesters garbs of various kinds, in combination with a theatrical mask and jesters boots with small chimes on the noses of them.

He is specialized in archaeology history and ancient knowledge that were found by him in life and after ascension.He took domain of Trickery, Secrets, Change and Mazes

Mazekin born by name of Nathaniel in a family of noble researchers, in a city of Meruem. A curious child to be ascended into a godhood in his late 40's in a course of following his parents steps.   Grown surrounded by knowledge and mysterious artifacts that were gathered by his parents, he developed interest and taste for mysteries, hidden from the curious minds of the people.As he has grown to adulthood reading and following his parents across the continent looking for mysteries and valuable pieces of ancestral heritage of the world. He was always enthralled by the deep caves,crypts, and endless catacombs.

Was educated by private tutors arranged for him, as a noble does,on subjects of behaviorism, philosophy, fencing, calligraphy,architecture and history.

He was self employed as reached maturity, he followed the steps of his parents and continued to look for artifacts of the past, which led to his fate.

In his early 20's he stumbled upon a secluded Minotaur crypt, that was unnatural and strange for they usually eat the fallen comrades, the full circle of life finished.Turned out to be a ceremonial tomb for the greatest of the kind situated below ground in Carver city region.Later on turned into a First temple of "The One". Since then the public achievements of this person were engulfed in shadows and his further public life was impossible to track.

In his 30's he got into a shadowfell, in his research and got into a precarious dealings with Darkness.Afterwards was cursed with Hollowness.Which made him to go crazy, and obsessed by getting in dangerous tombs and places of risk to to avoid "Fading".Which pushed him over his limits and led him to the discovery of ancient manuscripts, which turned out to be his doom and a passage to ascension

After being cursed by darkness he developed an unhealthy need in sweets,candy and decadent pleasures. Fairing around the world and having a bite of each of the available treats.

Initial morality was of a cliche noble born in intellectual family and risen by the high standards of etiquette and chivalry.Later on after Kindling ritual, after merging with the entities, the personality was split and divided into 6 different aspects,following own path and philosophy.

A his mother and father has raised him he does not like give people a solution or feeling of the chase.Also he cant stand breaking a promise.

Wish to be restored to power after his religion was wiped out by Order of the Dawn, a knightly organisation from Graylands.And wishes to rebuild his temple currently rebuilding in Jial by a group of Minotaurs.

A very good liar, and also omnipotently insightful when it comes to people.

Extremely addictive. Has a need to get into danger and walk on edge.

Spins his head 360 when outraging.

Does not care for hygiene.

Has no relations with his old family tries to keep tight with his worshipers and has a chain of acquaintances across the multiverse.

Was not religious before became a deity.

Has a favorite stray ugly cat in one of the small villages in Southhold.

He speaks quickly, does not get baffled or stopped by any argument. Speech contains a lot of "Water"

Has an immense hoard of treasures hidden in various places.Still owns his parents mansion and land that is granted to his family. 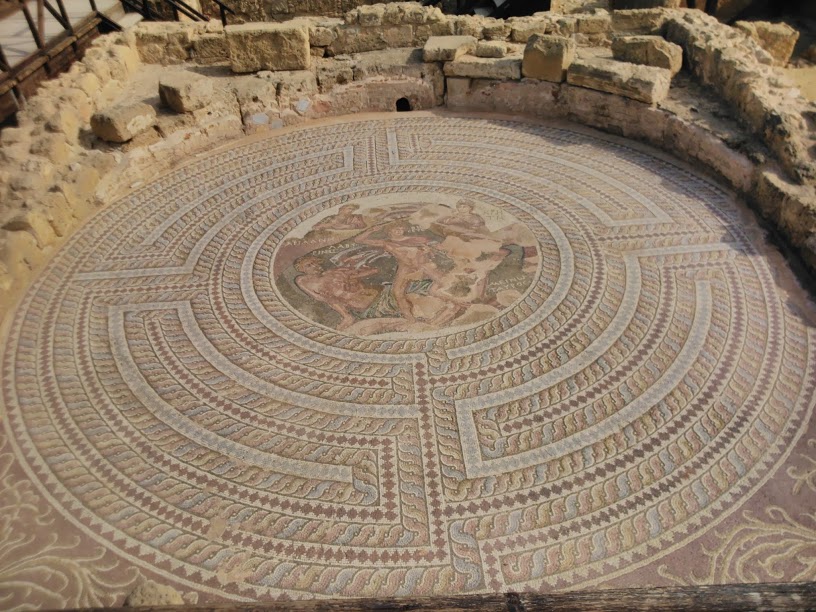 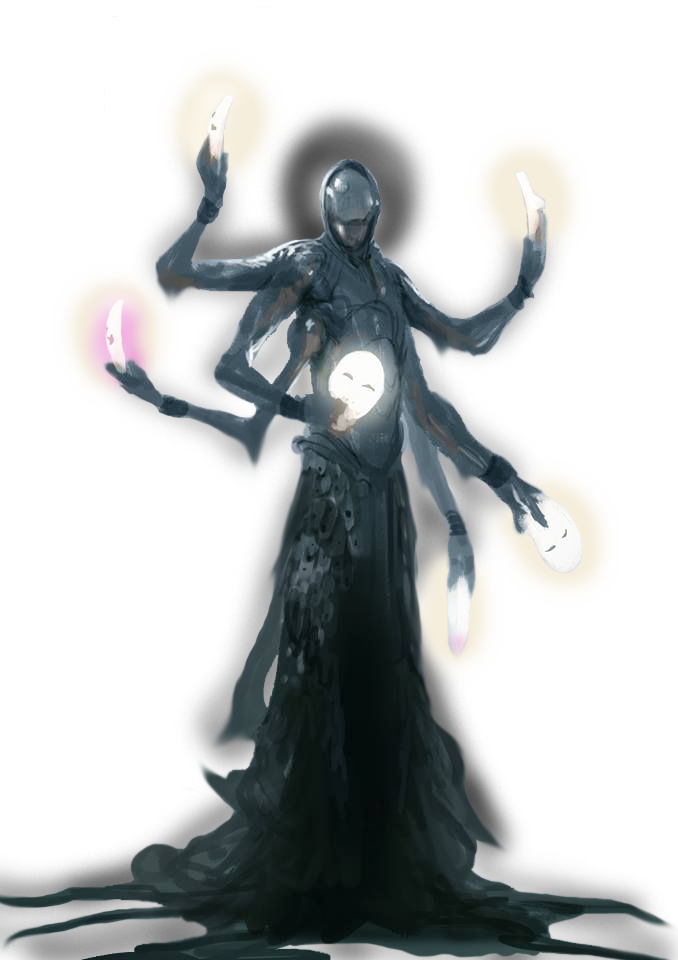 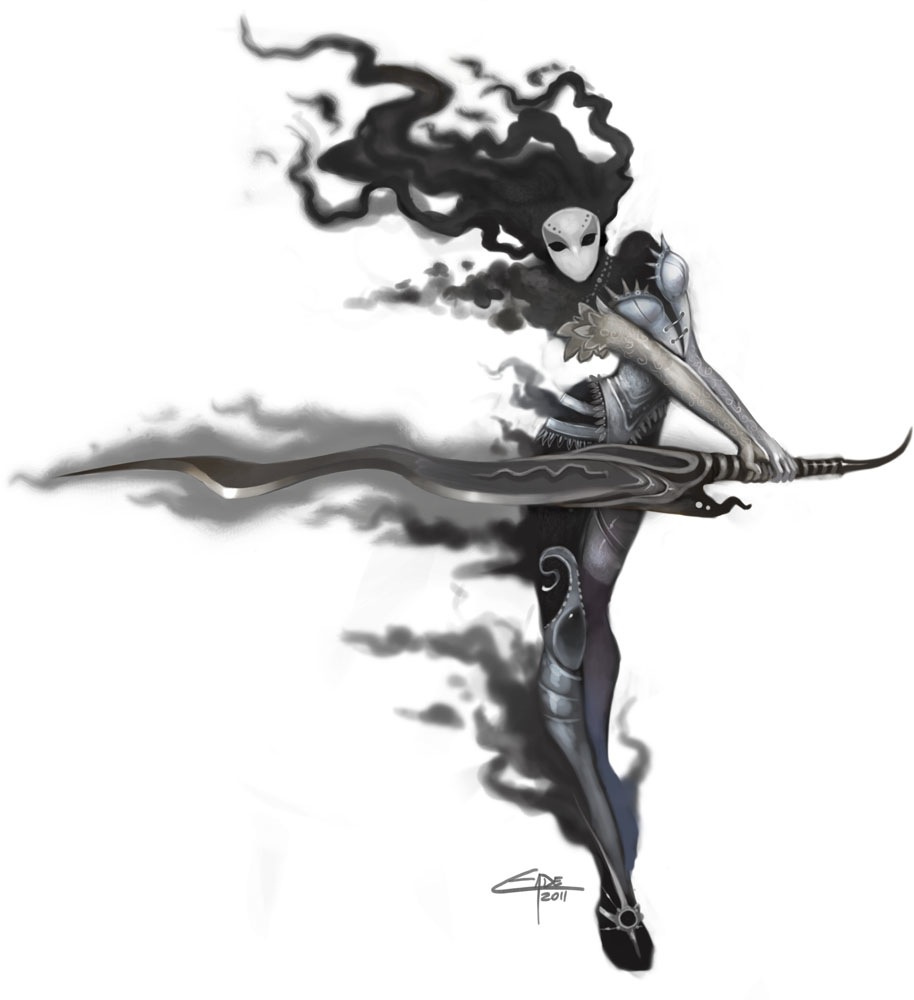 The never ending changing nature of this Deity will not let you to be bored as its worshiper.
Darkness(Fading)
Deities
Urth