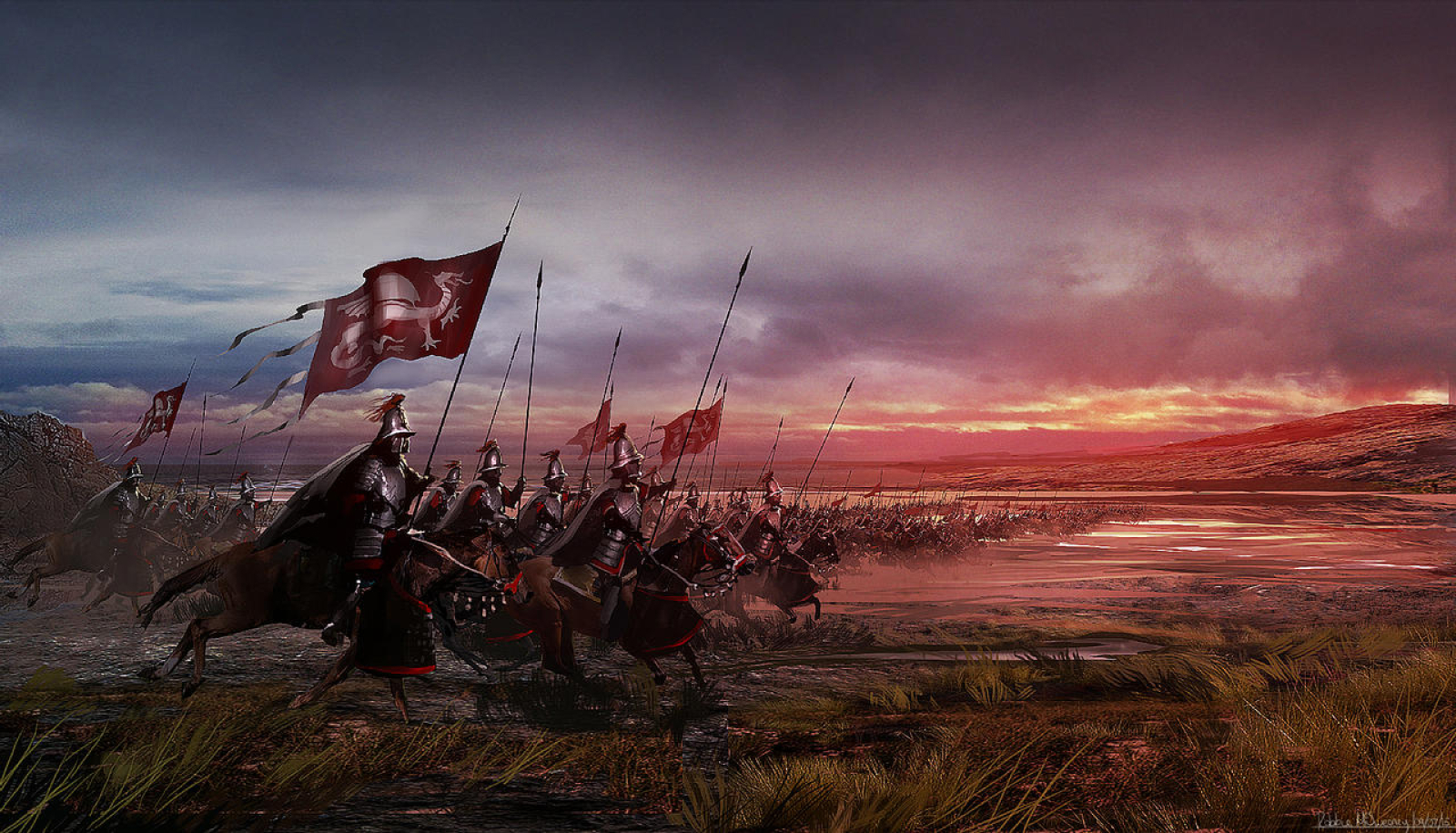 Information sourced from various research tomes, including "A Concise History of the Great Purge", "To Raise the Dragon Banner", "The Great Renaissance" and "The Great Hunt, a History: vols.1 - 5"

It was a dawn of Courga's Mourning as a red sky peaked over the Aston hills, silhouetting the redfallian "locals" that had cultivated too much self-worth for their own good. Spitting on the image of our great Holy King was too far, after months of seeding unrest in our great southlands.   And then contrasting against the grim grey sky, the Dragon Banner was unfurled. The image of the Frigid Doom lit up and came to life over the fabric. It was hungry for rebel blood just as us, it was bound to our very souls as we benefitted from the power of the Dragon.   These faithless apostates would curse the day they antagonised the great Rivercrown. If they would survive at all.
— Excerpt from 'To Raise the Dragon Banner'. The cover image depicts the very same Third Battle of Aston discussed in the book.

The passing between the Second Era and Third is believed to have been marked by a legendary event known as the Invasion of Mortis Realm, where the Dragons united with the Celestial Gods to descend into the underworld in an attempt to defeat the Great Hag Throff and her growing number of Fiends transformed from Souls. When both Mercphobia and Vair were captured and slain in Mortis Realm by Giants who had stayed loyal to Throff, a mass retreat took place back to the Mortal Realm. The remaining dragons convened on the Mortal Realm and came to two different ideological outcomes, with half following Igneel in seeking revenge against the Giant-kin. Thus, a Great Hunt was declared to scour the Mortal Realm to wipe out any and all traces of their cousin race.

While the Great Hunt's forces were filled with warmongering veterans dragged away from Mortis Realm, they could not realistically meet their aims alone despite their power. According to cultural legend, kings and queens from all across the Realm travelled to the court of Igneel offering gifts and fealty to prevent their wrath from being directed upon their lands. During this time, the dragons individually favoured some of these lords and chose from their number a champion each.

These champions were granted a Dragon Banner each, with Finlay Fooarsbane being the first champion and offered the Banner of Igneel himself. These champions would actively partake in the Great Hunt without stealing bloodshed from the Draconic Crusaders, using the Dragon Banners as a symbol of domination over others.

The end of the Great Hunt appears to have followed directly into the Renaissance of the Dragon Age, where the Empire of Midland reached its height in peace, prosperity and influence during the early mid-Third Era. As the Empire expanded, the Emperors started conquering lands that had passed down the Dragon Banners into the late Third Era. To depict the unifying power of the Empire, these Banners were stitched together into a Grand Imperial Banner, which was flown during the coronations of the emperor, as well as whenever the emperor themselves appeared on the battlefield. This Banner managed to form all magical abilities of the individual Banners into one, with each Legion benefitting from its effects when their Emperor joined them.

However, the Midlandian Empire only managed to collect three out of the five Banners. The Green Dragon Banner granted to the Fisher King of Arannas had been lost during the Invasion Cycle, and legend tells of the green fabric drifting out into the Silverlight Sea only to be found again at the end of a hook by the next true Fisher King that will lead Arannas back to glory. The Kingdom of Analand always remained outwith the grasp of the Empire, always keeping the Imperial Legions close to the Jewels mountain range that split the two. For morale, the Analanders flew the Silver Dragon Banner whenever they sallied out to war during the Third Era, with all depictions of ancient kings having the banner present somewhere in the artwork from the creation of the Coronet of Jabaji to the arrival of whisky from the Fairweather Heist.

In time, the Empire fell and splintered leading to a dark age of the Warlord Period named not so after the invaders and rebels carving up the imperial territories, but after the loyalists who became warlords using the remaining legionnaires to enforce the von Apollyon will. The most powerful warlords could not agree on the true successor to the von Apollyon's and in going their separate ways split back up the Imperial Banner and would be incorporated into each of their cultures that survived to the Fourth Era.

The Imperial Palace at Doldrey was populated by the von Prometheus successors and kept the Bronze Dragon Banner as a symbol of their legitimacy. As the warlord states evolved, the Promethean Empire over time became the Kingdom of Buerach. As peace settled back over the Mortal Realm during the Fourth Era, a second pro-Midlandian sentiment has risen in Buerach culture, with the Bronze Banner being used as a symbol of Buerach to unify Midland and hold dominion over the Heldenmarch. Since the Archbishop of Doldrey took control over Buerach, this underlying cultural supremacy has been exploited for anti-Helden sentiment.

The Red Dragon Banner was taken back by the Imperial Governor of Wallatoria, hoping to use the banner in combat against the extreme unrest occurring in their lands. Frost Giant raiders still remained in isolated pockets of the Wallatorian Lowlands, the Highlands had reformed the independent barbarian state of the Hinterlandic Kingdom, and the great city of Yorgrim had become Ignia; the conquered lands of Igneel from his mountain home of Ben Wyvern. However, before long the draconic warriors of Ignia captured the governor and stole the Red Banner. To this day, it is believed Igneel has retaken the Red Banner and keeps it in his Unseen Hoard.

The Grand Duchy of Rivercrown took the remaining White Dragon Banner, and remains the symbology as a foretelling of death and suffering, to only be unfurled when all other options are exhausted. It has only been used twice in recorded history since the fall of the Midlandian Empire. Once during a Redfallian uprising which culminated in the infamous cavalry charge during the Third Battle of Aston. And a second time against their greatest rivals the Wallatorian Confederacy in 4E 296 with an event known as the Curling War which its unfurling forced the Arcane Council to step in and force peace before an actual pitch battle took place for fear of what the Rivercrowners would do under it.

Analand still remained in the possession of the Silver Banner, though its usage waned over the decades and centuries as culture shifted. Its last official use was during the Great Purge, and has since become associated by King Faust Arkle as a symbol of returning back to Analand's golden age and reforming the Kingdom of Analand & Jabaji.
Item type
Unique Artifact

The Banners & Their Powers

Information lifted from studies by the University of Enchantment
According to legend and physical recordings since the Warlord Period, the Dragon Banners when unfurled are capable of imbuing all those the bannerbearer wishes in a radius that can cover almost if not the entirety of an army if the bearer is positioned in the middle of a force with reinforced vigour and courage.

Under the banner, reports show of troops being magically altered to be mentally incapable of turning back from a battle from fear with some reports suggesting that fear itself is impossible to feel within the radius of an unfurled Dragon Banner. The Arcane Council since their intervention in the Curling War are assessing the magical legality of such items and whether to seize them.

The full unique extents of each Dragon Banner's powers are as of yet not entirely understood, with the University of Enchantment funding research over the course of 4E 297.

For a More Detailed Concise Look into the Great Hunt:

And an Introduction to the Renaissance:


Remove these ads. Join the Worldbuilders Guild
Items
In response to the prompt Tell us about an item that is unique, wondrous, or magical!

Okay.. tight on the word limit this time! 1,300 words!   So, the inspiration for this actually came back in 2018 where we could travel and hug freely and Netflix released their film Outlaw King. In this film, surprisingly filled with so many historical accuracies which was fantastic, featured an obscure artefact of English history known as the dragon banner. In the film, using the dragon banner was seen as a last resort, to rip up the acts of chivalry and treat your enemies like animals. While in history, this isn't fully accurate as the true usage of the banner isn't fully known so it's not considered inaccurate per say, the idea of this captivated me and I immediately knew it would enter a future worldbuilding project down the line.

This is fascinating. I'm intrigued to know more about the powers of the individual banners, though I also like that there is an air of mystery to them. Brilliant history, as usual. <3

Thanks for the comment! The banners are something I've purposefully left undeveloped in my notes to try and give it that sense of them being an artefact of history, but I might write a mini story one day featuring them if something comes to mind!