The call of the ocean sings in Grace Holiday's veins. From a large but poor family in Fogdowns, Grace has spent her life catching as catch can. From a young age she's sought positions on merchant ships and when there are none available she spends her days on the docks loading cargo, hawking fish, or packing shipments.


Though Grace has aspirations of traveling far and wide across the Soldaan Ocean, her true home is the city of Vantam. A fish on her plate, an ale in her hand, and a song on her lips, Grace finds no greater joy than sharing good times with her friends and family.


As the only woman and the youngest born of six children, Grace has developed a fiercely competitive streak. She loves her brothers more than anything but is constantly striving to prove herself against them. She hopes that her latest bid to become a licensed adventurer with Heroic Endeavors Incorporated will finally set her apart from the others and establish her as a famous figure in the city. There is one other reason she seeks a life of heroics. Her oldest brother, Seamus Holiday, went missing at sea. He sailed as part of the crew of The Swirling Sprite for several years until one fateful voyage from which it never returned. She knows it's a foolish fancy after all these years, but a part of her hopes that somehow, she'll find her brother, or at least discover what happened to The Swirling Sprite.

You can easily spot Grace by the elaborate rose and vine tattoo that grows up her left shoulder and neck.

Taking odd jobs at the docks of Shorebend keeps Grace fed and clothed. She's done plenty of work on merchant ships but finding a crew she could stick with more than a few months has been difficult. Presently, Grace is a licensed adventurer under the Heroic Endeavors Incorporated banner, and hopes a career of adventure will prove lucrative.

Grace's drive is to prove her mettle against the dangers of an adventuring life and gain the renown of an established hero. She wants to honor the Holiday name, but her competitive streak demands she make a name for herself apart from her large family, especially her 5 brothers.

She's a great sailor from a line of sailors, and the sea is in her blood. She is an excellent lookout, having spent many long hours in the crow's nest, and climbs great heights with nimble skill and no fear. She's a quick hand with her trusty cutlass, but her true talent lies is with the bow.

A cold drink, a bawdy song, and a few friends are Grace's greatest joys in life.
Waiting and inaction cause her frustration to no end.

Grace is courageous, steadfast, and loyal. She tackles challenges head on and is quick to help an ally in need.

Throwing dice or playing cards is fun, but Grace is known to risk more than she can lose after a few ales at the local watering hole. It is easy to goad her into rash action by accusing her of fear or cowardice, and her natural impatience can get the better of her in a tricky situation. She has a boastful streak, and others sometimes find her a bit prideful.

The Holidays are a large family and she was raised among 5 brothers. Her parents are dockworkers in Shorebend.

Though not devout, Grace finds comfort in Yamin'Ka's teachings, hoping that one day his ethos of hard work will pay off for her and her family.

Grace is confident and friendly. She can come off as a bit brash and arrogant at times.

Grace wasn't raised in Fogdowns because her family was rich. With little to her name except what she can earn in a day, Grace hopes that soon she will strike it rich so that her aging parents can retire in peace. 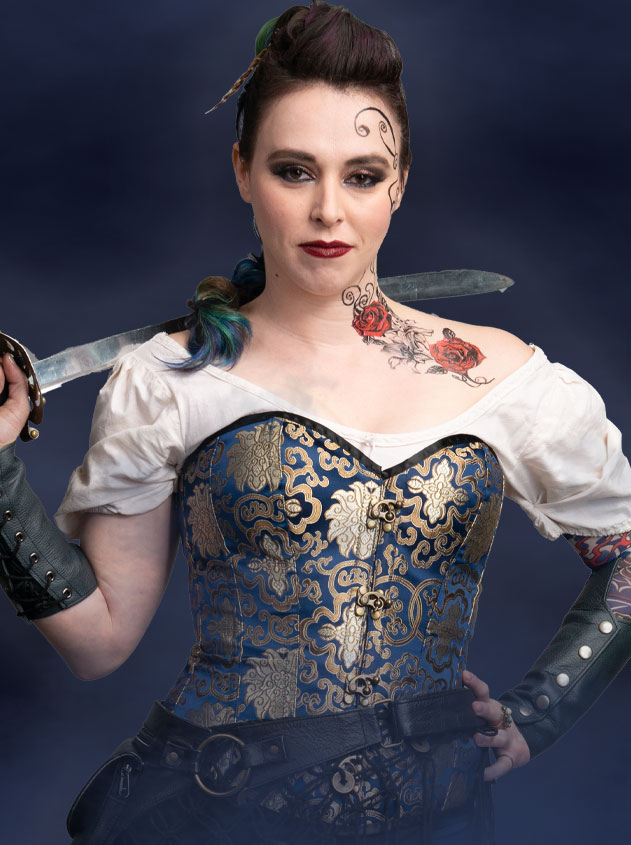