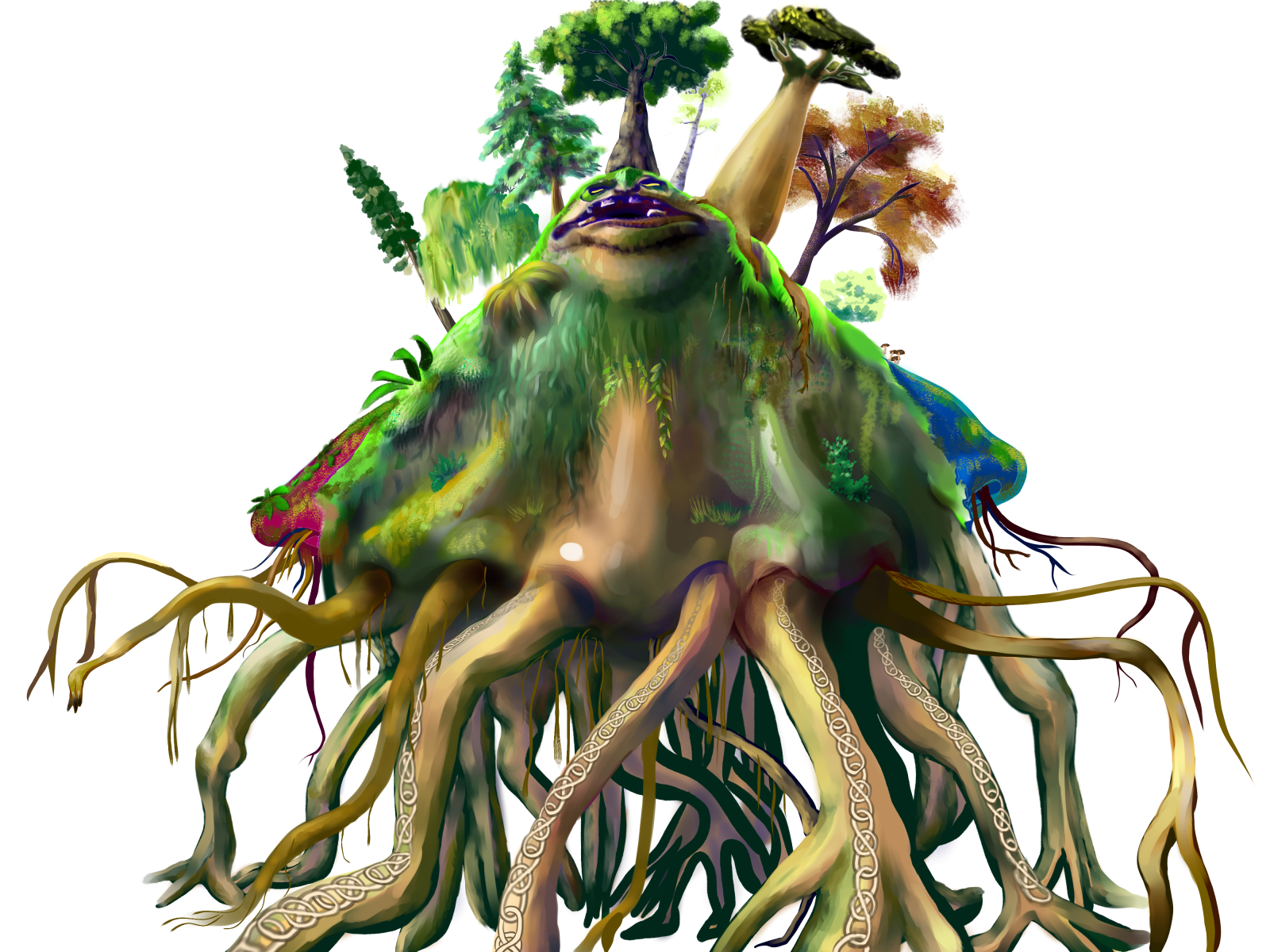 The first Earthly Cryptozoologist (Gari Rajers) to study the TimeKnot in year 2021 wrote simply this upon first observation:

This creature appears to be an extremely intelligent plant matter species who is the product of marriage between an Otyugh and a Shambling Mound...who also mated with a prismatic time dragon and a Nintendo 64 somewhere in there.

Appearance   A walking mountainous maw of noses. The TimeKnot's verdant and vivacious rambling roots, flowers & foliage, are always exhuming and exuding essences of joy every-when-where which it be. Because TimeKnot exists on many planes and forms, its precise size in the third dimension varies from occasion to occasion depending on the experiences desired or required by the perceiver(s).   TimeKnot & the Origins of Cry(S)word SAGA Pluriversality   TimeKnot is an original creation given birth through pure happiness. There are endless legends of the specific origins of TimeKnot & similar stories in any given place and time. For the sake of simplicity, the present author will share that which is most familiar. I, Exinao Eridanus Stardust, did design a friend who could help save my peoples--all of them, each and every-when-where. Having personally taken birth on Earth upon the Solar Eclipse of September 10, 1048 … and having lived through a mortal body on Earth at least until the Moon of May 2014 … I found myself eternally frustrated with the squandering of human potential and opportunities for joy in these times. I bore witness to generation after generation of torture. So it was, nearing the anticipated end of my first window on Earth, that on the occasion of Samhain 2012 I began to imbue a pinecone with all the powers behind and beyond my own joy & frustrations. This pinecone, who came to me with very high hopes and ambitions of their own, would be the keystone in a mating ritual of epic proportions. The neverending trails of kinship and wanderlust that would erupt from the sappy sentiments of this pinecone and their future parents mark the beginning of Cry(S)word SAGA Pluriversality. With the love of its unsuspecting parents, the Sacred Pinecone of Age(les)s(ness) creates infinite possibilities for joy & fulfillment of family fun & togetherness.   Enter Mother & Father & Flowers & Poo   The Sacred Pinecone of Ages (SPA), wanted to become more than it was originally intended to be. It wanted to be a whole house...more. It wanted to be a breathing and living growing forest of homes and divine playgrounds for all beings, in all times and places. However, it knew that by itself, in the society where its parents had been planted, it would not be able to attain this vision. Therefore, just as they had heard in the stories of old, they wished upon a star. Upon that star, they wished for a companion who would introduce them to the greater possibilities--within and without.   So it was that one day, as Eridanus was walking through the woods, that pinecone who would become SPA happened to wriggle just rough enough to drop from the top and bonk Eri on the head. That point of touch and transfer of kinetic energy from pinecone to skullcap of Eridanus unleashed a vortex.   Eri was very close friends with an ancient Rainbow Dragon who had a story of marital strife to share. An ancient Shambling Mound who’s original ancestor was a compost pile under Yggdrasil became married to Bivaye’nue, who was the (in)famous child of a royal Otyugh and a damned Dryadic Succubus. They were not able to conceive child because of the offenses that had passed. Shambling Mound mating protocol called for a bouquet of the greatest flowers ever to be gifted consistently in order to maintain proper mood and space for the mating. Yet the Otyugh traditions called for ever better flowers to be made before they could be presented. In their particular family and royal tradition, the prime purpose of the Otyugh people is to consume filth in order to produce the best looking and smelling flowers possible. Thus, they were never able to produce something sufficient to show their mate. This is where the pinecone would become SPA.   Eri took the pinecone home for tea and talk story. It was arranged that they would be introduced to this couple in order to provide the times and places necessary for the creation of the flowers that they sought. In order to do so, a new form of tree would be created that would fulfill that desire of pinecone to serve as they dreamed. And so they became the surrogate body, eternally hatching new worlds and timelines through digesting and recycling the most delectable waste products from the most simplistic to the most technologically advanced ecologies and societies.
Diet   TimeKnot grows by feasting on magical and technological waste in all forms and in all places and times. They eat from the crudest and grossest to the most subtle and sublime forms. They are capable of feeding on something so ephemeral as feelings and sentiments--such as anger or joy of those playing video games--to something so hard and solid as nuclear warheads. 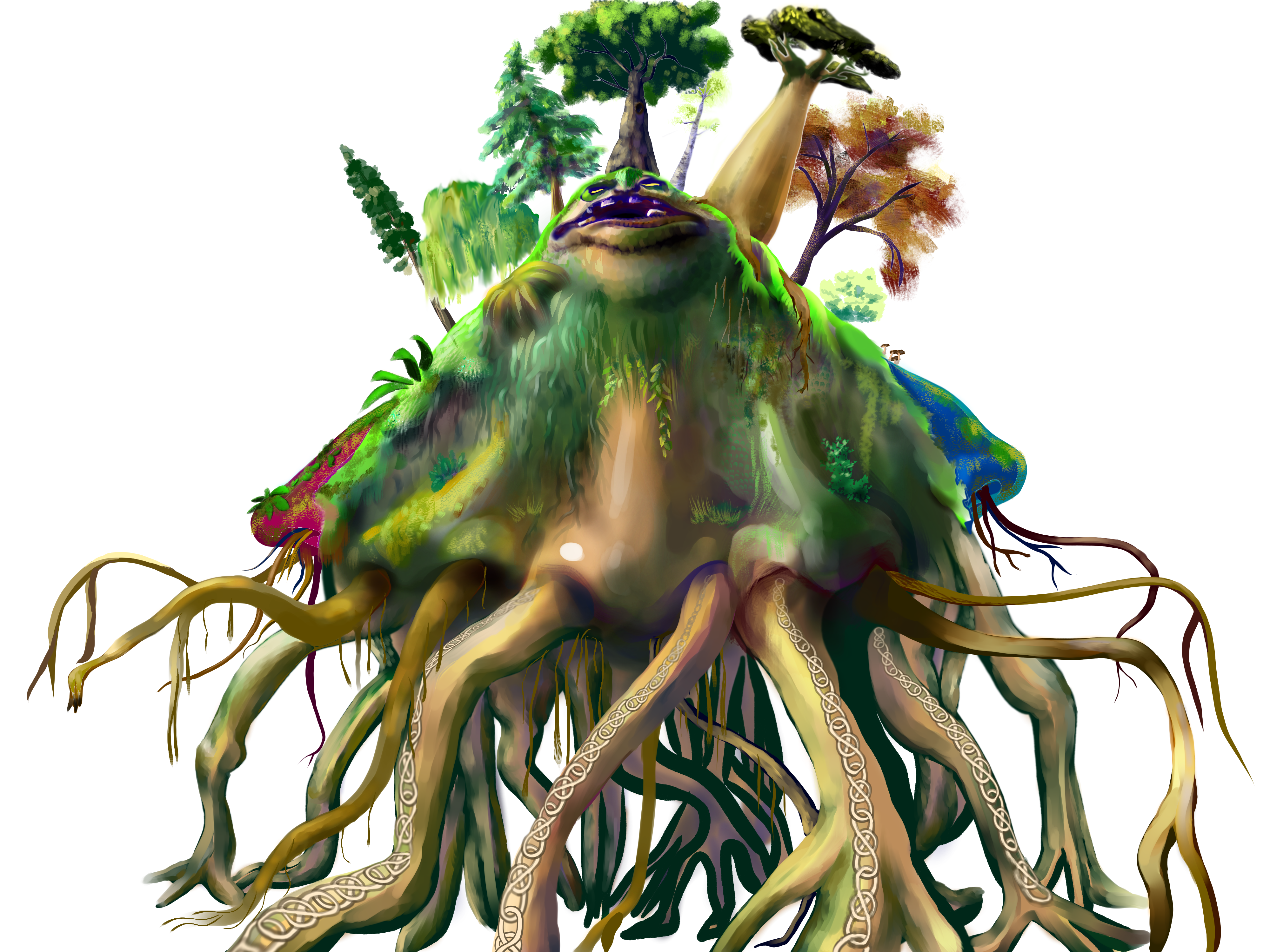 ******* original artwork by @KyleTrueTrue ******* Uses     TimeKnot is a fundamentally necessary aspect of existence in Cry(S)word SAGA pluriversality. Without TimeKnot, there would be nothing to hold or structure existence. TimeKnot gives love to all those objects and feelings, the tools and toys of the forgotten. TimeKnot has every plant and every species of every time growing somewhere on or within it. TimeKnots can be summoned by those seeking access to new realities and friends by following a ritual similar to that scribed by Eridanus regarding the initial hatching of TimeKnot.
Culture   In self-aware communities, those places and peoples and persons who know that they are living inside of a TimeKnot sponsored reality, large temples of play are created which resemble the TimeKnot.
How to stage your world

This is a great article, I love the Sacred Pinecone XD A shame that you were not able to submit on time :( When the challenge is running, you have a button in the article on the right side, below the "open advance tools & options".   A few notes I took while reading:   I love the header picture! This is really a great illustration :D   "A walking mountainous maw of noses." I didn't notice that in the picture, this is so strange! XD   "a Nintendo 64 somewhere in there." XD   Tooltips would be useful with "Otyugh", "Shambling Mound" and "prismatic time dragon" to explain what they are.   I love the Sacred Pinecone!!!   "So it was that one day, as Eridanus was walking through the woods" In the section above that you wrote that it was Eridanus the author of the article and talking in first person, but here you change it to a story about Eridanus but not one he is writing himself. Since that previous section was not in a quote, I think it's best to stay consistent and pick one way to tell the story.   I love the tragic story of the failed mating ritual XD   "And so they became the surrogate body, "I think here you need to clarify who is that "they".   In the origin story in the main text, you talk about that first TimeKnot. Where do other come from? Did Eridanus do something similar with other pinecones or can the original one multiply by itself?

Thank you so much for the feedback. I will add further details. Additional TimeKnots come from the saplings and other regenerative material of the body of the original but can also be created by following a similar process to that which Eridanus performed. I will go through the article tonight and clarify some of the language and pronouns with your comments in mind.   For now, I added hyperlinks to Otyugh and Shambling mound that direct to the Forgotten Realms fandom entries for those creatures. Is that appropriate for WA or should I have my own pages on those creatures?

PS - RE: being part of the challenge or not. I messaged WA authorities immediately upon publishing that I could not see anywhere how to enter the challenge entry and I was given some assurance that I would still be entered but we are in opposite timezones and it has yet to be remedied so we shall see. In any case I love your listing of all the entries and I am checking out your Digvine right now :)

I think a link to the Forgotten Realms should be fine :D   That would be great if you could still enter the challenge! I hope it turns out fine :D   Regarding the Digivine and the list of articles however that's from Xtremepsy just below :p

Hi Jeruviel! Nice story about your creation. My main question is if Timeknot is a singular entity or if there are multiple timeknot creatures? I get the sense either may be true depending on what section of the article I'm reading. I also noticed a small spelling mistake of "kynship" instead of "kinship". I really like the cover image but I wouldn't also display it in the sidebar.

Peace Mark,   Thank you so much for this feedback. Yes it is singular and plural! There is essentially one legendary creature but it manifests in different scenarios according to the needs of the people, person(s), and world(s) who summon it! I intentionally mispelled kinship to follow Daniel Heath Justice's Kynship Chronicles and to bend the conventional ideas of kinship. But I edited it back to standard spelling after your comment since I figure it is not worth an extra explanation just yet.

Ah I'm was not familiar with that reference, by all means spell it kynship but add a tooltip with what you've written here! Glad I could help.

Very nice article! I was thinking first wow the underside of the creature does look a lot like noses and then later in the article I read it was indeed the case :) This seem like such a strange but original creature. I love the quote in the beginning saying to what things the TimeKnot Rambling Mound is related, very strange additions in there :p   The sacred pinecone is something I really like as well. Can already picture a religion related to it xp   I wonder though still is your world of Cry(S)word fully created by the Timeknot or does it only create new realities within your world?

This is a creepy, yet also lovely, origin and being. I believe it falls under 'good for them, but not anywhere near me please'.