The Titans are the remains of the Damamilian People.  They have devolved to primitive family tribes manifesting auras of their ancestral Antepex magics.  Manifestation of Necromancy produces unreasoning terror and is slain on sight with maximum force.  They may become Corrupted ( see Crystal and Corruption ), and become Blood Mages.  These will be exiled, or will kill their tribe before becoming loners or finding Yokai, Bugbear or other followers.
A Titan: 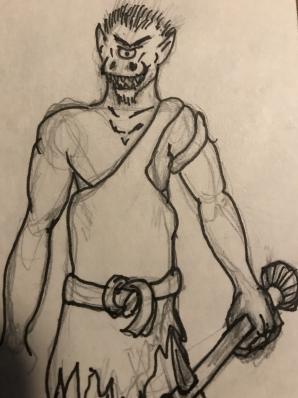 The Damamilian Anteplexes may still be summoned but typically only manifest for most as auras related to the individual's spiritual power. The aura bestows certain powers by type and strength of spiritual power:

The Titans are only found in the Inner Sea region.

Masculine names end in "-ee" or "-i" while feminine end in "-o" or "-oo". Objects and neuter is "a" or "-ah".  Typically the infant is presented a set of objects and what they grab becomes their name masculine or feminine, and has symbolic significance.  Some infants avoid the presented items and end up with names like "Biter", "Crawler" or "Yeller" or "Yowler".

Eye size is one measure of beauty, with a larger eye most favored.  Titans also consider the strength of aura manifestation as a beauty standard.  The barely manifest is dull while robust manifestation is highly attractive. Charcoal face painting with tears or stripes is a beauty addition.  Ornamentation with bits of bone or metal rings highlighted with bright feathers is a favored form of personal decoration.

Titans favor strength both physically and magically in their aura.  Males should be great hunters and foragers. They should be able to cook and prepare the game and other material.  Females should know how to make things like cordage and clothes, and know copper working.

The family tribes fear each other and will try to avoid most contact.  Trading is limited and typically the families stand well back from each other while one individual steps forward showing what they have in trade.  If a young one should see another Titan they find attractive, they may ask the bargainer to make an offer to take in the other or trade off the asking young one. The asker will sent to the trade circle and will manifest their aura as strongly as possible.  Color is judged with wary fear for signs of Necros purple or violet.  They will state their strengths and abilities or knowledge. If acceptable, a marriage price is negotiated over the value gained/ lost, and one young one will change families. This will also produce a 1 year "truce" between the families where they may trade but otherwise try to avoid and ignore each other.

The males are expected to provide for the family while females maintain camp/ home and basic comforts. Yelling and fights are common as individuals test each other physically and magically. It is unacceptable to cause serious injury in 'friendly" contests within the family.  Interfamily conflicts less so, and seen as opportunity to raid.  Raiding a married young one's new family after 1 year by is considered "friendly" conflict and may be settled by, theft without being caught,  a negotiation circle or claim of prize as each side counts the "coups' or bruises delivered by the other and the side delivering more taking the win.

They are basically stone to copper technology with innate magical talent.

The Damamilian language is still spoken and written in true form in the tombs and ruins of the Deadlords.  The Titans speak a broken and balkanized form that is slightly different from tribe to tribe.  Northern Titans and Southern ones or far eastern or far western would have difficulty in communication due to language drifts.

Basic tunics of cord and/ or leather. Skirts of the same. Sometimes leather shoes.

The culture is stripped down to taking what they can, pillaging and raiding to supplement the limited herds and hunting.

The Titans believe in a benevolent first God who lives in Clouds and wears a belt of rainbow.  The God brings rain and sunlight.
The Titan's second God is evil, it is boss of the Dead. The Dead want to bring everyone to their level and hate the living.  Titans avoid the graves or places Titans are known to have died.  They will not make camps in these places.  They also set the sick and dying out, in lean-to shelters or the old, sick and dying are expected to wander away from Titan camps.
Titans are the barbarian survivors of the rise of the Damamilia Deadlords. In the thousands of years since they fled, the civilization has declined to combative tribes that view everything as less and owing to them.
The Titans are massive - standing 4 to 6 meters. They are typically gaunt and long limbed with a fine fur over the body. The hands and feet have six digits. The toes are short and blunt with taloned nails, while the fingers are long with thick nails. The head has spiny, quill like hair. The face has a small prognathism muzzle with protruding upper and lower fangs, flat nostrils and one eye. The ears are pointed. Titans also radiate an elemental aura that provides both defense/ protective and offense powers.
Since the scattering of the tribes the differing elemental types are now hostile on encountering eachother. Technology has declined to stone and bronze with more advanced materials obtained in raids of more advanced peoples. They are profoundly afraid of manifestations of necromancy.
Body Tint, Colouring and Marking
Skin color is blue to blue green, verging from pale to indigo. The lips are red. Eye color is usually Red, blue or yellow.  Green and other shades are uncommon.

I love the naming tradition! :D I love the sound of their gods too.

Unfortunate that they still must feel they are so superior. If they could work with other intelligent species, I’m sure they could re-build their empire and probably have a bunch of other creatures subjugated to them.

Stupid littles have no aura. Not real people! Talking animals. Only some have aura! Those are dangerous!