Though coins called Dukes were used in the Marivan Empire there is no direct linkage between that coin and the modern Duchy's currency. In the early years of the settlement of Tarusia the predominant means of exchange was silver, typically carried as chains or bars and hacked to weight.
It was in 37MD, during the reign of Caddock, that the first coins were produced in the Duchy. With the Duke's head on one side they rapidly became known as Dukes, and this formally replaced the unimaginative official "Duchy Coin" in 59 when Cadrill issued his first coins.
Carric's Reforms in 150MD included the issue of copper coins of lower value and the 8 Duke value "Great Duke". Over the following years the currency became widespread across northern Tarusia but gradually lost its value through the mixing of copper with the silver. Over the years there have been several cycles of this, making comparison of costs at different times difficult. For the last century the coinage has been stable at 10% copper with harsh penalties for moneymakers who exceed this amount.
Despite this, increasing availability of silver has resulted in the purchasing power of a duke dropping by around a half in this period.
Over the years attempts have been made at using gold for higher value coins but variations in the availability of gold, and thus its value relative to silver, have resulted in inflation, coin famine and other unwelcome economic events. For large value transactions, credit notes issued by banks or moneymakers are now common in some parts of the Duchy.

The coins are discs of silver or copper with an image of the Duke’s head on one side, set inside a circular border, to deter coin clippers. Both sides of all coins are marked to indicate cuts for halfing and quartering. This side bears the moneymaker’s mark in the lower half and the Tithing mark in the upper. The values are only distinguished by the size of the coin, a point of confusion and potential for fraud that visitors to the Duchy often learning of later than they would have liked. 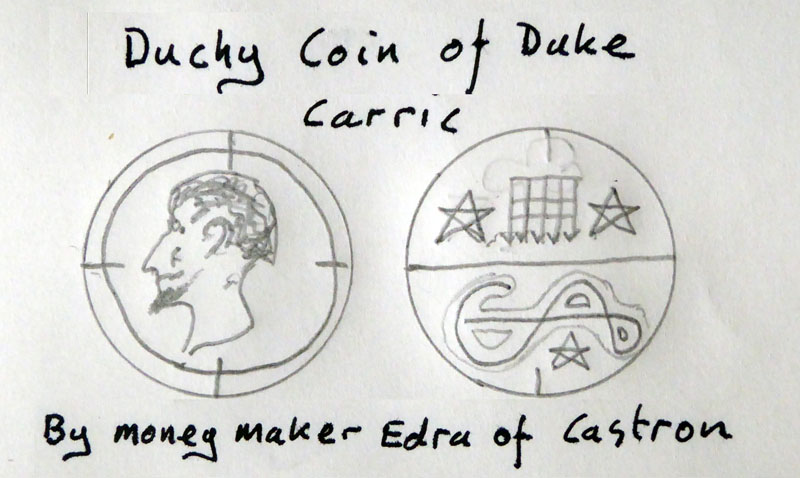 Duchy Coin by Ed Andrew
Art(?) & image by Ed Andrew
The coin is generally considered to be valid as long as the border of the duke’s head side is complete and the marks on the reverse are identifiable. Coins worn beyond this point are no longer considered valid and are usually sold back to the moneymakers, who will pay by weight.
The emerging credit notes are of no standard size or format; but include in their design the promise to pay the bearer a given number of Dukes.

The most important point is that copper coinage, ie semis, bits and tags, is only valid for amounts less than a double (so a Great Duke and 4 semis would be acceptable for a 10 D transaction). If both parties are happy to deal in greater amounts of copper then fair enough. But without that agreement legally there has been no attempt made to pay beyond the 2 Duke limit, plus any silver tendered. The reason for this is that the scrap value of copper in the coins is nowhere close to that of the equivalent monetary value in silver.
If you find yourself with a large amount of copper coinage you are unlikely to be able to sell it for more than 75% of face value and often less. This can be a significant issue for small traders and often buying in bulk, or at least multiples, and paying in silver will get you a discount.
Beyond this learn the sizes of the coins - those from areas where coins are of different design, shape or material are frequently caught out by thinking that a silver coin is worth, say, 10 times a copper one - depending on the coins it could be anywhere from double to 64 times the value. Alas, especially in ports and near the borders you will find the unscrupulous who will try to take advantage of this.
Credit notes of up to a Perro pass freely as coinage in several tithings but for large transfers it is common for the transaction to be completed at the issuer’s and for a new credit note to be issued to the receiver of the money.

Put up your dukes An offer to make a wager or a challenge to “put your money where your mouth is”.
Not worth a Corman worthless, named after Duke Corman whose head adorned the most heavily debased currency issued in othe Duchy’s history, at only 25% silver. This was driven by the financial stresses of the Covrin Wars.
Purse full of Copper Audacious and/or optimistic, from the person who tries to settle their debts with more than 2 duke's of copper coins.
Morton A purse or moneybag, named for the capital of the Duchy as the place you'll find dukes.

Why can they not just have one silver piece? Three is too confusing. And then they cut them up! It is far too confusing.
— Sulivar Ur Ballu, Sutran merchant, Orris

You may encounter Dukes that have been cut in halves or quarters. This is legally acceptable but seen in some quarters as an act of rebellion. The names of the copper coins (semis, tags and bits) are not "official" and prices are posted as fractions of a Duke, for example 21/4D.
The Perro is used as a unit of account worth 256 Dukes, though you will never encounter such a coin. Where prices are quoted in thousands of dukes, each thousand is reckoned as 4 Perros (ie 1024 dukes).

Some Current Prices at Morton

Modest meal at a inn - 4D
Large loaf of bread - 1D
Pot fowl or large rabbit - 2D
Working knife/dagger - 5D and up
Plain gold ring - 1 Perro
Small house - 100 Perro
Many of the wealthier have for some years been pushing for gold coinage, or similar, for higher denomination but the recent increase in use of credit notes has reduced wider demands for higher denomination coins to those more concerned with status than trade.

Commerce at the Grand Scale

For large transactions the sheer weight of coins required becomes a significant issue. The logistics are eased by a well developed system of credit notes exchanged between banking houses found in most of the Tithing Towns and significant ports. For international use, those issued by the The Merchant Mages are most respected. These are not entirely risk free for banking houses do sometimes go bust - but ships can sink, caravans get waylaid and so on.
If dealing in foreign currency you will find the price broadly equivalent with the scrap value of the foreign coins. Merchants specialising in foreign trade may offer better rates but they are seldom found outside the major ports. If the silver of the coins is alloyed with base metal other than copper, or more than 10% copper then the price will be reduced for the expense of rendering the metal suitable for recoining.


Making a Mint - Coin Production in the Duchy 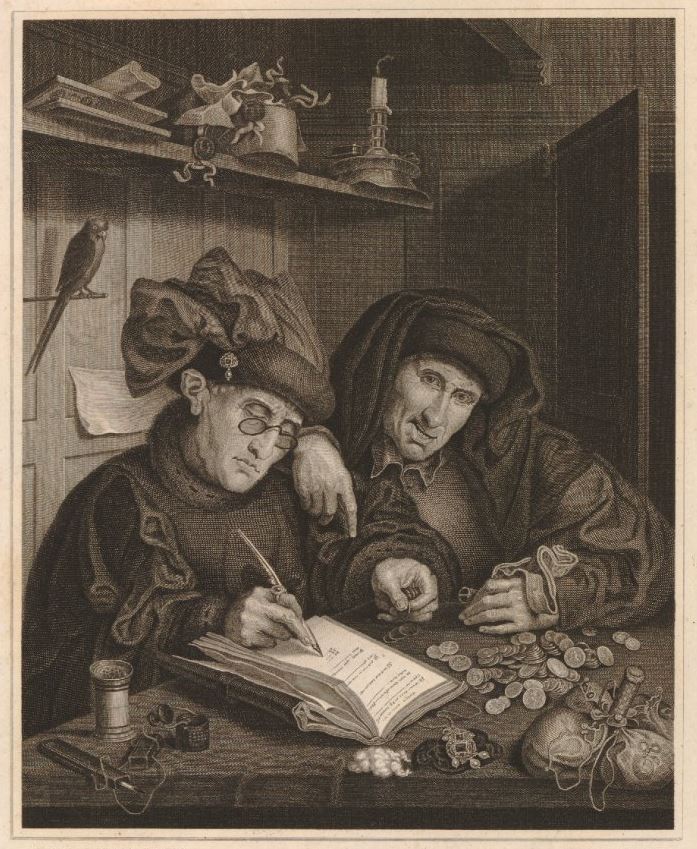 The Misers, Painting by
Q. Matsys, engraved by J. Fittler
Coins are produced by moneymakers who operate across the Duchy, though the numbers in each tithing vary according to need. They are licensed by the Tithar to whom they are accountable for the quality of the coinage. The Duke’s assayer in turn oversees the wider quality of the coinage across the Duchy. Most moneymakers employ several strikers to assist in the production process.
A perro of pure silver may be exchanged for 256 Dukes at a moneymakers. The weights are equivalent and the money maker's profit comes from the ability to substitute part of the weight with copper. A prudent moneymaker will only add 8% copper and will mint typically 250 coins to the perro to ensure that they are safe from the laws on fineness of the coinage.
If a moneymaker’s coins are called into question this is a serious charge for the moneymaker and their strikers, who if judged guilty of debasing or short weight will loose their right hands. This punishment is collective for the whole workshop and serves as a practical limit on the size of these businesses.
In addition to any charges of bad money from the public, the Tithars monitor the currency by assaying samples from the tax revenue; the Duke’s Assayer does similar and compares these results with the returns from the Tithars. The Tithars are also responsible for ensuring that the issuers of credit notes have the assets to back up their issued notes.