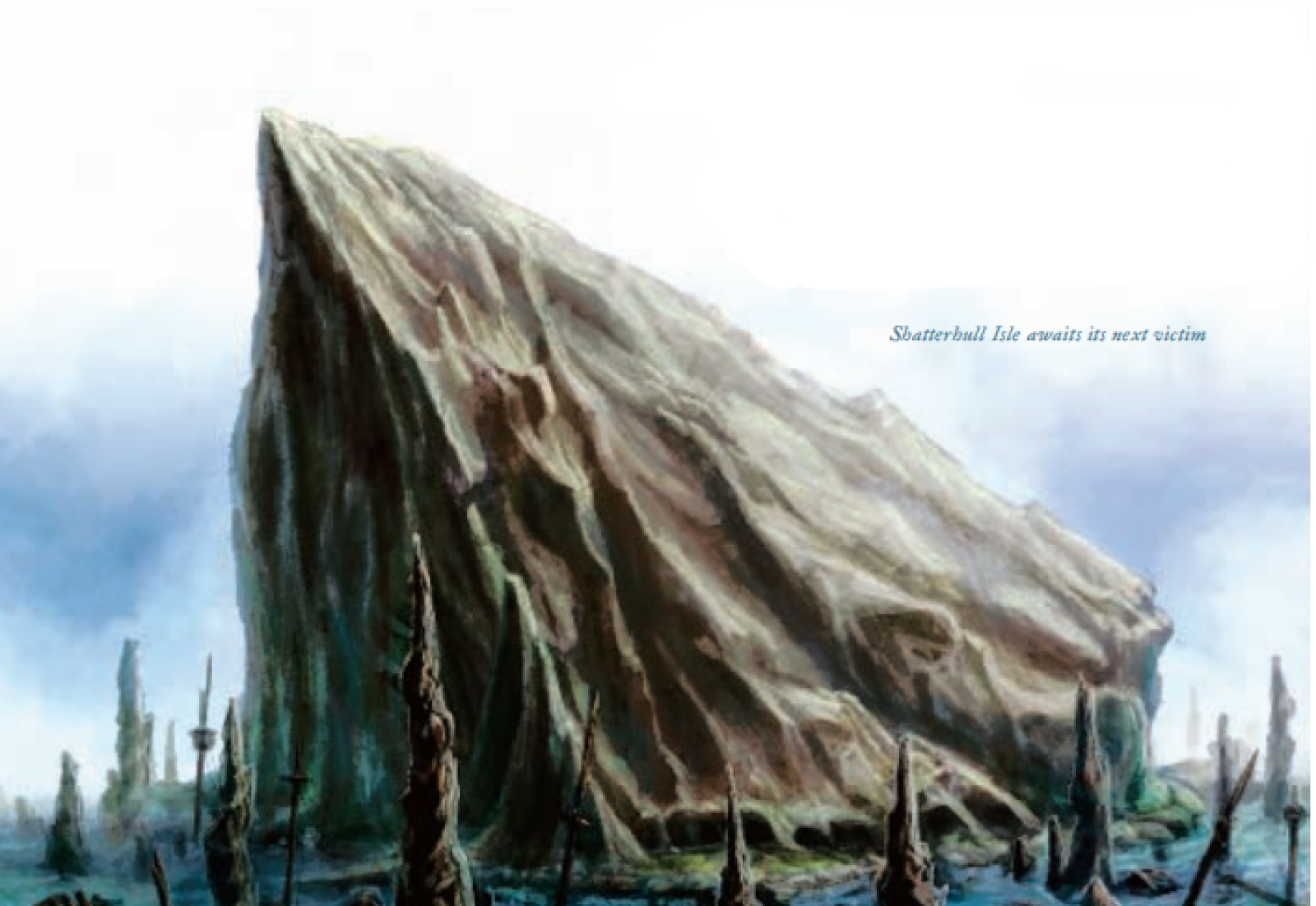 Off a storm-torn coast lies Shatterhull Isle. When terrible storms arise, ships are often driven against its terrible rocky shore, spilling their contents for the hags called the Daughters of Mahogra. There are legends that speak of the hags and coven of Shatterhull. They speak of riches that the hags hoard if only one could get past thing. Others speak of how their undead minons grow in numbers everytime someone is foolish enough to try for these riches.   Regardless sailors are superstitious about the area and the strange weather that happens near the island. Better off steering clear and sailing for clearer waters.

This aptly named island is little more than a jagged mass of volcanic stone that thrusts up out of the water. The peak of the island is some 75 feet above sea level.   Scattered in the waters around the island are several battered ship hulks and the spars of jutting stone that caused their wrecks.

The weather is often stormy whenever an unfamiliar boat approaches the island.

Shatterhull Isle has not always been the danger that it is now. For many years, it was simply another barren island off the coast—dangerous to approach, certainly, but easily avoided by ships with no reason to go there. All that changed, however, with the coming of the Daughters of Mahogra.   Several decades ago, the ancient sea hag Mahogra was slain by a heroic party of aventi, merfolk, and aquatic elf adventurers, ending the threat to their homes that she had presented. Though Mahogra was slain utterly, her three daughters (Ambraga, Kurula, and Gakara) escaped the assault. In time the three of them found themselves drawn to this desolate and remote island, pulled there by dreams of their mother calling to them from the storm lashed craggy shores.   After a period of threatening one another and other such power ploys, they consecrated their sisterhood anew, forming the Daughters of Mahogra, a true covey of sea hags. The powers they gained from joining together were great and terrible indeed, and they immediately put these new powers to work for them. In the years since, they have sought to gather wealth and power, with the ultimate goal of making the adventurers who slew their mother pay for their temerity.   To that end, the Daughters of Mahogra use their covey powers to lure ships to their doom on the razor-sharp rocks that surround Shatterhull Isle. They gather up the loot from such ships and barter it away for magic and other treasures, while allowing their ogre servants to feed on the crew.
Type
Island
Location under
Krakennauricht
Owner/Ruler
Ambraga
Related Reports (Secondary)

Answering: "an area or geographical landmark wrapped in myth, legend or superstition"
Visit Shell Mel's Competition Page Check all other answers to this prompt Competition Homepage