Witches, also widely known as practitioners, are a supernatural species who both are born or somehow acquire magical abilities, or follow the Wicca traditions. Formally, witches and warlocks are anyone who is actually born with magic and have inherited abilities. While practitioners are those that practice wicca. Though even practitioners are typically still referred to as witches. Witches are one of the largest supernatural groups, as well as the most frequently seen.

White Magic is a type of magic that is used and intended for selfless and good intentions. This magic revolves around purity, betterment, and benefit, meaning that it's never used for selfish reasons or to hinder someone else. Protective charms and amulets, cleansings, blessing, and healing.
Black Magic, also known as the dark arts, is the opposite of white magic and is used for selfish and with harmful intentions. This magic revolves around self, and if taken further, then it can also be used for vindictive and chaotic purposes. A witch who practices black magic is not necessarily dangerous or evil.

Necromancy is sometimes filed alongside black magic, but many look at it as its own practice. Necromancy is the practice of raising and controlling the dead. It is also the practice of summoning demons and making deals with them.
Candle Magic is generally used by traditional and kitchen witches and revolves around the idea of using specific kinds of candles in spells. The color and scent of candles are essential and are always chosen with great care.

Elemental Magic is using magic that calls upon the elements. A witch can not create said element but can manipulate and utilize it as well as shift it. For example, a witch can turn water into air.
Folk Magic, also known as low magic and spell magic, is a wide range of magic that many people will think of when thinking of witches. Spellbooks, chanting, blood magic, etc. can all be found here. It is generally used for personal reasons, good and evil, and has heavy ties with hoodoo.

Voodoo is a style of magic that also contains a religion that is almost exclusively practiced and worshipped by those in Louisiana, most notably, New Orleans. It is a variation of both ancestral magic, ceremony and ritual, as well as white and black.
Hoodoo, not to be confused with voodoo, is a style of magic that does not have a religion associated with it. It is a set of practices with heavy reliance on folk magic, and though it is also practiced mostly in Louisiana, can be found in other areas as well.

Ceremonial or Ritual Magic is a type of practice where a spell must be done via ceremony or ritual. This can also branch into sacrifice and blood, where a witch will use the life force of another creature or person, be it their energy, soul, or blood, in a ritual that they're doing. This style of magic is heavily frowned upon but is by far one of the strongest types of magic.
Ancestral Magic is a form of magic that draws from the ancestors of witches. A witch, if consecrated and put to rest on blessed land, will then be added to a pool of ancestors that share their magic collectively with all those who they deem worthy. Ancestral magic is one of the most powerful due to the wielders having a constant and steady stream of magic but is also one of the most unpredictable. The souls of the ancestors have been known to cut off their power and withhold it when unhappy, as well as be able to take minor control of some of those who violate their rules. Also, if a witch goes too far from said blessed lands with no amulet or charm to make up for the distance, then they are cut off.

As one may be able to believe, witches are just as vulnerable as humans when it comes to most things. They do have the aid of magic, but a deadly wound is still just that, fatal.

Officially, there are seven types of witches that all witches belong to. Note that this is the type of witch and not the kind of magic that they use. The type of witch can influence how good they are at a specific style of magic(see 'forms of magic') but doesn't mean they aren't able to use it. Mostly, this affects what covens they belong to and their ideals. For example, traditional witches are typically not found in a Gardnerian witch coven and will not have the same morals and beliefs.

Traditional witches are those who practice witchcraft that predates Wicca. Typically, traditional witches are deeply knowledgeable about their lineage, history, and are highly conservative and opposed to change. Their customs and ways of practicing are rooted in history and have shifted little since their ancestors first discovered it. Though the majority of traditional witches are more likely to keep to what many call the ‘old magic,’ there are some that will deviate and bring a more modern look into their magic.

Created by Gerald Gardner, Gardnerian Wicca is an elite group of witches who do not allow every witch into their ranks. One must be initiated after fully completing their studies. Any witch that claims to be a Gardnerian witch will always belong to a coven under it, meeting one who is not means they gave false claims. Gardnerian witches have strong ties to nature and symbolism, rituals consisting of most of their practices. Their two main principles include: practicing magic and doing spells that will not bring harm to others, as well as that whatever energy one puts out, it will come back to them tenfold. For example, if one helps a friend for selfless reasons, that same positive energy will return to them. Basically believing that everything one does has a cause and effect.

A Kitchen witch is also known as a hearth witch and is basically what its name implies. These witches do most of their work in the kitchen and deal with herbs, food, essential oils, and positive or white magic. These witches view the home as a sacred place that must always be free of dark energy.

A solitary witch is any witch that does not practice with another and doesn't belong to a coven. Most hotspot cities disallow solitary witches due to the risk that they bring and most supernatural, including witches themselves, look down upon solitary witches. Most solitary witches are known to practice black or dark magic, and other frowned on practices with no care or consideration for others and their consequences. Though this does not include all solitary witches, enough has caused issues to give any witch labeled this a bad rep.

Known to some as the 'true witch' because they are born as such, hereditary witches are the most popular and well-known type of witch mostly because of lineage reasons. These witches are born with power passed on through family members through generations. They are also known for being the only group of witches to renounce their power, consequently giving it up and breaking the chain. For this, hereditary witches are looked at in a different light, especially among family members who do not wish to see their line stop solely because of one person.

Eclectic witches are witches who don't narrow themselves down to one practice, tradition, culture, religion, etc. when it comes to witchcraft. Instead, they pull from many different areas and refuse to limit themselves. This is not to say that these witches do not have a deity they wish to or a coven that they belong to, but they do not narrow their scope like most of the other types of witches. They are almost disliked more so than the solitary witches due to their refusal to limit themselves, and they're "I do what I want" style of attitude.

Witches and their relationships with others range from positive to negative, but many see them in a neutral light. Witches are the only modern supernatural group able to vocalize what and who they are and are not immediately sentenced to death, though this obviously was not always the case.

Witch and Human have a standard neutral to a positive relationship, and probably the best relationship among humans. Witches are typically allowed in human spaces, and those who do know about witches allow them and trust them as allies.

The relationship between witches and Vampires is a rickety one, always swaying to the far left or far right and never meeting up in the middle. In the past, witches and vampires have been allies more so than enemies, but as the years carry on, these changes along with attitudes. Vampires grow power-hungry, and their first target is always witches, witches fight back, and bad blood begins to form. A treaty will form to bring about peace for a while before the cycle starts again. One will find that many hotspots where a vampire or witch is in charge, that the leading faction will limit the power and number of the other faction.

There has always been bad blood between witches and were creatures, mainly because the curse that were creatures must carry throughout their life was first bestowed on them by a witch. This bad blood does not mean it affects everyone's viewpoint, but many factions still carry hatred for witches since they are constantly cursed and singled out by witches.

Similar to the relationship between witches and humans, witches and Shapeshifter typically get along or meet in the middle, at least. They hold no strong emotions over shifters and vice versa. The duo can create a hybrid creature known as a skinwalker.

Typically witches are known to steer clear of Faerie due to their magic being so harmful to witches. Faeries are both easy to startle as well as easy to anger, and their powers are known to act up. Because of this, witches will choose to stay away from faeries. But that's basically the only reason. Kitchen and Gardnerian witches especially have relations with faeries and even deals that benefit both sides. 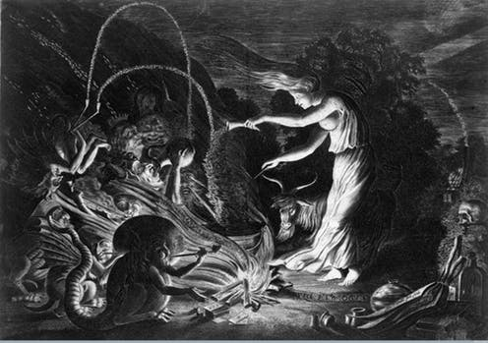