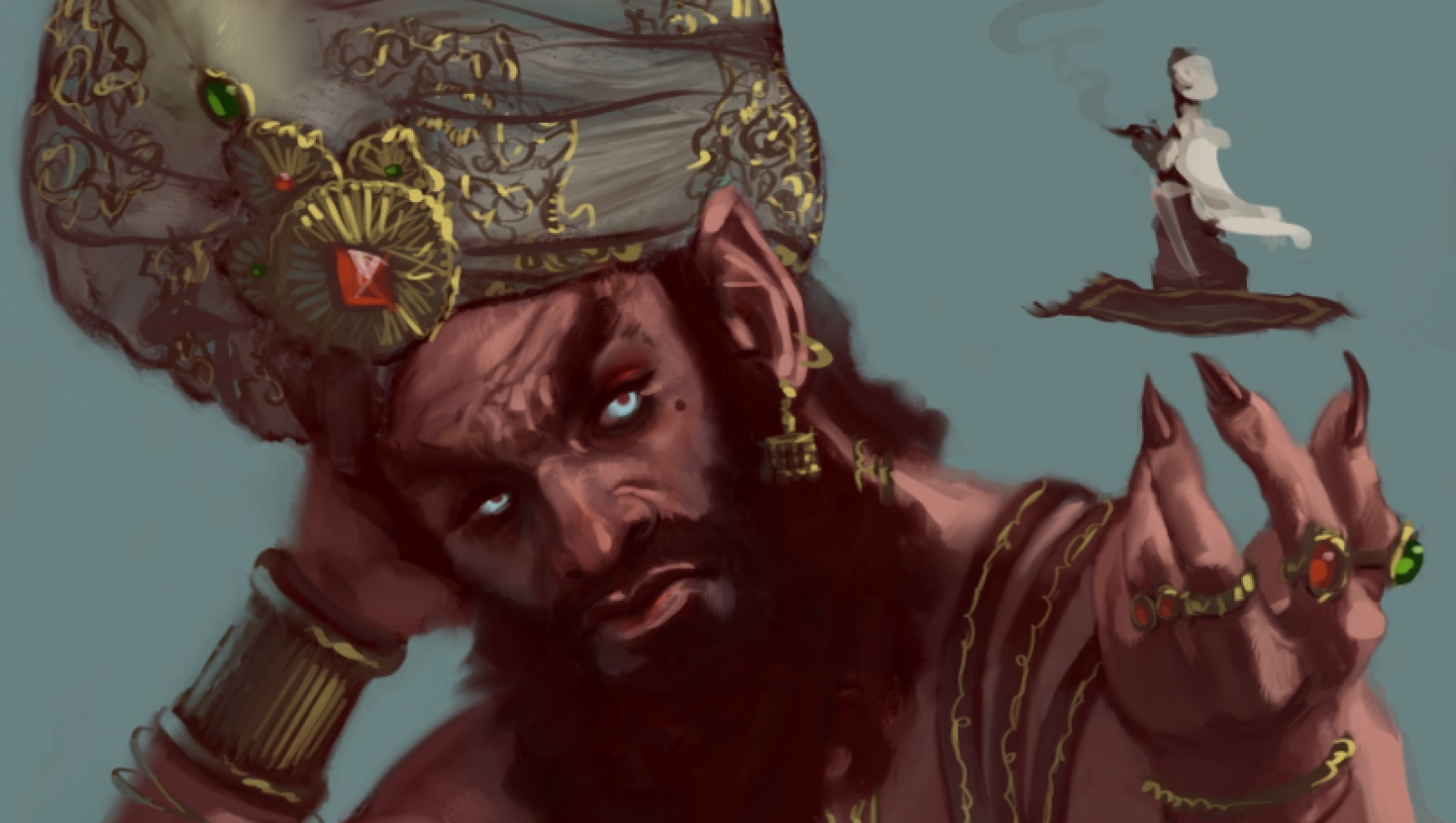 In game mechanics
While Genies themselves cannot be played, fledgling Genies, also known as Genasi (as described in this article), can be and will adhere to the following stat rules.   Social difficulty: ★★☆☆☆ - The Genasi are often liked though misunderstood, with their origins dictating their temperament. Also, if the wrong people find out that they can, even eventually, grant wishes it could lead to a lot of trouble. For the most part they get along well in civil societies. It is likely in the Genasi's best interest to hide that they are actually descendent of Genies.   It is worth noting that the Genasi being 'Genies in training' is not common knowledge. Rather people consider them as simply beings from the elemental planes, but there are those who are aware, and those who are more than eager to harass and enslave a Genasi for the hope of having their wishes come true.
The world of Ayn, or sometimes referred to as 'The Mortal Plane', is the most recognized and teeming with life and conflicts, but there also exists alternate planes often unknown and unvisited by mere mortals. The Realm of Light and Realm of Dark help make up a form of afterlife (and to some lesser extent Realm of Shadows), but there are also the four elemental planes (earth, fire, wind, and water). These planes serve as a sort of 'storage and experimentation' plane for Ciel - Goddess of Life so she can create without disrupting the natural order (More than she had already). However, managing and keeping track of these planes proved to be a larger task than she anticipated, and so she created and appointed rulers capable of harnessing the elements of their homeworld and maintaining power over its denizens. 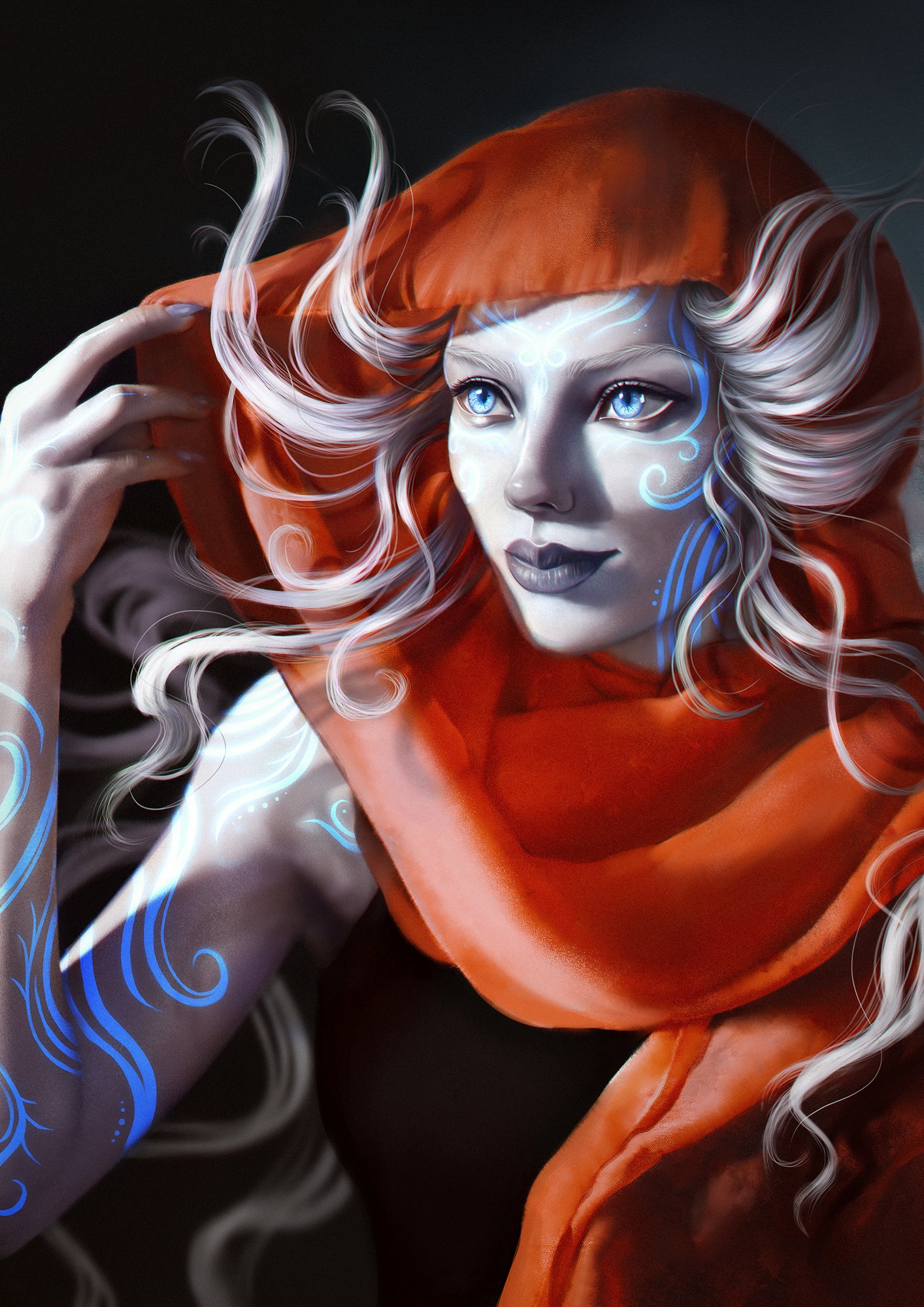 by Illy Kostova
Although Genies are certainly unique compared to Humans, they are share many similar qualities with their own kind, or more specifically, their environment and the realm that they hail from. These differences are so dependent on that area that each subtype of Genie (as chosen by which realm they are from) has its own name and features: 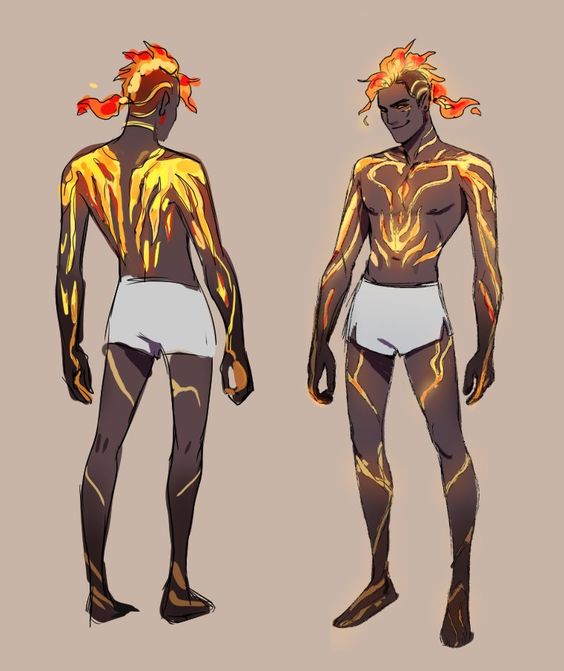 Genies have a very interesting and unique way of growth. When born, they appear as any other child (Except for the vibrant skin hue, of course), but on their bodies are tattoos, or more apt, dormant runes. Small at first, they grow as the child does, finishing the 'body art' when the child reaches maturity into young adulthood. It is at this point that every self respecting genie, now known as Genasi, strikes out into the world for their ultimate goal: To cast their first wish.

Indeed, even martially minded Genasi are gifted with magic in some small part and capable of casting at least one wish, though they may take longer to achieve this than their more spell focused kin. When this wish is cast, their markings come to life, glowing with radiant energy, signaling their ascension to a full fledged Genie.

There is one final stage, though rarely do any Genie reach such heights. When appointed the ruler of their home plane, known as the High Djinn, they ascend to their highest form and become the apotheosis of elemental transcendence. It is revealed that the tattoos on their skin were not mystical ink, but rather latent power seeping through the flesh in unique patterns. The title of 'High Djinn' was chosen as the first to ascend to such status hailed from the Realm of Air, and of course they took every opportunity to not only lay claim, but hold this fact over the other elemental lord's heads.   There can only be one High Djinn for each given realm, and this promotion can only be given willingly by the current title holder through a ritual that will forfeit their life. Since Genies are incapable of dying of old age, this is done rarely. However, because of its rarity, it draws a spectacle that many Genies cannot resist, and often turn into full events. 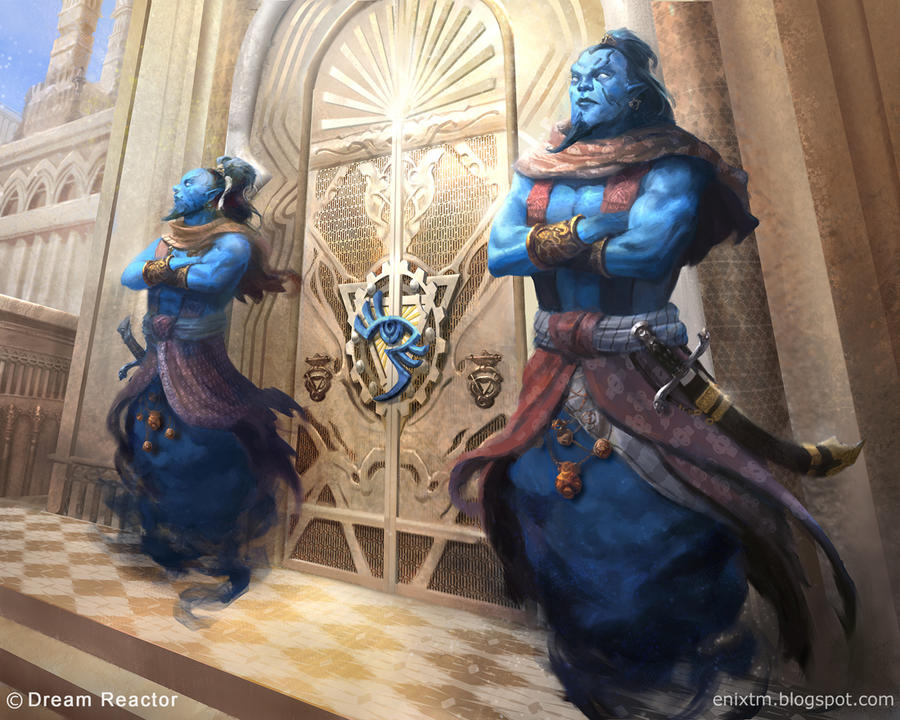 by Mihai Radu
Other than living on their respective planes, Genies prefer a life of opulence. Large palaces with impressive gardens, and grandiose fountains, a Genie's abode is a splendorous marvel to behold. Even if a Genie is trapped (willingly or not) the insides of their container will be a place of comfort and luxury.   Despite not living in fear of harm or burglary, some Genies will hire guards to prevent hijinx or an interloper finding their newborn and naming them before they can. A Genie's palace usually is staffed by many servants and slaves, and houses exotic animals and resplendent artifacts.

To a Genie, it is not their name that carries much significance but rather the title that follows, in a tradition that seems silly, but carries a lot of importance. When a Genie is born they are given a name, but only after a month has passed are they given a title. This timeframe was conceived to ensure the parents came up with the perfect definer of their child's legacy, however there was a caveat: Whatever is the first title assigned is the one they will live the rest of their life with. Naturally this created a sort of game whereupon unrelated Genies would hunt the child for the mischievous purpose of assigning it a misbegotten title, likely something demeaning, that the parents would have no choice but to accept.

Fortunately, Genies often take on superfluous titles based off of the deeds they achieve in their life, leading to many of these wronged young to strike out and drown out their misbegotten appellation.
Male: Sonesh, Baimaf, Dhissakash, Muhash, Seedumu   Female: Shadhe, Nyevi, Tiyuto, Idhassa, Wazzari   Titles: The Magnificent, The Magnanimous, The Beautiful, The Omnipotent, The Stinky

Due to their distance from the mortal realm and the societies within, Genies have a very warped sense of morality.  Owning slaves, kidnapping, theft, and other morally dubious actions are seemingly fine so long as they are not conducted with malice, but rather mischief.  This means that stealing a Genie's prized artifact for the sake of a light hearted prank (Especially when they intend to return it) is fine, but stealing a Genie's artifact to spite them or out of covetous nature usually is not.   A prime example of this are the Human zoos many have in their estate.  Poor souls that wandered into the elemental planes only to be picked up and forced into a life of luxury.  Fed with immaculate dishes, draped in luxurious fineries, and housed in stunning abodes, it seems an ideal fate, until one considers they are unable to leave and ultimately at the mercy of their powerful masters.  The Genies, on the other hand, view the affair like owning a pet, wishing them no harm but recognizing the chaotic world of the planes just beyond their walls will surely spell demise for their otherwise frail bodies.  There is also a heavy dose of subconsciously viewing the person as inferior. Many Genies see servitude in their stead as an honor and a privilege, often confused when others don't share their world view.

Considering how monumentally rare it is for the people of Ayn to meet a Genie, it makes sense they are considered a myth.

Although not at war, Genie disregard and mock their kin who are from different planes. A Genie from the Realm of Air will describe one from the Earth Realm as 'dirty and smelling of the worst soil' while their target may reciprocate with labelling them as 'cowardly and so frail that their own stiff breezes could knock them over.' They will even go as far as to insult features of the plane. Despite this animosity, they are not hostile to one another and will rarely attack, opting instead for petty insults and pranks.   This can almost come to an endearing level where, like schoolyard children, they pick on one another with underlying tones of respect, clearly the product of two powerful beings recognizing their important omnipotence.

"Why would I want to swim in the ocean? Fish poop in there. It's a disgusting broth of whale carcasses and trash. I'll pass, thank you."
— Nyevi the Marvelous (Air Genasi)

"Don't worry, I wouldn't expect an airhead to understand the majesty of the ocean's beauty."
— Sursah the Grand (Water Genasi)


The Genasi, on the other hand, often get along with the civil races. Their mannerisms and unique appearances can cause some friction but for the most part they are accepted. It is only if they are found out to be young Genies do they have to fear for survival in populated areas, as many covet the potential to have their wildest wishes fulfilled, whether the Genasi has cast their first wish or not.


Considering their immense power and origins in more chaotic environments, they are not often not devout worshippers. This isn't to say that they do not believe, but the Gods have no reason to interact with the elemental planes and the Genies would rather it that way so as to not interfere with their rule and undermine their presence. At the very least they recognize Ciel as their creator, but have less of pious reverence and more friendly respect with some even considering her an equal. They are wise enough to not step out of line, however, acknowledging that if she had to she could simply will them away with the help of her sister Eos - Goddess of Death.   If there was any semblance of worship, it would have to go to the High Djinns, of whom acts as a sort of 'King of Kings' commanding the most power in all of their appointed planes. Depending on the hubris of the High Djinn, this worship can range from recognition to one's power and friendly meetings, to full blown temples erected with priests assigned. 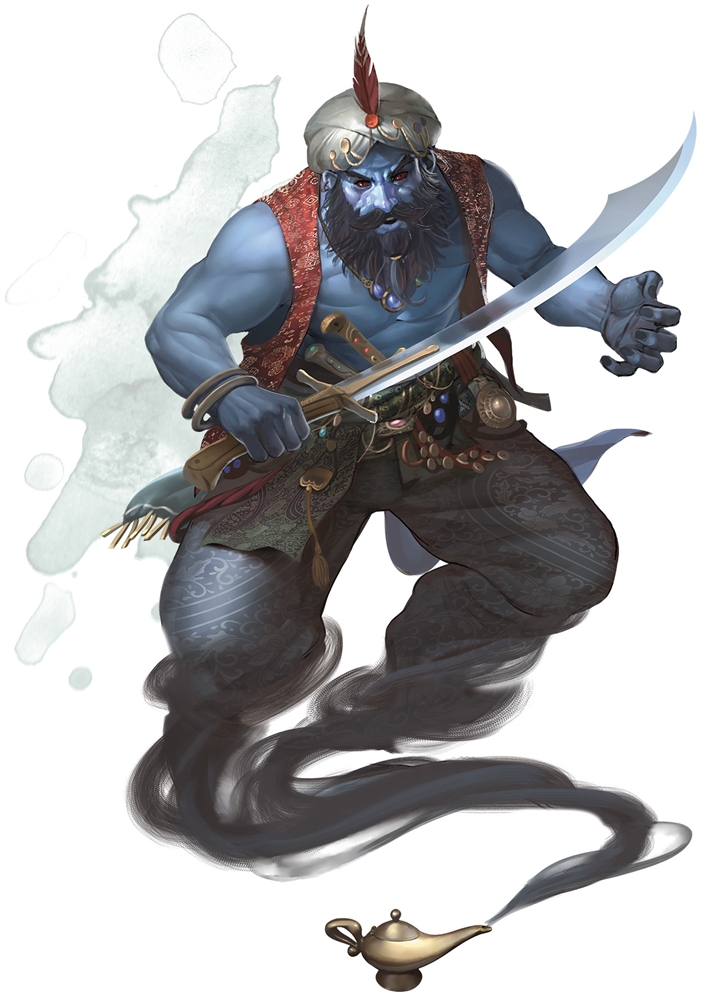 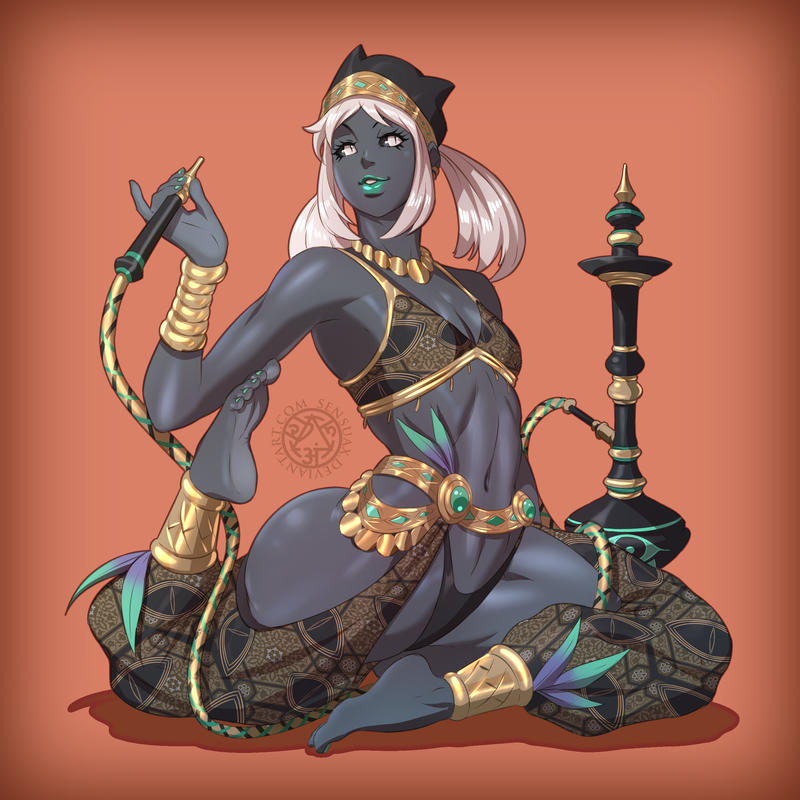 On Genies and Lamps

Although Genies are incredibly powerful, they are subject to their own whimsy and enjoy a good story, with their favorite being a marriage of mortal greed and their own twisted creativity. Many Genies will often ferry themselves to Ayn in a small item, usually an oil lamp, though other items include a ring, jewelry box, or amulet to name a few. From here they lie in wait until a mortal finds them, upon which time the games begin. First the item needs to be activated which can be as simple as touching it, or as complex as a light puzzle or small sacrifice. Once the conditions have been met, the Genie springs from the container (Usually with over the top bravado and flair) and introduces itself, laying out the rules of their wishes.   Make no mistake, these rules are arbitrary. A Genie can cast any number of wishes for (almost) any request, but as they see it, any chance to add to mystique and assert their dominance is a good one. Once agreed upon, the fun begins, as unbeknownst to most mortals, Genies have no intention of playing fair. Rather they aim to take a 'Monkey's Paw' approach, twisting requests, even the most specific, to whatever amalgamation the crafty creature can conjure. 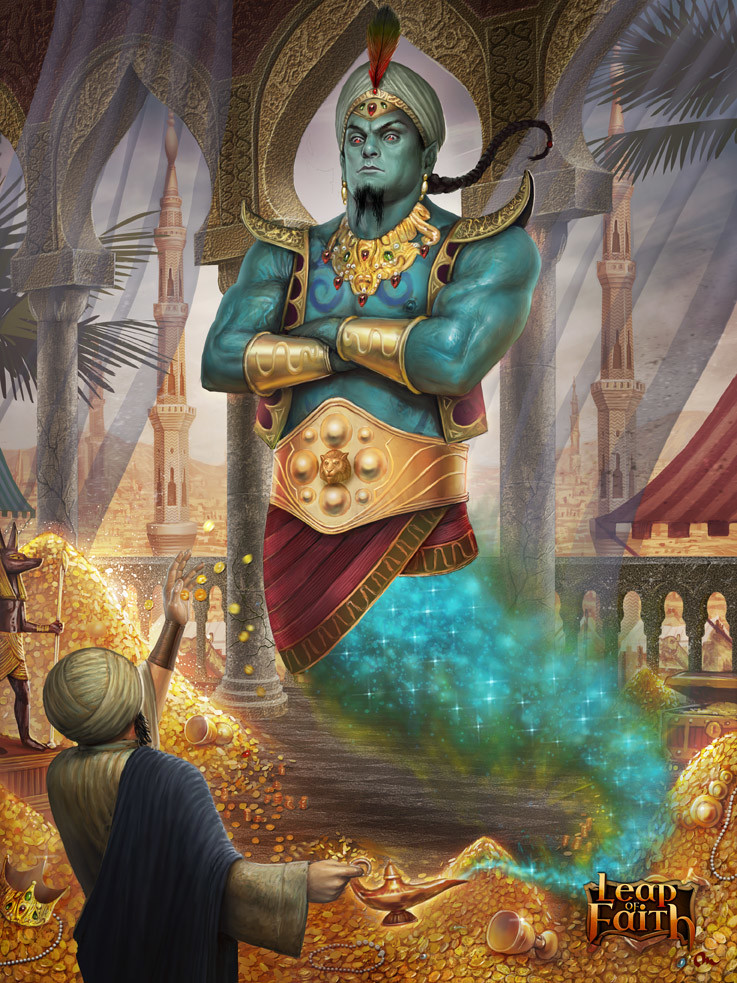 
"She said 'I want to be the most beautiful in all of the lands.' So I made her into a painting! Hah!"
— Azad the Mighty (Earth Genie) 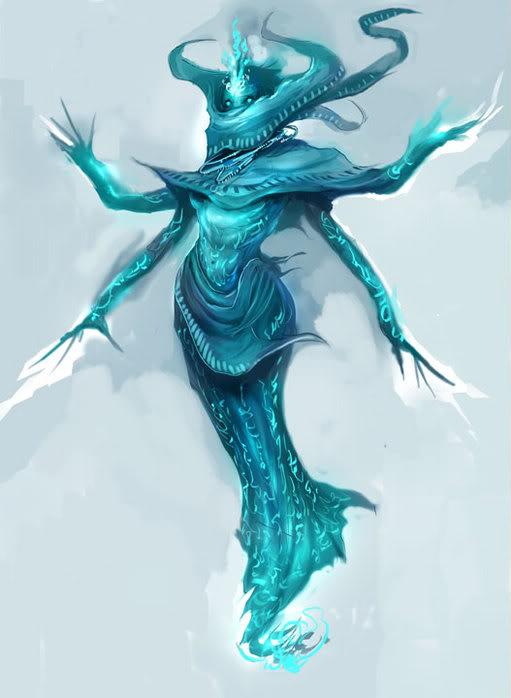 High Djinn of the Water Realm Indemeria the Effervescent, Ruler of the Tides, Grand Mistress of the Waves, The Whorl's Third Eye

by World of Warcraft
Species/Inhabitants 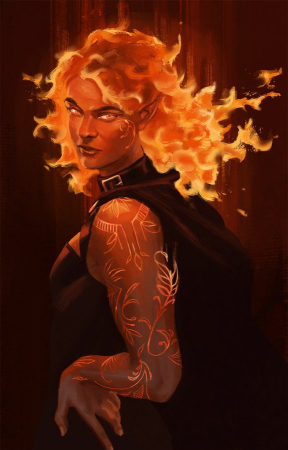 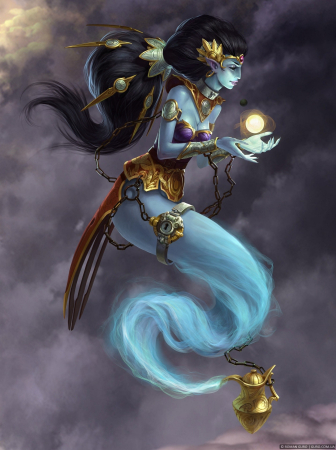 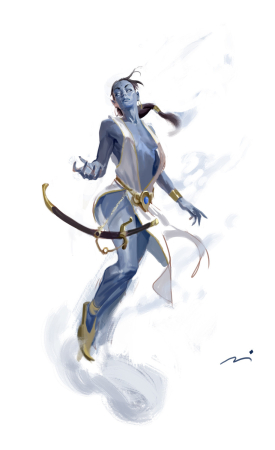 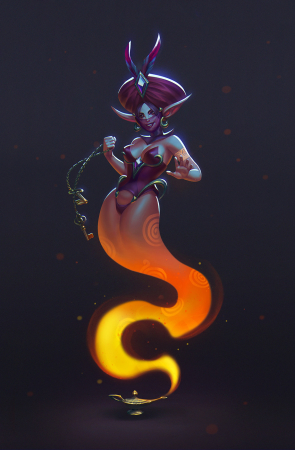 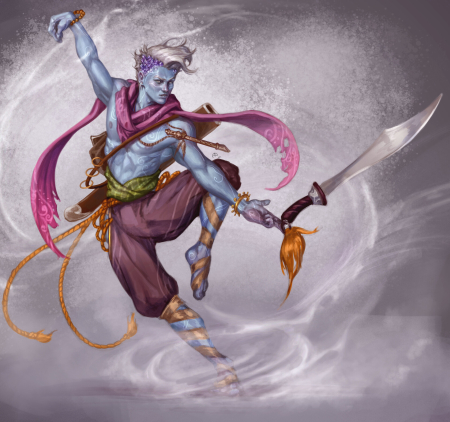 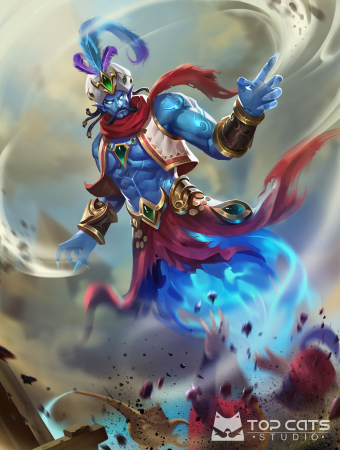 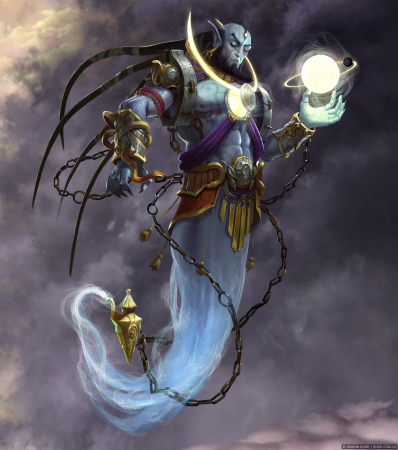 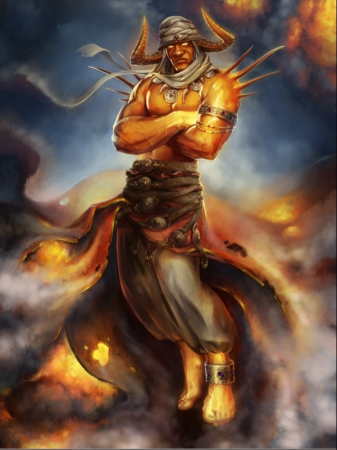