The Kirtaari of Kyrpet (“Dawn”) are a fascinating soft-bodied sophont species; a rather rare case and a significant object of observational interest to the interstellar scientific community. Dawn is one of the few known worlds in the galaxy that possess a sophont species that is still in its early civilizational development phase. Dawn is heavily remotely monitored by a subset of the Galactic Council on Planetary Ecological Management and the data is all public, with plenty of research papers already published on Dawnese evolution and sociology.

Given that their current niche favors more dexterous and mobile appendages (fine motor skills), large brain size (intelligence), and acute pattern recognition (navigation, among other things), scientists predict that the Kirtaari's evolutionary trajectory is most probably in favor of more complex brains, longer limbs, increased fine motor capacity, and better eyesight. Not to mention additional stamina is a great asset; younglings on the open sea must survive for weeks without food.

Kirtaari possess bilaterally symmetric ovoid bodies with four manipulatory tentacular arms, a flexible mouth-stalk that often is used as a fifth limb, and a pair of flexible eyestalks topped with compound eyes, as well as a large complement of facial whiskers to aid in tactile and chemical sensation. Sophontologists tend lump them into the Teuoid physiotype, though this is rather inaccurate considering their lack of radial symmetry. They are closer in form to the cephalopoid bodyplan.

Kirtaari are hermaphroditic and reproduce by a form of parthenogenesis; haploids are formed in special quill-like growths on the back where they are exposed to radiation from their parent sun that mutates the chromosomes so they are not identical to the parent. After self-germination, the quills detach and the fetus develops inside of it like an egg.

Due to the fact that the molecular structure of their genetic material is based on peptides rather than deoxyribose, making more resistant to radiation-based mutation and decomposition, Kirtaari evolution is a little slower than one might expect, but Dawnese life does evolve faster than most other life. Because mutations can often be harmful and even fatal, Dawnese animals produce vast numbers of haploids to increase the chances of beneficial mutation and the survival of offspring.

Kirtaari have an odd social structure somewhat similar to that of Dryads, having no real connection to genetic family but forming a tribal structure with other inhabitants of their island. Almost from hatching, the young Kirtaari are taught how to live off the ocean and how to sail. When Kirtaari younglings reach sexual maturity, they sail away from home to find a new atoll on which to live, most likely never to see their birth island or parent again. When a seafaring Kirtaari reaches land at last, the tribe native to that island will adopt the newcomer as a member of their tribe and bond with it. The strength of the tribal bond varies with each tribe; some are very close and operate like a family, others merely cooperate when necessary and leave each other alone otherwise.

Kirtaari are found exclusively on the planet Dawn, which they call Kyrpet. 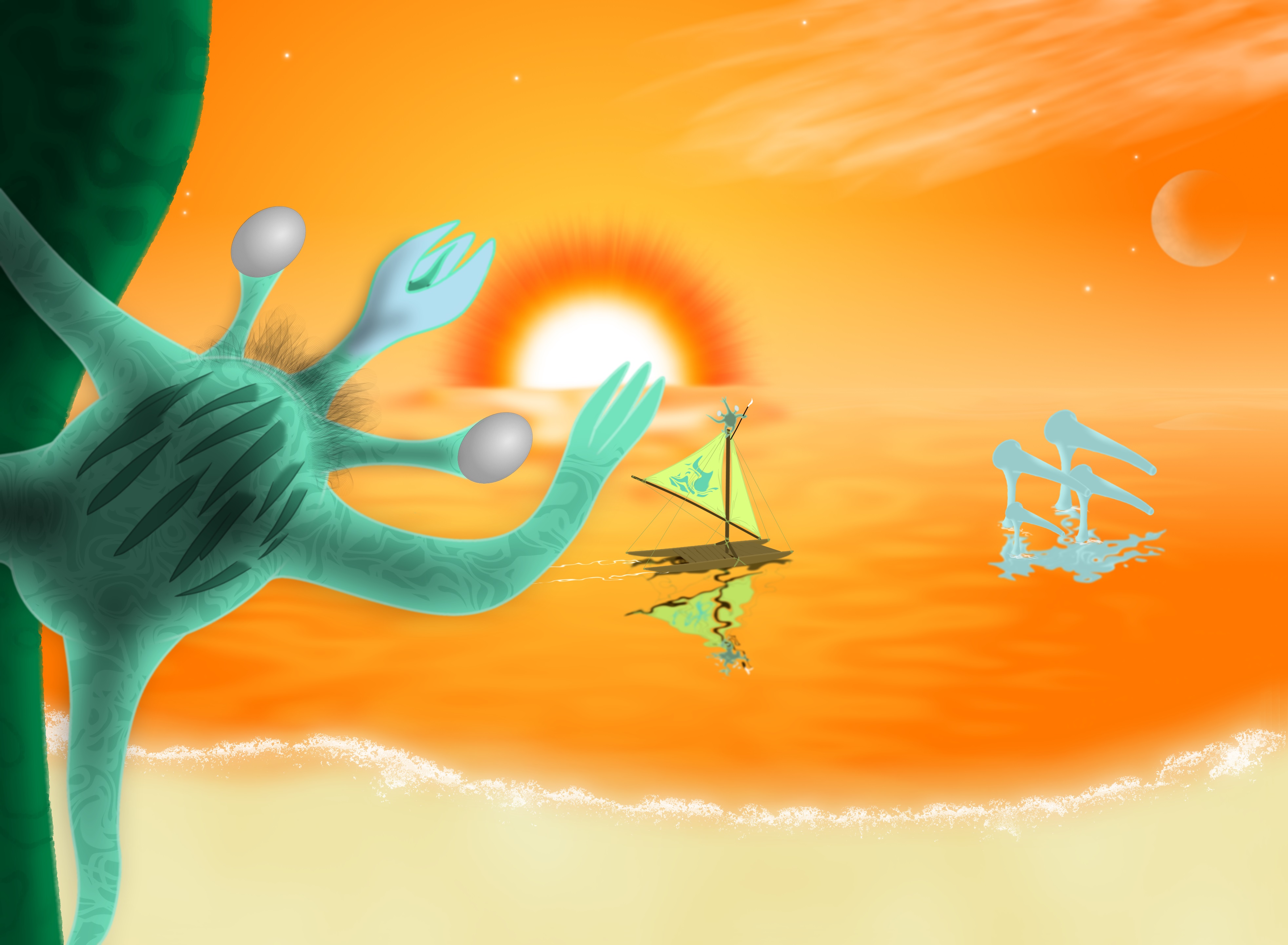 A young Kirtaari waves farewell to its parent as it sails away, at the mercy of the wind and waves until it finds new land.