Merfolk are a sapient species of liminal fay that have well-built and attractive humanoid upper bodies and lower halves consisting of the tail and fins of a great fish or whale. Their hair and skin span a wide range of hues, with merpeople in a given region closely resembling each other. Merfolk aren't as limited on land as some myths suggest; their tails will reform into legs once they leave the water (and, likewise, their legs will quickly reform into a tail should they ever enter water). Communities exist in the oceans and coastal reefs, mountain lakes, rivers, and even swampy wetlands.

From the waist up, a merfolk's body resembles that of a human's, even with skin that ranges from beige to brown and head of hair. A merfolk's lower body, however, is comprised of a tail and fins similar to that of a giant fish or cetacean. In addition parts of their skin near their fins like their shoulders, arms, lower back, and lower limbs (legs or tail) have the coloration of fish species. Although from a glance this aquatic skin may look like fish scales, the texture is smooth as hairless skin. Merfolk vary individually by color of their tail and fins, the former of which commonly matches the individual's hair color.   By the time they are adolescents, they are able to transform completely into a terrestrial humanoid form with fish patterned legs and feet to move on land. They also have fins on their arms, and the ends of their tails in the water, webbed fingers, and webbed toes on land.   Pelagos merfolk have patterns that mimic many varieties of marine fish. Selachi merfolk mimic the overall shape and coloration of various sharks, and possess sharp teeth in the front row that can regrow easily. Dromous merfolk have patterns that mimic freshwater fish and some amphibians.

Amphibious Skin: The skin on their lower limbs (legs or tail) and portions of their shoulders, arms, lower back, resemble the look and color of local fish species. Despite the scaly look, the texture is smooth as hairless skin and is similar to amphibians in that Merfolk can breathe through it when moist. It is also what merfolk use to breathe underwater in place of their lungs. This function is also present in their human looking skin but is less efficient. This special skin is also shed periodically more or less in one piece throughout their lives for new healthy skin underneath.   Slime Coat: A thin coating of slippery slime is produced by their skin to stay moist in order to breathe through their skin underwater and on land.   Merfolk Tail: In an aquatic environment, a merfolk's body below the waist mimics a fish's tail and fins or aquatic mammals flippers. Regardless, all merfolk tails swim by going up and down like marine mammals.   Fish/Cetacean Mimicry: Their amphibious skin also resembles the color and patterns of natural fish, dolphins, or whales in their native environment.   Pressure Resistance: The Merfolk are a hearty race, having adapted to the constant pressure that living underwater can bring, having great natural fortitude and stamina.   Swim bladder: While their skin extracts oxygen in the water, their lungs are filled with air to now help a merperson control their buoyancy, and thus to stay at the current water depth without having to waste energy in swimming.   Expert Swimmer: Because of their tail and webbed hands (and webbed feet on land and shallow waters), merfolk are naturally adept swimmers. Their tail is strong enough that it can propel one several meters out of the water for high leaps.   Euryhaline: Merfolk can adapt to water of various salt content like fresh, brackish or saltwater regardless of background although the adjustment period can vary between groups based on where they live.   Amphibious Adaptation: Merfolk from adolescence can take either their normal, fish-tailed form, or appear as a land humanoid with webbed feet. Transformation occurs when submerged in either water or air reflexively and is not under their conscious control. Apparently, it operates based on two biomagical hormones: one that is made in the presence of water to fuse the bones and muscles to make a tail and one in the absence of water that separates them to make legs. Merfolk slowly develop them throughout their lives then a huge amount during puberty. Interestingly, an obstruction on their lower body (like clothing) can prevent the change from happening.   Accelerated Regeneration Factor: Merfolk can passively regenerate wounds in a short time via biomagical reactions speeding up the process. The extent of this regeneration prevents the development of scar tissue and even regrow entire limbs within a few minutes to hours however these actions do not set any broken bones on its own. In addition, this magical trait is significantly slowed when the subject is increasingly exhausted or when exposed to substances that interfere with the process.   Agelessness: Merfolk lack measurable symptoms of aging due to their cells' high regenerative properties. As such merfolk do not weaken, slow down, or lose fertility with age giving them great longevity, potentially for centuries. However they are not deathless and will eventually fall due to mortal injury or disease beyond their regenerative capability.

Merfolk reproduce the same way as other humanoids, internal sexual fertilization with humanoid genitalia. In their aquatic forms, these organs are typically hidden in their bodies, unless they're sexually aroused. Once impregnated, a mermaid will gestate her baby for five months and return to the water to give live birth.

Fry: A newborn merfolk is born with the size and body of a large goldfish and a proportionate humanoid head. They are completely aquatic and breathe with gills on their fish body. In the first week, they lack a mouth and rely on fat stores until it develops and their body grows two flipper like arms.     Child: With their increase to the size of a human child, their upper body becomes more humanoid as they grow a chest and their flippers develop into arms with hands. Their gills become internal lungs and they can now breathe through their skin in water. Although they retain their fish like tail on land so they stay in the water.   Adolescent: Hormonal changes during puberty allow for their race's signature metamorphosis for the first time if they leave the water. In addition, their bodies take on the secondary sexual characteristics common to many humanoids during puberty.

Typical diets are composed of local fish and aquatic plants. They will also partake of other aquatic animals such as mollusks, shellfish, and water fowl. Brackish merfolk also partake of large insects, reptiles, and are more likely to eat foods closer to land. Marine merfolk have the advantage of hunting large mammals on occasion. Fruit and nuts that drift in the waters to propagate are a delicacy and are sometimes grown by experienced farmers.

Echolocation: Merfolk can use low or high pitched echoes to locate things far off in the water. Merfolk can also mimic the sonar frequencies to influence species that also use echolocation such as dolphins.   Electroception: Selachi merfolk are to passively sense the weak bioelectric fields generated by other animals with their electroreceptors called Ampullae of Lorenzini.

Mermaids far outnumber mermen. As such in merfolk culture, mermaids are expected to be the ones foraging and hunting for food. They also, by virtue of vastly overpopulating their male counterparts, tend to have more influence in merfolk society. Mermen, by contrast, tend to be "soldiers" to their "queens", and traditionally to protect their mates and children by guarding them, operate various tools and labor for them.

Merfolk tend to be promiscuous once they hit puberty, even outside of their own species. Most of this seems to be just for the sexual pleasure as opposed to reproduction since merfolk tend to not hybridize well. While promiscuous outside of their race and, in fact, known for their loose sexual attitudes, merfolk nevertheless often choose to mate for life with each other.

When couples marry, the man leaves his mother’s family and goes to live with the bride's family. Married men often have two surnames, their own and their wife’s, while women only ever have one. The duties of a husband are to be a partner and aid to his wife, including doing all the physical work that needs doing in the family group and also helping to raise their children.

Traditional merfolk tools are made from bone, discarded land glass, or the sharp teeth of sharks, but lacks most metals. These tools are often bound at one end with eel skin. Byssus or sea silk are strong fibers harvested from mollusks that are immune to water degradation and can be woven into fabrics to make clothing, rope, nets, and other tools.

Nudity is a non-issue for children and is also the case for nomadic and uncontacted clans and tribes. Although some merfolk lightly decorated themselves with shells, pearls or pigments, the concept of clothing was introduced from terrestrial races. Even for those who keep up an idea of modesty, being a female dominant society, bare feminine breasts and hips are not seen as taboo.   Freshwater merfolk are more likely to wear a type of clothing, partially for protection on land and partially to prevent tension/show status to more prudish races. If they can't obtain clothing material via trade they may weave a crude kind of fabric from aquatic plants like seagrass or common plants like hemp. Their clothing tends to be simple, loose and only cover the bare minimum like loincloths or short sarongs and tunics. On their own they are likely to forgo clothing entirely.   Marine merfolk tend to isolated in the oceans and thus even less likely to dress. Shells or pieces of coral with small holes in them might be made into necklaces the merpeople may wear around their necks and sometimes loop along their tails. A few might even make fabric from seaweed drying along the shoreline, called seaweed cloth, that is used for garments, rope, and even baskets.

As a merfolk ages, they are given a sort of tutelage. This tutelage consists of all the necessary skills to live in the harsh aquatic environment. They learn to hunt, communicate in their language and a set of other useful skills for survival. Due to encroachment of industrialized nations, a similar set up is made for merpeople who are training in a society that adopts specialization and division of labor.

The origins of merfolk likely lie in the chaos that was the Ghulat Wars. Now even before these events, there were aquatic fay living in various places, some humanoid, others different body shapes. However the combination of run off pollution from both sides of the conflict, corruption of environmental magic and plant life that kept it in check, and invoked geothermal activity that were raising ocean temperatures at an unnatural rate. This wasn't particularly great for landing creatures either and many varieties of people's had to find refugee from the destruction. The story goes that one group of elves were desperate enough to flee to a half-submerged caves in order to survive. Then aquatic humanoids like sirens and nixies taught them magic that allowed them to create fish like forms and eventually mated with them, leading to the creation of the merfolk we know today.

Whatever their origin, merfolk became one of the few surviving aquatic fay races in the aftermath of the Ghulat Wars. Most were nomadic groups simply hunting and gathering enough food and materials for subsistence. At the same time the land races were slowly rebuilding their environment, the oceanic merfolk were creating their own civilization, using coral reefs and submerged islands as a base. Some merfolk bands moved to inland water ways and settled in these bodies of water and wetlands. 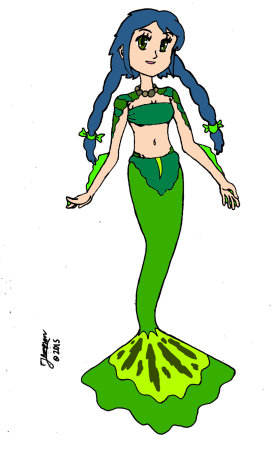 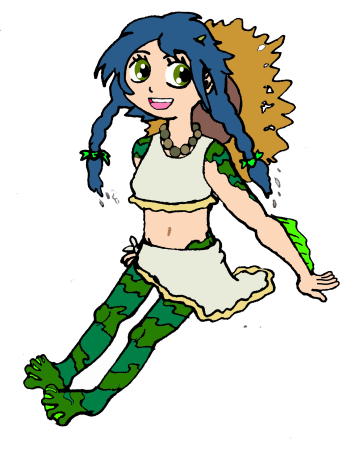