Born in chains and raised under unforgiving masters, the dragon that would be known as Orryn the Black never dreamed of freedom. Like his brothers and sisters he worked beside, he knew little beyond the merciless orders and magical shackles of his dwarven masters. The rumors of rebellion had not yet spread through the holds when a small group of unbound dragons and elven supporters killed his guards and broke his chains. Little did anyone know that this small act of liberation would be the beginning of a legend, and an end to centuries of enslavement.

THE ROAD TO FREEDOM

Like many of his kind, Orryn was born and raised into dwarven slavery. He never knew his parents, nor did he very much care. As an exceptionally large and strong dragon, he was tasked with assignments that often required heavy lifting. It wasn't a glamorous life by any means, but as long as he did his tasks as ordered, he went to sleep in a comfortable bed with food in his belly, and that was more than many dragons could claim.   Everything changed when his work camp came under assault. Orryn was shocked to see other dragons fighting his dwarven masters. These dragons were free of chains or shackles and bore both armor and weapons. Fighting beside them were a number of elves, also armored. Shouts rang through the air in a language he had never heard before, yet somehow understood as "Freedom for our dragon kin!" The concept of freedom was so unknown to Orryn that all he could do was stare in shock for several minutes after they broke his chains. Once their masters were defeated, Orryn and his fellow slaves were taken to a small, heavily-guarded elven city, where he learned of a city of dragons who, with the elves' aid, had finally risen up to free their enslaved brethren from the dwarves. Inspired by their actions to free him, Orryn quickly decided to join the fight. Within a year, a few acts of rebellion escalated into a full-blown war.

It was a few years into the war that Orryn made his first mark as a hero. Though his strength was already being talked about, until then he was just another soldier. He and his squad had been ordered to destroy a large but poorly-guarded slave camp and liberate the slaves being held there. The mission was going well until dwarven reinforcements arrived through one of the tunnels. Orryn's squad split up, one to meet and hold off the reinforcements and the other to continue freeing their bound kin. The battle was a blur for Orryn. Hours past as he fought, killing dwarf after dwarf while his comrades fell one after another.   Eventually, the other group came to assist, only to find Orryn was the only one still standing, somehow fighting off dozens of hardened dwarf warriors. Stunned and certain that more dwarves were on the way, they shouted to Orryn to retreat. With an angry roar, Orryn cut down the dwarven commander before turning to follow his kin. All along the way back to their hidden encampment, his squadmates pelted him with questions about how he managed to keep fighting on his own for so long. Orryn could only shrug, claiming he was just doing his duty to help his people. Rumors quickly spread about his amazing strength and fighting skill, and from then on he was far more than a soldier.

Orryn fought in many battles during the course of the war. While none were as significant his first huge success, his superior strength and skill only fueled the growing claims that he was a hero of dragonkind. He never once lost on the field of battle, even if he was the only one left standing, and many came to believe he was invincible. Dragons everywhere praised him, while dwarves labeled him as kill-on-sight. There were many attempts at assassination. Everywhere he went, people cheered him, and when he went to battle those with him knew they were going to win. And after every battle, Orryn had dozens of females clamoring for his attention.   As the war raged on, dragons and elves went so far as to claim that Orryn was the first dragon to be blessed by the gods since their damnation. What began as simple rumors quickly grew into war news, and then into almost fantastical tales of victory. Dragons chanted his name before battles, and some dwarves actually began to flee in fear before the fight even started. The dwarves tried to keep his legend from spreading through their holds, but too much fear among them and too much hope among their slaves kept the fire burning.   When the war finally ended and the dwarves agreed to free the rest of their slaves, the dragons clamored for Orryn to lead them. But Orryn had no ambitions toward power. He was a soldier, nothing more. With nothing to fight, he helped build settlements and defenses. But he quickly grew restless. One day, he simply disappeared, wandering into the wilderness. His final words were that he would return when his people had need of him.   No one knows what happened to Orryn. The common belief is that he eventually died alone somewhere. But there are rumors that he attained ascension and slumbers somewhere in the highest mountains, waiting for his people to need him again. 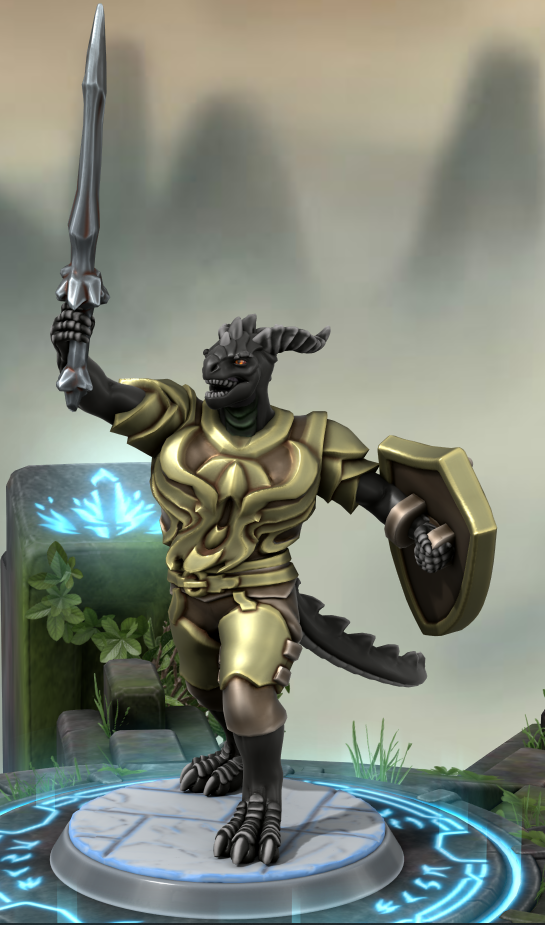 "By the gods, you're Orryn the Black!"

"That's what the dwarves call you. You're a hero!"

— Orryn discovering his nickname for the first time

Orryn's nickname wasn't given to him by his kin, but by his enemies. From an early age, his size and strength made him stand out, and he was raised for demanding physical labor. After he was freed and rumors began about his battle prowess, the dwarves came to identify him as durag, "the black one", as black was an exceptionally rare color for a dragon. Once his name became known as well, they called him Orryn the Black as a warning to any who were headed out to engage him in combat. The slaves who heard this began idolizing Orryn as some kind of immortal legend who struck fear into the hearts of even the cruelest dwarves.

A very classic, mythological hero's journey, complete with the ending of once returning when the need is great. Very well done! I am especially amused by the fact that he had no idea about his nickname until someone told him. :)

Nice! I especially like him refusing to become leader and instead helping with construction.