The Plant - a symbiotic way of living

In the south of Aleya, the year is dominated by a long dry period. For this reason, there are only a few plants here. The Earth Digger Cap, however, specializes in this condition. It has formed a symbiotic relationship with a medium-sized mammal, the Earth Digger, which plows the dry soil with its clawed talons, seeking out insects, worms, and water, which it captures with its 2 narrow long tongues.   The Earth Digger Cap germinates on the digger's back and anchors itself with the roots under its partner's leathery and insensitive epidermis. The fine roots enter the bloodstream, providing nutrients and water for the plant. At the same time, the plant strengthens the host's immune system by releasing antiseptic metabolic products that kill bacteria and fungal spores.   The plant forms up to 3 umbrella-shaped caps on a fleshy honeycomb-like structured stem with which it draws energy from the sun and at the same time provides shade for the Earth Digger. In addition, with its almost white surface, the plant repels predators of the Digger, which are blinded by the reflected sunlight. Additionally, the plants on the back make the animal appear larger and more threatening.

Once a year, at the beginning of the rainy season, the Earth Diggers meet for mating at one of the few water holes. This period is also used by the Cap to reproduce. At the same time, the two-year-old leaf caps of the plant form tiny blossoms on the upper side which colors the cap red and emit a scent that attracts insects, which can be found in abundance at the waterholes. These pollinate the plants, whose caps then curl up to form the seeds. After only a few days, the capsules burst, spitting out small flying seeds. These are then carried by the wind to (hopefully) an Earth Digger, where they can sprout.

The nomadic people of this area benefit from these creatures in several ways: besides the tasty meat of the animals, they also use them to find water under the ground. In addition, the plant stores a considerable amount of water in its stem, which can be harvested and chewed to obtain the precious wet.
Short facts:
Biennial herbaceous plant
Habitat: South of Aleya (Nazar, New-Roshar)
Height of growth: 60-80cm (23-31 inches)
Diameter of the cap: up to 20cm (8 inches)
Stem: thickness up to 2cm (0,8 inches) 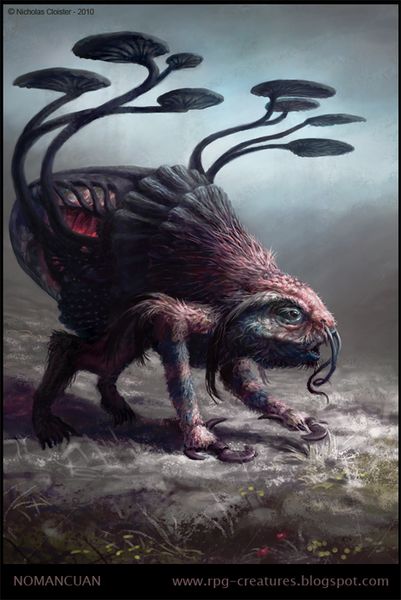 I love symbiotes and the image you've found on the side panel there is perfect; the logic you've constructed for their relationship is great. Really cool plant :D

Thanks for the nice comment:D I hope to write more of my world Aleya in English in the future. Most of it I have only in German here or in my head.

Lucky for us, Google Translate isn't too bad.. Most of the time. :D

This is a really nice plant! I love the symbiotic relationship with the Earth digger and how you've managed to make them as useful for each other.   Do you have an average and max size for the cap? Can it grow to be maybe not to big since it would be limited in the amount of nutrient it can get, but too cumbersome for the Earth Digger?   What happens if the cap is damaged? Do the Earth Digger bleed out too?   And like Qurilion said, this is a really nice picture that you've found to go with it, it really enhance the article :D

Thank you!:) I added the info about the size of the plant, thanks for the tip! The plants are not too big and do not hinder the Earth Digger.   The animal feels nothing when the plant is damaged unless you tear it out of the skin.   And thanks again, for pictures that I like I try to think about a story that could fit - here it worked really well:)

Such a nice couple of creatures! I really like what you did with them, the white surface of the plant blinding other creatures was a really fun twist. That made me wonder though, what uses has the plant for the sunlight it is absorbing? Does it do photosynthesis? And if so, how does it do it? (your world may not have chlorophyll, but if it does, normally plants need pigments like chlorophyll, which is green, to carry on photosynthesis).   I think your use of the word "compound" in the "Uses" section sounds a tad odd. I think something like "these creatures" may sound better.   The image was really helpful in bringing the creature to life. Did the image inspire you, or did you have to go searching for an image that matched what you had in your head? I also really enjoyed the plant uses, particularly the water storage. I can imagine how in an area like this, capturing these creatures can be massive, as you obtain both food and water!

Thanks for your comment, it is great how many ideas I get from them:D   There is already photosynthesis in my world, but this plant does not use it. Due to the extreme solar radiation in this area, the plant relies completely on nutrition via the host and protects itself and the animal from the sun with the white surface.   Compound: in German, it makes more sense, probably it doesn't work so well in English, I will change it, thanks:)   The picture was the inspiration. When I find something I like, I think about how it could fit into my world and why it looks like that or what story is behind it.

Neat, thanks for letting me know. I'm glad the comment was useful :)

Really nice article! The way that both the earth digger and the cap need eacother was quite original. I really liked the idea of how the cap is not just a parasite but actually boost the immune system of the digger. And of course great image that goes along with it :)   It was also a nice idea to make both the cap and the digger season synch with eacothers. Makes sense that this is the most likely time to find new diggers to grow on.

Thank you!:) I thought it will be a good idea to boost the symbiotic way of living beyond providing shade and help against predators. And yes, the plant needed to synch its reproduction time with its host to live on:)

Symbiotic shrooms! Those sound neat, and real useful to hunt!

Thank you for your comment!:) The plant builds caps, but they are only the shape of the leaves - so it is not a shroom:))

Hey Syrox!   I love the picture you chose for your plant as well as based your plant's behaviour on its symbiotic relationship with a mythical creature. Excellent work!

I love symbiotic living creatures, and the picture worked so well for this:)) Thank you!:D