An intelligent, agile and funny bird species that live in dense forests, jumping from tree to tree like a monkey.

Jumping from tree to tree with an immense speed, the bird looks more like a small squirrel caving way through the forest, but this display can be deceiving. The jumping gentleman is a beautiful bird, and though it doesn't make much use of its wings, it is still capable of flying short distances.

This bird is like no other found on this continent, and thus, a lot of research and observation has gone into them. Firstly, they typically eat softer fruits and berries, but their beak resembles a lot those birds that go for nuts, insects, and other smaller foods. With a strong and pointy beak, they are able to puncture through hard materials, like hard fruits and even nuts.

Beautiful shining colours covers most of the feathers; teal, green and blue, shining ever so brightly in the sunlight. The Fenriin is a wonderful sight to see, as it shines in the trees above you.

Feathers protrude from the back of their heads, as thin as a flower stalk, it goes almost 10 cm out and ends in a small drop-shaped feather with golden colours.   These same type of feathers are found around the tailfeathers, having a length of about 15-20 cm with the same golden shiny colouration. These feathers have no critical function and are mostly for show - any gentleman (or woman) would like to look good! 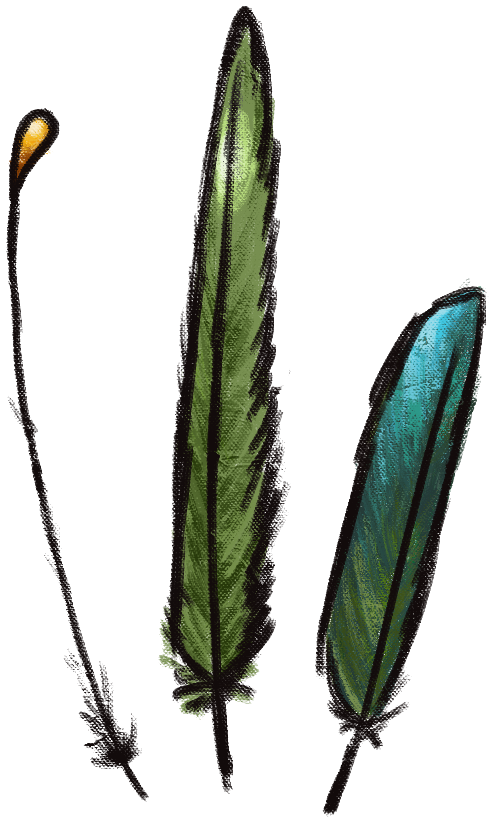 by CatRobi
It is important to mention that there is no distinct difference between genders and their feathers/looks.   The only reliable way of distinguishing between a male and female Fenriin is their beaks; the female's beak tends to be duller in colour, missing the light yellow at the very tip.   The size can vary between the genders, but this isn't an obvious way to distinguish them, as both genders have many different sizes.
It has gotten its nickname, the jumping gentleman, both for its incredible jumping skills, but also for the very distinct colouration of its feathers around the beak. A small curl goes from the beak and along the cheek, making a shape of a magnificent moustache. This is definitely the most gentleman-looking bird known, and that is how it got the name.

Fruit, berries and nuts are the preferred food for the Fenrrins, and rightly so, as it is a very abundant resource in the valleys.

They have been observed to be somewhat picky eaters, mostly going for the sweeter fruits and berries.

And the more tasteless fruits found in the forest are walked (or jumped) by without a second glance. This way of picky eating has shaped the nature around them in unexpected ways (see habitat section). Insects, leaves and flowers get consumed as well, but only if no other option is available in the nearby vicinity.   No tree is safe from a hungry gentleman bird, as most branches and treetops can be reached with only a couple of jumps and glides. This is also how the Fenriin is able to be picky in the first place, there are lots to chose between.

Dense forests, humid weather, and warm temperatures - The Luscious Valleys is the Fenriin homeland. Trees and vines weaving and intertwining with each other, making it hard to get an easy passage through the forest if you are a creature with wings - but not impossible. The jumping gentleman gets the first part of their name from their incredible skills of jumping, and thus making the entirety of the forest accessible.   Fenriin and their picky eating behaviours play a big role in the forests around Weluk'ta Highlands. Fruit, nuts and berries get spread around because of this bird and their eating patterns. Most of the animals that live on the forest floor can't get to the sweet goodies of the high trees and therefore rely on the gentleman to drop some fruit instead. This is turn makes the odds of spreading the seeds a lot higher and this is how most of the fruits and berries have been spread throughout most of the forests around the highlands and the luscious valleys. 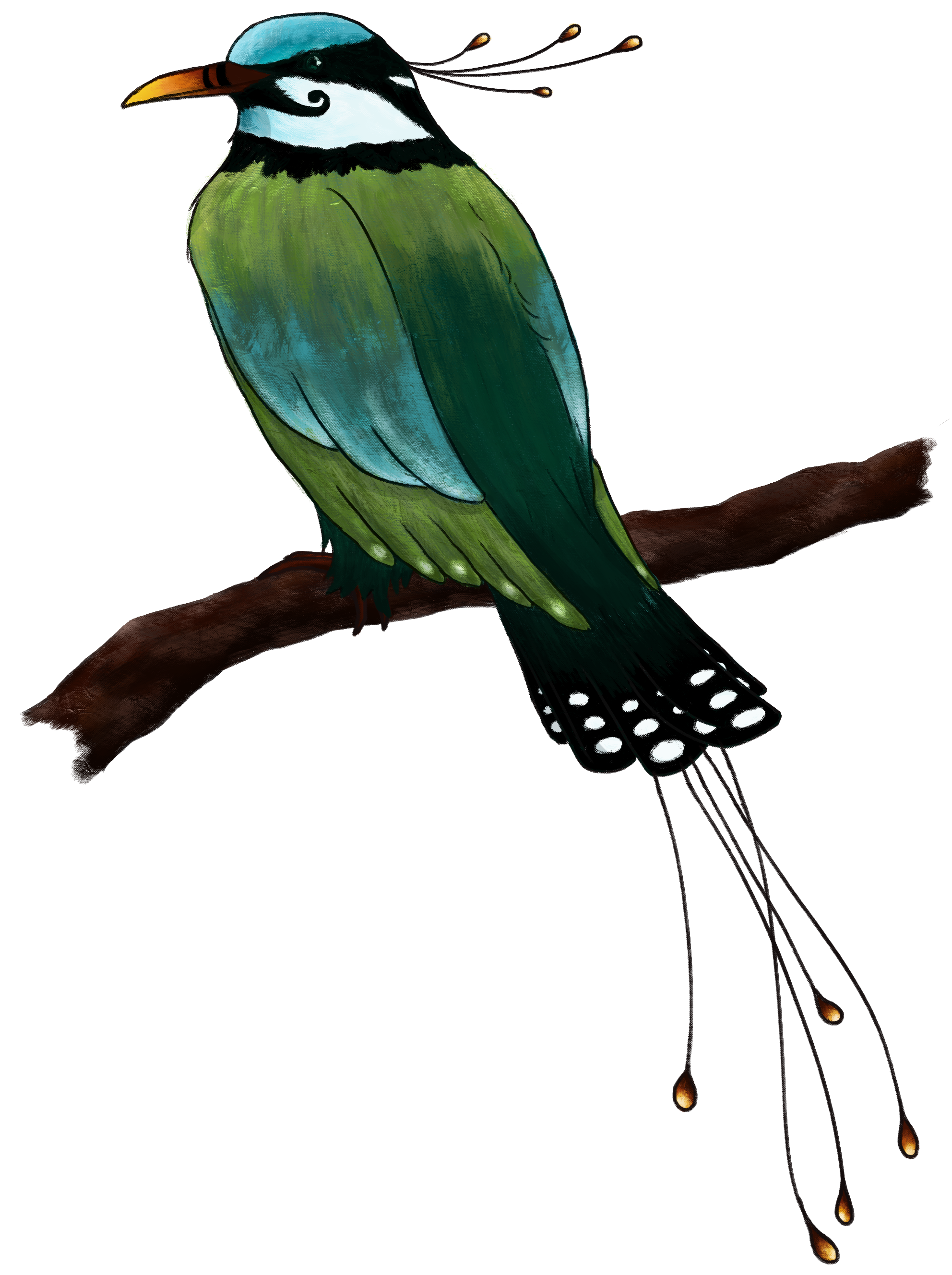 Fully grown Fenriins are about 20-30 cm tall (without tail).

An easy to recognize popping song emanates from the gentleman. This is the most common call, almost making a song beat without the usual song along with it.

Fenriins don't have a specific song they always sing, but more like a lot of different snippets they mash together as they like, making for interesting songs and "stories".

The northern and central parts of Seiwania - mostly in the forests of the The Luscious Valleys and forests surrounding the Weluk'ta Highlands.

With such a long life, it is important to have loved ones at your side. The Fenriin families usually stay together all of their life, making their families a small flock that travels together.   They meet and socialize with other flocks often, which is also how the young ones meet their potential life-partners. Family is one of the most important parts of the gentleman's life, and there doesn't seem to be any type of hierarchy in the flocks; everyone is expected to help out to make sure the entire family is all right.   To make sure the young ones in the flocks learns the importance of teamwork between everyone, the elders assign small tasks to them, so they have a job to fulfil which makes them feel like an important link in the chain. It has been observed numerous times, that the young get distracted and end up plying, making trouble here and there and generally annoying their siblings. And the funniest thing is, that the elders join in on the fun and shenanigans so often, it is almost expected.

The most popular game between any Fenriin is "catch" - they can't get enough of this game. With their agile movements and fast jumps, playtime looks almost panicked and frantic, but with small squeaks of joy is heard throughout the forest during playtime which ensures everyone there is no danger.   With such an intelligent bird, games are to be expected, but researchers have observed pranks going around in the flocks. Typically small pranks like waking up sleeping birds with a shove - sometimes even by intentionally dropping a piece of fruit on them - and other pranks like jumping up from behind a tree branch scaring the other bird; it is extremely funny and entertaining to watch.
Fauna
Cover image: by CatRobi

Haha! BIRB! Thanks for reading it Cato <3 Hope you are doing well c:

That's a nice cute bird, though there were some a few of its biology aspects did not make a lot of sense. Perhaps it'd be interesting to explain the what drives of some of the differences: (for example the beak or the lack of differences in colouration).   I also loved the details about their play <3

Thank you so much for reading it Mgatta! I can see what you mean, and I might need to polish the biology parts - I'm not too good at figure stuff like that out, so I appreciate your comment!   Yeah, I want to see them play after I wrote about that haha :D

This is such a pretty article - and bird! :) I love that it jumps from tree to tree and looks like it has a moustache. I really love the descriptions of its behaviour too. <3

"With such a long life, it is important to have loved ones at your side. The Fenriin families usually stay together all of their life, making their families a small flock that travels together."   This is such a beautiful image. Fantastic article - beautifully written with stunning artwork.

Thank you so much! That means a lot Brinsmead <3

Bird!! It has so much personality to it, I really enjoyed reading through this article.

Aw thank you Badger! <3 I'm happy you like the birb, and that you read my article ^^