The Point is the official currency used within the territory controlled by the Eurekan Empire. They are small, pressed, pieces of clay used in transactions within the Empire and even outside of it. Travelling Caravans have brought the use of the currency even in limited amounts all across Acate's landmasses.

When Keiman City was founded, Marielle became tired of the townsfolk using a non-standardised bartering system. She devised a method of creating a currency that couldn't be easily forged. Marielle decided (with the help of her closest wizards) to develop a mechanical and magical heat press that would manufacture the coins themselves.

These first coins were irregular in shape compared to their modern counterparts, but over time Marielle and her wizards refined the presses to make more perfect designs. The first coins had no markings other than the eyes stamped into each of them, but over time Marielle had new coins commissioned so that they became harder to copy. The most recently made coins are made from a special clay that has had all the thaumite removed from them. More illustrious businesses and wizard testing facilities have thaumite measuring devices to tell if the coin is legitimate or not.

by Drake
Points are the lowest denomination of the currency, and what the currency is named after. Points are forcibly mandated to be the price of a one pound load of bread. They are triangular in shape, have a square hole in the middle, and feature a large, prominent red eye at the top. Two ornate spades point towards the other two corners of the coin. Points are red, and their universal symbol is the Delta (Δ) symbol.

by Drake
Tiles are the next denomination of coin, are orange and square, and have a slight raised lip around the outside. A small, square hole appears in each corner, and in the middle is a pentagonal hole. Two suns are at two opposite corners of the tile, in reference to the binary stars of the Zeta solar system. Two angular arrows are also seen with three circles around them, in reference to Acate's three moons. Tiles are worth 5 points, and it's symbol is the non-italic octothorpe (#).

by Drake
Palms are five-sided coins that are yellow in colour. They also have an eye on the lower right hand corner, as well as many more esoteric symbols pressed into them. They have a small diamond-shaped hole in the top and a larger hexagonal shaped hole in their center. Some people have taken Palms and placed a magnifying glass piece in its central hole and use it as a pocket magnifier, but the practice has fallen out of common use. Palms are worth 10 Points, and their symbol is the open e (ɛ).

by Drake
Combs are green, six-sided coins with two circular holes in the top and bottoms and a diamond-shaped hole in the centre. It, like the Tile, has a raised outer ridge and an eye in the lower right hand corner. Combs are commonly seen as a 12 hour's day pay of fine artistry, paid for by business owners who have entertainers or by the rich folk who purchase paintings or sculptures. Combs are worth 25 points and their symbol is the Cyrillic letter zhe (ж).

by Drake
Rounds are the highest denomination and quite rare to see among the commonfolk. They're most commonly known for being the price wizards-to-be pay for entry into wizarding exams to get their magic licenses. These coins are round and indigo in colour and have notches around their rims. They have an eye etched into one of their sides and are smoother than the other coins due to their clear coat of a kind of lacquer. They have a star-shaped hole in their centre with five diamond-shaped holes around it. Rounds are worth 100 Points and their symbols are either the five pointed star (☆) or a circle with a dot inside (⨀). Stars are more commonly used by the common folk, while the circle symbol is more often used by those in the wizarding profession and related businesses.

Points revolutionised the economy of Keiman City tremendously by allowing poor persons to earn a simple wage and be able to afford basic sustenance. By basing the economy around manufacturing (as bread isn't easy to make for a common person or in small batches), Marielle flicked the switch from a farming-based barter economy into a society that valued skilled and educated labour.

Transactions became leagues easier to perform, no longer having to drag around bags of produce or risk damaging delicate art pieces. People were now able to trade basic things somewhat easily. Each Round was said to be equal to five grams of unrefined thaumite, giving thaumite and Points a set value. People could turn in thaumite to the Eurekan Government in return for Rounds, making Eureka much more powerful in the process and giving the population a means of gaining riches besides hard labour.

Poor persons often treat the currency with a lot of respect and care, as its lightness and small size makes them easy to lose. They often tie them around their hands or make them into easily removed jewellery so they can't be pickpocketed off of them. Necklaces are incredibly common, with a simple hook clasp so it can be taken off to pay for things or add more coins.

People tend to associate the clacking of the clay pieces with wealth, and percussion instruments have been made to replicate the sound so it can be added to music. Hearing a Point drop on a hard floor is akin to hearing a copper piece fall in the Ortheian Kingdom, drawing attention to all who hear it.

Older Points have been known to break, and have become known as a part of unofficial currency called Shards. Shards can be any piece 1/3rd the size of any Point currency or larger, and is worth half a Point. A slash ( / or \ ) is its unofficial symbol. 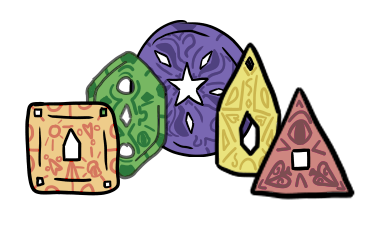 Rounds and Points are often the only symbols shown on a total price, and they are usually rounded to end in 0s or 5s to help the customer!

In this way, it's common to see prices like 2☆50Δ or 1⨀25Δ written on expensive items or at the end of receipts. Singular items might be priced like 2#, 7ɛ, or 1ж.

It's gotten bad, I'll tell ya. Poor keep getting poorer, they say. Derek got hit by a Point arrowhead made by one of those in the Stockades. They'd rather kill us than eat! Quite sad circumstances, that.
— Keiman City Guard


Remove these ads. Join the Worldbuilders Guild
Eureka and the Eurekan Empire