The Stormrider Regatta is the biggest maritime event in the whole world. Hosted every year by the Ondins, it is a maritime race that does not involve boats.

The legends says that the first Stormrider Regatta was the result of a challenge sent by Serene, an ondine, to Maelstraumen god of the seas.
See the legend of Serene's curse.   Now young men and women comes from different countries to participate in the Stormrider Regatta for wealth, power, absolution, prestige or just to challenge themselves.
Apart from the ondins, no other race can currently claim to have ever won the regatta. This fact only should discourage the most reckless, but truth is that each year an increase in norskans, ordeides, ashintais, izmadins and amithaels participants is observed. It appears that being the first non ondin to win the race is a prestige that every adventurer would like to hold.
Because in the end, the regatta is a defy to Maelstraumen, to show him that mortals can defy the power of a god.

Rules of the regatta

The participants have to race around the biggest Ondin island, Watakaruhei.
In order to win, participant must leave the hulk of the main harbor, swim around the island and clim back on the same hulk, as a result, both the starting and finishing point are at the exact same place.
The race happens on a different date each year as it is always during the first storm of the season.

Each year, the same strategies are used by people in order to win the race. Amongst all of these strategies, we can distinguish types of riders.

Waveriders mount animals that stay on the surface and are subject to waves. They mainly use giant turtles that floats easily. Waveriders main problem during the race is the distance of the coast they have to stay in, in order to be fast enough and arrive safely. Too close to the coast and the waves will be high and harsh. Too far from the coast and they risk drifting, losing time and direction. 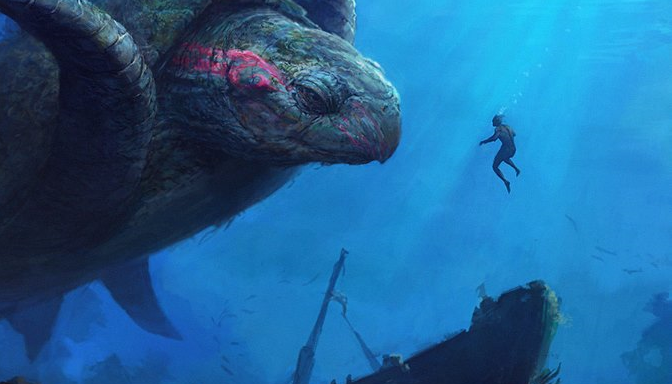 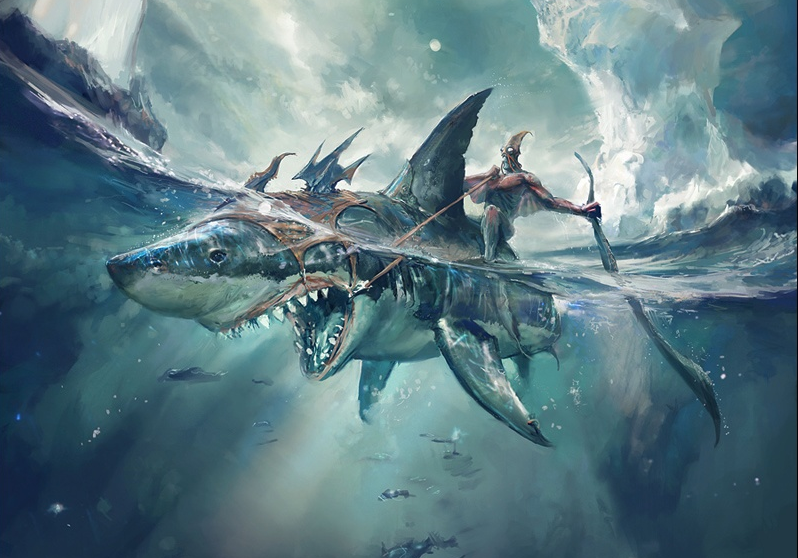 Depthriders mount animals that dives and can stay longer underwater. They often use sharks, dolphin or other aquatic mammal big enough for transportation. Depthriders need to often reach back to the surface in order for the rider to breath. Dephriding during the storm is one of the safest method to finish the race but not the fastest as the strong ocean currents which are even stronger during the storm goes against the direction of the race.
---------

Skyriders are the most impressive of all riders, they usually mount giant flying manta rays that jump between huge walls of water during the storm before diving in the middle of the wave only to reappear on the other side. Riders need to be well hung to their mount as they are not only subject to the waves but also to the hurricane squalls. If they happen to fall from their mount, they risk to lose consciousness when hitting the water with their head. 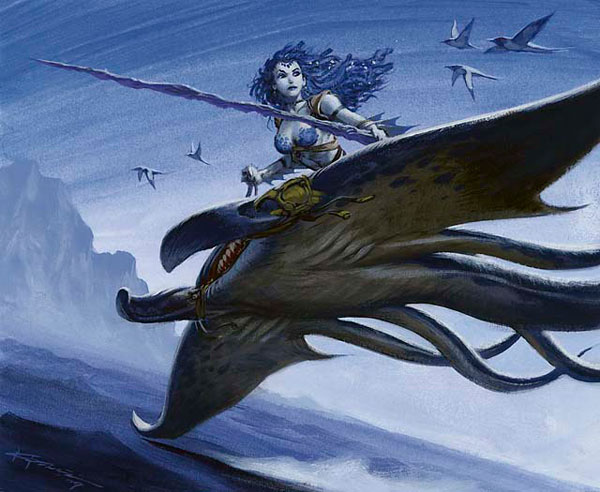 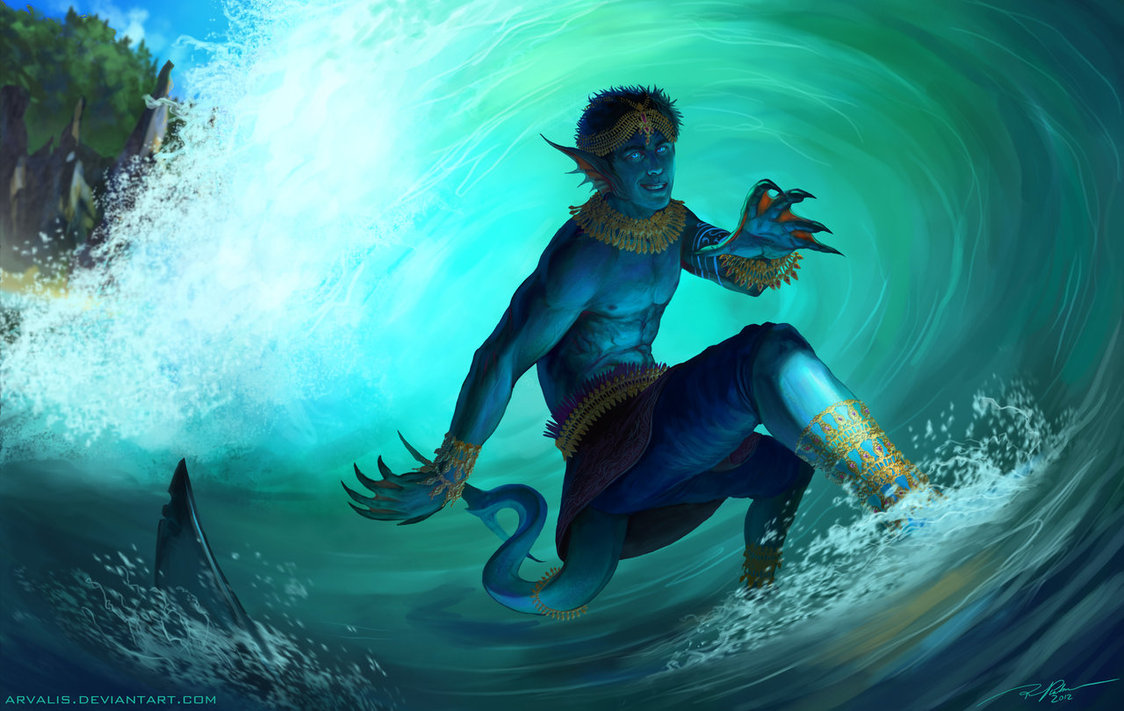 Surfers use the wave pipelines to slide between the waves and avoid the strong winds. It is a fast way of transportation but really risky for multiple reasons. It is really close to the coastline which makes surfers face strong waves that will break their necks and wash them ashores if they lose balance. Surfers are also subject to sea monsters attacks which can become pretty common during a storm.
--------

Swimmers are not really impressive in their style, but it is the most difficult way of racing during the Stormrider Regatta. Many Ondins decided to swim to prove themselves, conquer the heart of their sweetheart or simply to defy the ocean. On the masses who tried, only a handful survived and we only count one victor by swimming. 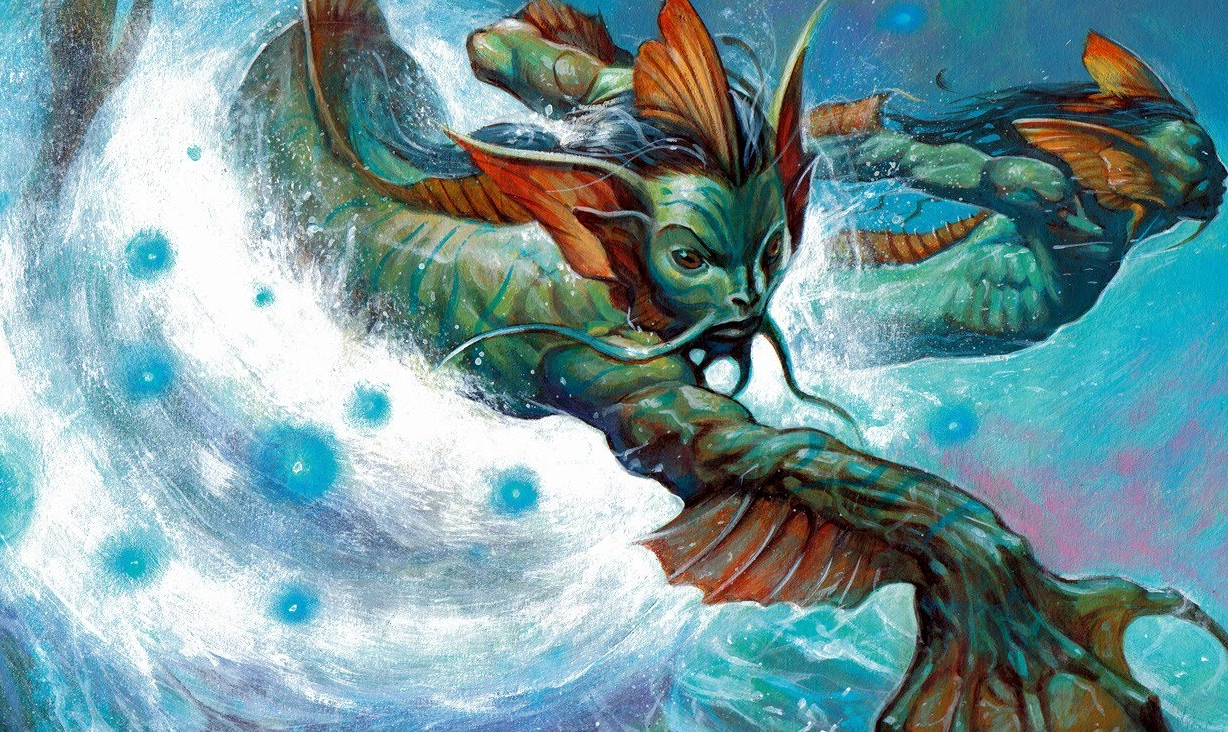 Witnessing the regatta and the wrath of the ocean is not an easy thing. Due to the strong gusts of wind, the heavy rain and the rising water, it is really dangerous to stay on the coastline. Some vista are famous for being the best places to observe some parts of the regatta, a pass between reefs that every participant will cross in order to gain time, a cliff that gives bird's eye view on a section of the race, the starting and finishing line.
Even in this conditions, ondins mass themselves on the coastline during the event in order to have the privilege to see the stormriders showing to the ocean's wrath who is the strongest of them.
Many have witnessed the death of a rider, but there is no shame in dying like this. In ondin culture, dying at sea means joining the domains of Maelstraumen forever. Meeting back old friends, family and loved ones. It is an honor and every witness of the regatta knows that by being defeated, the stormriders receive an invitation from Maelstraumen to join him in his domain. An offer they can't refuse...

In the past, stormriders have attempted to cheat. The first of them thought he was smart and went off in the high sea right after the start in order to not be seen, waited, then came back to the husk pretending he had finished the lap.
Call it immense misfortune or maybe a sign from the divine, waiting at the finishing line, a powerful wizard was present. The wizard was a foreigner, his magic perception was exceptional, he was able to feel living beings in an unseemly radius. His gift allowed him to understand what the treacherous stormrider did. Unfamiliar with the Stormrider Regatta tradition, he politely asked his hosts what was the event about and if it only consisted in staying offshore during the hurricane before coming back to the hulk. Maybe he was being candid, or purposedly scoffer. No one knows.
That day, two decisions were taken to modify the rules of the event.
First, cheating would be punished by death, and has a cheater was uncovered, he became the first stormrider to be offered to Maelstraumen directly as a sacrifice for his heresy.
Second, the organizers of the event would have to nominate Punkbusters. They are mages acting as referees during the race, placed at good range all along the island coastline, they would monitor the regatta using magic perception and report any suspicious behaviour.
Since then, no cheater has been unpunished.

Any participant that fully accomplished the Stormrider Regatta is rewarded by being granted the title of honorary ondin which provide the right to live amongst them on their islands if they wish to.
When they visit any island on the ondin territory, honorary ondins are automatically considered as a member of the main clan of the island, granting them equal rights and treatments. This basically means that an honorary ondin is automatically a public figure of the island he or she is currently on, a noble in more human terms.
And finally, they are absolved of any crime they committed on the archipelago unless it was a crime of treason against the royal family.
The winner of the race also receive a royal pardon even for crimes against the royal family and treason, a chest full of the most precious pearl of the Archipelago, the crystal pearls. Finally, the winner receive the status of royalty until the next Stormrider Regatta, granting the right to live in the palace and living on the countries public funds.

Famous winner of the regatta

Very Nice Article.. Love the pictures the layout is very good as well !

A lovely breakdown of the events. I'd like to hear more about the reward for victory, the stakes of the races, and what it's like to be a spectator though! What sort of esteem does victory come with?

Masterfully done, the breakdown of the players and the CSS really make this article shine. I would like to hear more about the stakes however!

What do you exactly mean by stakes, I''m not sure I fully understand the meaning :)

This is a very nice article. The colors you use in the article and the image are very consistent and that kind of thing has a lot of eye appeal. Great job! The lore is very well written with no errors that jump out at me.

This is fantastic dude!

Thanks! I appreciate it!