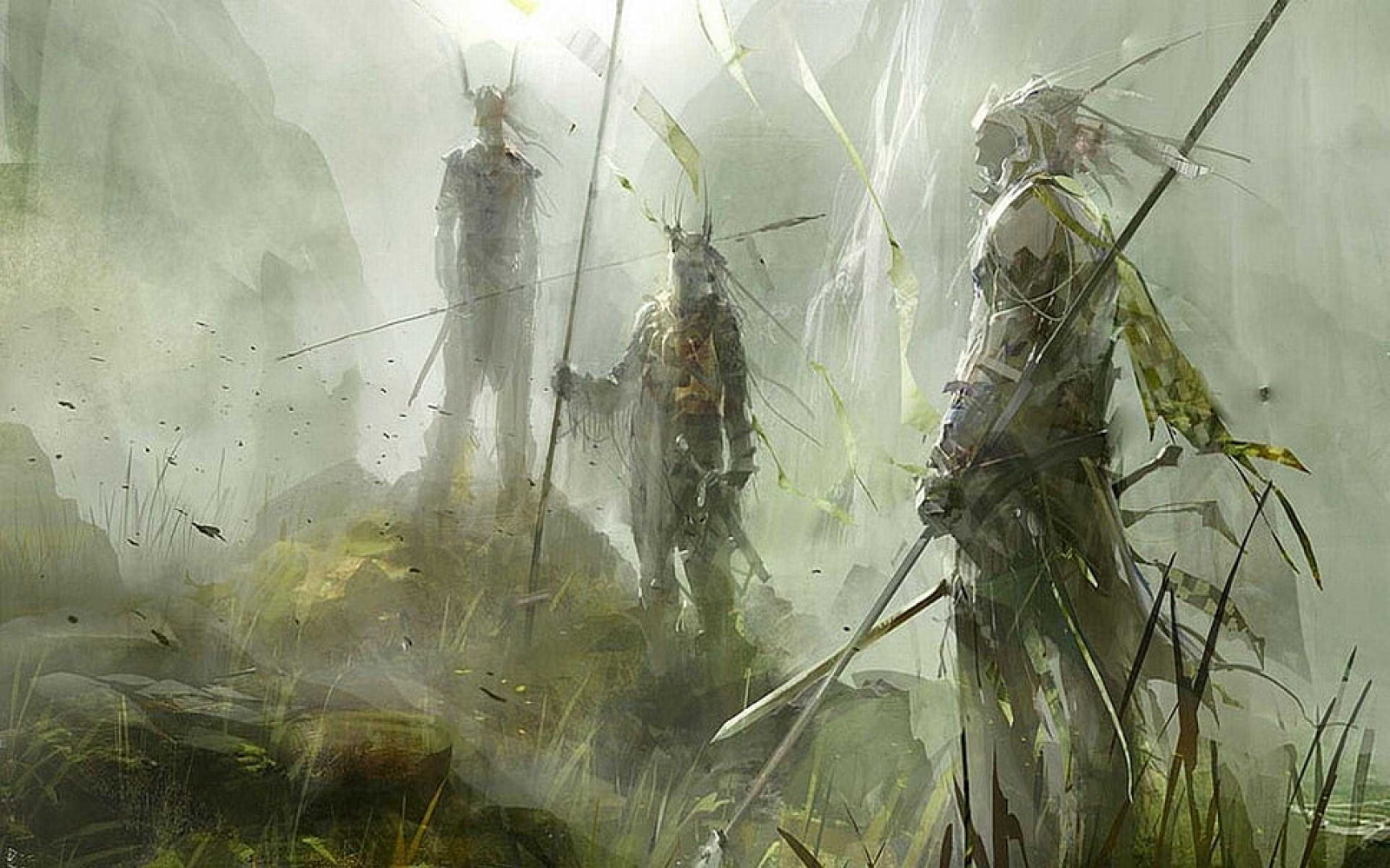 Temoi - Those Bound by the Chain

You would do well to doubt the words of the Teluani. My people are an honorable kind. We can be your truest friend or worst enemy. It all depends on you.
— Ndwaro, King of Umfozoli

"Last but certainly not least of southern folk, are the Temoi. A proud people with a history as ancient as that of any other. Their story is one of suffering and oppression, one of constant battle, vengeance, and forgiveness. It is the third key piece to understanding the way of the Far South." 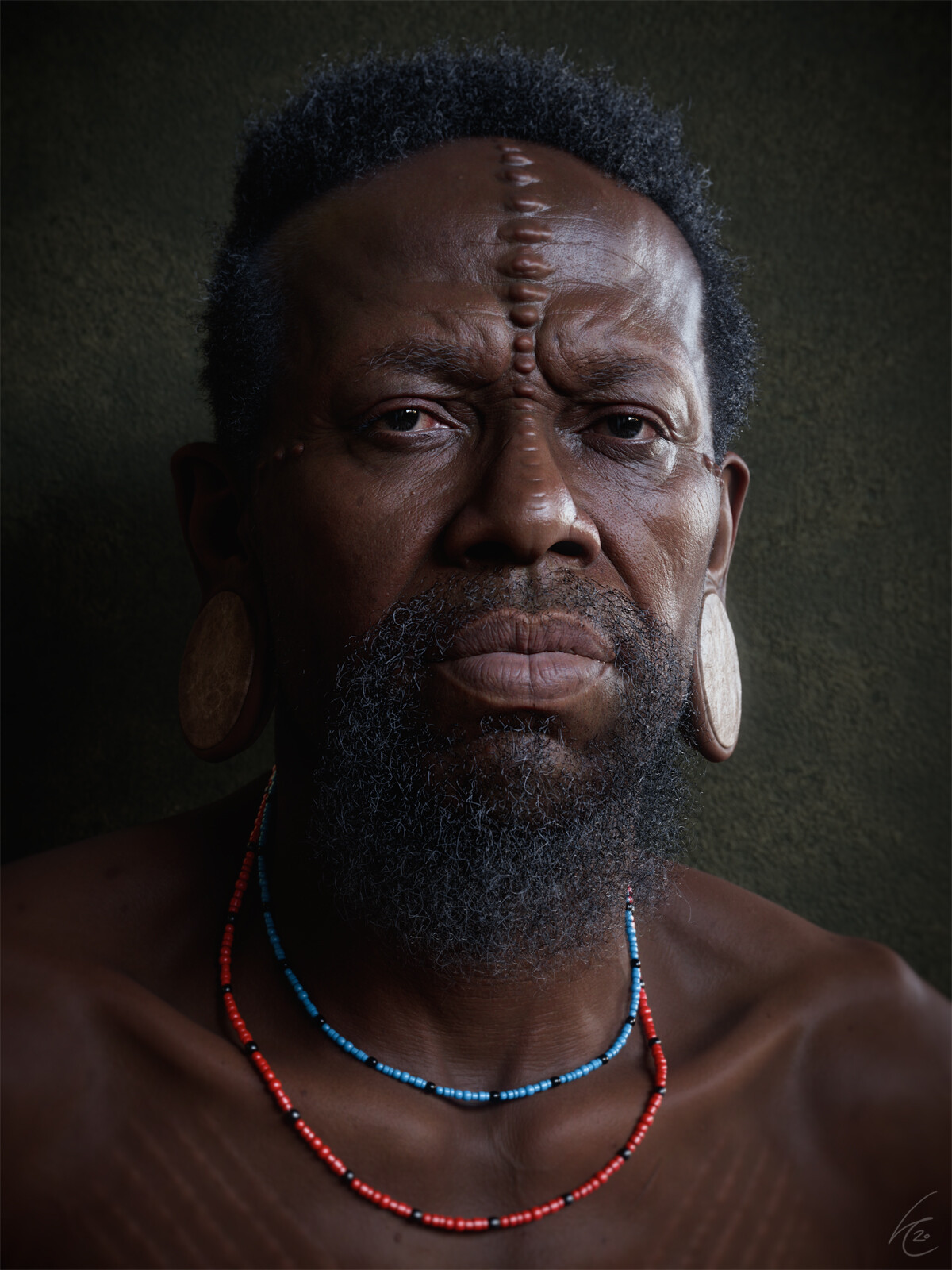 by Antropus
"Out of the three big groups of southern man, the Temoi are the most easily spotted. Main reason being that aside from their imposing size, they also are of a very dark colour of skin. Theirs is perhaps the darkest of all tones found in the known world, ranging from dark brown to outright black, and leading many to call them "Men of Coal". Same goes for their hair, which is rough, often curly and brown at the lightest."   "In size they are the tallest among the southern people, although rarely does an individual reach or even surpass the average Rhomeian. Their backs are broad, their extremities overly long, which many say makes them excellent runners. Faces are round mostly, with broad noses and lips, big eyes allowing for equally strong showings of friendliness and fierceness. A minor, if interesting bit to mention, is that some Temoi show red eyes."


Tale of Blood and Tears


"When you ask about the history of the Temoi, you will usually receive one of two answers. Which one it is will depend on if your counterpart is a Teluani or Temoi:"

"The Temoi will state that in ancient times, his people had forged a powerful and rich Empire in the deepest reaches of the south. Their wealth was such that it drew the envy of the Teluani realm of Teohocan, which invaded and after a long and bloody fight ultimately destroyed the Temoi state. Tens of thousands were dragged north into slavery, those left behind facing starvation and a slow demise in the ashen ruins of their former home."
Mission to Civilize

"A Teluani on the other hand, will claim that when his people encountered the Temoi, they were barely more than apes living in caves, fire and stone tools being their greatest achievement. The Teluani, seeing the potential of this young group, decided to take them in and teach them, showing them the ways of the civilized. In turn, they were betrayed once the Temoi had learned enough, an act fitting of such a cowardly and low people."
"Both answers need to be taken with a large amount of doubt. Few records remain of the most primordial of ages and there are no works created by the Temoi that predate their great rebellion. Assured is only that the Temoi came from faraway lands and that in one way or another, they found themselves enslaved by the Teluani."   "The Great Rebellion, which saw the power of Atzlan crumble, marks the definite begin of Temoi history in the Dawn Age. With the death of their leader, the Temoi found themselves victorious but split on what to do next. Vicious infighting ensued that saw the rebels break into smaller armies under a variety of spiritual leaders:"
Red Bull

"Those following the Red Bull were the most radical and vengeful among the Temoi. Bent on destroying the Teluani to the last, they viciously persecute anyone deemed to hail from that group. Mixed groups do not fare much better, being at best reduced to slave status in Xhetacui, the great bastion from which the descendants of Red Bull rule to this day. I cannot help but see a certain irony in this. History does often seem to rhyme."
Grey Crane

"More peaceful are those that claim to uphold the original teachings of the Obsidian Butterfly. They too desire to remain independent from the Teluani, yet they do not hold the same murderous grudge as the followers of the Bull. Coexistence is their goal, with Temoi standing equal to the Teluani. However, they are not above using force to achieve their ambitions, how they treat others seemingly changing with the seasons."
The Others

"If I were to describe all the various minor movements of the Temoi here, I would have filled a hundred tomes and not be finished. Since the time of the rebellion, many new movements have risen and fallen, ranging from violent radicals to pacifists and everything in between. Which way a ruler follows can change by the day, making the political landscape of the Temoi realms an ever-changing mess of alliances and rivalries."
Modern Age
"At present, the Temoi-led realms occupy almost all lands between the Efesana and Hydyan rivers, save for the south were the Cozamatli dwell. Like the Teluani, they are divided into a multitude of city-states and wandering tribes, some commanding more authority than others. Most are ruled by either kings, chiefs or lords of various other names. The city of Xhetacui in the far east, is currently the dominant power and rumours suggest that its kings are building up a coalition to wage war upon the Teluani states of the central river valley."


"Faith as we know it is not a thing among the Temoi. There are no deities ruling from beyond the skies, or powers that dreamed the world into existence. A better way to describe it would perhaps be a mixture of philosophy and spirit worship:
Unseen

"The Temoi believe that each and every thing in existence, be it creature or plant or stone, has a spirit that will remain in the world even when the body has perished. These spirits live among us, although normal humans are rarely able to see them. Should a spirit grow angry or resentful, it will make itself noticed, potentially causing disaster in the process. To calm it, a series of rituals and incantations are needed. Only the Isali, the "Speakers", are able to communicate directly with these entities and as such enjoy a high standing in Temoi society. Ordinary people are able to invoke the spirits of the dead if lucky enough, granting them boons such as strength or willpower depending on the spirit."
Unspoken

"Next to the spiritual presence which forms the base of Temoi worldview, there are a series of strains of thought. For much of their history, Temoi culture has been primarily oral giving the spoken word much greater weight. A charismatic preacher could easily have formed a set of ideals that endured the millennia to this day, and many have done so. These philosophies are not the same as the canon of our faiths, rather a lose amalgamation of virtues and sins. While people who follow the same figure will often congregate to talk about their ideals, there are rarely two Temoi with exactly the same values. Some have called them "The People of a thousand Faiths" due to this which, while not entirely accurate, does fit."
"Another name given to the Temoi is "People of a thousand Clans" for in few other societies does the family form such a core part of existence. The loyalty of a Temoi is first to his family, second to his clan, third to his community, fourth to the spirits and last, if ever, to the realm. A wide variety of unique characteristics develop from this, such as businesses, military units or work groups being entirely organized along family lines."   "It also makes their realms very flexible, in a sense. Civil war seems almost constant, yet it is rare for a realm to collapse or even severely weaken due to this. It is common to see a Temoi state tear itself apart for years, then suddenly reorganize and launch major campaigns. The Temoi are an interesting group, full of contradictions all irrevocably fused with the very identity of the southern world. What I am trying to say is that if Rhomeia is to act and treat in these lands, it has to carefully consider each of the major components at work here."

Treating these people like one mass of southerners will only bring disaster. Let greed and arrogance rest for once and think before you act.
— Gaeus Neis Otero, first line of his report 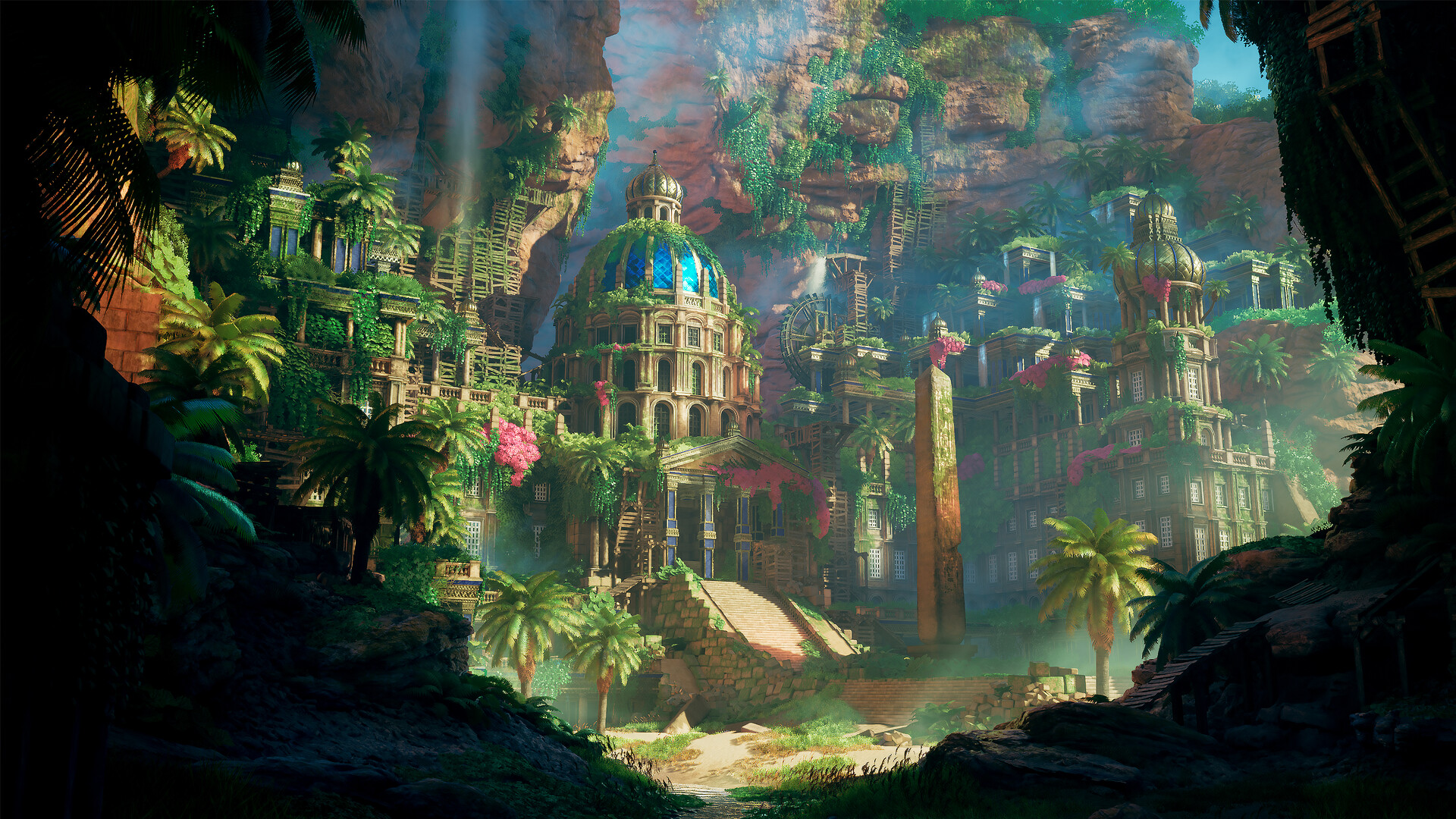 by Miha Maruško
Xhetacui - Bastion of the Free
"Rising above the roaring copper waters of the Hydyan, is a veritable mountain of reddish stone. A chaotic mess of towers, gatehouses, walls and barricades, all adorned with bleached skulls that are covered in strange symbols.   This is Xhetacui, greatest bastion in the Far South and center of Temoi culture. Supposedly the capital of an old savage tribe that emerged following the fall of Theoucan, it became the seat of the Red Bull and the greatest asset to his cause.   From here, Kings and Warlords have conquered the far reaches of the Hydyan and eternally protect eastern Inferra from the savage tribes of the wastelands beyond. How much blood has been shed on those walls can only be guessed."


My ancestors have held these walls for a thousand generations. I will not see their memory dishonored today.
— King Ane'dwo, Great Siege of Xhetacui

Tower Settlements
"While many Temoi live either in small villages, towns or travel the land as nomads, a larger part has developed a very unique way of accommodation: tower settlements."   "From a wide base, which contains the stables and work stations, they rise up to fifty meters into the air, their form that of an obelisk if you had cut off the very tip."   "Each tower is owned by an individual clan or family and built to serve as a fort in times of crisis. Sanitation is dealt with via an complex system that seems to be off combined Teluani-Rhomeian design, an ancient remnant of both civilizations perhaps."
A most unpleasant Society
"Such is the description given to me by a Rhomeian trader that had managed to reach the Temoi before me. And it is one I can not entirely disagree with. It should be noted that the Temoi do not share several of the ideas Rhomeians have on things such as class, age or how men and women should act."   "Women, elderly and all those deemed "weak" are usually either treated as objects or neglected outright. The details depend on individual tribes and families, of course. Temoi society is intensely martial, with special focus on the prowess of the individual. The less one can contribute in the fields of contest, be they strength or wit, the lower their position in society."   "There are of course the ever present limits to such ideology, every state has need of those that lack martial prowess. Nevertheless I would advise against sending any ambassador that is female, over a certain age or below a certain physically capability." 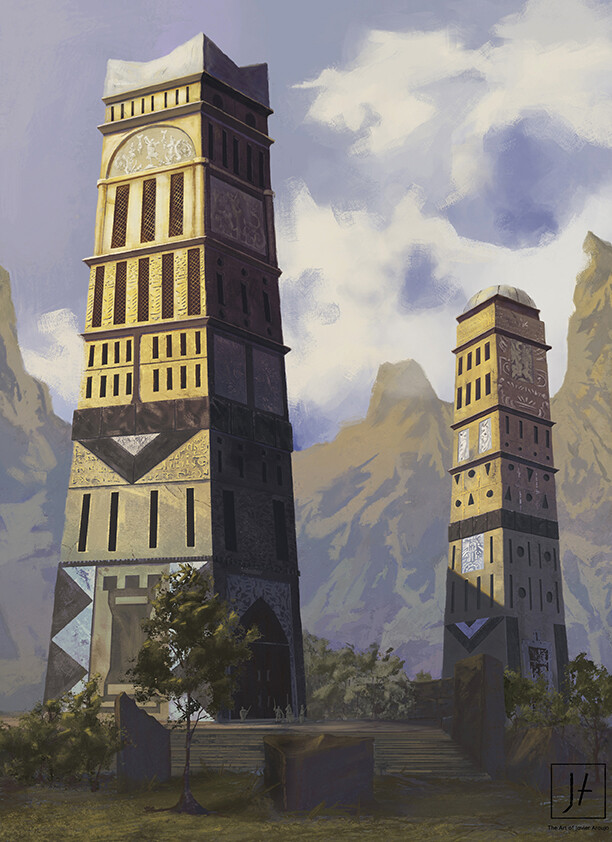 Love how you've made sure to include the Teluani perspective here!

Great Article as always. A well deserved Like.   Aemon

Great article. I love how you combine diversity with shared characteristics for the Temoi! That really gives live to the impression you paint of them.