I can assure you that these lands hold boundless opportunity for discoveries and profit. But beware for it holds an equal number of ancient grudges and deadly pitfalls.
— Gaeus Neis Otero, Rhomeian Explorer

"...Never could I have imagined that I would one day be credited with discovering...well, rediscovering a continent and its people. That it would be my words that introduce a whole new civilization to the world, the ways in which it differs and yet...seems hauntingly familiar in some respects..."

Beyond the Green Wall

"Akin to the mighty bastion of ancient Rhomeia, the green walls of Inferra rise over 70 meters above the foaming waves of the Great Divide. Massive trees with barks stronger than iron, fused into one another and the cliffs that jagg out into the air. It is a wall of wood and stone, hazardous to climb and impossible to circumnavigate, for it runs along the width of the far south, from the furthest savage reaches of Anidara into the great unknown beyond even Last Haven. Until now it was this wall that has kept the curious from these shores."   "Merely an hour south from Rhomeia Australis there is now a massive hole, spanning easily thirty galleys in length. Some sort of calamity seems to have caused this, breaking the earth and forming a bay for the waves and now the ships to enter. On the other side of this bay emerges the sprawling city of Boreanas or as the natives, the Teluani, call it, Xhonoco. It is a young city, founded amidst a series of lakes. A city of elegant wooden structures and floating gardens. A city that has grown wealthy of the trade going south on the great river they call Efesena."

Along the Kraken's Arms

"As powerful a band of water as the Kefran in Scetia or the Sirryn in Vardania, the Efesena crosses Inferra in its entirety. From its source in the Spine of the Great Serpent, through the highlands of the south and the thick jungle of central Inferra until it finally throws itself down into a yawning pit near the Acahoco, the green wall that surrounds this land."
Bones and Chains

"From the western bank of the Efesena till the roaring waters of the Divide, the Anhua'lura or "Chained Lands" stretch. Dense jungle undercut by a myriad of smaller streams and lakes covers the land as far as the eye can see. With one massive exception: akin to a scorch mark in the fur of a stray dog, lies a near circular expanse of fields and plantations. These lands surround the great city of Heocan, the Bonehold, and are cultivated by its many vassal tribes, known as Tlanyahuati or "Bowed Ones". Some claim that there are more slaves in this one place than anywhere else under the sky."
Dust and Iron

"Further to the south begins the Teaya'lura, the Lands of Iron. From the seemingly endless jungle emerge the mountains of the Spine of Colhi and the rugged, red-dusted highlands they shield. Somewhere within this expanse tormented by dust storms, lies the Hidden City of Colhucan. Iron and copper in impossible quantities stream from the earth here and the land is littered with mines and smelter huts. It is a land rich in metal but poor in anything else. The people there continue to persist, however, and their forges fuel Inferra's wars in exchange for all manner of other produce."
"The Efesana effectively divides the land into east and west, serving at the same time as the main centre of Inferran civilization. Fertile earth lines both sides of the river and nowhere is farming easier than within the streams many-armed embrace. Although claims that "over a hundred thousand cities" sit along the main river alone can be discarded as fantasy, there is no doubt that a majority of the southern people seems to dwell in its vicinity."
Lands of the Unchained

"Going east, the land becomes more rugged, the jungle less dense. This is a land of spice and fruit, home to a fierce people known as the Temoi. From their fortress on the far eastern river Hydyan, they rule all lands of the east and often lie in savage conflict with the people of the central river valleys. Conflicts seemingly based on race as the Temoi largely target those of Teluani descent and spare those related in some way."
The Eastern Wastes

"Beyond the Hydyan lie the Eastern Wastes. The borderlands where the far southern fringes of Anidara meet the first stretches of Inferra. According to available sources, it is a savage land of ruined cities and barbarous tribes stranger than even the most remote jungle dweller. To keep the dangers of the wild from spilling into Inferra, the Temoi keep a large number of men under arms on their eastern border."
Serpent's Eye

"Often counted among the eastern lands, the Serpent's Eye is the heart of Teluani civilization. A vast lake created by several of the Efesana's arms it holds the floating metropolis of Teoktila, a city so gargantuan it may even surpass Rhomeia in terms of population. All manners of culture flourish here, the city's God-Kings holding extravagant feast to appease the people and honour their gods."


Of Sun and Rain 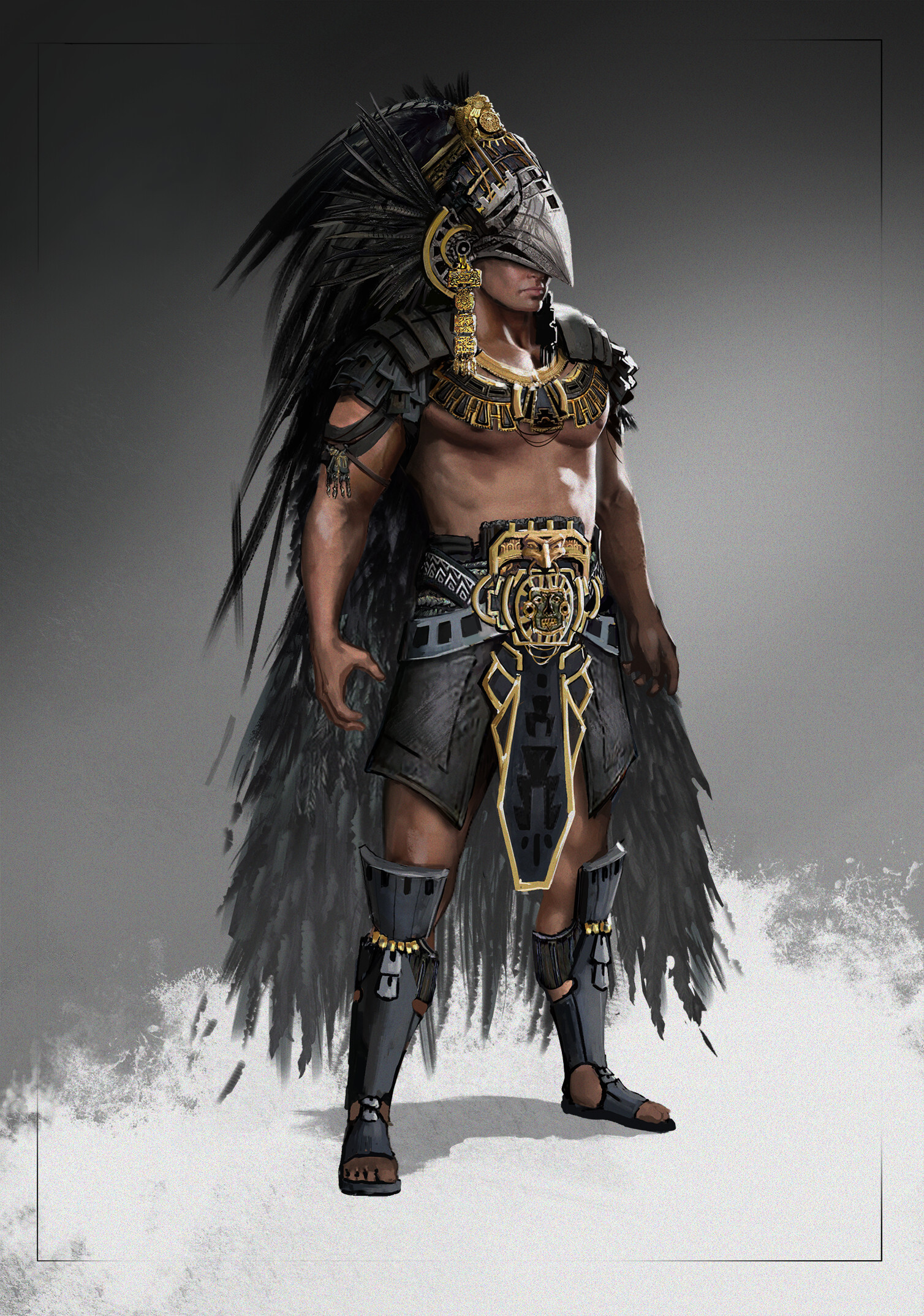 by Aleksandra Skiba
"Akin to other lands in the far south of the world, Inferra enjoys a climate best described as alternating between warm-dry and warm-wet. The hot winds that bring summer to Anidara and Vardania are especially strong here and they determine wherever the land has entered dry season or rain season."   "Early in the year, the air remains dry and mild temperatures dominate. This changes as the year advances and toward the month of Iunis the heat rises to almost unbearable degrees. Shortly after, the first bands of rain bearing clouds appear and announce the beginning of rain seasons."   "The next three to four months are filled with rainstorm after rainstorm and deliver so much water that one may think the earth itself could drown. Only slowly do the clouds grow thinner and the raindrops scarcer until dry season fully enters again around the turn of the year."   "An exception to this are the lands behind the Spine of Colhi. The mountains not only protect the lands from northern aggression, they also ward off the rain bringing clouds. Wind is not halted, however, and quite often it will blow vast clouds of dust down from the highlands of Colhucan and onto the rainforests of the river valley."

"Should one travel further toward the great mountains of the south, they will find the rainforest grow sparse and the land rise higher and higher. Eventually, all they will see is wide open grassland that later morphs into the foothills of the Dawn Wall. Subject to sharper mountain winds, the highlands do not see the same amount of rain as the north. These lands, high above the jungle of the north, are home to wandering tribes known as Cozamatli, who do not possess cities and instead follow their herds across the highlands. With tools forged from bronze they at times descend into the river valley to raid and plunder."

by Jaime Jasso
"Inferra does not seem to end in any stark way like Vardania or Anidara. Instead it just runs further and further south along the Great Wall of Dawn. Beyond the dusted lands of Colhucan begins a veritable ocean of green. A jungle so dense and primal that few dare venture into it.   Some claim that it is a land of eternal darkness for the trees grow so tall and thick that no light ever reaches the ground. Ancient tribes of Man dwell there, primitive in every sense of the world. The Cuauhneuctli are said to be cannibalistic demon worshipers without sense for any form of civilization."

Further beyond? For all I know there may come the end of the world itself. The realm of demons and worse.
— Gaeus Neis Otero 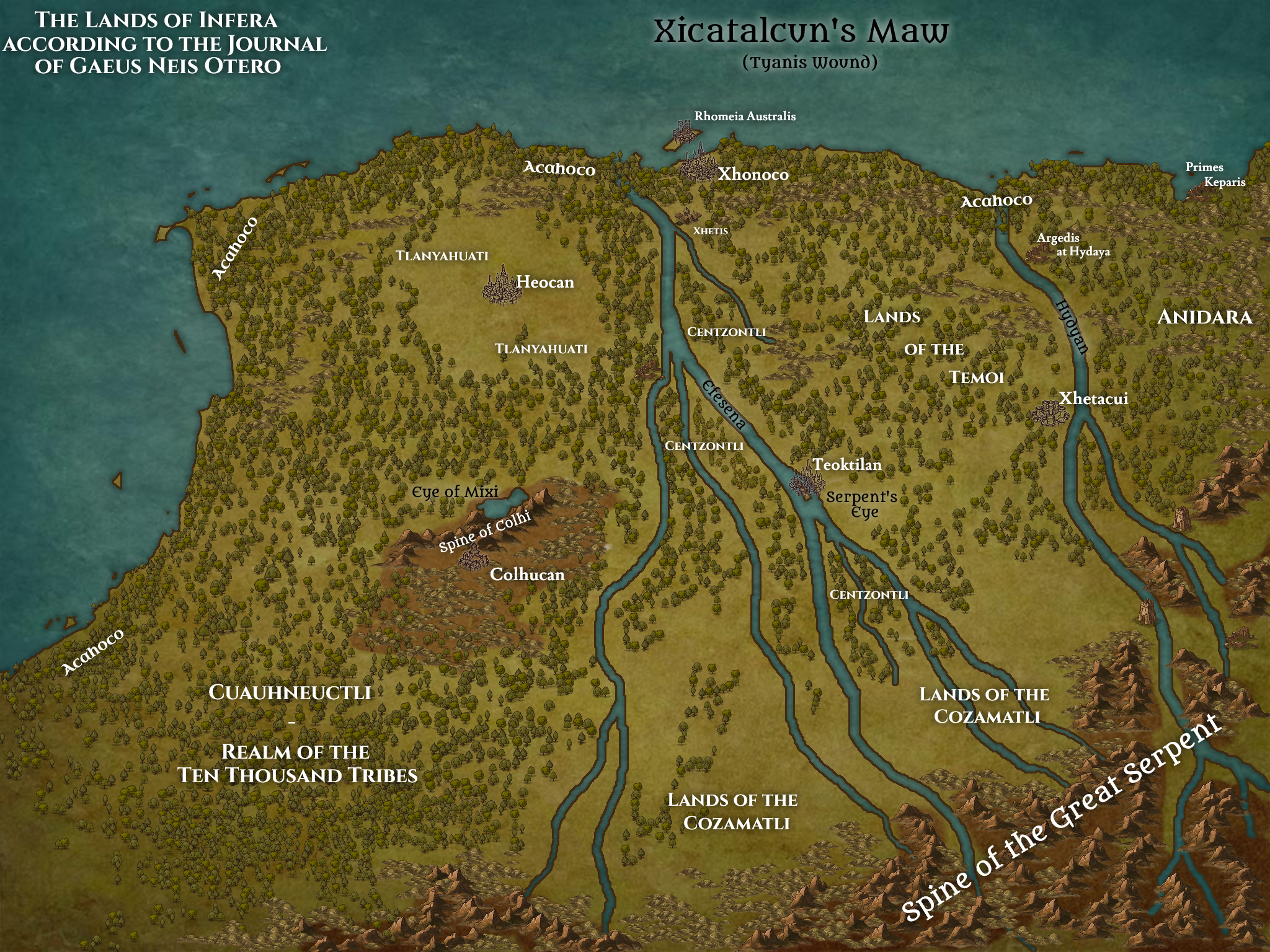 by Darkseid
Gaeus Neis Otero (3247-3331 DA)
Originally merely one of many officials within the bureaucratic apparatus of the Eternal Empire, the rank of Epistratos of Rhomeia Australis is attested to him since 3287 DA, he gained fame world-wide for being the first person to "rediscover" the old Inferran civilization. In 3295 DA, he was given the rank of Praecon to enter into formal diplomatic relations with the various southern states.   From 3193 on, he undertook a total of fourteen expeditions into Inferra and the resulting documents give great insight into the lands, cultures, and politics of the Far South. Otero tried his best to mediate between the interest of his Empire and the sensitivities of the Inferran nations, which he came to respect greatly over the years. For over two decades he shaped relations between two worlds and his death in 3331 marked the end of an era. It is not quite certain what his successors are planning to do.

by Alexander Sköld
Every City a State
"Unlike the nations of Vardania or Scetia, the Far South does not know expansive kingdoms and empires. Most realms consist of collections of city-states and their immediate vicinity, all paying tribute to a single hegemon. They do not cover large amounts of ground but are more like nets or constellations as rivers and a smaller number of roads are the only connections between them."   "In war, these are viciously fought over as they are the only connection many cities have to the wider world. One exception is the realm of Heocan, which is made up from a series of enslaved tribes that form a ring around the previously named city."
Remnants of Glory
"Throughout the largely tree-less grasslands inhabited by the goat herding Cozamatli, there are accumulations of ancient stone. The Teluani regard them with reverence, the Temoi with revulsion.   After delving into Inferran history, I have come to the conclusion that these ruins must have belonged to the ancient city of Atzlan. Like Tarquinnia in Vardania, it was a daughter of one of the great civilizations of old and like her northern sister it survived the chaos of Oblivion.   For many years it held brutal sway over the far south, until a titanic rebellion, in which the modern Temoi find their origin, brought it down. The highlands were largely abandoned in the aftermath until the Cozamatli moved into the area. The exact location of the main settlement is lost but going by the density of ruins it seems like it can be found deep within this southern sea of grass." 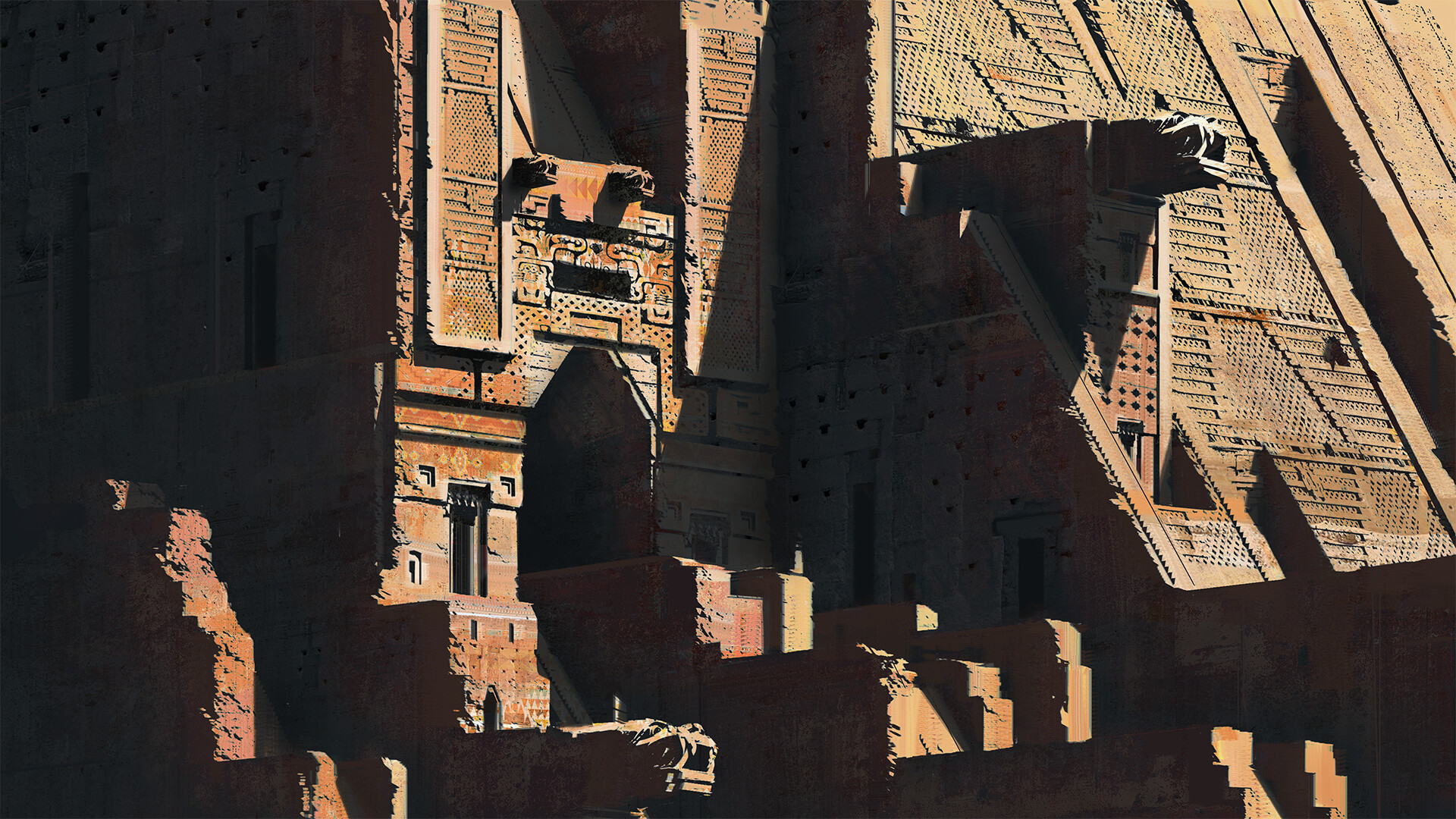 'With one massive exception: akin to a scorch mark in the fur of a stray dog, lies a near circular expanse of fields and plantations.' Aaahh, the language and description in this article is amazing. I particularly like how you describe the river.

I really like the descriptions. The wording and language just guide me along the text and make it hard to stop reading! :D